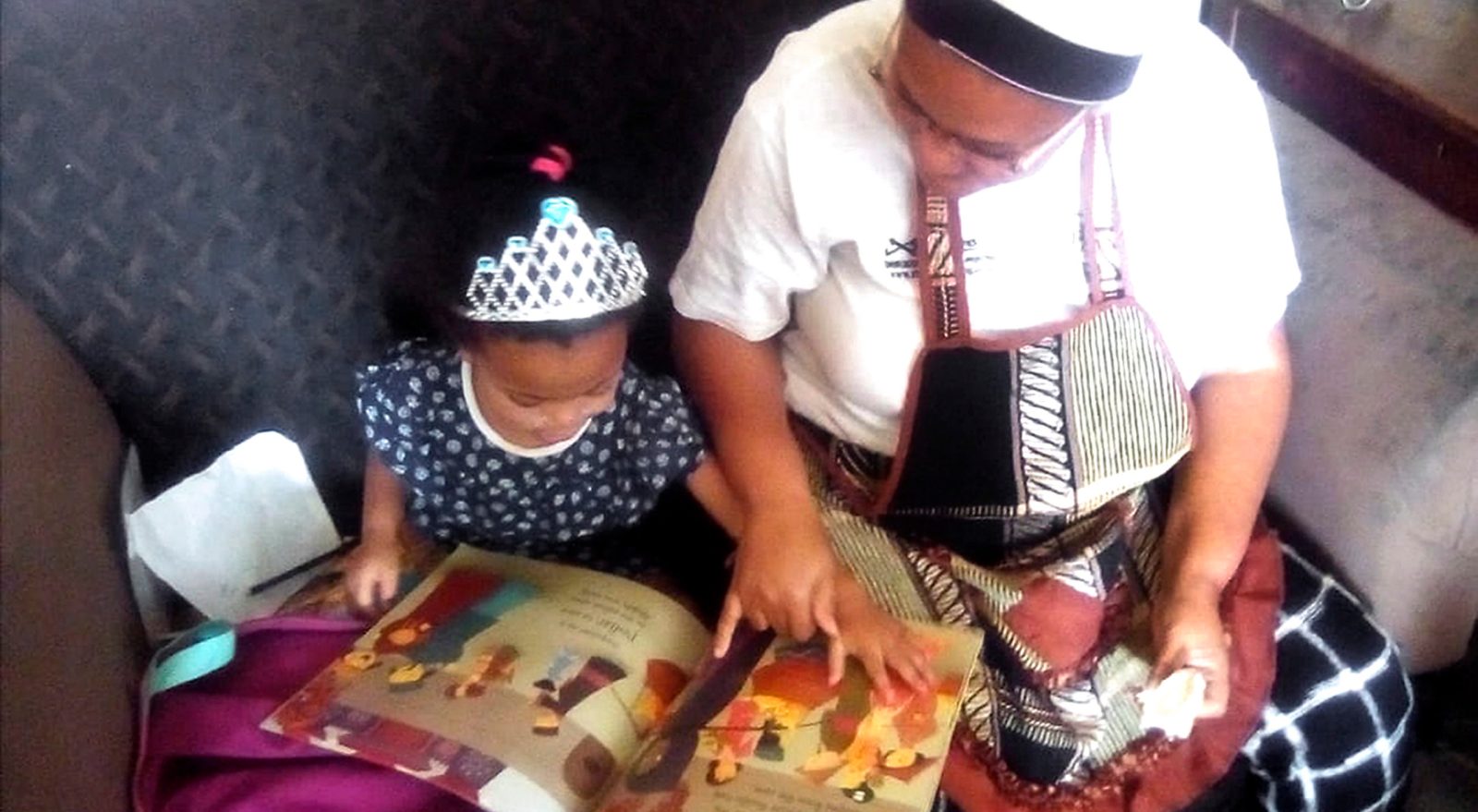 A granny in Vergenoeg shares a book from the 2020 book packages with her granddaughter. (Photo: Kaylynne Rushin)

The ‘20 Books in 200 Homes in 2020’ campaign supports a culture of reading in homes for children during their early development. Cathy Gush and Anneliese Maritz are the devoted coordinators of the project for the Lebone Centre, a Makhanda NGO which supports vulnerable children’s early childhood literacy and development.

The heat bears down on Sun City, Makhanda, as a white car emblazoned with the Lebone Centre’s logo crawls along the rutted, filth-strewn street. Three people, in matching red shirts, heave cardboard boxes alongside the vehicle.

A rubbish dump forms the precarious foundations of this Sun City. Tin shacks and crumbling walls provide shade for dust-streaked children and their scrawny dogs.

As the car makes its way through the community, faces appear at the windows and curious children gather in their yards.

Every couple of metres, the Lebone convoy is called to a halt, and a Ziploc bag of shiny books emerges from one of the cardboard boxes, to be passed into the waiting hands of a grinning child. The red-shirted staff might as well be Santa Claus’s elves and the ziplocked books their treasured gifts.

The “20 Books in 200 Homes in 2020” campaign supports a culture of reading in homes for children during their early development. Cathy Gush and Anneliese Maritz are the devoted coordinators of the project for the Lebone Centre, a Makhanda NGO which supports vulnerable children’s early childhood literacy and development.

The Lebone Centre serves as the organising hub, where the book packages are curated to be sent out to homes in the surrounding communities of Sun City, Ghost Town, Scott’s Farm and Vergenoeg.

“Our vision is for families and homes in a particular area to have reading and writing material that enables them to reap the benefits of books in homes,” says Gush.

The 200 families in question comprise 20 aftercare programme pupils and 28 preschoolers from the Lebone Centre, and another 152 families in the area.

Gush and Maritz were inspired to co-direct the “20 Books” initiative in Makhanda by a presentation at the 2019 Literacy Association of South Africa Conference about an international longitudinal study led by Mariah Evans, an associate professor at the University of Nevada.

The researchers found that having as few as 20 books in the home is a tipping point for propelling a child to a higher level of education. The benefits accrued regardless of family income, socio-economic status, or literacy levels. The more books children own, the greater the benefit.

Further inspiration came from Dolly Parton’s Imagination Library, which donates one million books to children around the world every month.

Lebone delivered two consignments of books before the Covid-19 pandemic hit. Once lockdown regulations eased to Level 1, the centre was once again abuzz with preparations to deliver the next three sets of books before the end of 2020. Each package consists of four new books, selected to be age- and language-appropriate.

So far, the team has delivered 2 400 books over four separate book drops. In mid-October, the Lebone staff fought the heat to distribute a car-load full of books to families in the Sun City surrounds.

The smiles of the recipients proved the trip’s worth and the staff are planning one final drop before year-end. Gush and Maritz look forward to expanding “20 Books” beyond 2020.

“But, perhaps it will have different iterations, such as a mobile library,” says Gush.

“20 Books” does not have any specific funding, but the diverse book packages were made possible through generous donations of new books. Book Dash, Nal‘ibali and Biblionef donated local South African storybooks, while the DG Murray Trust donated 10 000 English books sourced from Books for Africa in the USA. Funds from other Lebone Centre sponsors, such as the Van der Meer family in the Netherlands, were also used towards the project.

The campaign addresses the disturbingly low level of literacy in South Africa. In 2016, the Progress in International Reading Literacy Study assessing children’s reading comprehension placed South Africa last out of 50 countries. It showed 78% of Grade 4 pupils in South Africa could not read for basic meaning in any national language – a statistic that the campaign team is hoping to change, one book drop at a time.

Gush believes that the relatively small project will have an effect on literacy rates in Makhanda.

During the lockdown, many schools turned to digital technology for teaching and learning support. Yet this has proved unviable for the vast majority of South African youngsters.

“As much as technology is real and helps hugely, as we’ve experienced during the lockdown, our people in the community don’t have phones that can access those types of digital educational resources,” says Maritz. “When you are fighting to survive, you’re not buying airtime and data.”

Physical books are still essential. “In communities like these, where people do not have the income to buy books, it is very special. There is almost this hunger for it,” says Gush. “Children need the complete, tactile experience of books. It’s not just about accessing something to read; it is also about ownership of a book.”

During the October book drop, most of the book packages were received with a giddy sense of pleasure – each recipient looking simultaneously thrilled and unsurprised by their package.

Kaylynne Rushin and Anthea Davies have not only been a vital help to the campaign but are also parents whose children have received book packages.

Rushin’s eight-year-old daughter received one and chose to share it with her two sisters, aged two and 10.

“She was so overjoyed and over-the-moon when she received the book package that she decided to open her own library,” explains Rushin. “I really believe that this one book package will help all my children prosper in their education, especially their reading, literacy and language skills.”

Some of the book packages are targeted at children who are part of the aftercare programme, which happens on-site at the Lebone Centre, but this does not stop many of the children from sharing their books with their siblings.

Davies’ three children practice the “sharing is caring” mantra. “They were so happy when they realised that they were receiving a book package. I told them to choose one each and look after it,” says Davies. “My little one is always asking me to read to her, and she can never contain her excitement when she sees more books being delivered.”

Both Davies’s and Rushin’s responses highlight the joy and value that these books have brought into their children’s lives. Many people have been positively affected by Lebone’s work. Even under the pressures of the global pandemic, the 20 Books initiative has made communities smile – one book closer to a brighter future. DM/MC