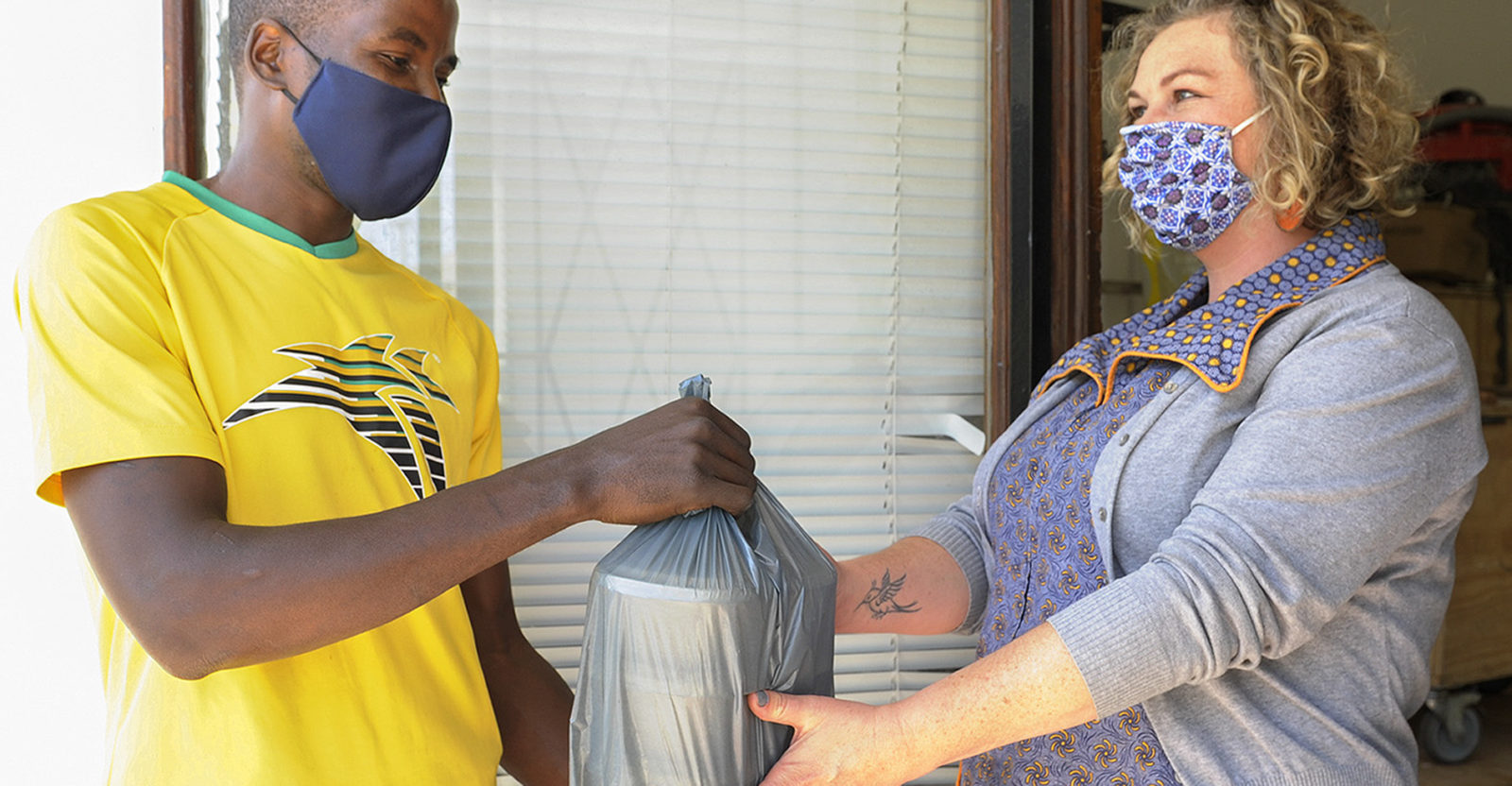 Solmon Chikafa deilivers samosas to one of his customers, Melany Bendix from Muizenberg. (Photo: Joyrene Kramer)

Covid-19 has mostly been about bad news – death, unemployment, lockdown and so on. However, as some people saw their income dry up or being suspended, they became creative and found a new way to survive. This week we tell a few of these stories: The second, is about how samoosas became a lifesaver for a top chef.

At Malawi’s four-star Ufulu Gardens Hotel, chef Solmon Chikafa learnt the magic of blending flavours such as cumin, coriander and fresh chilli. Under the mentorship of an Indian chef named Daas, Chikafa perfected the art of making aromatic samoosas.

These samoosas became Chikafa’s life raft when the Covid-19 lockdown began in South Africa in March, sending his bright hospitality career crumbling. It has helped him afford rent and pay school fees for his seven-year-old son Ryan.

The 38-year-old chef is married to Medriane Kaunda, a domestic worker. Their other son, Theo, is three.

Cooked in Chikafa’s Muizenberg kitchen, he is confident that his samoosas are the best. Popular flavours include chicken, peas and coriander, caramelised onion and feta, and mushroom and lentil.

“I have tasted many samoosas here in South Africa,” Chikafa tells DM168. “I tried many samoosas in shops and restaurants. But I knew mine was much better. The difference is the spices. I believe he who taught me to do it, Daas, he knew best. I trust him.

“So I posted my products on Facebook, and the orders started coming in. Soon there were more orders than I could afford ingredients for. Luckily money started streaming in too. The people who tasted it, they were like: ‘These are the best samoosas we’ve ever had.’ This one lady from Rondebosch helped me with PDFs to promote the business.”

Chikafa’s Facebook page – called RYT Bite Kitchen Studio – features photographs of his crisp-golden delicacies, selling at R45 or R50 per dozen. He explains that he picked the name RYT Bite for his business, as the ‘R’ and ‘T’ in RYT are the initials of his sons.

Chikafa moved from the Malawian capital of Lilongwe to Cape Town in 2015, to join a friend’s catering business. Later he was junior sous chef at The Cellars-Hohenort Hotel in Constantia, where he whipped up stand-out dishes such as vegan beetroot steak.

Chikafa resigned from the hotel in February. About to start work as a chef on an American cruise liner, he travelled three days by bus to Lilongwe to arrange his American visa. But when he returned to Cape Town on 18 March, his dreams were dashed.

“Countries were starting to close down,” he recalls. “Then, on 26 March, lockdown started. It felt like everything was just falling apart. I had no job, I had no money.

“I have a friend who is in America right now. He is a university lecturer; we were at school together. I asked him: My brother, I have no food for my kids. I have spent everything on the visas. So he sent me R3,500 so I could pay rent and buy food for the kids. With the money left over – it was R500 – I started the new business.”

Born and raised in Lilongwe, Chikafa is the first certified chef in his family. “My grandma, she used to like cooking very much, but she never trained. I found some of the books she collected; I have some of them still. She would bake cakes and bread. One of my favourite recipes from her was a pumpkin pudding; she also had a chocolate cake recipe which I still use today.”

After school, aged 17, Chikafa studied hotel management and catering at the Skyway Institute of Management Research and Development in Lilongwe.

He further honed his craft at Ufulu Gardens, over seven years. “The owner wanted to put his hotel on the map, so he had expertise from around the world, including Daas and a chef named Jerome from South Africa. Jerome and I worked together for two years. He helped me a lot, got me inspired. He exposed me to chefs like Gordon Ramsay, we watched recipes on YouTube. He saw I was good and later invited me to work with him in South Africa.”

At present, Chikafa sells 20 dozen samoosas around the Cape Peninsula a week – sometimes more, depending on orders from his retail client, the OK MiniMark in Hout Bay. Most of his spices are from local markets in Muizenberg and Tokai, with meat from a halaal butcher in Grassy Park.

“My story is not a sad one,” he says. “It is not one to try to stir up pity for me. I have learnt what it is to succeed.”

Politely Chikafa draws the interview to a close. It’s time to pick up Ryan from school. After that, his afternoon will be spent over simmering pans, stirring coriander, onions, potatoes and peas. DM/MC

Daneel Knoetze for Viewfinder
Save 6 mins