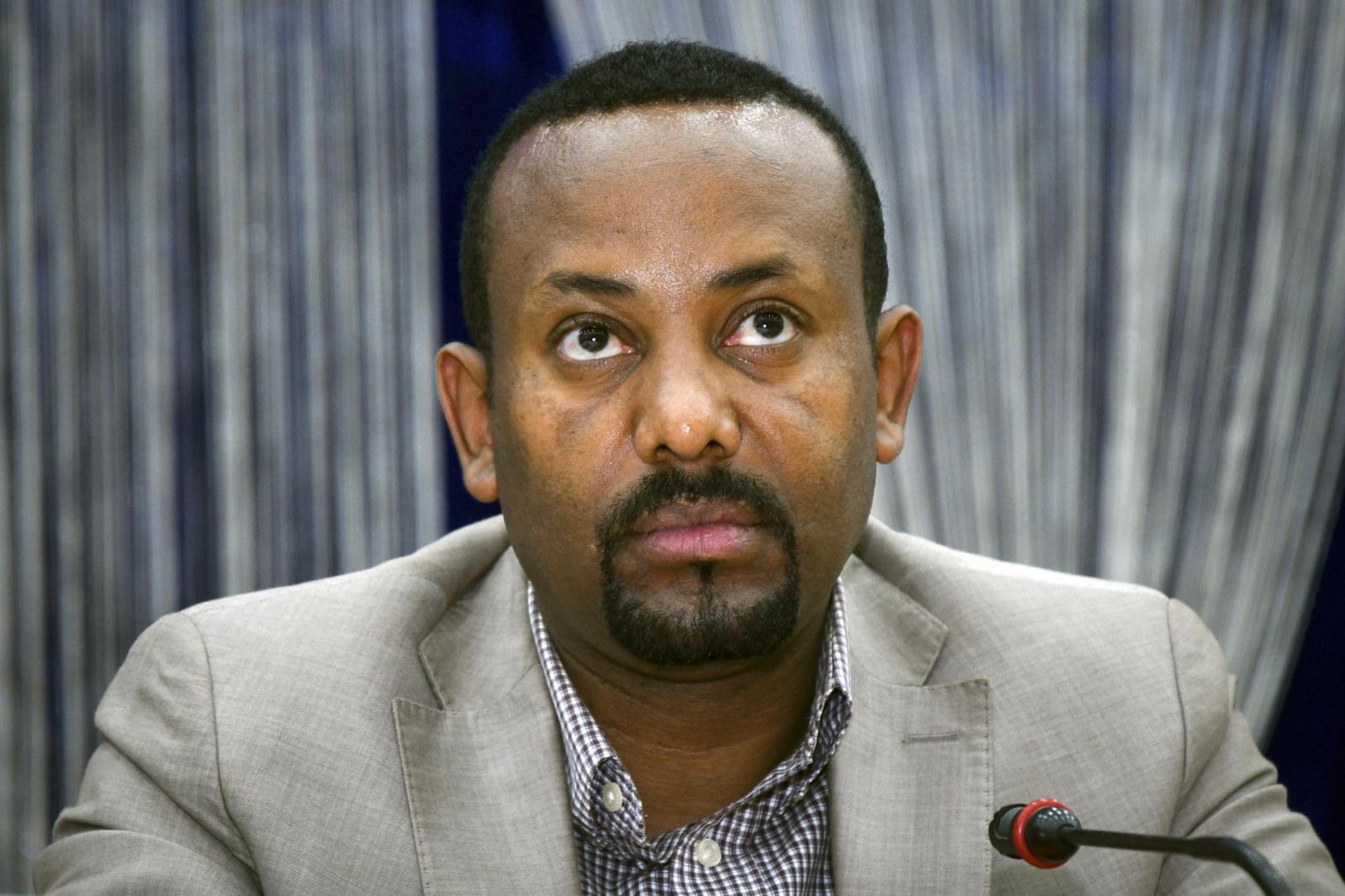 (FILE) The then leader of the 'Oromo Peoples Democratic Organization' (OPDO), now Prime Minister Abiy Ahmed looks on during a news conference in Aba Geda, Ethiopia, 02 November 2017 (reissued 23 June 2019). Ethiopia’s Amhara state leader Ambachew Mekonnen and his adviser were killed during a coup attempt in their state that was orchestrated by its top general, according to reports 23 June 2019. EPA-EFE/STR

GONDAR, Ethiopia, Nov 9 (Reuters) - Ethiopia's Nobel-winning leader said on Monday his nation was not descending into "chaos" despite a military offensive against the restive Tigray region where air strikes and fighting have killed at least half a dozen people in recent days.

The flare-up in the northern region bordering Eritrea and Sudan has brought fears of civil war in Africa’s second most populous nation where ethnic conflict has killed hundreds since Prime Minister Abiy Ahmed took over in 2018.

“Ethiopia is grateful for friends expressing their concern. Our rule of law operation is aimed at guaranteeing peace and stability once and for all by bringing perpetrators of instability to justice,” he tweeted on Monday.

“Concerns that Ethiopia will descend into chaos are unfounded and a result of not understanding our context deeply.”

The 44-year-old, who is the continent’s youngest leader, won the Nobel Peace Price last year for democratic reforms following years of repressive government and for making peace with Eritrea after a border war that had killed tens of thousands.

But the conflict in Tigray threatens national stability.

Last week Abiy, who comes from Ethiopia’s largest ethnic group the Oromo, launched a military campaign saying forces loyal to Tigrayan leaders had attacked a military base and attempted to steal equipment.

The Tigrayans account for just 5% of Ethiopians but had, before Abiy’s rule, dominated politics since rebels from their ethnic group toppled Marxist military rule in 1991.

Federal government fighter jets have in recent days been bombing targets including arms depots in Tigray. Aid workers on Sunday reported heavy fighting between troops loyal to each side, with at least six dead and dozens wounded.

A military official in Amhara told Reuters that clashes with Tigrayan forces in Kirakir, near the border between the regions of Tigray and Amhara, on Thursday had killed dozens on both sides. Reuters was unable to verify that.

Forces of the Tigray People’s Liberation Front (TPLF), which governs the region, are battle-hardened – from the 1998-2000 war with neighbouring Eritrea and from the guerrilla struggle to topple Mengistu Haile Mariam in 1991.

They and militia allies number up to 250,000 men and possess significant stocks of military hardware, according to the International Crisis Group thinktank.

Tigrayans say Abiy’s government has unfairly targeted them as part of a crackdown on past rights abuses and corruption.

“These fascist have demonstrated they will show no mercy in destroying Tigrayans by launching more than 10 air strike attempts in Tigrayan cities,” the TPLF said via Facebook.

“The people and government of Tigray are standing together,” it added in the post on Monday.

Abiy, a former soldier who fought alongside Tigrayans against Eritrea, has so far defied calls from the United Nations and others to negotiate.

One risk is that Ethiopia’s army could split along ethnic lines, with Tigrayans defecting to the regional force.

There are also fears of reprisals against Tigrayans elsewhere. Addis Ababa police said on Sunday the government had arrested 162 people in possession of firearms and ammunition, on suspicion of supporting the Tigrayan forces.

Thousands have had to flee their homes in the last two years in the nation of 110 million people.

Analysts do not believe the clashes will reawaken the Eritrea conflict given that President Isaias Afwerki and Abiy both see the Tigrayan leadership as enemies. ​

All-out war would damage Ethiopia’s economy after years of steady growth. Abiy has pledged sweeping reforms to open lucrative sectors such as telecoms to foreign investment.