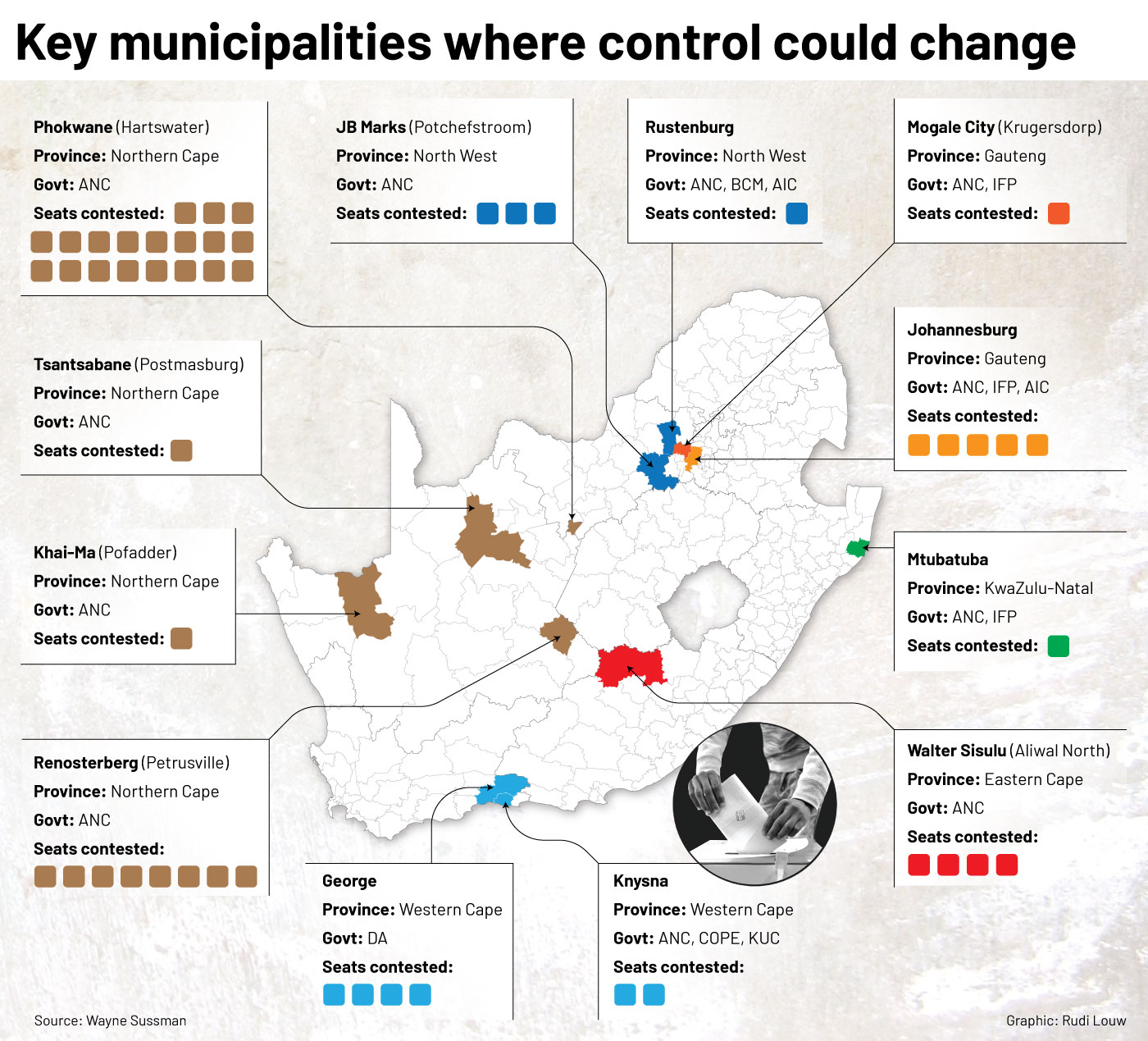 On 11 November the largest number of by-elections in SA ever takes place on a single day: 107 seats are up for grabs in 95 wards. With research by Wayne Sussman.

While many South Africans have been gripped by US elections fever, electoral action on home soil is back with a bang. After seven months, by-elections are returning to South Africa. On Wednesday 11 November the Electoral Commission (IEC) will clear its backlog of by-elections that could not be held during more restrictive levels of Covid-19, providing an unprecedented snapshot into the political mood between national elections.

Holding all outstanding by-elections on a single day would benefit not just the IEC but also political parties, said IEC CEO Sy Mamabolo, as it would enable them to “focus their attention and energies on one day”.

On Super Wednesday, every province will host at least four by-elections, with control of 12 municipalities up for grabs. After a year in which attention has focused overwhelmingly on the ANC and its handling of the pandemic, there are a number of polls that may well serve as barometers of how well the ruling party is felt to have managed the Covid-19 crisis. This could be an opportunity, too, for newer parties to make their presence felt.

“We are confident of taking wards off the old parties,” the GOOD party’s Brett Herron told DM168. GOOD is contesting six by-elections on 11 November, of which the bulk are in the Garden Route town of George. In 2019, GOOD lost a George by-election by just five votes, and in these by-elections has the chance to give the DA a proper scare.

“We believe we will make significant inroads in the Western Cape,” says Herron.

“We are overrun with requests from communities to establish GOOD branches at ward level, with several branches launching every day across the province and the rest of the country.”

The DA has traditionally had good reason to feel bullish in the face of local elections, in which it normally performs better than in national elections. There is bound to be anxiety, however, with new leader John Steenhuisen taking power less than a fortnight before Super Wednesday. After losing more than 200,000 votes to the Freedom Front Plus (FF+) in the 2019 elections, the party will be looking to fend off further encroachment in municipalities such as JB Marks (Potchefstroom South) in North West.

FF+ head of elections Wouter Wessels told DM168 that the party’s polling suggested that victories in Ward 5 in JB Marks and Ward 18 in Emalahleni (Witbank) were within reach. Wessels said the FF+ was not relying on poaching votes from the DA.

“Some of the new FF+ supporters voted DA in the past, but there are also a lot of new voters who did not vote in the past or are only now eligible to vote. We see increasing support in the youth electorate.”

The DA is also facing the prospect of losing wards in Gauteng to the ANC, which underperformed in the 2016 local government elections. Super Wednesday offers the ruling party the chance to regain ground lost in those polls – but much depends on how the public assesses what has happened over the course of the annus horribilis 2020, and whether the sheen on President Cyril Ramaphosa’s New Dawn has faded.

The ANC will be most vulnerable in the municipalities of Knysna in the Western Cape – which the DA could re-take with a coalition partner – and Renosterberg (Petrusville) in the Northern Cape, where it is also vulnerable to the DA. The country’s most sparsely populated province will have the most election activity on 11 November, with 8% of all Northern Cape seats up for grabs.

Two of the Northern Cape elections are particularly consequential: in Renosterberg and Phokwane (Hartswater), where both municipalities have been dissolved. These are traditional ANC strongholds, but this time around the ruling party may be punished for factional rifts and the municipalities’ inability to deliver basic services. In Renosterberg, the ANC has on its side the fact that this is the home turf of popular Northern Cape premier Zamani Saul.

In KwaZulu-Natal, the Inkatha Freedom Party (IFP) faces a stressful day of defending marginal seats – with new leader Velenkosini Hlabisa’s electoral appeal put to the test. The IFP has only one safe seat, in rural Ward 15 just outside the town of Nqutu. The party’s ambitions are modest; national campaigns committee spokesperson Narend Singh told DM168: “We aim to retain the four wards we are contesting.”

All the parties have faced the problem of being able to do limited campaigning due to Covid-19 in the run-up to Super Wednesday. As the day has drawn closer, door-to-door canvassing has hurriedly recommenced.

For its part, the IEC says that the by-elections will be held “under strict new Covid-19 protocols”. These include ensuring voters are kept at safe distances from each other, supplying hand sanitiser upon entry and exit of polling stations and the mandatory wearing of masks.

Voters are even encouraged to bring their own pens – though for those who forget, pens will be available, and sanitised after each use. DM168