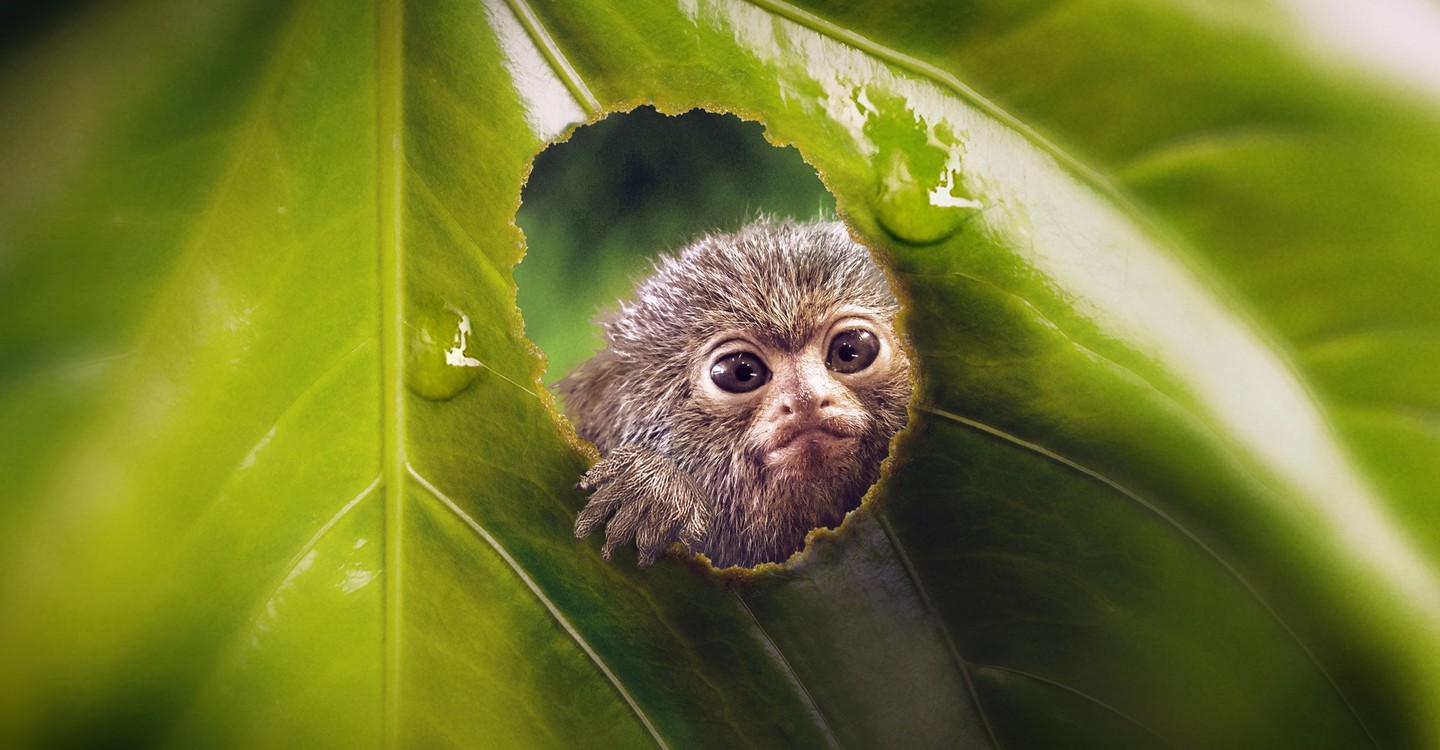 An elephant shrew runs three times as fast as a cheetah by its scale, but how often have you ever heard the phrase ‘fast as a shrew’? A family-friendly nature docu-series on Apple TV Plus pays homage to the marvellous little creatures we so often overlook.

Tiny World is a new nature docu-series that gives credit where credit’s due to the members of the animal kingdom who are so easy to overlook – the tiny ones.

This time around, the star isn’t the giraffe but the bird cleaning its horns and the acacia ant clinging resolutely to its tongue.

By zooming in and viewing the world from the perspective of the smaller critters, and at their scale, we gain an appreciation for just what impressive feats of nature they accomplish every day in order to survive.

Strawberry dart frogs nurse their tadpoles in water-filled leaves at the top of giant trees in the amazon canopy. A goby, a Caribbean fish smaller than a teaspoon, will scale a 350m waterfall using its mouth in order to get to the best breeding spot.

The world is filled with tiny super-powered animals we scarcely notice. Superpowers are mentioned constantly in the series – the narrator can’t seem to help himself. Tiny World is narrated by American actor Paul Rudd, famous for his role as the protagonist in Ant-Man.

Ant-Man is a Marvel superhero whose superpower is the ability to shrink down to the size of an ant. Watching Tiny World gives you a taste of what that might be like. Rudd’s voice is rather chic, so he does sometimes sound like he’s narrating an advert for a blockbuster or a kid’s show (indeed the first scene feels highly referential towards the Lion King).

It is very much a family-friendly show, but what makes it good family viewing is that no matter your age, you can’t help but feel a childlike awe at the majestic and exotic diminutive creatures, not to mention footage so crisp and intimate that it utterly defies explanation by anyone outside of top-of-the-line wildlife photography.

It’s worth leaning into Rudd’s Disney-style narration and letting yourself be blown away by the fantastical beauty of the animal kingdom. If you’re having trouble taking him seriously, you can turn it into a drinking game where everybody drinks each time someone says something along the lines of “how on Earth did they get that shot?”.

Unfortunately, in order to make certain that the show remained engaging for younger audiences, there is no behind-the-scenes footage featured in the series of the fascinating techniques used to film these creatures up close in a non-invasive way. But at least Tiny World knew when to stop pandering to children, unlike its rival.

Tiny World premiered on Apple TV Plus just two months after Netflix released Tiny Creatures. The two shows might appear practically identical at a glance, but they’re not even the same genre. Netflix’s Tiny Creatures isn’t strictly a documentary – it was filmed in a controlled environment in order to script a narrative. The footage is fun, but stitching it together to fabricate anthropomorphic stories pushed family viewing to the point where it all felt a little silly and overproduced.

Tiny World gets the balance right – kids will go gaga for the adorable little beasts and so will you.

Each episode explores the smallest macroscopic animals in a different biome, including Africa’s smallest predator; the world’s smallest monkey in the Amazon; and the world’s smallest bird in the Caribbean. There are some great facts about the interconnectedness of ecosystems and the oft-times symbiotic relationships between small creatures and megafauna. An elephant’s footprint after heavy rain sometimes becomes an entire microcosm, inhabited by creatures such as the ancient tadpole shrimp.

It should be clarified that the tiny world dealt with in the series is not as tiny as the microscopic world invisible to the human eye. It deals mostly with creatures we could clearly see but would scarcely notice, rather than the huge number of micro-organisms whose very existence we are often oblivious too. For an even closer look at the tiny world living inside you, check out Life On Us: A Microscopic Safari on Amazon Prime.

It’s easy to remain preoccupied with life on the scale at which we typically interact with it. Observing the very small is as humbling in its own way as studying the cosmos.

The gift of Tiny World is the insight of the bird-watchers and the household entomologists – the ability to attentively admire beauty regardless of context or preconceived social norms. When you magnify your focus, there is suddenly so much more to marvel at. DM/ ML

Tiny World is available on Apple TV Plus.
You can contact This Weekend We’re Watching via [email protected]