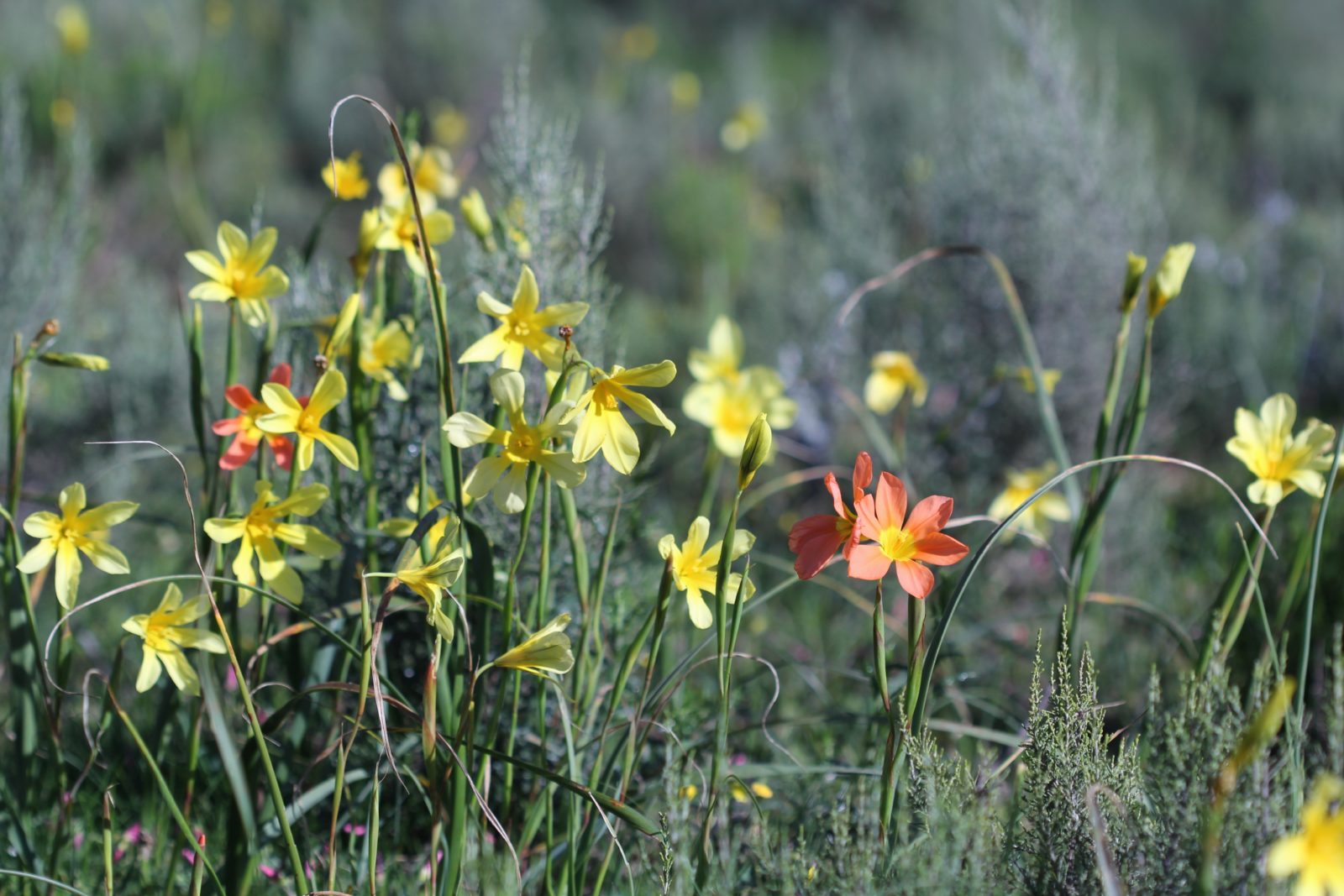 Farmers in the Overberg Wheatbelt who previously viewed renosterveld as wasteland are now conserving it for future generations.

According to Dr Odette Curtis-Scott, it is estimated that “less than 5% of renosterveld vegetation remains”. This vegetation type, which is part of the highly diverse Cape Floristic Region “has borne the brunt of the plough on an extreme scale”, says Curtis-Scott.

Many people may not know renosterveld is considered to be “the richest bulb habitat on earth”, she explains. In addition to the habitat being destroyed for the planting of crops, it is also threatened by being fragmented into small areas surrounded by monoculture and affected by pesticides and other chemicals, unnatural fire regimes, alien vegetation, illegal ploughing, overgrazing and the destruction of watercourses.

Due to the sad state of affairs, active management is necessary to save what remains of this special habitat. However, getting people to care about renosterveld is difficult.

“It looks like an homogenous, grey, drab shrubland and is considered the ugly sister of fynbos, and it has been overlooked, understudied and under-conserved forever,” Curtis-Scott explains. Farmers often refer to it merely as uitvalgrond (surplus ground) or bossieveld (shrub veld) and perceive it as worthless.

Curtis-Scott laments that the renosterveld ecosystem in the Overberg is so degraded that it does not provide any ecosystem services that can be assigned a monetary value, so this cannot be used as an argument for its conservation.

“Most of the water that goes through the system is brackish, which can’t be used for farming, and we are bringing in bees in hives to pollinate canola. We are not using natural pollinators. There aren’t enough of them left in the landscape.”

So, how has the Overberg Renosterveld Conservation Trust (ORCT) changed the perception of farmers towards renosterveld?

Curtis-Scott explains that the way to get farmers to care about nature is by “making them feel something in their hearts”, adding, “The way we have won over all these landowners we are working with today is through showing them what they have and getting them to fall in love with it.

“The incredible diversity of gems is mostly only apparent at burnt sites the first or second spring after fires, when renosterveld is in its full glory, and this doesn’t happen very often. And if you don’t get down on your hands and knees and see what’s going on in a system you may miss out on a lot of information and the gems that you would otherwise be able to enjoy there.”

Curtis-Scott continues: “Despite the horrendous fragmented state, renosterveld has an incredible diversity of plants, insects, birds, mammals and reptiles still hanging in there.”

With the agreement of farmers, the ORCT starts by undertaking field surveys, recording all the plants and animals found. Then, farmers are given a report with colourful photographs showing the rare and special species detected.

“This is the first step in opening their eyes to what is actually in their veld and shows that it is not just a grey, drab shrubland, but there is actually more to it and an incredible amount of diversity,” says Curtis-Scott.

Over time, the ORCT further builds relationships with farmers and, when the farmers seem open to it, they discuss the possibility of committing to a “voluntary conservation servitude with title-deed restrictions in perpetuity, which makes sure that the veld is safe for future generations”.

So far, nearly 3,000ha have been signed up — all on account of getting farmers to care about unique and special stretches of land.

Curtis-Scott and five co-authors have recently published Field Guide to the Renosterveld of the Overberg, which she says “is a wonderful tool to show that it is not just bossieveld, uitvalgrond or renosterbos veld, but there is actually a whole lot more to it”. The book details more than 980 plant species, 140 creatures — from invertebrates to mammals, management guidelines, ecological information, conservation issues, red listing and the names of some of the farming champions.

Curtis-Scott quotes John Sawhill saying, “A society is not only defined by what it creates but what it refuses to destroy.” DM

Dr Dian Spear is a freelance science editor and writer focusing on wild nature and sustainability. She has a PhD in zoology from Stellenbosch University and has published scientific papers in the fields of biodiversity conservation and adaptation to climate change.