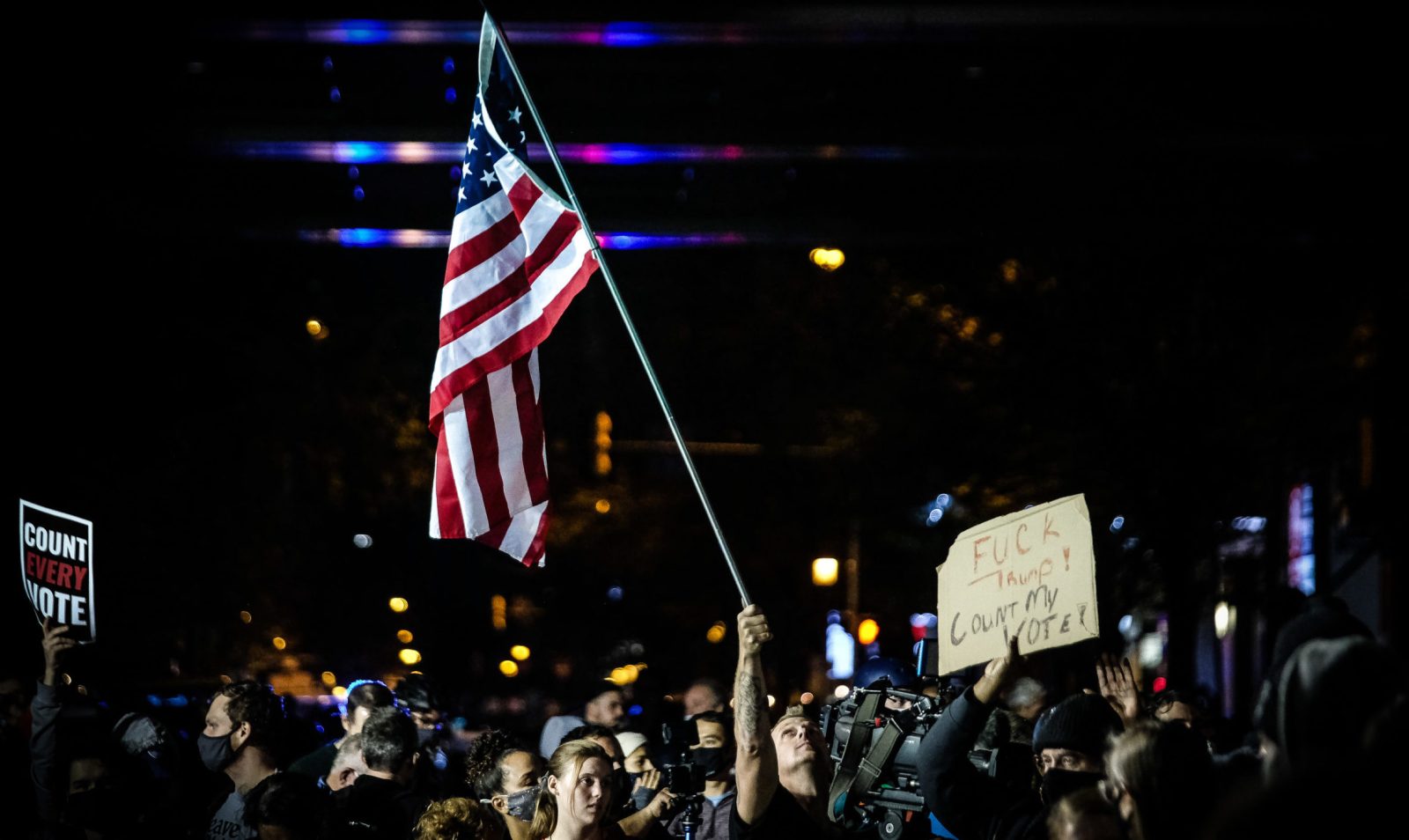 Former US vice president Joe Biden is inching closer to becoming the 46th president of America, while President Donald Trump insists he is winning, ‘despite historic election interference from big media, big money and big tech’.

Donald Trump was addressing the media from the White House briefing room when he made the comments on Thursday. Looking slightly paler or less “tanned” than usual, he said that:

“Democrats are the party of the big donors, the big media, the big tech, it seems and Republicans have become the party of the American worker… Media polling was election interference in the truest sense of that word, by powerful special interests … designed to keep our voters at home … they were, what you call suppression polls.”

The three biggest television news networks in the country – CBS, NBC and ABC – cut away from the president and went back to their newsrooms.

Trump’s comments were made as Joe Biden looks all the more likely to win, with numbers in the states of Georgia and Pennsylvania moving – at what seems like an excruciatingly slow pace – in the Democrat’s direction.

In marked contrast, a calm and measured Biden took a moment to reach out to people who had Covid-19 or had lost a loved one to the disease which has claimed almost 240,000 Americans. He said that he was confident of winning but “each ballot must be counted…  I  ask everyone to stay calm… the process is working.”

Vote counting in Philadelphia was stopped briefly early on Thursday, when the Trump campaign managed on an appeal to get a judge to overturn an earlier ruling from a lower court judge. The Trump campaign had on Wednesday accused election officials of hiding ballot counting and related processes from Republican poll observers, saying observers were too far to clearly see what was happening.

The new ruling called for Republican election observers to be allowed to stand “within six feet” (about 1.8m) of vote counting processes. This caused a temporary cessation of counting in order to rearrange the venue to make room for the closer proximity of the observers. The new ruling stated that observers should be able “to observe all aspects of the canvassing processes within six feet, while adhering to all Covid-19 protocols, including wearing masks and maintaining physical distancing”.

The Trump campaign was back in the Philadelphia court again after 6pm, claiming that their observers – while being given the six-feet proximity to the counting process, were not being allowed “equal access”. The Philadelphia Inquirer reports that US District Judge Paul Diamond was, at times, “exasperated” and said to both sides: “Can we be responsible adults here…”

Outside the Philadelphia Convention Centre in the early afternoon, Count Every Vote protestors and Trump supporters were largely peaceful. Miles Bryan of public radio station WHYYNews tweeted that being among the demonstrators felt less like a protest and more “like a festival”.

I’m at Philly’s convention center for @WHYYNews, where dozens of Trump supporters are protesting(?) the ballot counting inside, while dozens of anti Trump people chant “count every vote”—all while dozens of reporters jostle for interviews.

All eyes were on Georgia late Thursday night as the last votes were slowly being finalised, but even as the number of ballots still needing to be counted got smaller and smaller, it was still too close to call at the time of writing this article – an estimated 99% of the votes had been counted. Trump supporters gathered at a counting centre in Atlanta, Georgia, to demand that vote counting be stopped. Biden is also slowly chipping into Trump’s lead in Pennsylvania, with an estimated 95% of the votes counted at the time of writing and Trump leading by a mere 0.3%.

Protests took place around the country again on Thursday, into the evening and not all of them were peaceful. Count Every Vote supporters held a moment of silence to remember those who had died of Covid-19 and those who died at the hands of police. In New York City, several protestors were arrested for a second consecutive night as police blocked marchers and started making arrests when Biden supporters reportedly clashed with Trump supporters. A policeman was also injured on the scene. DM