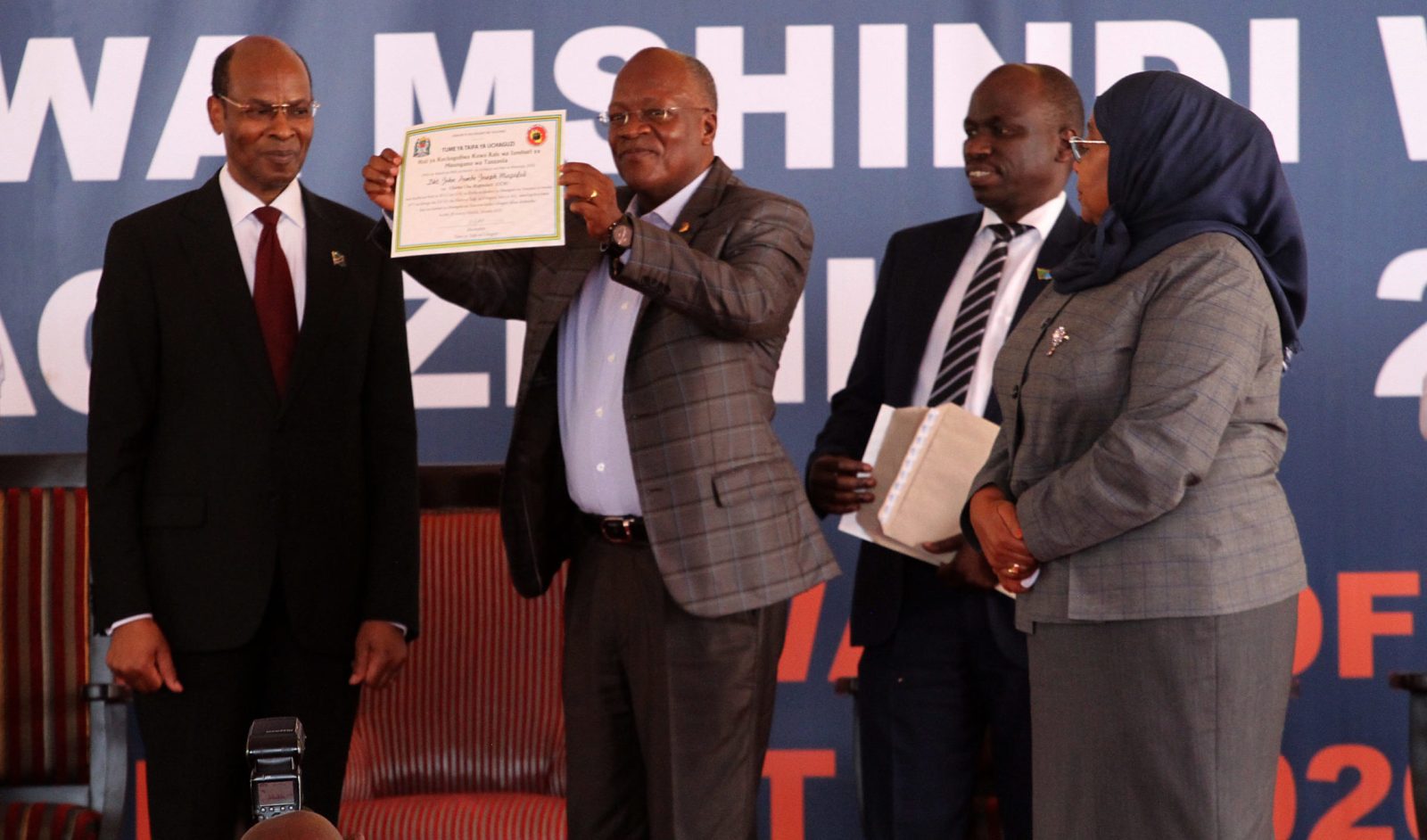 President Cyril Ramaphosa on Tuesday congratulated the Tanzanian ruling party, the CCM, and its leader John Magufuli for his declared election victory, commending ‘the people of Tanzania for upholding democratic principles and holding peaceful elections’.

Ramaphosa said he ‘looks forward to working with Dr Magufuli to strengthen the strong and cordial bilateral relations that exist between South Africa and Tanzania, as well as in matters of mutual interest in the Southern African Development Community region, the African continent and the world’. The Tanzanian opposition experience would suggest that this is a very limited view of democracy.

There is no other accurate way to describe an event which lacked transparency, respect for human rights, sound procedures, integrity and honesty.

From gerrymandering and a flawed voter registration process to the campaigning phase to the announcement of results and subsequent crackdown, the elections have confirmed our very worst suspicions regarding the regime of President John Pombe Magufuli. It has no regard for the wellbeing of citizens of Tanzania and Zanzibar, and zero respect for democratic values and human rights. It’s patently not interested in power for the sake of Tanzania and Zanzibar, but for power’s sake alone.

Following the polls, democracy can no longer be considered an appropriate label for the United Republic of Tanzania. We have returned to a one-party state in all but name, and one that is defined today by brutality not the common search for unity and humanity as during President Julius Nyerere’s era.

Tanzania’s reputation as a beacon of peace and stability in the region, which has been steadily eroded during President Magufuli’s first term, now lies in tatters.

The polls held on 28 October 2020 cannot be described as free, fair or credible. The campaign period was marred by disruption, sabotage and physical intimidation with the National Electoral Commission (NEC), the Zanzibar Electoral Commission (ZEC) and the police all complicit in preventing opposition parties from participating effectively.

Magufuli seems to have taken to heart the saying attributed to Stalin that ‘It’s not the people who vote that count, it’s the people who count the votes’.

On polling day ballot boxes were tampered with and opposition agents prevented from entering polling stations. Meanwhile, ACT Wazalendo party workers uncovered stacks of ballot papers and numerous returning officers’ statements of results that appear to have been completed before the polls. Video and photographic evidence abounds of premarked ballots on both the mainland and Zanzibar.

Of course, elections are not just rigged on the day. A substantial amount of the rigging groundwork took place before election day. Opposition members and leaders have faced arrest, interrogation and arbitrary detention by police. We have been subject to routine intimidation and harassment as we attempted to exercise our democratic right to campaign. In Zanzibar, police shootings reported on the eve of elections resulted in several fatalities and scores injured.

The captured NEC and ZEC have been instrumental in the manipulation of the election, which is why we have little faith in their ability to address our concerns. As in last year’s Civic Elections, the disqualification of opposition candidates was again deployed as a key tool by the authorities to limit participation and frustrate the democratic will of the electorate.

Still, we participated. On election day we went to the polls because we believe in the democratic process and the importance of delivering change through the ballot box. The result, unsurprisingly, was a fraudulent election that failed to stand up to democratic standards and cannot be said to confer any real legitimacy on the incumbent regime.

In our response, we are using all legitimate means at our disposal, including public mass action. We are also working closely with other opposition parties and the civil society that remains active to coordinate our plans in the struggle to bring democracy back to our country.

Along with Chadema, ACT Wazalendo has called for supporters to come out in large numbers to peacefully protest the fraudulent nature of the elections. We have demanded fresh polls. The response of the authorities says it all. Arrests left, right and centre, with the police threatening the use of force to detain those who protest and security forces deployed to block our path. In Zanzibar, ACT Wazalendo party leaders arrested on Thursday for “unlawful assembly” were brutally beaten in police custody. Our party Deputy Secretary-General for Zanzibar was forcibly abducted last Wednesday night and has still not been charged or allowed to speak to a lawyer.

While there are limits to what the international community can do in such instances, at a minimum it can stop funding and recognising this abusive regime. After last week’s elections there are no excuses to hide behind. Continued support simply enables the authorities to maintain their abuse of power.

We will continue to protest the election and voice our calls for a return to democracy. There is no other option. However, our voices are being stifled. The growing restrictions to freedom of speech and the reduction of space for free media in Tanzania has been recognised internationally in recent times. On Election Day sites such as WhatsApp, Twitter, Instagram and Google were subject to blockages and throttling. As we face arrest and continued harassment we require outside assistance; help from those that understand the importance of democracy for development, the upliftment of people and the long-term prospects for peace and stability in Tanzania, the region and beyond.

Tanzania’s election offered a dark day for democrats but a playbook for autocrats.

In October 2020 the international community may be forgiven for having its attention elsewhere, preoccupied with the Covid-19 pandemic that continues to rage. It may have been prevented from deploying observers to the ground in the usual manner to witness the election first-hand. However, the international community knows enough of the build-up to elections and the tendencies of the Magufuli government to assess our concerns as credible and legitimate.

The elections have not passed without comment. Some have raised their reservations through carefully worded statements, with the US noting its concern regarding “reports of systematic interference in the democratic process” and allegations of irregularities that included the use of force against unarmed citizens. However, words will not suffice on this occasion. After last week’s polls we are beyond that point.

We are past the fork in the road.

As a first step, international governments must not recognise the illegitimate governments of Tanzania and Zanzibar. Secondly, if donors care for the people of the United Republic of Tanzania and the country’s long-term prospects for democratic renewal and stability, now is the time to say “enough is enough” and withdraw support from a regime that has no interest in the will of its people.

While there are limits to what the international community can do in such instances, at a minimum it can stop funding and recognising this abusive regime. After last week’s elections there are no excuses to hide behind. Continued support simply enables the authorities to maintain their abuse of power.

Instead, funds should be targeted to countries and governments that are pursuing inclusive development and progress for their citizenry; for those who are furthering democratic standards and values to ensure that it is the people who have the ultimate say. It saddens me to say that Tanzania no longer meets such criteria.

Tanzania’s 2020 election was a sham. It was undemocratic by any meaningful standard and the government of President John Magufuli lacks legitimacy as a result. The ruling Chama cha Mapinduzi party (CCM) seized almost every key opposition stronghold, including those which have consistently held an opposition majority since 1995, Magufuli’s rival, opposition leader Tundu Lissu, was said to have won only 13% of the vote by the electoral commission, and was then promptly arrested by the state. Yesterday, I was arrested after seeking to visit Chadema colleagues currently in custody for “terrorism”.

As the opposition we will not relent in our mission to restore democracy and freedom in the United Republic. We will continue to speak the truth whenever we are free to do so.

We call on donors to listen to our concerns and withdraw all support from the regime of President Magufuli until new elections under international supervision are run. DM

Zitto Kabwe is the leader of ACT Wazalendo.