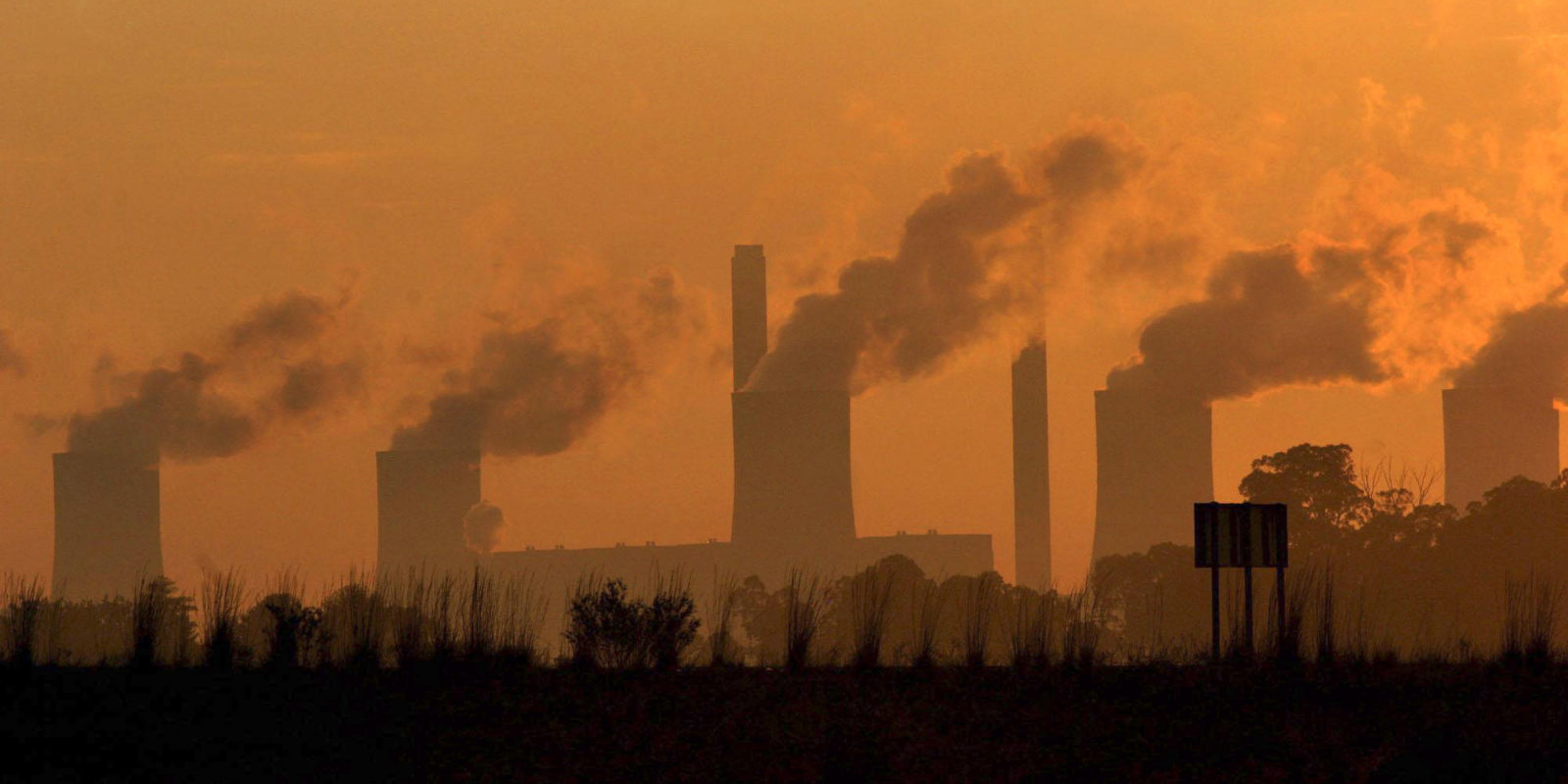 Experts have linked around 15% of Covid-19 deaths worldwide directly to comorbidities caused by exposure to high levels of air pollution. This figure is higher, at 18%, in South Africa.

Heart and air chemistry experts in Germany say the Covid-19 death toll in South Africa and other parts of the world has been significantly exacerbated by high levels of toxic air pollution in several big cities and industrialised nations.

In a study published on 27 October in the international journal Cardiovascular Research, a team of researchers from the Max Planck Institute for Chemistry and the Johannes Gutenberg University of Mainz medical centre found that 15% of Covid-19 deaths globally are attributable to underlying diseases caused by tiny particles of industrial dust pollution. These include diseases of the heart, blood vessels and lungs.

They note that long-term exposure to poisons in the air around us increases the risk of comorbidities such as cardiovascular and pulmonary disease, thereby increasing the risk of death among Covid-19 patients.

For the first time, their study has estimated the proportion of coronavirus deaths that could be attributable to air pollution, in almost every country in the world. This includes an 18% increase in South Africa’s Covid-19-related deaths.

However, because air pollution levels vary from country to country – and within countries – the scientists say that the number of additional deaths could be as high as 25% to 30% in some of the heavily polluted areas of South Africa such as Gauteng, the northern Free State and the southwestern parts of Mpumalanga.

At a global level, the five countries with the highest additional death rates owing to air pollution were said to be the Czech Republic (29% of national Covid-19 deaths), Poland (28%) and China, North Korea and Slovakia (all 27%).

Jos Lelieveld, the director of the atmospheric chemistry department at the Max Planck Institute for Chemistry in Mainz, said the Chinese statistics were only reflected as an average figure. The actual fraction of Covid-19 deaths owing to air pollution could exceed 35% in the most heavily polluted regions of China.

South Africa among most affected

At a continental level, South Africa and neighbouring Lesotho and eSwatini top the list of African nations with the highest percentage of coronavirus deaths that could be attributed to human-related air pollution sources.

Lelieveld said that the 18% of Covid-19 deaths in South Africa owing to air pollution was an average national calculation. This percentage could be as high as 25% to 30% in certain pollution hotspots in parts of Gauteng, the Free State and Mpumalanga.

In the more remote and less polluted parts of the Western Cape and Northern Cape, for example, the number of additional deaths related to cardiovascular and pulmonary comorbidities from air pollution were calculated to be between 0% and 10%.

Elsewhere in the world, the increased risk of Covid-19 patients dying owing to air pollution-induced ill health was about 27% in East Asia, 19% in Europe, 17% in North America and about 7% in Africa.

On the other side of the chart, the study found that particulate pollution contributed to 6% of Covid-19 deaths in Israel, 3% in Australia and just 1% in New Zealand.

The research team, which included Thomas Münzel, the head of cardiology at the Johannes Gutenberg University, and Andrea Pozzer from the Max Planck Institute for Chemistry, wrote that the percentages published in the study are an estimate of “the fraction of Covid-19 deaths that could be avoided if the population were exposed to lower counterfactual air pollution levels without fossil fuel-related and other anthropogenic [caused by humans] emissions.”

They add that this “attributable fraction does not imply a direct cause-effect relationship between air pollution and Covid-19 mortality (although it is possible). Instead it refers to relationships between two, direct and indirect, i.e. by aggravating comorbidities that could lead to fatal health outcomes of the virus infection”.

In more simple terms, Münzel spoke about a “double hit”. That is a scenario in which air pollution damages the lungs, leading to enhanced uptake of the virus by the lungs and probably by the blood vessels and the heart.

“When people inhale polluted air, the very small polluting particles migrate from the lungs to the blood and blood vessels, causing inflammation and severe oxidative stress, which is an imbalance between free radicals and oxidants in the body that normally repair damage to cells.

“This causes damage to the inner lining of arteries, the endothelium, and leads to the narrowing and stiffening of the arteries. The Covid-19 virus also enters the body via the lungs, causing similar damage to blood vessels, and it is now considered to be an endothelial disease,” said Münzel.

Endothelial dysfunction is a type of non-obstructive coronary artery disease in which there are no heart artery blockages, but the large blood vessels on the heart’s surface constrict (become narrow) instead of dilating (opening).

“If both long-term exposure to air pollution and infection with the Covid-19 virus come together then we have an additive adverse effect on health, particularly with respect to the heart and blood vessels, which leads to greater vulnerability and less resilience to Covid-19. If you already have heart disease, then air pollution and coronavirus infection will cause trouble that can lead to heart attacks, heart failure and stroke,” said Münzel.

Referring to previous research that suggests the fine particulates in air pollution may prolong the atmospheric lifetime of infectious viruses and help them infect more people, Lelieveld said: “It’s likely that particulate matter plays a role in ‘superspreading events’ by favouring transmission.”

To create a model to calculate the fraction of coronavirus deaths that could be attributed to long-term exposure to fine particle pollution – particulate matter that is less than or equal to 2.5 microns in diameter, known as PM2.5 – the researchers combined epidemiological and satellite data. The epidemiological data came from previous US and Chinese studies of air pollution and Covid-19 and the SARS outbreak of 2003, supported by additional data from Italy. The satellite data showed global exposure to PM2.5. In the equation is also information on atmospheric conditions and ground-based pollution monitoring networks.

The results are based on epidemiological data collected up to the third week of June 2020. The researchers say a comprehensive evaluation will need to follow after the pandemic has subsided.

So far, South Africa has reported more than 730 000 coronavirus infections and about 19 500 deaths.

Lelieveld said: “Since the numbers of deaths from Covid-19 are increasing all the time, it’s not possible to give exact or final numbers of Covid-19 deaths per country that can be attributed to air pollution.

Commenting on the study, South African epidemiologist Rico Euripidou said activists have reached a critical juncture in the battle to compel Eskom to comply with the minimum pollution emission standards.

Eskom has submitted yet another round of applications to either further delay compliance with the minimum emissions standards, and in some cases avoid compliance altogether, for 14 of its 15 coal-fired power stations.

Euripidou, who is the environmental health campaign manager for the Pietermaritzburg-based groundWork environmental justice group, said Eskom has made it very clear that it cannot comply with the new South African emissions limits.

“In fact, Eskom has recently confirmed that it is in the process of submitting exemption applications for its fleet of coal-fired power stations and it no longer intends to retrofit flue gas desulphurisation technology at Medupi power station, as required by the World Bank loan.

“The bottom line is that Southern Africa’s biggest atmospheric polluter wants to be formally excused from compliance with our health-based air pollution laws and it has suspended retrofitting its stations with pollution control technology,” said Euripidou.

A message to governments

The authors of the recent Covid-19 and air pollution study have a take-home message for governments around the world, saying:

“Our results suggest that air pollution is an important cofactor increasing the risk of mortality from Covid-19. This provides extra motivation for combining ambitious policies to reduce air pollution with measures to control the transmission of Covid-19.

“A lesson from our environmental perspective of the Covid-19 pandemic is that the quest for effective policies to reduce anthropogenic emissions, which cause both air pollution and climate change, needs to be accelerated.

“The pandemic ends with the vaccination of the population or with herd immunity through extensive infection of the population. However, there are no vaccines against poor air quality and climate change. The remedy is to mitigate emissions. The transition to a green economy with clean, renewable energy sources will further both environmental and public health locally through improved air quality and globally by limiting climate change.” DM

Every breath we take: Counting the cost of noxious air pollution in the Vaal Triangle