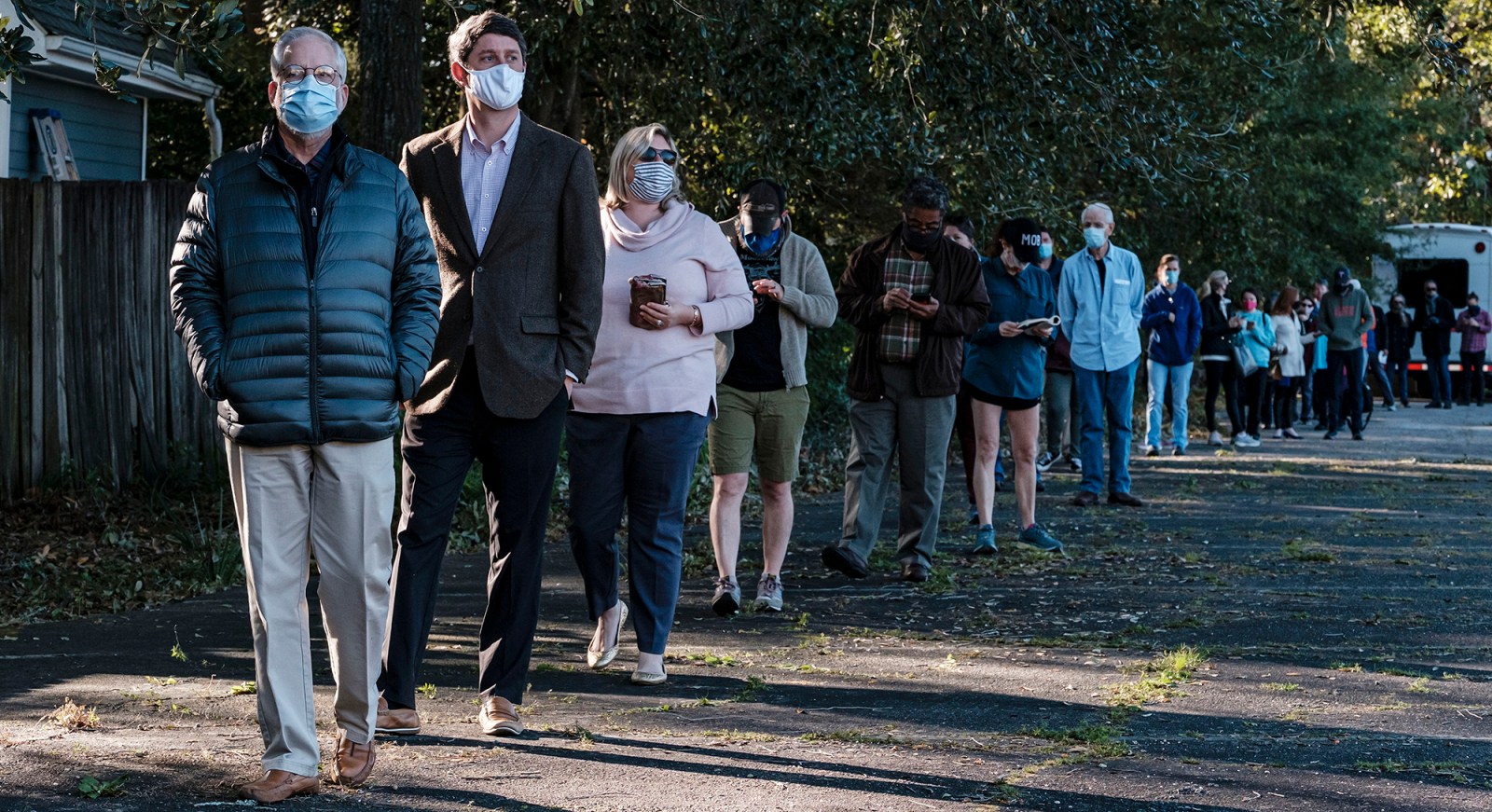 Voters wait in line at a polling location at a community centre in Mobile, Alabama, USA, on 03 November 2020. EPA-EFE/DAN ANDERSON

Voting started quietly in the US, but there is concern about possible ‘fireworks’ later. Polls opened at 6am and 7am, Eastern Standard Time, on Tuesday November 3. With about 100 million votes already cast, another 50 million Americans are expected to vote before the last polls, in Alaska and Hawaii, shut down at 8am on Wednesday, South African time.

The US does not have a cut-off date for campaigning, or political advertising for that matter, and both Joe Biden and Donald Trump were still travelling around the country addressing voters on election day.

Democratic candidate Joe Biden started his day on a solemn note, going to church in Wilmington, Delaware, before stopping at the cemetery where his son, daughter and first wife are buried. He then went to Scranton, Pennsylvania, where he was born, to speak to supporters there before heading for Philadelphia.

Today, vote for a new day in America. pic.twitter.com/WzarlQ8JDI

Donald Trump started his day with an interview with Fox TV where he went from confident: “I think we will have victory”, to criticising the channel for – according to him – giving more airtime and interviews to Democrats than Republicans.

Later, while visiting a gathering of Republican campaign workers in Arlington, Virginia, Trump was asked if he had prepared a concession speech.

“No, I’m not thinking of a concession speech or acceptance speech yet,” Trump said. “Winning is easy, losing is never easy, not for me it isn’t.”

Going into voting day, polls still had Biden ahead of Trump, but some experts say polls often do not contain enough checks and balances to account for the human condition and should therefore be handled with care. One of these experts is Rusty Brooks, director of the International Centre at the Carl Vinson Institute of Government at the University of Georgia.

Brooks says, “I never underestimate Donald Trump or his supporters. Just look at the lessons of Al Gore and Hillary Clinton when it comes to people who should have won but didn’t. If Biden is leading, I attribute it to early voting and the likelihood that polls overrepresent people likely to tell the truth.”

He adds that possibly the best example of why polls should be taken with a pinch of salt is that:

“2016 demonstrated that polling companies underrepresented Trump voters primarily because their sampling methods did not accurately count these voters as the true extent of their support. This year polling companies say they have made improvements to their polling methods to better account for Trump support but we won’t know if these changes are better until after we see the results and see if polls did any better in counting Trump votes.”

By and large, voting got off to a peaceful start. However, many Americans had personal safety concerns around in-person voting at the polls and were also worried about possible violent protests following the results. One voter in Washington told The Washington Post that the city was “a political powder keg”.

He may not be wrong, given that the White House on Monday erected a high “unscalable” fence around its perimeter and various civic protests were planned for Tuesday, some of them within a block of the White House.

Brooks, however, said some of the “fears” the Trump administration appears to be experiencing are mostly for show as a way to get more support.

“I think the White House or Trump is creating a false narrative to support his fearmongering to his supporters.  You (Trump) have to create the images that you are selling and convince people that lawlessness is the result of a Biden win.

“My greatest fear is not of rioters clambering over the White House walls (unless Trump refuses to leave) but of his more ardent supporters causing trouble if Trump loses because the election is close and Trump can convince them it was rigged. But I also believe there is potential for violence from people on the other side if they see any Trump win as a stolen election.”

A retired CNN journalist told Daily Maverick, “In the old days, party officials would walk their neighbourhoods, looking for people who hadn’t voted and would say, ‘Come with me to the polling place and I’ll give you five dollars’ – these guys were precinct [area] captains and were given money by the campaign, called ‘walking around cash’ for the express purpose of ‘encouraging’ people to vote.”

This translates into the now illegal practice of “vote buying”, and appears to have been replaced with what Brooks refers to as creating a false narrative to “buy” support.

Vote tallies are expected to start coming in between 10pm and midnight on Tuesday, Eastern Standard Time (5-7am on Wednesday, SA time). Counting will go on through the night and mail-in or absentee ballots will still be counted for possibly another three or four days. Ballots that arrive by mail must be postmarked before 3 November, but do not need to arrive by or on the day. DM

An Wentzel is Night Editor, specialist reporter for Daily Maverick. She went to the USA to visit family as the pandemic struck and is currently marooned in the land of the ‘free’.