It’s all talk and no action: Time for South Africa’s plastics industry to put its money where its mouth is 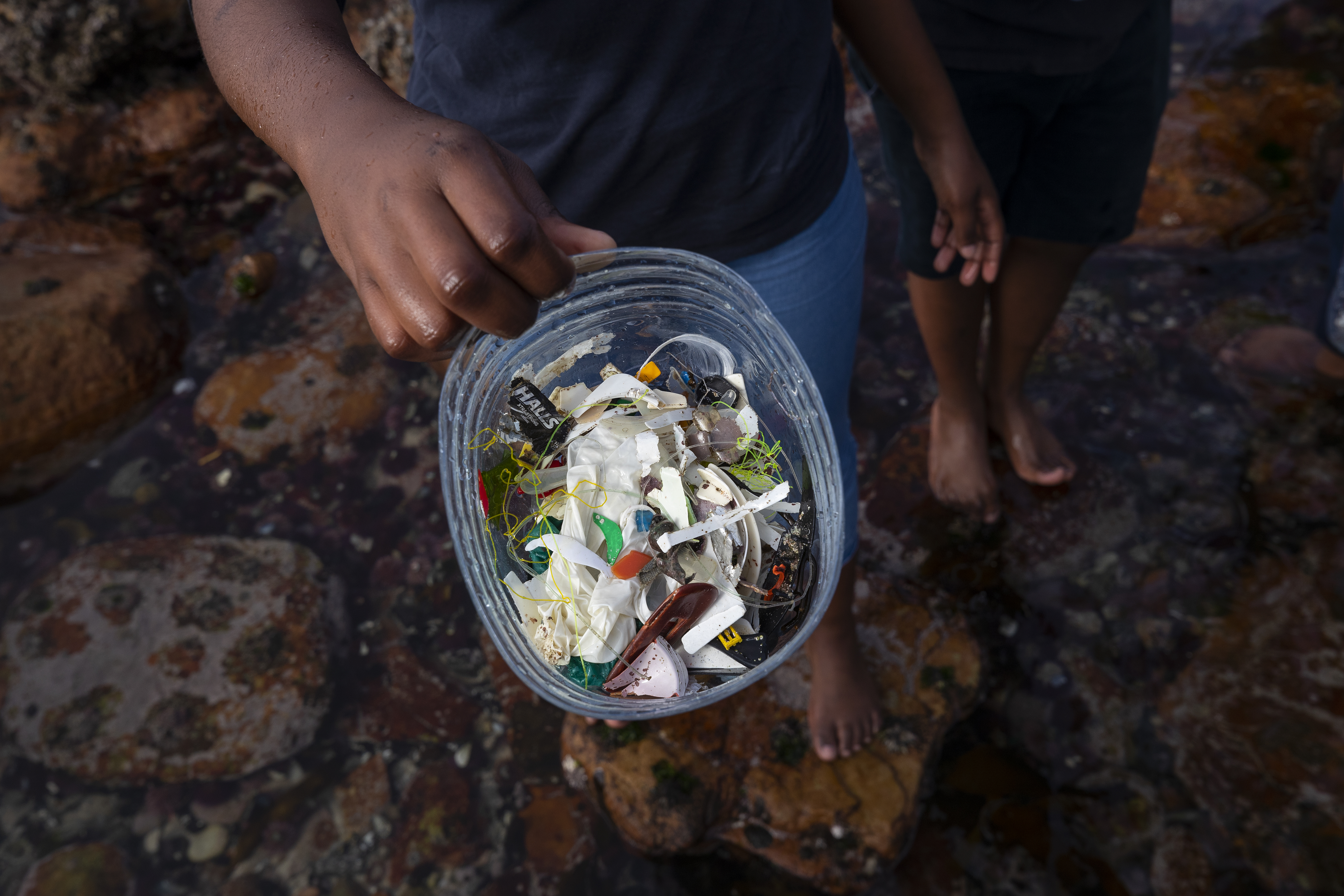 A South African student holds a container of small plastic items picked out of Decorator Sea Urchins during a beach clean up of the inter-tidal zone of Dalebrook tidal pool in Kalk Bay, Cape Town, South Africa, 04 May 2019. The cleanup was organized by Oceano Reddentes, a South African Non-Profit Organization teaching ocean users to collect plastic to make Ecobricks which are then used to build homes for the homeless. Plastic pollution has reached an epidemic proportion. According to an Ellen MacArthur Foundation report, there will be more plastic in the ocean than fish by 2050. Africa is one of the most affected continents due to its extensive coastline and underdeveloped waste systems allowing plastic waste to easily enter the ocean. The rapid growth of plastic production in the three biggest areas the European Union, China and the US particularly in single-use plastics is recognized as one of the greatest risks facing the environment and mankind. Efforts at recycling and plastic waste education are on the rise on the African continent with many programs being initiated by youth groups who view the problem as the biggest environmental challenge facing the new generation. EPA-EFE/NIC BOTHMA

If the hundreds of billions of dollars oil and petrochemical companies spend on expanding virgin plastic production could be invested into end-of-life activities such as recycling, imagine the opportunities and resulting cleaner environment.

The latest recycling figures for 2019 from the Plastics SA recycling survey have been published, with virtually no change from 2018. At first, I thought this was due to the Covid-19 pandemic, considering the focus there has been on sustainability. However, to my surprise, the period audited was from January to December 2019, before the pandemic struck.

At current rates, it will take more than 20 years just to double the current percentage of plastic being recycled – with more than 750,000 tons of plastics currently going to landfill or leaking into the environment.

Plastics SA’s target of “zero waste to landfill by 2030” is unrealistic, given the current trends.

Plastics SA cites economic challenges faced by the industry in 2019 to explain dropping recycling rates for some polymers. In previous years, and even now, plastic industry bodies and producer responsibility organisations have talked about the need for separation at source and more infrastructure (such as material recovery facilities and recycling facilities).

The focus is and has been on the supply side (informal and formal waste collectors, some collection and recycling infrastructure), but stimulating the demand side and investing in this area of the value chain is completely lacking.

If supply side is the issue, why did the two biggest recyclers close shop last year (MPact PET Recycling and Transpaco Recycling)? Surely, if there is a demand for the product and willingness to buy recyclate, it will lead to more investment in infrastructure and higher collection rates?

Frankly, the plastics industry lobbyists and spokespersons are avoiding the elephant in the room, that plastic recycling is not economically feasible and does not support the business objective of virgin producers to sell more virgin plastic.

Plastics produced at Sasol are a byproduct of the coal-to-liquid production process and the company receives significant fuel subsidies and carbon tax exemptions, boosting its profit by almost $500 billion in 2019. Plastic profits are therefore important to the local chemical industry and the majority shareholder – the government pension fund. Therefore, the plastics industry will never admit the inherent failures of recycling but rather use other messaging to ensure that unsustainable production and consumption of plastics continues unchecked.

Since the 1970s, when plastic litter and debris started coming to the attention of consumers, recycling has been put forward as the silver bullet. Various mechanisms were used to assure the public that ALL plastic can be recycled. This was done by placing resin codes with the recycling symbol and number inside on some plastic products and packaging to entrench the perception that all is recycled. This is very far from true.

Industry lobbyists have used elaborate advertising and narratives, not only to mislead the public but also to place the blame for plastic pollution squarely on the consumer. If you ask any person on the street what they think is the reason for all the plastic packaging polluting the environment, even school-going children (and I can attest to this) will simply say that people must not litter and it is our fault.

For decades, the global plastics industry has entrenched this narrative through marketing, public relations and consumer campaigns, shifting sole accountability to the consumer and, in the case of South Africa, to government.

Most people would simply accept this but experts in life-cycle assessment (LCA), say that the end-of-life impacts of plastics in the environment on biodiversity, the economy and human health have not been taken into account in the LCA and are expected to be higher than other materials.

And then there’s the oil price.

Virgin plastic production is directly linked to the oil price. BP and other oil companies have forecast a long-term decline in oil consumption and say global oil demand will never again regain the levels seen in 2019 due to stronger climate action in countries, declining energy consumption and the pandemic.

Therefore, to ensure the economic viability of the fossil fuel and oil companies, substantial investments of hundreds of billions of dollars into new plastic and chemical facilities and projects are being made — almost leading to the demise of Sasol this year due to its US expansion.

With virgin material getting cheaper and staying cheap, as per the findings of the big oil companies, along with more investment in more plastic production, we should expect that recycling to become even less feasible. Expect to see some shocking recycling rates in South Africa and globally in the future if producers higher up the value chain don’t start investing heavily in this sector.

A source who prefers to remain anonymous and who is involved in public-private partnerships said: “Everyone talks recycling but no one is prepared to pay for it. It takes a lot more effort to produce quality recycled material than to produce it from oil. Therefore, it should come at a premium and not at a discount to virgin material if you require the same quality as virgin.”

So, where do we go from here?

According to recently published research, a combination of interventions at each life-cycle stage of plastic is needed to address the plastic pollution crisis. This includes, most importantly, a reduction in production and consumption, substitution with alternative materials, more investment and support for recycling (mechanical and chemical) and appropriate disposal at end of life.

We have all the know-how and technology. If only the hundreds of billions of US dollars that large oil and petrochemical companies are willing to spend on expanding virgin plastic production could be invested into end-of-life activities such as recycling, imagine the opportunities and resulting cleaner environment.

If the industry says recycling is the solution, why are they not investing in it – stimulating both the supply and demand side to make it more competitive with virgin plastic?

It’s time that all involved in the plastics sector in South Africa (and by that I mean producers, converters, brand owners and retailers) took action – not talk and PR, but real action – to reinvigorate the recycling sector and to find real solutions. DM