Never. Ever. Again: Views from an African-American voter in Africa 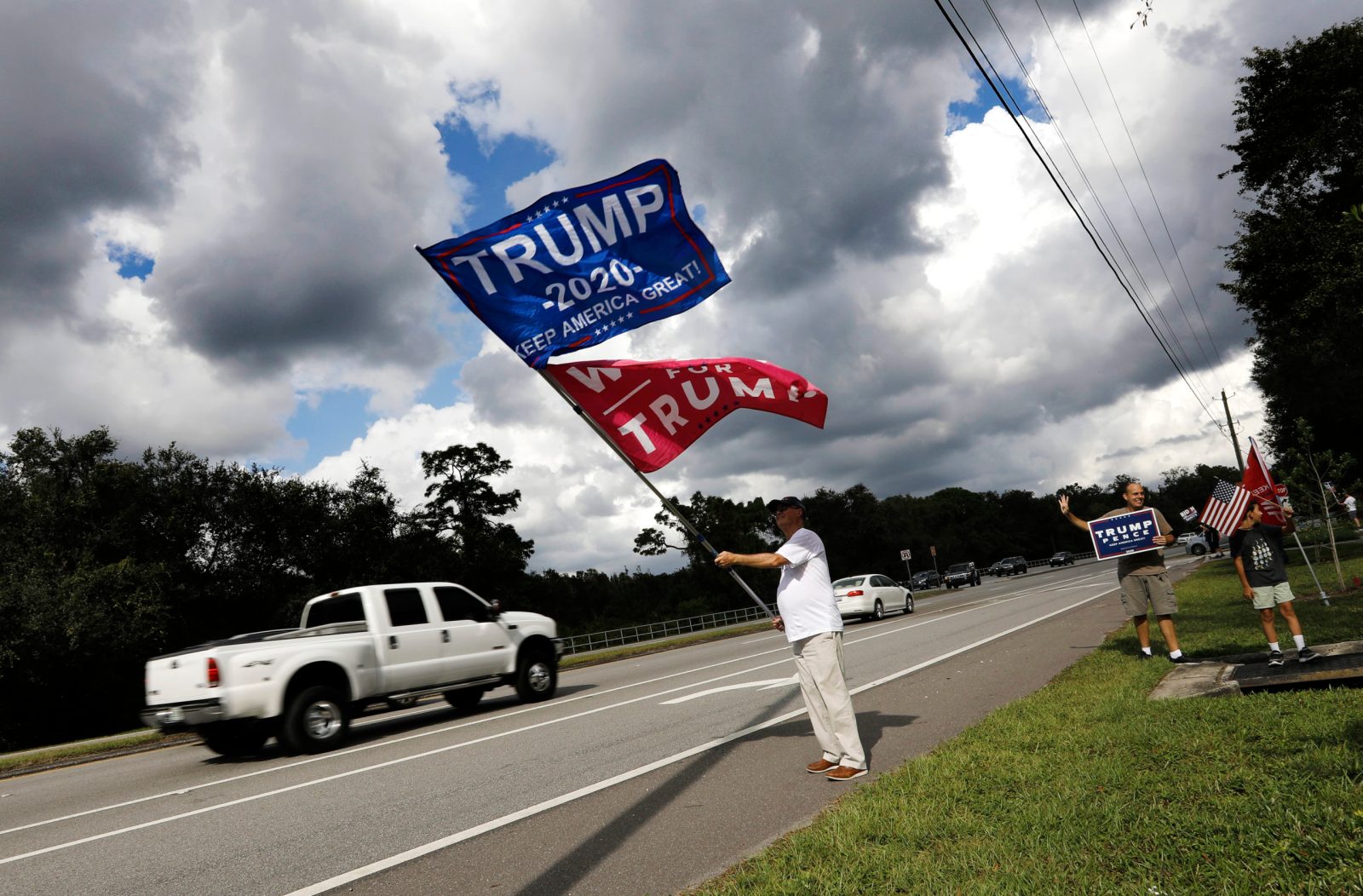 Trump supporters wave banners and hold up signs at the Jimmie B. Keel Regional Library during the 2020 US Presidential Election in Tampa, Florida, USA, 01 November, 2020. EPA-EFE/PETER FOLEY

The unprecedented early-voter turnout for the US presidential election shows that America can do better and truly restore democracy in the broken, nightmarish country.

By US presidential election day on Tuesday, November 3, at least 85 million citizens would have cast their early votes. That already breaks the 1908 eligible voter turnout record.

Well, through the virtues of international courier DHL, my absentee ballot from Mauritius just barely made it to the rightful local voting precinct on Friday for early presidential voting along with unprecedented millions of fellow American voters. I hope every other American in Africa and elsewhere abroad did the same as absentee voters.

It is a proud day to be an American in confirming the extraordinary fight within our American societal soul when our societal back is against some societal threatening wall. We rise hopefully just in time to fight back the political and cultural evil trying to overwhelm us and enslave us in the wicked tyranny of dictatorial governance with its glaring symptoms of an attempted facist state.

No matter the outcome on Tuesday, or however long it takes to tabulate the voting results, let us not sit on our laurels, that is, this incredible electoral feat. There will be great work that needs to be done and accomplished to get our democracy back and to continue on the road of making it more authentically inclusive to match its dramatic  demographic transformation away from its not-too-distant White-Supremacy governance past.

So, let us, shaken from our civil society slumber, regain our pride observed in the though far from perfect but still transformation moment – the Obama-Biden 2008-2016 years – in getting back on the  1950s-1960s bandwagon of being what a democracy is supposed to be: for us, the American people, no matter who or what we are.

And let us rebuild from here, never again allowing anyone in the White House – or any house – attempt to divide us and tear us apart and steal away and destroy our democracy through manipulating our naïve or intentional phobias and bigotries.

In taking this stand, we will take advantage of this unprecedented performance at the polls to ensure that justice for all becomes a real thing and that democracy will be the real thing for once and for all. Let us never allow this to happen to us again. Never. Ever. Again. Don’t do it again. Let us not let such a close call to losing who we are happen to us again. Never. Ever. Again.

And let those who come into power know that their feet shall be held to the fire like never before to remain truly committed to justice for all and not just for the very few. And be accounted for healing the breaches in public confidence in the government and in civil society kick-started with the fall of President Richard Nixon, reinforced in the fall of President Bill Clinton, and now President Donald Trump reminding us of our need to heal and recover after 50 years of moral decay and trauma in elite public governance in America with its grave private sector and civil society rotten and unethical leadership parallels.

Those we elect to presidential and congressional power and next appoint to federal benches must restore and expand the use of instruments of diplomacy rather than war. We Americans must become, and remain, a respectful and inclusive empowering global partner, shedding, for good, our imperialistic Cold War – indeed colonial and obsolete – arrogant view that we are an exceptional superpower to be worshipped and bowed down to in ethnocentric deference. We need allies in the spirit of equal partnership in pursuing common, good, positive, global goals of justice and peace – not in the spirit of treating other nations and global government bodies like our footstools and boot-licking servitude stooges.

And let us transform our society to embrace equality for all and heal our broken internal divides. They have sustained their shattered states of being too well, remaining in place since the 1970s and heightened in the 1990s, making us think we Americans are superior – or inferior – to one another due to our ancestry, colour, class, gender, religion, age or level of education. We have, painfully, seen and learned much over the past four years. As super-large, hormone-injected chickens coming home to roost, what happens when we are not genuine in our democracy proclamations,  when we indulge in cosmetic and symbolic rather than authentic justice and policy implementations, thus playing with inequalities rather than really dealing with them and ending them. It provided space for the governance leadership horror which has nightmared our nation and the world this four-year-long night, feeding on our worst prejudices, fears and proneness to violence and otherwise harming others and self.

Rather than pretending that this nightmare does not exist, we need to expose and get rid of the big-money interests that have come to erode and taint our free press, our free elected officials, our impartial  judges and justices, our free worship communities, our non-partisan federal civil service and access to quality employment,  healthcare, education and legal services. Our children, youth and older citizens deserve much better care and love, much more material support and, more than that, more attention and appreciation.

And whoever comes to power needs to know from those of us now wide-eyed and awakening – waiting in long lines to cast our votes and defying false, massive, mail-voting fraud claims – in mailing in our ballots anyway so that we will no longer be sleeping at the wheel.  We will never again indulge in taking our freedoms for granted, just to be exploited by a charismatic reality show and otherwise dictatorial cult-like leaders who come in from as high as the White House or everyday houses.

We will be demanding that those seeking political office will not just come around when they need our votes. We will no longer tolerate their hypocritical smiling faces, giving them donations and votes they plead for and see no results except broken promises and unanswered phone calls. We will demand each day that they somehow show they are working tirelessly on our behalf rather than vacationing with wealthy, special-interest sponsors.

Never again will we allow ourselves to be used as pawns by those who take oaths to represent us, but who – like in the worst and most corrupt so-called first-, second- or third-world countries – waste time, space and tax dollars while people suffer massively, whether due to the Covid-19 pandemic, ill-health and unnecessary death, substandard or no education, joblessness or lousy-paying jobs,  overpriced or poor housing, unjust incarceration, law-enforcement brutality and ruthless exploitation by banks and consumer businesses.

In taking this stand, we will take advantage of this unprecedented performance at the polls to ensure that justice for all becomes a real thing and that democracy will be the real thing for once and for all. Let us never allow this to happen to us again. Never. Ever. Again. Don’t do it again. Let us not let such a close call to losing who we are happen to us again. Never. Ever. Again.

And while we chant “Never Ever Again” in the privacy of our minds, hearts and homes and in the public spaces in our rallies and points made to the media, let us cease with the magical fantasies about the president in the White House as a saviour. Someone who will wipe away our tears and clean up after we make a mess. The propaganda stuff we teach other countries trotting after us, making us think democracy is like taking a magical pill and then it appears.

No matter who wins on Tuesday, hopefully sooner rather than later, we the people have to recover our striving for American values and norms of hard work, sacrifice, honesty,  altruism and integrity in our daily lives. This is not to make Trumpian America great again like in the old White-Supremacy days when white men and women  were the unquestioned monarchs  and those who were not white and poor systemically degraded and dehumanised.

It means – as the phenomenal casting of ballots in unprecedented  numbers exhibits – making America even better through empowering all of us through authentic, cultural inclusion in national governance and civil society in the multicultural democracy we already are. DM