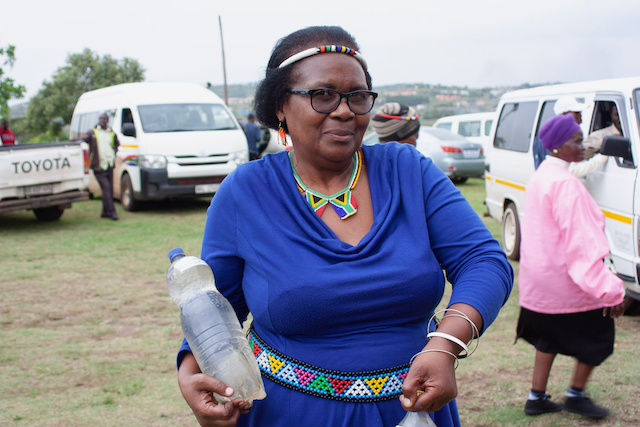 Fikile Ntshangase was part of a group taking legal action to prevent expansion of the Somkhele coal mine adjacent to Hluhluwe-iMfolozi Park in KwaZulu-Natal. (Photos: Rob Symons)

In an opinion piece, Mary De Haas has raised criticisms of the KwaZulu-Natal government and Tendele Mining following the assassination of rural land activist Fikile Ntshangase in the iMfolozi area of KwaZulu-Natal. Here they respond to some of the claims against them.

Tendele recognises Mary de Haas as a highly experienced monitor of violence in KwaZulu-Natal over many decades. She deserves much credit for the reduction of violence levels in the province over this time.

However, we are disappointed at the way she characterises the mine’s approach without any interaction or communication with the mine.

The mine’s management and shareholders would be very keen to benefit from her experience by engaging directly with her to seek her advice and guidance on how we could better achieve, cooperatively and peacefully, a meeting of minds with all stakeholders.

We were shocked and very saddened to hear of the brutal murder of Mrs Fikile Ntshangase. We express our sincere condolences to the family, friends and colleagues of Ntshangase, and hope that the SAPS brings the perpetrator or perpetrators to justice as soon as possible.

We reiterate our condemnation of any form of violence and intimidation in the strongest possible terms, including violence or intimidation directed against those who have opposed the work of the mine. If the murder has clarified anything it is that we, and all stakeholders, need to intensify efforts to reach a mutually satisfactory settlement with all parties on the way forward for the mine.

While the funders and shareholders are seeking to repay the significant debt that had to be incurred as a result of the Covid-19-related lockdown and return the business to sustainable profitability over time, we do understand our critical role to assist the surrounding communities with economic development and, at the very least, to ensure that their interests will not be harmed by our activities, including in the resettlement process which is necessary for the survival of the mine.

While there has been some antipathy towards the mine and its extension into new mining areas to sustain the current levels of employment and production, it is also the case that it is by far the largest source of economic development in the area and, we believe, its survival and expansion is supported by many others.

What we would like is an outcome where the mine’s plans can proceed, subject to any reasonable conditions that would address the concerns of those who are opposed.

Our legal advisors have approached the MCEJO advisors with a view to finding an amicable resolution for all interested and affected parties. We believe that only through dialogue and, if necessary, mediation can these complicated matters be resolved.

We are awaiting a response, and we trust that this will be forthcoming after Ntshangase’s funeral.

We deny that the mine has, as De Haas states, offered MCEJO members R300,000 to withdraw their cases.

What is correct is that the mine has offered compensation to the 145 householders who would need to be resettled to enable the survival of the mine. Negotiation since June 2017 resulted in 128 households accepting our offers over the past 40 months. These offers are based on evaluations of the structures (the land belongs to the Ingonyama Trust Board (“ITB”), although we believe the amounts offered are well in excess  of the actual value. The minimum compensation is R400,000 per householder, which includes homes plus various other considerations. The average compensation is R750, 000 per householder.

Each householder will be relocating to other ITB land in the Mpukunyoni Area  of their choice, at no cost for the land, having satisfied themselves on matters regarding adequacy of, for example, grazing-land quality and preferences on neighbours, and so forth. The overriding objective is that the quality of each household’s social and economic circumstances should be an improvement of their existing situation.

We remain ready and available to negotiate agreements with the 17 householders, through mediation, if preferred, who have not yet accepted our good faith offers. And, as we state, we would be grateful for De Haas’s advice on ensuring that the matter can be resolved peacefully and to the mutual satisfaction of all. DM

The Premier of KwaZulu-Natal Sihle Zikalala and Members of the Executive Council are deeply concerned by the murder of environmental activist Fikile Ntshangase, who was shot at her home at Ophondweni, near Mtubatuba.

Ntshangase is well-known as a principled environmental activist.  The government of KwaZulu-Natal is concerned about the manner in which her life was taken.  We send condolences to the family and relatives. The premier has, on behalf of the government, instructed the MEC for Community Safety, Bheki Ntuli, to appoint investigators who will leave no stone unturned in probing this murder.

The government is seriously concerned about the allegations that this was a planned hit.  It is the position of the KZN government that those who are responsible must be caught so that they can reveal their motive for this evil act, as well as who sent them, and that all the parties involved must face the music.

The government is working hard to bring peace and stability to the province. We cannot allow ourselves to degenerate into a lawless society, where anarchy reigns and differences of opinion are settled through the barrel of a gun.

The government has been involved in efforts aimed at finding lasting solutions to the challenges that are threatening peace and stability in the KwaSomkhele area and is concerned about recent developments and the growing reputation of the area as violent, unsafe and unstable.  The brutal and cowardly killing speaks of the barbarism and lack of humanity that exist within our society.

While we do not yet know the motive of Mam Ntshangase’s murder, we welcome anyone with information that may share light on the matter to come forward. The government is involved in facilitating peaceful resolution to many matters of dispute within the province.

In all dispute-resolution efforts, the government adopts an impartial attitude and is guided by the Constitution and rule of law.  Any conduct by any government facilitator that is seen to be ultra vires to this position must be reported accordingly.  In this sensitive time and moment of darkness for the Somkhele area, all sectors of society must be part of the solution.  Those with information must bring it before law enforcement agencies. If this cowardly use of violence was carried out to thwart the efforts for peaceful resolution of challenges, it will not succeed.  The people of KwaZulu-Natal are resilient and have demonstrated this in difficult times at the height of political violence which ravaged the province. This province is on the irreversible path to peace and our people are ready to thwart any efforts by the forces of evil to take us back to that sad history of violence.

Government has established a task team that will continue to engage with stakeholders in resolving any challenges or matters of concern from the community.  The law enforcement agencies must, and will, work tirelessly to resolve this murder.

What the government will not allow is for the area to become life-threatening to those who hold views that are not in tandem with mainstream thinking.  In the memory of Mam Ntshangase, all sectors of society should rally together to expose the perpetrators and ensure that this area does not descend to be a dangerous place for women and community members who participate in development issues. DM