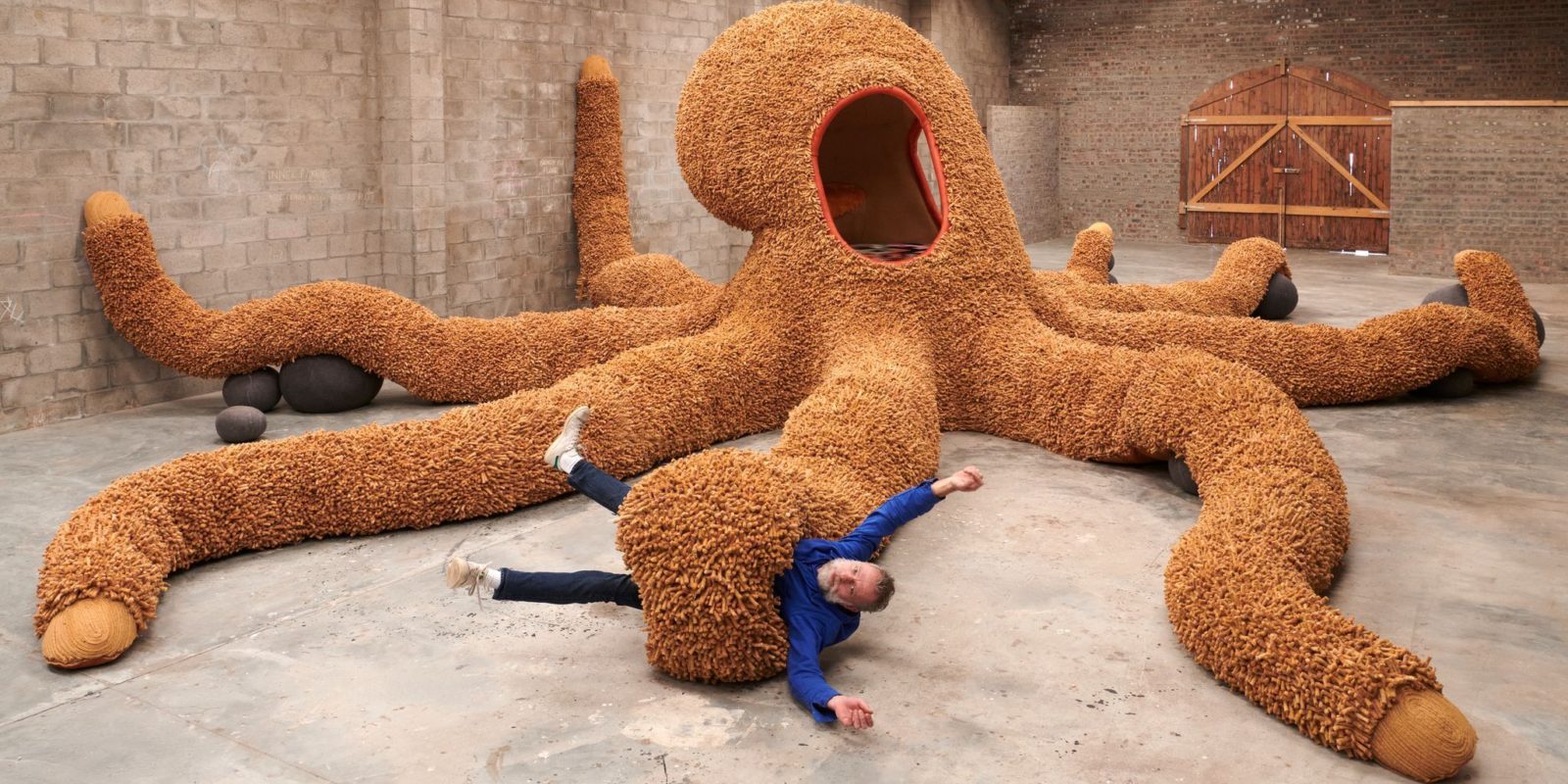 Over the past decade, multi-award winning South African designer Porky Hefer’s “nests”, or “environments” as they are sometimes referred to, have captured the attention of design enthusiasts locally and beyond. They have been exhibited at notable galleries and design platforms such as the London Design Biennale, Design Miami Basel, New York’s R & Company, as well the design collectibles gallery that represents him in South Africa, Southern Guild. During that time, these functional sculptural pieces have also evolved, as the designer experiments with material, shape and scale.

Initially they resembled nests much like that of weaver birds, albeit human sized. Hefer went as far as placing some in natural environments, suspended from trees, as nests for humans, as it were. By 2015, at his first solo exhibition, Monstera Deliciosa Vol. 1, held at Cape Town’s Southern Guild gallery, the materials, the shapes and the inspiration had changed.

The new designs became less like bird nests and more like isolated environments, little cocoons mimicking animal shapes, be it a suspended mouth of a crocodile, recreated in leather, or various other water-based creatures. What has been consistent in the evolution of the work is a reverence for the planet and the creatures we share it with, as well as a consistent message to remind us of our role in the destruction — or preservation — of the natural environment.

“Situated within the realm of mythological sea monsters, Buttpuss is imagined as a future giant of the ocean — her mutation fuelled by the colossal volume of cigarette butts that litter the sea.”

For his latest body of work, titled Plastocene — a word play on the present human epoch sometimes referred to as the Anthropocene or Holocene — soon to be exhibited at NGV (National Gallery of Victoria) Triennial in Melbourne, Australia, from 19 December 2020 to 18 April 2021, Hefer once again continues to evolve his work. Moving beyond the biomimicry of his previous pieces, he creates new environments by imagining fantastical creatures of the future that have mutated from trash; the plastic bags, cigarette butts, coffee cups and straws we throw out.

“I want people to realise that they too are part of the problem. The little things they do every day, the disposable items they use so often, the high cost of convenience. We need to challenge the current system, our habits and routines,” says Hefer.

The Plastoscene exhibition is made up of five pieces in total, but perhaps the most striking is Buttpuss, a 14m-wide and nearly 4m-high octopus-inspired environment. It is also the largest seating environment the designer has made.

“The scale was definitely intentional. The four smaller ones were designed to fit through the door to the room in the museum. With Buttpuss, I wanted something bigger to fill the large room I had been allocated, but to also push myself to try something new. I love architecture, structures, environments. My designs don’t just have to be chairs, they could be homes,” explains Hefer.

“Situated within the realm of mythological sea monsters, Buttpuss is imagined as a future giant of the ocean — her mutation fuelled by the colossal volume of cigarette butts that litter the sea.”

To create “her”, Hefer worked with a team of crafters across several studios. African Karakul was “laboriously rolled, soaped, twisted, shrunk and dyed” by more than 30 women, resulting in the thousands of hand-felted “cigarette butts” that make up the surface of Buttpuss.

The piece is at once beautiful and discomforting as a reminder that, as reported by the World Health Organisation, “cigarette butts are the most commonly discarded piece of waste globally and are the most frequent item of litter picked up on beaches and water edges worldwide”.

The four smaller pieces continue the theme. Flat White, a life-size sea-creature made of leather, faux leather and sheepskin, seemingly mutated from a coffee cup, with fins to match, is a gorgeous — and haunting — reminder of trash created through the use of take-away packaging. The designer also dabbles in a bit of anthropomorphism in its design. Explains Hefer: “Flat White’s downturned mouth evokes sadness, vulnerability and horror, which establishes empathy in the viewer. The creature’s expression is reminiscent of a filter feeder such as a whale, and it is easy to imagine Flat White swallowing the very cup she depicts.”

Another piece, Q-tip; as the name suggests, is inspired by and evolved from the cotton buds we might rarely imagine outside the bathroom setting, as a “reminder that the ocean is the ultimate destination for all kinds of non-biodegradable waste that does not get recycled”. The piece itself is made of several repurposed materials, from a recycled advertising banner, T-shirt offcuts, recycled polyester stuffing, through to salvaged hand-tufted silk carpets.

The fabrication of the body of work took about 80 crafters from October 2019 to July 2020 to complete.

“We had to deal with quite a few issues that held us up, but we managed in the end. Apart from one of the harshest Covid 19 lockdowns, we had to deal with load shedding, but as we were working by hand, we were able to just work through the power cuts whilst most other businesses had to stop completely. It’s quite amazing what we achieved with these factors working against us,” says Hefer. “It’s actually been incredible. I have managed to do what I consider some of my best work to date.” DM/ML