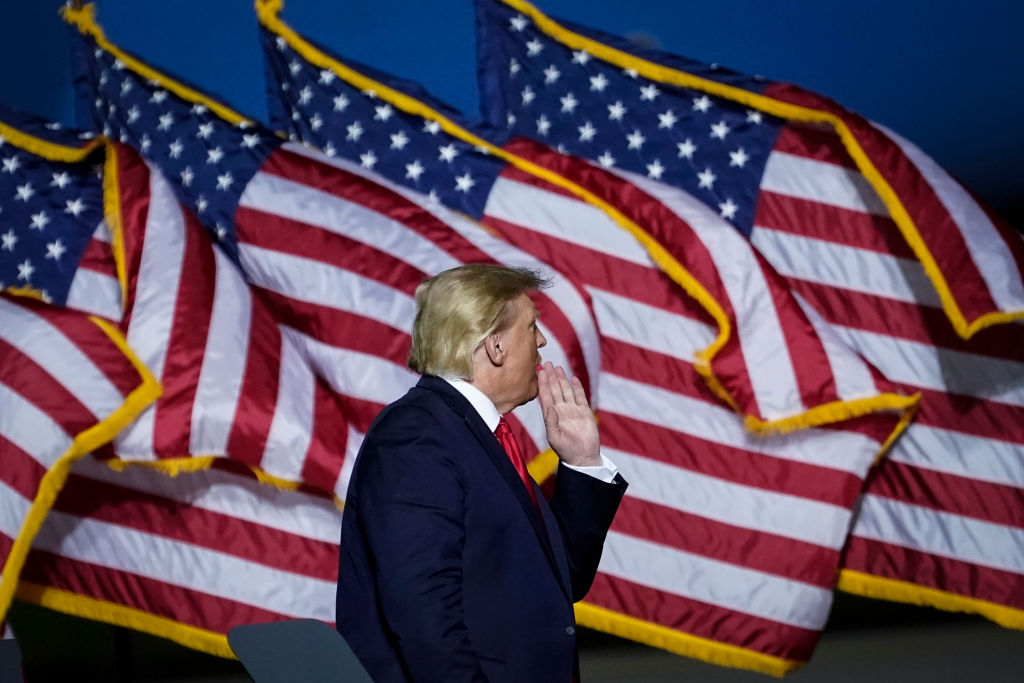 The US had some tense moments at the weekend, with Donald Trump supporters using bullets and blocking highways to show their unhappiness at Joe Biden’s (slim) lead in the polls the day before the unprecedented presidential election.

With time running out for Americans to cast their vote on November 3 in the US 2020 election– if they have not already done so – the country is tense and emotions are running high. In Topeka, Kansas, a local news organisation reported that three people were in hospital on Sunday after a shooting occurred because of  Donald Trump signs being “stolen” from the lawn of a Trump supporter. Topeka police say the shooter told them he thought he had found the people responsible for making his signs disappear.

All around the US over the past few months, signs with “Vote Trump” or “Vote Biden” or just the name of the person being supported, have sprouted on lawns as voters made their choice of 2020 presidential candidate known. As polling shows Biden leading, more and more Trump supporters are showing open hostility to Biden supporters.

An FBI spokesperson has confirmed that an investigation has been opened

after a convoy of Trump supporters surrounded a Biden campaign bus in Texas on Friday, 30 October. The bus was on its way from San Antonio to Austin when it was tailgated and surrounded by vehicles with “Trump 2020” flags, forcing the bus to stop.

Later that day, Trump posted a video of the incident to Twitter with the comment, “I LOVE TEXAS!” celebrating the fact that the Biden campaign’s planned visit to Austin had been derailed. The incident occurred on Interstate 35 (I-35) and caused at least one collision.

On hearing about the FBI investigation, Trump was quick to tweet that “in my opinion, these patriots did nothing wrong”.

Trump supporters also took to the highways in New York on Sunday, blocking the Governor Mario M. Cuomo bridge which crosses the Hudson River from New York to northern New Jersey. They brought interstate traffic to a standstill, as did other supporters who blocked the Garden State Parkway south of New York.

Texas, with 38 electoral college votes, is an important state for both candidates to win – Trump cannot win without Texas and Biden would cement a win if he wins in Texas. While Texas has been a red state since at least 1994, it has seen a huge increase in new, young voters this election, as has Georgia. If Georgia, Arizona and Texas flip from red to blue – that will be all Trump wrote and team Biden/Harris will be moving into the White House in 2021.

Biden appears to have a slight lead over Trump based on a variety of polls by different organisations and in different states, including Texas. In the record-breaking early voting season the US is experiencing this year, Texas has almost surpassed its entire number of ballots cast in 2016. Despite surging Covid-19 cases, a whopping 57% of registered voters had voted by Saturday, just 2% less than the total voter turnout in 2016.

Around the country, some 93 million Americans have already voted, taking advantage of their early voting and absentee mail in ballot options. Absentee mail in voting has been largely driven by fear of the coronavirus, which is surging around the country as winter bears down on the northern hemisphere. Fear around personal safety is also on people’s minds as they look out for voter intimidation and voter suppression. Militia groups supporting Trump have been highly visible at various polling places, toting/touting large rifles out in the open as they do as the president asked and “go into the polls and watch very carefully”.

With France and Germany in new lockdowns after spiking Covid-19 cases, Trump has criticised them for taking the measures, while continuing on the campaign trail without a mask. A new study by Stanford University shows that Trump may be responsible via his campaigning which ignores physical distancing and does not require mask-wearing, to have caused 30,000 cases and more than 700 deaths. The paper is yet to undergo the peer-review process, but Trump continues to draw criticism for refusing to wear a mask and not encouraging mask-wearing.

With the coronavirus surge and Trump determined to hang onto the presidency, telling the media on Sunday that “as soon as that election is over we’re going in with our lawyers”, Americans seem to be in for a long, hard winter. DM