Respect the critical role teachers and principals play, and stop treating them as commodities 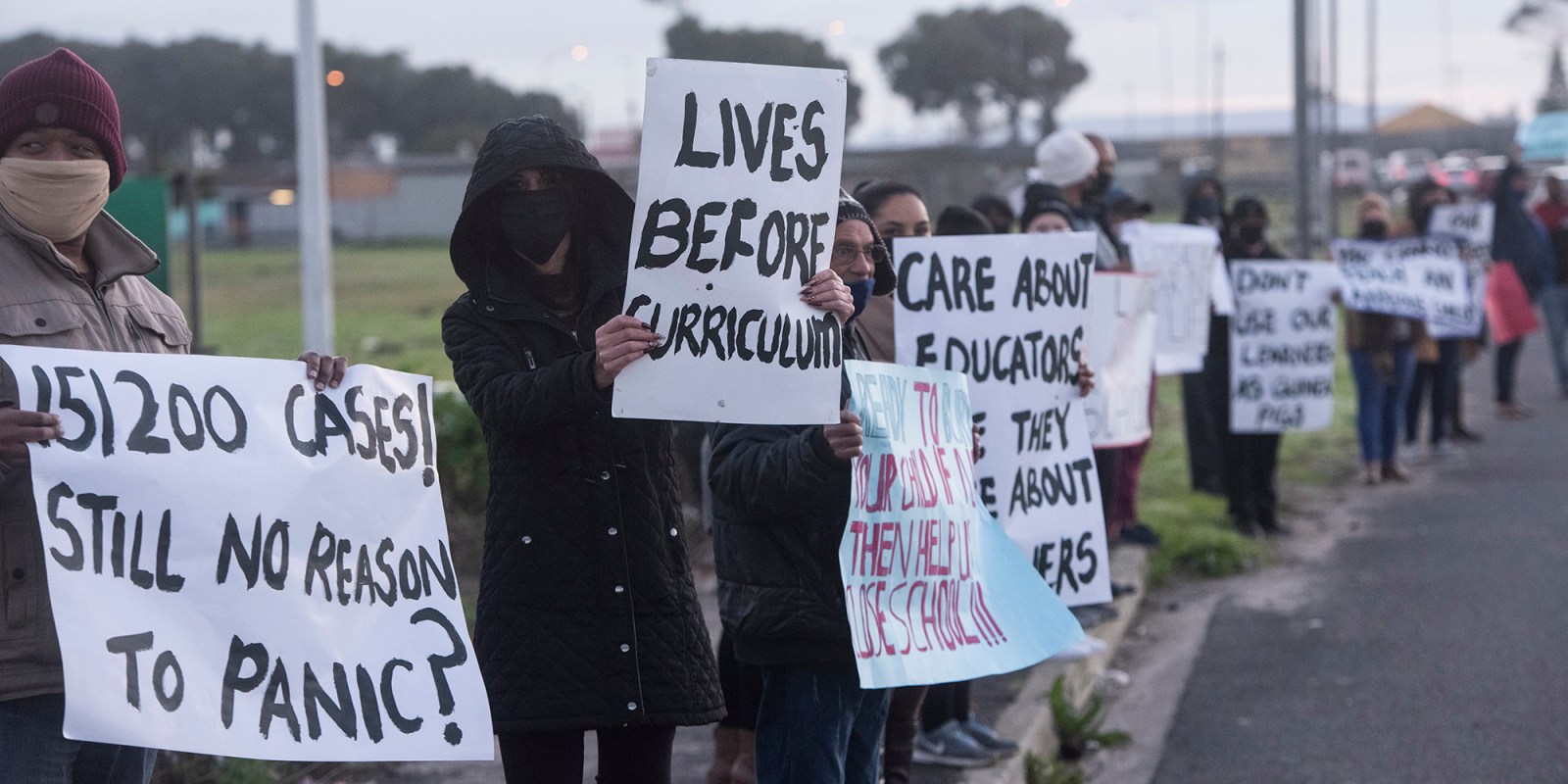 At the height of the Covid-19 pandemic lockdown, when the Department of Basic Education rushed to reopen schools 'by hook or by crook', some teachers and pupils took a firm opposing stand by taking to the streets. (Photo: Gallo Images/Brenton Geach)

The principal of Heathfield High in Cape Town, Wesley Neumann, faces disciplinary charges from the Western Cape Education Department for resisting departmental attempts to prematurely open the school under Covid-19 strictures. Neumann’s story brings to the fore questions concerning the role of the teacher and invites us all to take up a position of solidarity for the sake of good teachers everywhere.

Good, critical teachers are under threat. When, instead of working with local schools and their communities, a culture of top-down disciplinary government becomes the default we have to ask: who does the school serve?

At the height of the Covid-19 pandemic lockdown, when the Department of Basic Education (DBE) rushed to reopen schools “by hook or by crook”, some schools took a firm opposing stand by taking to the streets in picket action and by writing open letters to the DBE and Western Cape Education Department (WCED). Among them was Heathfield High School, a working-class school that had already been engaged in contestation over the inequitable quintile-based school funding model which places most schools at a severe disadvantage, and which had fought for 12 years for the erection of a secure perimeter fence.

Heathfield High School attempted to resist the WCED. The principal, Wesley Neumann, acting with the support of the school governing body (SGB) and the broader school community, wrote to WCED head of department Brian Schreuder, explaining why the school would not be ready to reopen. While the teachers were present at school to receive learners, picket actions took place in the mornings as the school attempted to raise concerns about the safety of learners, teachers and elderly carers, about the impracticalities of reopening due to staff shortages (at one stage only one cleaning staff member was available to sanitise the entire school), and about space constraints in the face of regulations requiring physical distancing.

Neumann now faces several disciplinary charges from the WCED, and the school has formed the “Heathfield High School Action Committee” to mobilise support for their principal, whom the community do not want dismissed. Heathfield High’s story brings to the fore questions about the role of the teacher today and highlights piercing contradictions which must be brought to light. The fight also invites us all to take up a position of solidarity for the sake of good teachers everywhere.

The role of the teacher in the 21st century

In this narrow vision of schooling, the teacher, as employee is accountable only to the state from which the teacher receives commands and instructions on what to do and how to do it. While this vision of schooling may cause ruling-class market forces to salivate, parents, learners and concerned citizens should ask: is this the kind of teacher we desire for our children? And will this lead to the quality of education that will be most beneficial to them?

The role of the teacher must then be recast in relation to these forms of bottom-up and democratic accountability. The teacher cannot simply carry out commands when such commands are in conflict with the concerns of the community. For this reason, teachers must be empowered to make decisions on the basis of professional judgment as intellectuals grounded within a local context, through democratic processes, providing such decisions do not infringe on the rights of others or unfairly discriminate against any individual or group of people.

The teacher is not simply an employee of the state but also a community leader of sorts. Perhaps the reason teachers are so disrespected today is because they have been straitjacketed in their role as employees, completely alienated from the needs of their learners and the concerns of the broader community, and the moment they attempt to break from the straitjacket they are disciplined by their line managers.

At times, like this time of the pandemic, the concerns of the community are in conflict with the interests of the state and the market forces to which it is beholden. The rush to reopen schools during the pandemic has seen the realisation of what scholar-activists, teachers and concerned community members have predicted: schools of the working-class suffer broken rhythms of teaching and learning while the threat of Covid-19 continues to loom.

When a community comes together to take a position and say that they are not ready to accommodate all learners at a school because of staff shortages, because of space constraints, and because of risks to elderly carers of learners, who has the first right to decide how to proceed? The learners, teachers and parents who will suffer the consequences of any decisions made? Or departmental officials who make calls from a distance and who do not experience firsthand the effects of any order that is issued?

In crisis moments like these, perhaps the only reasonable way forward is to trust in democratic process and to engage in dialogue, rather than adopting a strategy of power-mongering that proceeds from a “by hook or by crook” logic.

If teachers are not allowed to think and act critically, and if there is no room for a teacher to take up oppositional stances concerning school matters, can we really argue that what we have is a “democracy” and not a dictatorship? And if teachers are dissuaded from critical engagement in the public sphere, what implications might this have in the classroom, where the hope is that children will learn to think “critically”?

These are the (impossible) decisions with which Neumann was faced. His decision to contest departmental decisions for the sake of school and community safety, with the support of the SGB and parent body is now being met with a barrage of charges. Neumann tried to break from the straitjacket and now he is being disciplined. Yet, the story is not only about Neumann, for Neumann is a symbol of every teacher who seeks the best for their learners but who suffers the pain and angst of occupying a conflicted role and who is locked into a system that prevents them from doing right by the children, youth and communities they serve.

Much changes, but much remains the same

Today’s contradictions are not recent developments – they are the same contradictions rearticulated within the framework of neoliberal capitalism. The critical teacher and school leader was always under threat. In the past, this threat appeared in the form of surveillance from security police, redeployment and at times even the threat of physical violence.

Today these threats reappear in the form of surveillance through administrative procedure and assessment, through bogus charges and the risk of job loss. The critical teacher in South Africa has always been faced with the tough choice of obedience and conformity (and living with the psychic pain of moral anxiety) or disobedience and resistance (and having the moral higher ground but paying the price for it).

It is horrific that in a place where critical teachers of the past are celebrated for their part in beckoning a so-called “new South Africa”, critical teachers today are faced with the very same call to martyrdom that characterised the life of the teacher under the “old” regime. The call to teach will always be a call to live for our children, but it need not be a call to martyrdom. For this reason, we must fight back, so that we can realise the day when we need not add the prefix “critical” when talking about such teachers, and when we will recognise such teachers simply as good quality teachers because this is what they are.

We call on WCED MEC Debbie Schäfer and Brian Schreuder: