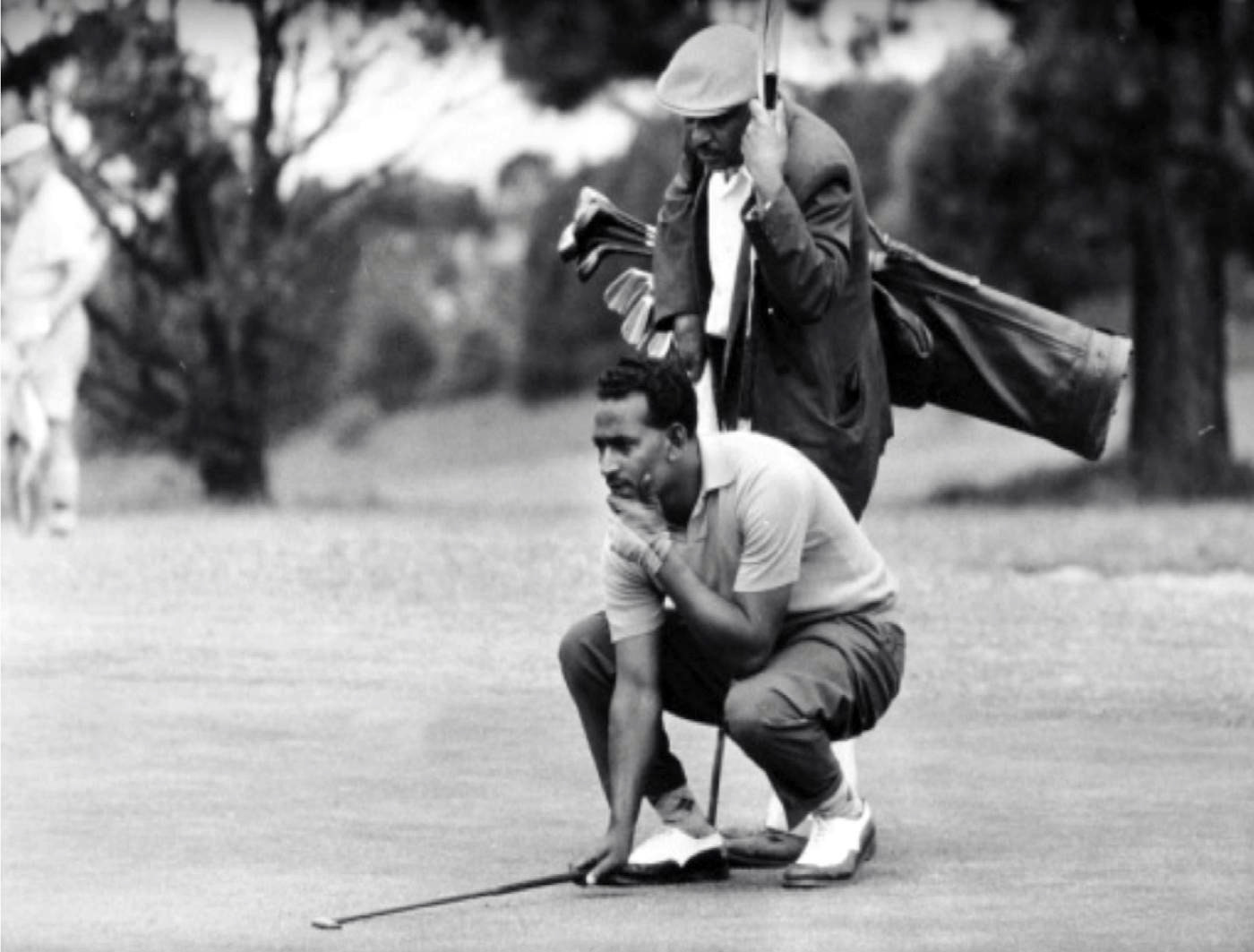 The remarkable story of Sewshanker ‘Papwa’ Sewgolum has been brought to life in a riveting book by Barry Cohen titled Let Me Play. (Photo: Supplied)

The remarkable story of Sewshanker ‘Papwa’ Sewgolum has been brought to life in a riveting book by Barry Cohen titled ‘Let Me Play’.

Sewshanker “Papwa” Sewgolum spent much of the day on 22 January 1965 in mellow mood, fishing the Umgeni River. Unlike Gary Player, who spent the day practising with customary zeal, Sewgolum preferred to keep his preparation for the following day’s Natal Open relaxed.

He wasn’t playing good golf, he knew that, and before teeing off the next day he was sure to be stretched on the usual rack of petty apartheid humiliations. He would change in his car, nibbling sandwiches and sipping Thermos-flask tea prepared by his wife, Suminthra, because he wasn’t allowed into the Durban Country Club’s changing rooms.

He couldn’t enjoy lunch in the clubhouse and couldn’t order a beer at the bar. For his ablutions, he would join the caddies in their segregated facilities round the back. Same old shit, different day.

On the morning of the Open, Sewgolum parked his car in the Country Club parking lot, running off to do a quick errand. When he returned an Indian mynah with a broken neck was wedged beneath his windscreen wiper. He had seen far worse, he reminded himself, he wasn’t going to break stride for a dead bird.

Despite being the best golfers of their generation, Sewgolum and Player didn’t often find themselves in the same tournaments. Player, at the height of his fame in 1965, spent much of the year campaigning overseas, while for Papwa, it was always moot whether he’d be allowed to participate in tournaments reserved for whites.

Rare opportunity to compete against whites in SA

This time round, the authorities decided to look the other way. They had been embarrassed by the photos (syndicated around the world) of Papwa receiving his trophy in the pouring rain after winning the 1963 Natal Open, and were determined not to be shown up a second time. Papwa could play.

There were golfing considerations to consider, anyway, and they were curious. Although a wisp of a man, Sewgolum’s short game was immaculate. He had walked Durban’s courses many times as a caddie, and his depth perception was uncanny.

Player could muscle his ball further down the fairway but Papwa, with his quick hands and preternatural ease, was impeccable in his approach play. If the rain held off and the humidity didn’t become too draining, they had three days (a double round was scheduled for day three) of potentially brilliant golf to look forward to.

Country Club management weren’t the only ones to lick their lips at the impending Sewgolum versus Player duel. Indians from far and wide flooded on to the course at the beginning of the third day to cheer their hero.

Sewgolum, the illiterate son of indentured labourers, who lost his father when young, was taking on arguably the best player in the world at the time in Player. The “Black Knight”, as Player was sometimes called, had himself suffered hardship while growing up, losing his mother early and often returning to an empty house after a long journey home from school. He cooked his own supper because his father worked night shifts on the West Rand mines.

Sewgolum’s fans broke course protocol, spilling off the designated pathways and moving and heckling as golfers cradled over their putts. Player became annoyed as he remonstrated with course officials; Sewgolum, hitting the ball as sweetly as ever, put the Indian mynah incident behind him, seeing off a late gallop by Harold “the horse” Henning.

Dare the 7,000 Indians, who packed the fairways overlooking the Blue Lagoon estuary, hope that their man would win?

At first, it seemed not. Player charged into a three-shot lead at the beginning of the fourth round before losing his ball on the fifth and suffering a two-shot penalty. Player muttered; the vervet monkeys in the treetops muttered with him. He regained his composure, but now Sewgolum, with the trademark reverse-handed grip, was on the charge.

In drizzle he eased past Player, taking a two-shot lead on to the 18th hole. Player needed to hole a 10-foot putt to force a playoff, but after appearing to be on track, the ball swerved wide. “Papwa chipped like a genius,” said Player, who tied for second with Henning. “Every time I thought he was in trouble, he pulled one out of the bag.”

SABC Radio neglected to cover the Natal Open, writes Barry Cohen in his fascinating new book about Papwa, Let Me Play, arguing that the event constituted “mixed news”. Such neglect meant that Papwa was, officially at least, doubly invisible.

Not only was he told where he could live and play by apartheid officialdom, but the mainstream white media seldom deemed his achievements worth covering. Paradoxically, this only increased his status, which made news of his win against Player in 1965 all the more precious. Without intending to, Papwa, the most apolitical of men, became a magnet for the political desires of the oppressed. He was cherished like an angel.

Local Indian fans had watched carefully since Papwa won the Dutch Open in 1959. His farewell was held at Sir Kumar Reddy School Hall by the Durban Indian Golf Club, where he was honoured, according to Cohen, with a club blazer. In gestures of almost religious fervour, those blazer pockets “were stuffed with cash”.

After Sewgolum had won in The Hague the news spread like a cheerful mist. When his plane arrived back home, tens of thousands lined the road, cheering as the Sewgolum cavalcade returned to town.

India knew about Sewgolum too. The famous photograph of him receiving his trophy outside in the rain caused a sensation there, Cohen arguing that it so outraged India’s sports’ authorities that they actively campaigned for South Africa’s expulsion from the International Olympic movement.

India had her star system in the 1960s, but Bollywood was in its prehistory. Raj Kapoor was famous, and playback singer Lata Mangeshkar, who sung prerecorded songs for the Indian film industry, was a darling in a million homes.As far as sportsmen and sportswomen were concerned, the biggest stars were Leslie Claudius, the field hockey player, and the cricketer Farokh Engineer, but Sewgolum wasn’t far off the pace.

His exploits were carefully followed. He was perhaps the first truly pan-Indian sporting star.

The reverence with which he was held in India culminated in him being offered the role of course professional at the Royal Calcutta Golf Club, the first time anyone outside India had been asked to fill the position, but at Suminthra’s insistence, he turned it down.

Such is the coda to Sewgolum’s tragic story. He was oppressed in the country of his birth but was perversely loyal to a country that decreed he had to change in his car for a round of golf on a white course. He died a broken man, aged 49, in 1978. DM168

Let Me Play: The Sewshanker ‘Papwa’ Sewgolum Story, self-published by Barry Cohen, is available from all good bookshops