US Elections: Just days to go – and the country is ho... 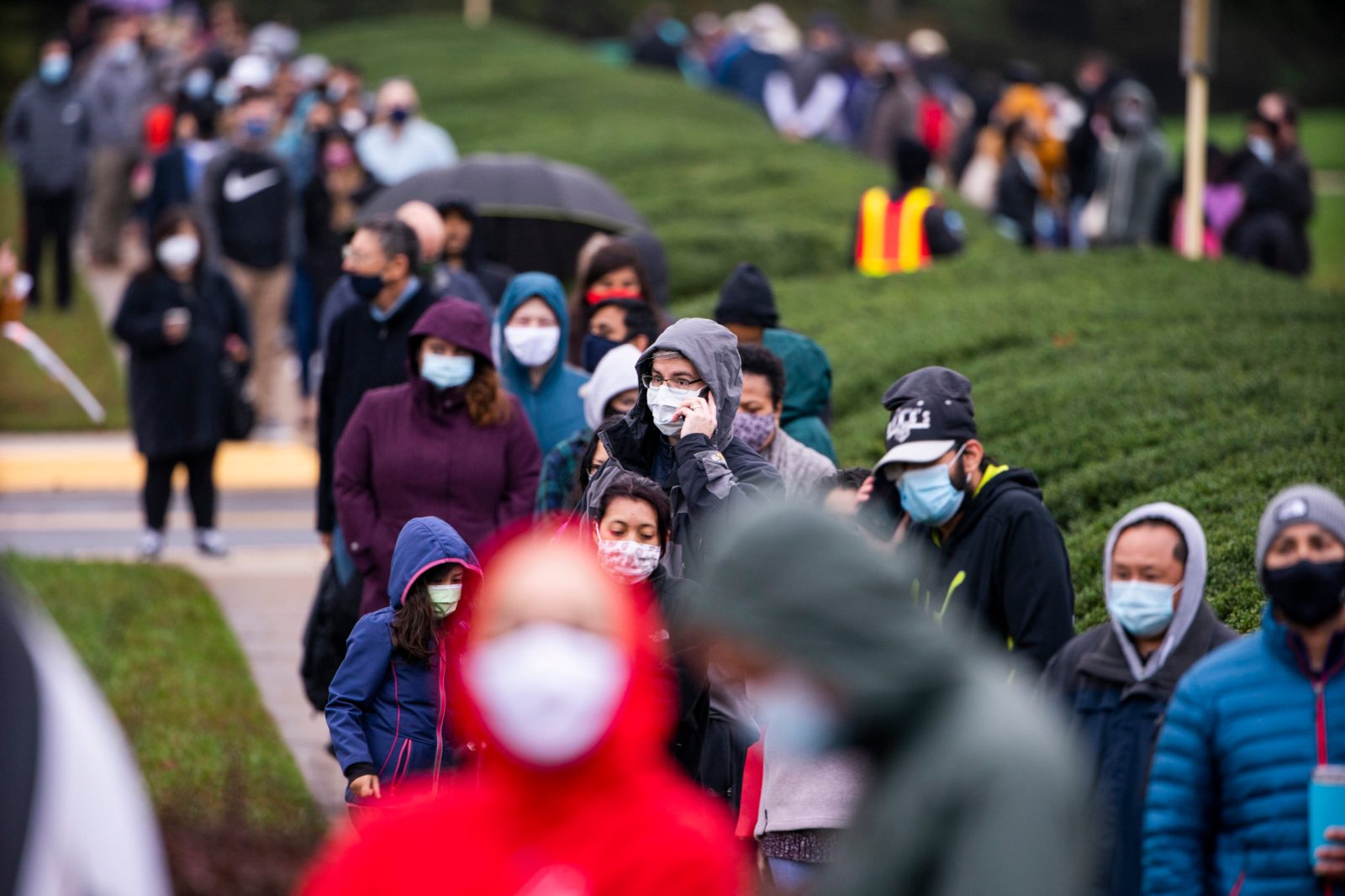 Voters wait in a light rain to cast their votes for the 2020 presidential election at the Fairfax County Government Center in Fairfax, Virginia USA, 30 October 2020. Early voting in Virginia, which began on 18 September, ends on 31 October. EPA-EFE/JIM LO SCALZO

With record-breaking early voting numbers, Daily Maverick spoke to a few American voters to try to understand why they will vote Democrat or Republican. We spoke to both ‘blue' and ‘red' voters, and we could not find undecideds anywhere.

Emma DeLaRosa is an 18-year-old first-time voter. She is excited to vote and impact on her country’s future. A Latina and first-year student, she is majoring in political science and media science at Boston University.

DeLaRosa is an intense and engaging young woman who is very focused on her studies. At high school she was a member of the National Honor Society – which means she maintained a cumulative Grade Point Average (GPA) of at least 85%.

Citing the handling of the pandemic and the protests sparked by the killing of George Floyd, DeLaRosa says the country needs a change:

“I’ve been really critical of the administration the past four years, especially recently with how they’ve handled the pandemic and how they handled the recent political and civil unrest … He just doesn’t align with anything I believe in.”

DeLaRosa says she is not so much voting for Biden; rather, she is voting against Trump:

“Even though Joe Biden wasn’t my first choice … It’s the only option we have now to make a positive change.”

Samantha (a pseudonym. She’s concerned she might lose clients if they know she votes for Trump) is a white, 53-year-old small business owner with a bachelor’s degree in communications. She runs a Pilates studio.

Samantha has a charming manner and laughs easily as she describes what she does: “It is gratifying and social and fun … It’s neat to see physical change, and emotional and spiritual. It’s really interesting on many different planes.”

“I was very impressed with the fact that he was not attached to any money groups – so he was sort of beholden to no one.”

She is pleased that Trump won:

“I’m happy with my choice. I know that’s not the politically correct thing to say and I don’t know that I would say that publicly in front of my clients and so on, but I think that he’s come through on a lot of the promises that he’s made and some of the things that he has done resonates with me.”

What has he done that resonates with her? “… criminal justice reform, um, particularly creating permanent funding for black universities and colleges … and creating investment opportunities in different minority communities.”

She also says he has performed well in the area of trade:

“I’m quite pleased with his trade policies, confronting China and kind of forcing them into a bargaining posture with us … trade deals with allies.”

It’s not all roses: “I don’t think I’d have the guy for dinner … I think he’s a narcissist and I think he’s belligerent … I’ve overlooked some of those things.”

About Twitter she says: “The tweeting is annoying but I also understand that some of that tweeting is so that he can communicate directly with the American public … I think the media is quite biased against him.”

She is concerned about Covid-19, saying “the coronavirus … that hasn’t been a great response”.

At the other end of Connecticut is Steven Becker, a 77-year-old active commercial real estate broker and life-long Republican who voted for Trump in 2016. He just sold his property and is planning to move to Florida.

“My background is very similar to Donald Trump’s, particularly regarding his early education …  and neither of us ended up going into the military … but I related to many of the positions that he took.”

In 2020 he is voting Trump because “functionally the dictates of the Republican Party and my own thinking are similar to Donald Trump’s”.

Becker, who is Jewish, says:

“I’m concerned about another four years with Donald Trump because of the chaos he breeds. He loves the power and the glory that goes with the job, but in my opinion he has not learnt presidential diplomacy …”

Joyce Brewer says she has to put coronavirus above race when asked about Trump’s biggest presidential failure: “I mean, the deaths alone are staggering.”

Brewer is a 47-year-old African-American woman who lives in Atlanta, Georgia. A self-employed writer and content producer with a master’s degree, she voted for Hillary Clinton in 2016.

She has already cast her 2020 ballot: “I voted for Joe Biden and Kamala Harris.”

Brewer says Americans want change: “They don’t want this pandemic to continue … people are worried about their health, the economy, the climate – political and environmental – it’s just rough right now.”

He voted for Trump in 2016 because of “Supreme Court Justice domination”.

“I want Supreme Court justices who are originalist … who make decisions based upon what the constitution says, not what they may wish it says … I’m delighted over Barrett.”

But, he says: “I wish he would stop with the freaking tweets! And he can be a bit of an asshole at times …”

Parker says Trump is probably reacting to the fact that people want him out of office, however. “I wish he would … try and have a little more presidential demeanour.”

A veteran who served as a US army combat photographer in Vietnam, he is happy that Trump “certainly improved the Veterans’ Administration, got rid of a bunch of people who did not know what they were doing … ”