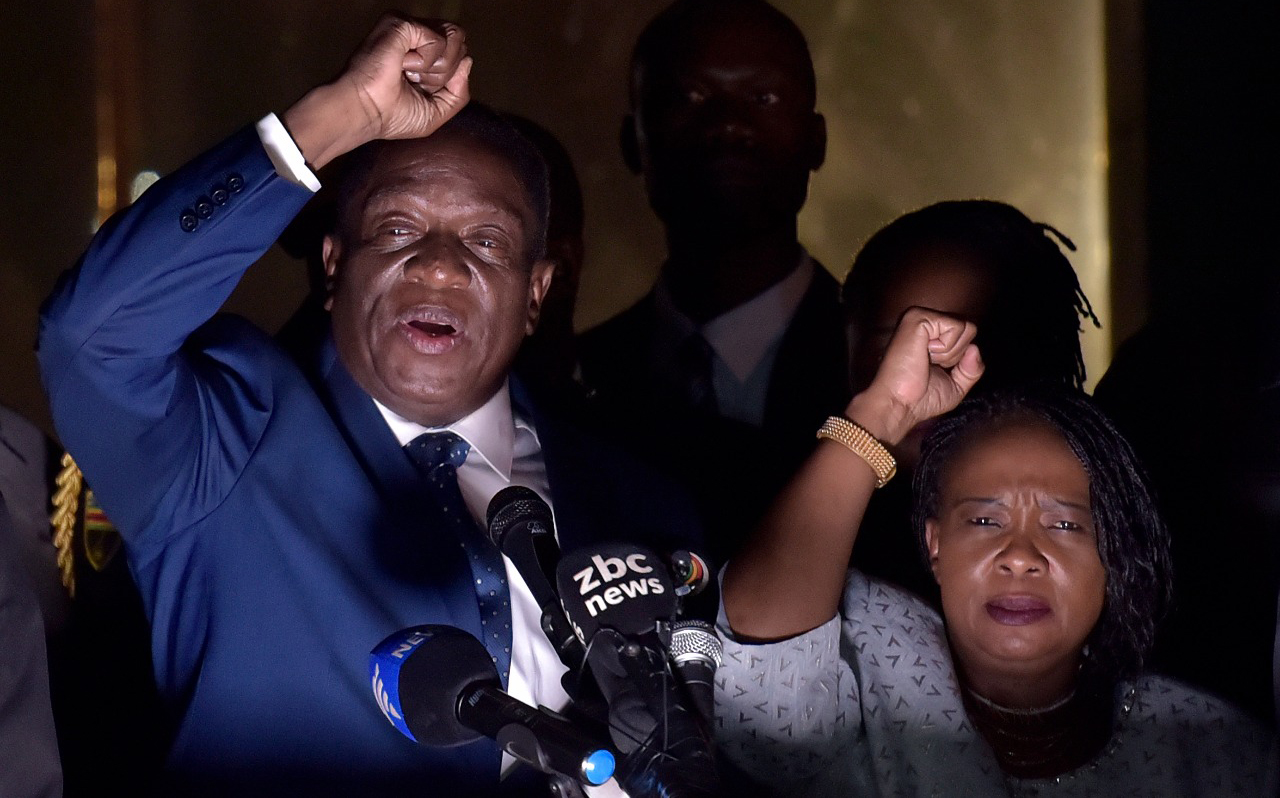 President Emmerson Mnangagwa with his wife Auxillia addressing the people of Zimbabwe at the Zanu-Pf headquarters on November 22, 2017 in Harare, Zimbabwe. (Photo by Gallo Images / Netwerk24 / Felix Dlangamandla)

Her husband, President Emmerson Mnangagwa, has repeatedly called for a zero-tolerance to corruption that he claimed has negatively impacted on the country’s economy.

The First Lady’s involvement in the shady deal came to light during court proceedings on Friday when a ruling Zanu PF top official Henrietta Rushwaya, who is also president of the Zimbabwe Miners’ Federation, and her accomplices, were arraigned before a Harare magistrate on charges of smuggling 6 kilograms of gold worth US$330,000. Rushwaya was arrested  on Monday at the Robert Gabriel Mugabe International Airport when she was about to leave the country for Dubai, after she failed to produce an export permit for the gold that was discovered in her hand luggage.

Two of Rushwaya’s accomplices are President Mnangagwa’s security aides who stand accused of attempting to facilitate Rushwaya’s exit at the airport before she was arrested by alert security details. Two other police officers were also arraigned for allegedly criminally abusing their offices after they allegedly tampered with court papers with a view to exonerate one of Rushwaya’s accomplices, businessman Ali Mohamad who reportedly runs some of the First Lady’s businesses.

Upon her arrest, Rushwaya allegedly implicated Mohamad, who also runs a car sale business under a company called Ali Japan 786. The prosecution, led by prosecutor Garudzo Ziyaduma, told the court that Rushwaya claimed that she had been given the gold by Mohamad for onward delivery to his Dubai-based sister company.

The prosecution alleged that Rushwaya and Mohamad hatched a plan to smuggle the gold to Dubai on the pretext that the gold bars were going to be delivered to Mohamad’s other company based in Dubai, adding that Rushwaya had no license to export gold at the time of her arrest.

Meanwhile, the court heard that one of Rushwaya’s accomplices, Gift Karanda, linked First Lady Auxillia Mnangagwa to the ownership of the minerals.

“On discovering that the three had been intercepted, accused 4 (Gift Karanda) came and advised immigration and police officers that the gold recovered from Henrietta Beatrice Rushwaya belonged to the First Lady Auxillia Mnangagwa. He further stated that Collins Mnangagwa, son to the First Lady, was the person who was supposed to have taken the gold for export to Dubai, United Arab Emirates. This accused (4) said well-knowing that it was not true but only wanted to instill fear and facilitate safe removal of the gold from Zimbabwe to Dubai,” said Ziyaduma.

(It appears here that the prosecutor is attempting to exonerate the First Lady in his papers by opining that the accused no 4 was lying knowingly.) 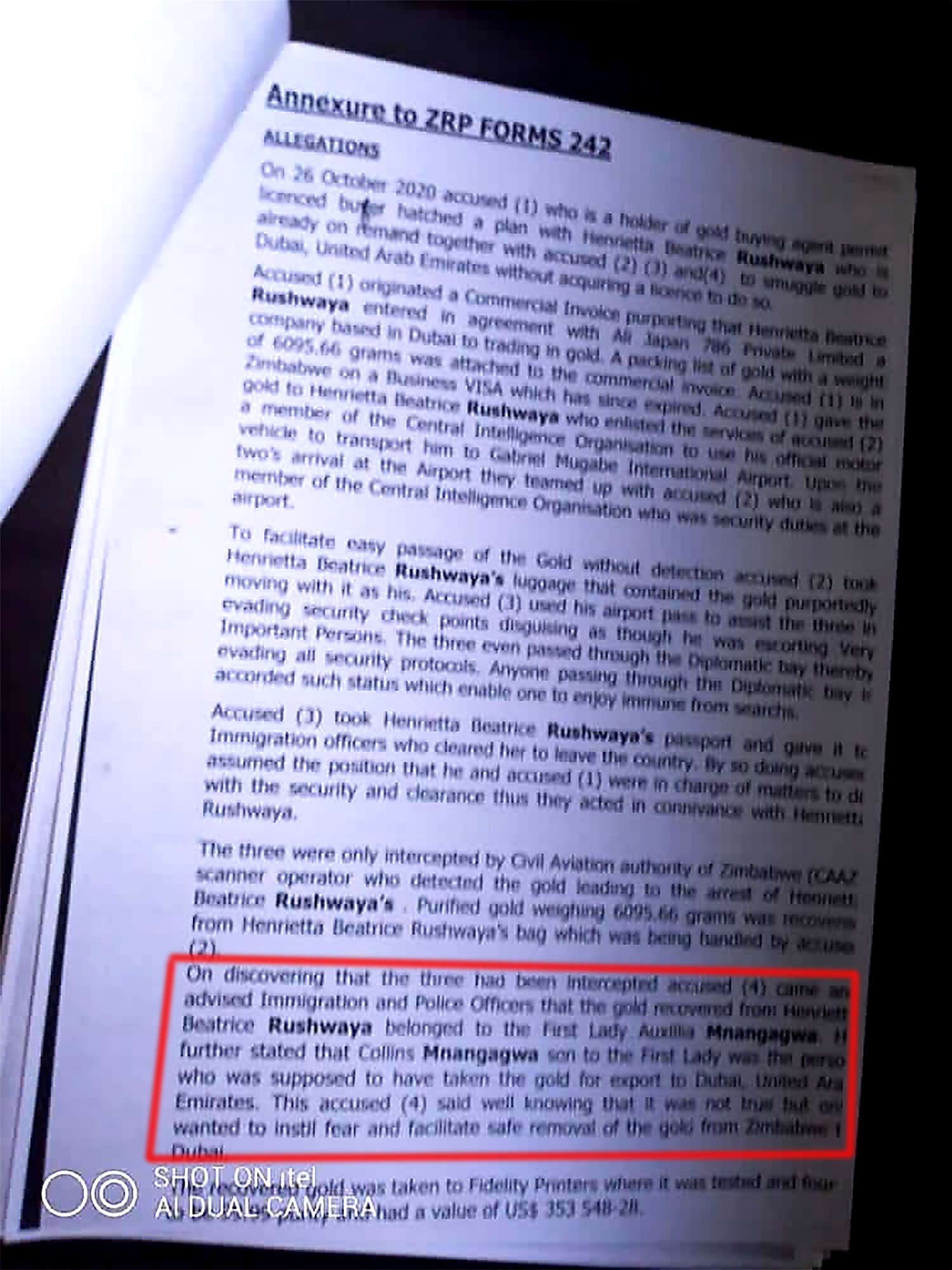 During the proceedings, Mohamad’s attorney, Tinashe Tanyanyiwa, challenged the placement of his client on remand saying his company had a legitimate gold buying permit while the rest of the accused persons did not object to their placement on remand. Bail hearing is expected to continue on Monday.

President Mnangagwa’s family has been linked to such scandals. The first family was recently linked to a US$60 million scandal involving the purchase of Covid-19 supplies that resulted in Mnangagwa dismissing his health minister Obadiah Moyo.

Clifford Hlatshwayo, a spokesperson of the main opposition Movement for Democratic Change Alliance (MDC), said while President Mnangagwa has used every available opportunity to denounce corruption, he and his party were the “archbishops of corruption.”

“Mnangagwa and Zanu PF are the archbishops of corruption and violence; they rigged their way into power to loot, to cause harm to the ordinary and bleed the nation.”

The latest exposure comes at a time when Zimbabwe’s Home Affairs minister Kazembe Kazembe told reporters a fortnight ago that the southern African nation was losing over US$100 million per month due to illicit financial flows in the gold sector alone.

An independent economist, Masimba John Manyanya, who once worked with Zimbabwe’s finance ministry said Zimbabwe’s economy was in the wrong hands.

“We can’t blame sanctions when the biggest sanction we have is corruption by those in power. Zimbabwe is losing over a billon US dollars every month due to these illicit financial flows if we are to go by what the government is saying. Former President Mugabe said that US$15 billion from diamond proceeds cannot be accounted for up to this da,y yet we want to blame sanctions for economic problems of our own making,” said Manyanya.

This is not the first time a First Lady in Zimbabwe is linked to deals involving minerals. Auxillia Mnangagwa’s predecessor, Grace Mugabe scandalised the country when she ordered a US$1.4 million diamond ring from Dubai.

Mnangagwa came to power through a military coup in November 2017 and promised a raft of reforms, including an end to corruption, but his critics say his administration has been the worst since independence from Britain in 1980.

There was no immediate response to our attempts to get a comment from the First Lady. This story will be updated if, and when, a response arrives.DM