Behind the cover: The entwined geniuses of Fela Kuti and Lemi Ghariokwu 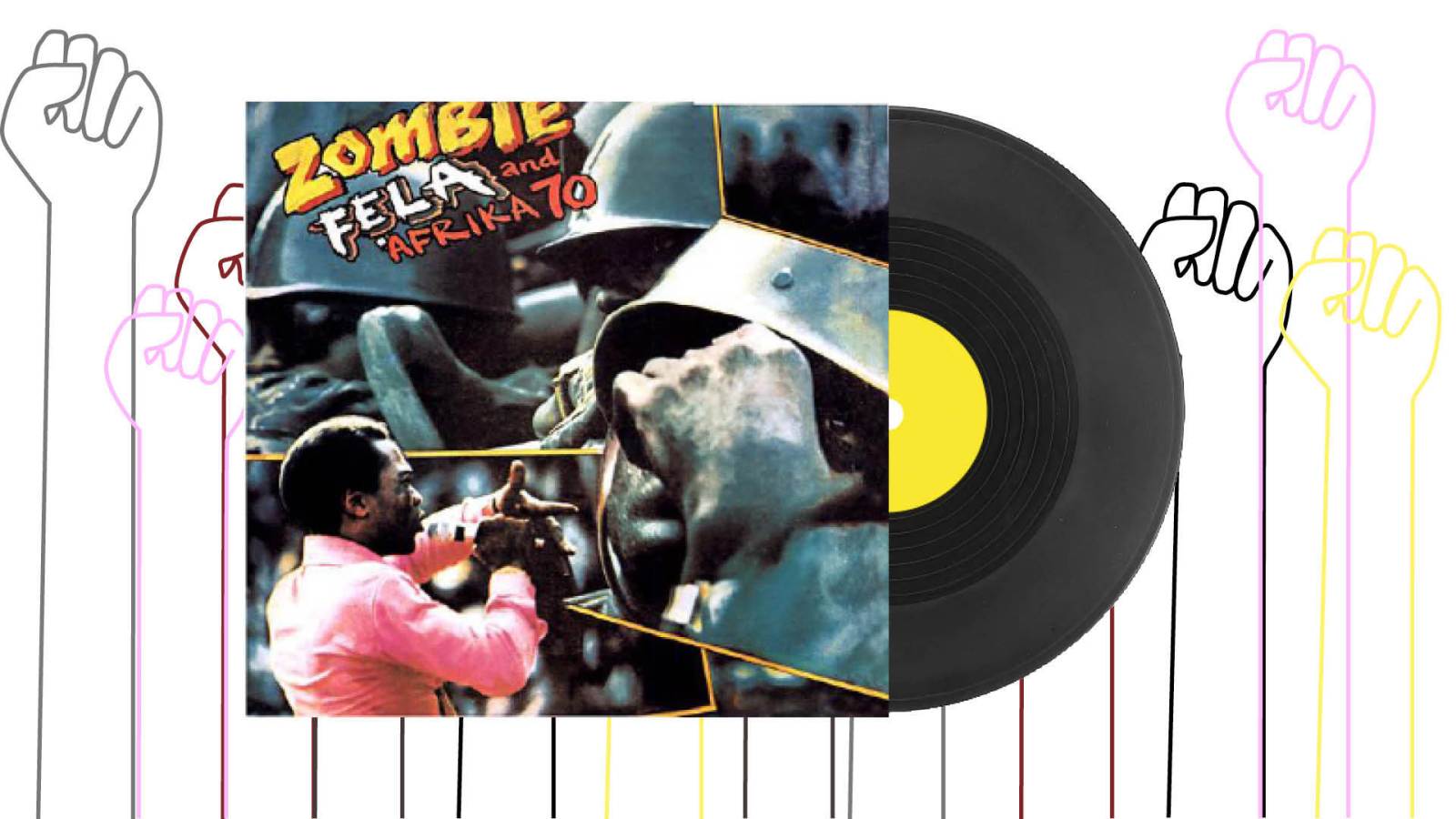 They worked together, weaving powerful art and music on 26 album covers, all of which explode with colours and striking imagery.

In the wake of the recent protests and killings that have shaken Nigeria, calling on the authorities for the ending of the Special Anti-Robbery Squad (SARS), Fela Anikulapo-Kuti’s music and his fierce politics, often targeting the government in place and rooted in his “Kalakuta Republic”, of which he was president, seem to achingly resonate with the times.

The Nigerian musician, who was to many an outspoken hero, wasn’t shy in holding the country’s government accountable, and his exuberance and insurgence manifested both through the energy of his music and the unrestrained visual art behind his album covers, 26 of which were designed by long-time collaborator Lemi Ghariokwu.

Ghariokwu gives a personal account of how his relationship with Fela started in an essay he wrote for Granta in 2013.

“In 1974, I earned Fela’s trust and friendship through my acquaintanceship with the journalist Babatunde Harrison. Fela had just experienced his first beating and incarceration by the police and this gruesome experience inspired the hit song ‘Alagbon Close’, which was the first cover I designed.”

The Alagbon Close vinyl cover is a striking illustration representing small characters – police officers – on a boat, their vessel being washed away in the ocean by what looks like a killer whale; on the upper side of the cover, an enlarged figure of Fela Kuti is looking down on them, the shackles on his wrist breaking off, a depiction of his release from jail. 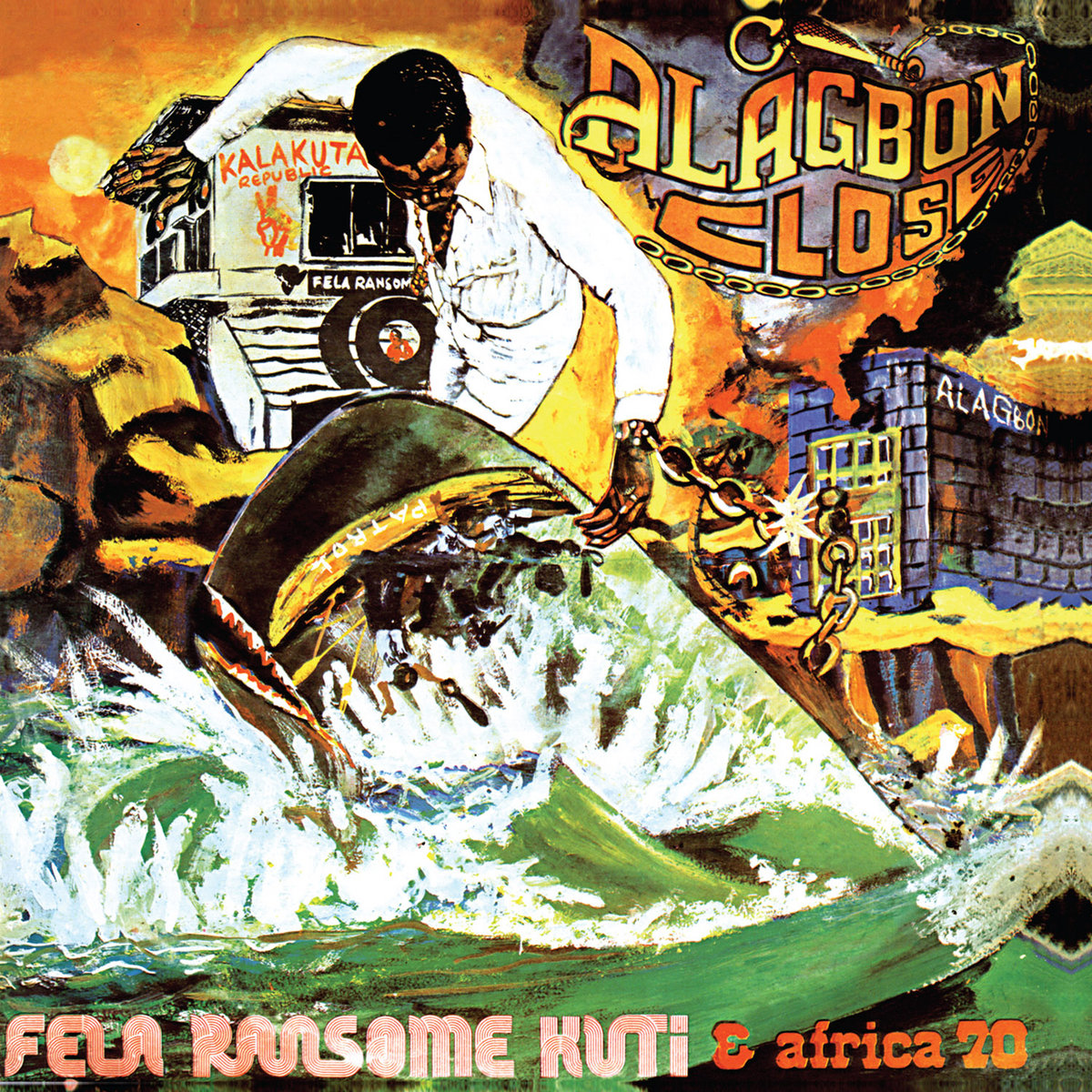 In an article for Okay Africa published in August 2017, the artist described the artwork saying, “For ‘Alagbon Close’, when I was doing the imagery, I thought that image of Fela dancing on mud would also work as him dancing on the police. For me, the album cover expresses the victory of good (Fela) over evil (the police). The whale capsizes the police boat, so nature helps Fela defeat them. On the left, Fela’s house Kalakatu Republic is standing on solid rock and the police jailhouse is on fire on the right.”

And so the musician and the artist went on to collaborate on 26 covers, with Ghariokwu creating some of the most extraordinary musical visual imagery of that era.

One of the most visually uncluttered covers, and also probably the most telling one, is the one Ghariokwu designed for Fela Kuti’s 1977 album Zombie; the album was composed in response to the musician’s compound – the Kalakuta Republic – being raided by Nigerian soldiers and the unrestrained violence by the military regime – which today seems like a particularly painful musical reference to the recent protests.

On the raid, a 1977 New York Times article by John Darnton recounts that, “Nigerian Army soldiers attacked his house, burned it, beat him and wounded scores of others, including innocent bystanders. Altogether, some 60 civilians were hospitalized, and Fela was jailed. The case became a cause, and today Fela, though free, is forbidden to perform and is considered Nigeria’s foremost dissident.”

And then, “… in reality the soldiers had come for deeper vengeance, goaded beyond endurance by the singer’s arrogance: his increasing gibes at the military, his mocking lyrics, his harem of beautiful women and the sea of clenched‐fist, black‐power salutes that surrounded. By the time the siege was over, the KalaKuta Republic was burned to the ground”.

The Zombie album and eponymous song are a powerful blend of defiance and sarcastic lyrics reminiscent of the theatre of the absurd – a mockery of the government, an open challenge towards the powers that be; the recognisable Afro-beat sound is groovy, jazzy, with a danceable pace that made the song and the album catchy and so popular.

On the cover of the album, Fela Kuti is seen with a microphone in hand, his other arm gesturing defiantly to soldiers, their figures exaggeratedly blown up, a collage of iron helmets, hidden faces, here a foot, there a hand, and Fela standing bravely in front of it all, ordering attention.

This is a parallel to Fela’s onstage daring and obstinate energy when he calls for his audience’s attention, or when, in Zombie, he shouts “ORDER!” as a way to mockingly command the soldiers, grabbing the listener’s attention. And indeed, anyone listening to the long and instrumentally rich record can easily get lost in the sounds; yet, because it is politically layered, it is impossible to ignore the insurgence, the rebellion and the power of a man dedicated to fight oppression.

In 2013, Lemi Ghariokwu wrote in Granta about the cover and the album, saying: “In 1976, the then-military government in Nigeria had instructed soldiers to horsewhip erring drivers on the highway. The soldiers carried out this order without impunity and with a fervour reminiscent of zombies.

“That was why, having been severely harassed by military personnel, Fela came up with the idea to compose ‘Zombie’. Everyone, including some military personnel from the nearby Albati Barracks, fell in love with the catchy rhythm and martial tempo, which galvanized the dancers, who wouldn’t let the song end. Fela’s saucy reprise of the Army Bugle call and horn riff got them jumping and whooping with the release of being able to mock oppressors they both feared and despised. The song became an anthem of protest for people, which was chanted under their breath anytime they felt oppressed by military personnel.”

Born Olufela Olusegun Oludotun Ransome-Kuti on 15 October 1938 in Abeokuta in Nigeria, he was arguably Nigeria’s most influential artist and his music is referenced by current Afrobeats stars like Burna Boy.

Throughout his career, with songs like Water Get No Enemy, Roforofo Fight and Shuffering and Shmiling, Fela Kuti was referred to as “… not only a musician, but a composer, and bandleader, ideological bricoleur, political gadfly, child of colonialism and father of Afro-beat (syncopated fusion of jazz, funk, and African beats); a mixture of American jazz and Yoruba folk music, a trenchant social critic among others,” as lecturer at the Department of Linguistics and Nigerian Languages at the University of Africa Toru-Orua Bayelsa State Nigeria, Thompson Olusegun Ewata explained in a 2015 study titled “Music & Social Criticism in Nigeria”.

And it is his effervescent “trenchant” personality that permeates through his music, and that defines and inspires the cover designed by the self-taught artist Ghariokwu. The artist’s colourful and vibrant work mimics struggle posters, powerful visual statements that match Kuti’s music.

In a 2018 article for art magazine It’s Nice That, writer Allyn Gaestel described Fela Kuti’s working relationship with Ghariokwu: “The musician and the painter worked closely artistically, ideologically, and in their activism – for four years in Lagos before they splintered. It was not a romantic relationship, although it had all the trying tempests, emotional investment, and eventual heartache of one.”

Theirs was indeed rolled in political debates and creativity. In fact, the artist would visit Kalakuta Republic, where he would study Buddhism and where the two would fiercely discuss “Pan-Africanism and starting the Young African Pioneers youth movement”.

But in 1977, after the release of Zombie, Stalemate and No Agreement, Ghariokwu created the cover for Sorrow Tears and Blood, which, according to the artist, “broke his relationship with Fela for eight years”.

Ghariokwu had created two covers, one a black-and-white picture of Fela Kuti, and the other a heavily political cover inspired by the Soweto uprising. Kuti rejected the second one, even though it was the young artist’s (he was only 23 at the time) favourite and, what he felt was an important statement to make.

To describe his work, Ghariokwu said, “Ideology is my base, I believe my art should serve as a tool for social re-engineering. My art is politically and socially conscious because ‘social’ and ‘political’ are elements of human society”.

That quote alone serves as a great indicator as to why Fela Kuti and Ghariokwu worked extensively together. Artistically and politically, their ideas aligned almost always. And together they created a musical and visual narrative that remains a cultural imprint of passion, defiance and hope. DM/ML