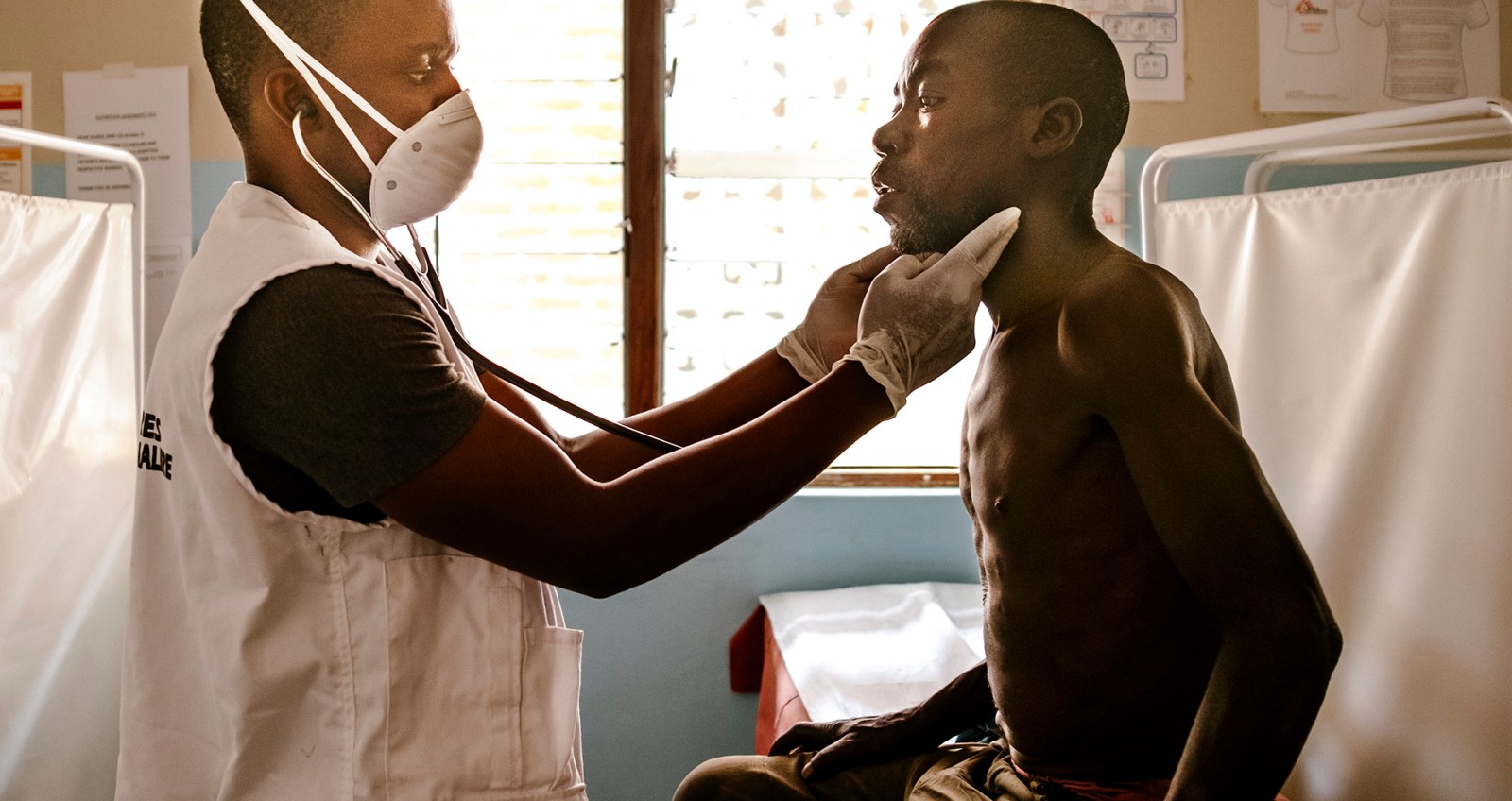 Many people still present to health services with advanced HIV disease and Aids remains a major contributor to hospitalisations and deaths in Africa, says the writer. (Photo: © Isabel Corthier)

Twenty years ago antiretroviral medicines to treat HIV were a rare luxury in South Africa. The rich could buy them for tens of thousands of rands in the private sector. Most had no access to treatment at all. At the time, president Thabo Mbeki and his infamous minister of health Manto Tshabalala-Msimang were fiercely opposed to providing antiretroviral treatment in the public sector. Those were terrible days. Many lives were lost.

Today, one of the main challenges in the fight against Aids is the lack of availability of diagnostics and drugs that can help save lives of people suffering from advanced HIV; who are very vulnerable to deadly opportunistic infections such as tuberculosis, meningitis and severe bacterial infections.

When Doctors Without Borders (MSF) started treating people with antiretrovirals in Khayelitsha on the outskirts of Cape Town, the clinics were quickly flooded with very ill people. Many were extremely weak; some had to be carried on the back of relatives or in wheelbarrows – haunting experiences.

But there was new hope.

As patients were getting better on treatment, this hope emboldened people living with HIV to demand that the government respect their right to health. After four years of struggle – led by the Treatment Action Campaign – the government begrudgingly agreed to start providing antiretroviral treatment in 2004.

Antiretroviral coverage of people with HIV in South Africa has increased from 0% in 2000 to 71% in 2019, and the South African antiretroviral programme is now the largest in the world with more than five million people on treatment, and increasing.

However, deaths have not decreased as much as it was hoped and HIV remains a leading cause of death in South Africa.

The same is true globally: Aids deaths are decreasing much slower than anticipated, despite increasing numbers of people on antiretroviral treatment.

Many people still present to health services with advanced HIV disease and Aids remains a major contributor to hospitalisations and deaths in Africa.

A recently published study estimated that 69% of people who died at Chris Hani Baragwanath Hospital between 2006 and 2009 had Aids-related conditions.

MSF-supported hospitals in South Africa, Guinea, the Democratic Republic of Congo (DRC), Malawi and the Central African Republic continue to treat large numbers of people with Aids. Because people present with very advanced HIV disease, up to one in three dies during their hospital stay.

Why has Aids not disappeared and what can be done about it?

This is necessary but it is not enough to address HIV-related mortality.

The treatment journey doesn’t stop on the day it starts; life-long treatment requires life-long support. Some people will interrupt treatment; some will struggle to take their tablets every day, thereby giving the virus the opportunity to develop drug resistance.

At the beginning of antiretroviral programmes such as the MSF Khayelitsha project, people with Aids had never accessed antiretroviral treatment (ART); they were “ART-naïve”, in scientific jargon.

Today, the majority of people with advanced HIV either are failing or have interrupted treatment. In two MSF-supported studies in the DRC and Kenya, only 20-35% of inpatients with advanced HIV were ART-naïve; over half of those on ART had treatment failure.

The reality of treatment interruption and treatment failure requires a new approach.

This is why the MSF project in Khayelitsha is piloting Welcome Back Services, focusing on the needs of patients returning to care or those failing treatment.

A welcoming, friendly staff attitude is an essential component of these services. Stigmatisation and blame of patients for interrupting or failing treatment is common and leads to delay in seeking treatment, as well as patients presenting as false-naïve (i.e. patients retesting for HIV and hiding that they were on treatment). This in turn leads to patients presenting in more advanced stages of the disease and/or inadequate treatment.

What is killing people with HIV?

Almost everyone knows that TB is the leading cause of death among people with HIV in resource-limited settings, and is estimated to be responsible for up to 50% of deaths. Less known are cryptococcal meningitis, responsible for one in five HIV deaths, and severe bacterial infections.

Together, these infectious diseases cause more than two thirds of HIV-related deaths. All three are preventable and treatable – if detected early enough.

Until recently, isoniazid taken for six to 36 months was the only widely available option for TB preventive treatment. New evidence showed that shorter regimens of rifapentine and isoniazid, weekly for three months or daily for one month, were equally effective at preventing TB – opening up new prospects of decreasing TB-related deaths.

Cotrimoxazole prophylaxis, given daily, protects against many of the most dangerous bacterial infections. Daily fluconazole can prevent cryptococcal meningitis and is recommended in some countries as primary prophylaxis, and everywhere as secondary prophylaxis, to prevent recurrent disease.

However, it is missing in many – if not most – clinics in Africa.

To prevent death from advanced HIV, it is necessary to detect it earlier, at the primary care level – before patients develop disease so severe that they seek hospital admission.

This is where CD4 count testing comes in.

Advanced HIV disease is defined by the World Health Organisation as having a CD4 count lower than 200 and/or having clinical stage 3 or 4 defining illnesses.

No time to lose

The longer the delay to diagnosis and treatment, the lower the chances of survival.  This is where rapid tests are life-saving.

The CD4-CrAg-LAM triad is the basic diagnostic component of the Advanced HIV Package of Care. A CD4 count below 200 leads to systematic TB LAM and CrAg tests, regardless of symptoms. When infection with TB or cryptococcus is diagnosed at an early stage, before symptoms develop, they are easier to cure.

To make a difference, a positive diagnosis needs to lead to rapid initiation of effective treatment.

While TB (and even drug-resistant TB) treatment is readily available in most settings, this is not the case for flucytosine, amphotericin B and fluconazole – key drugs for the treatment and prevention of cryptococcal meningitis.

When left untreated, the odds of surviving cryptococcal meningitis are zero.

Treatment with flucytosine and amphotericin B reduces mortality by 40% compared to fluconazole alone. Yet, in Africa, less than one in 150 patients in need had access to this drug in 2020, which still isn’t registered in most African countries.

Severe bacterial infections are treated with antibiotics. Recent data in the Centre Hospitalier de Kabinda, an MSF hospital for people with advanced HIV in the DRC, showed very high rates of resistance to the most commonly used antibiotics.

While there is some – albeit insufficient – progress on TB, cryptococcal meningitis and severe bacterial infections are so neglected that there isn’t even a clear strategy outlining the steps necessary to control these diseases and the deaths they cause.

What we need urgently to save lives is a rapid availability of a package of care for the prevention, diagnosis and treatment of advanced HIV at the primary care and hospital level, along with strategies with clear targets to decrease Aids mortality.

Without it, scenes reminding us of those days in Khayelitsha two decades ago will continue to haunt us. DM/MC