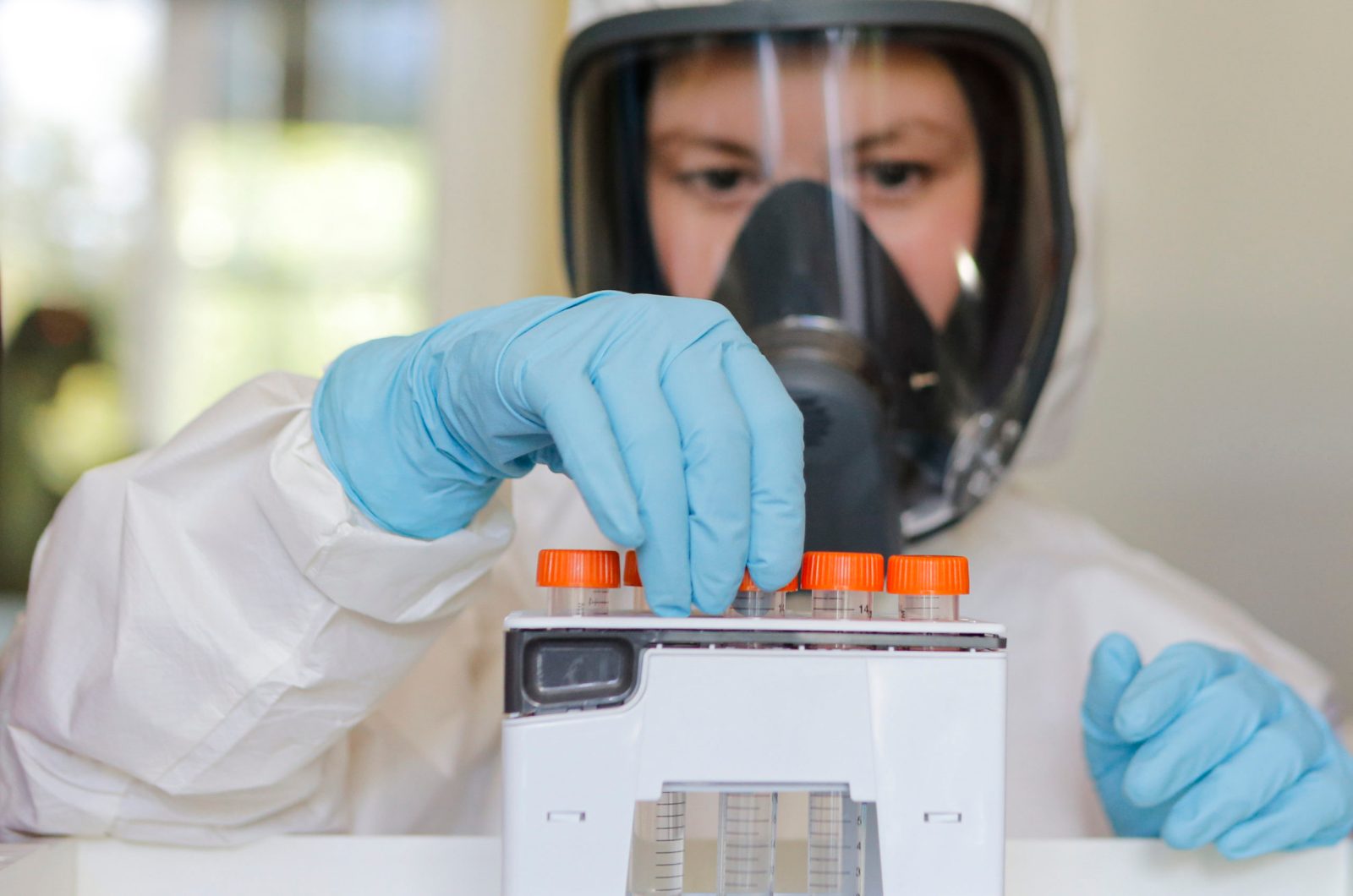 A photo made available by the Russian Direct Investment Fund shows a scientist at Nikolai Gamaleya National Center of Epidemiology and Microbiology working on the production of a two-vector Covid-19 vaccine in Moscow. (Photo: EPA-EFE / RDIF Handout)

The world is hurtling towards a Covid-19 vaccine with much talk about the safeguarding of universal human rights and transparency, but very little tangible progress to show for it, according to detailed research by Human Rights Watch. On Thursday, it released a report on the search for a Covid-19 vaccine. Its solutions include an urgent call for universal support for proposals by South Africa and India to scrap some aspects of international patent laws for Covid-19 vaccines.

It has been repeated since the onset of the Covid-19 pandemic – universal and equitable access to a safe and effective Covid-19 vaccine is the only way to truly overcome the pandemic and return to “normal” life. Yet, the current approach is leading the world far off this path, according to a report released by Human Rights Watch on Thursday 29 October 2020 titled “Whoever Finds the Vaccine Must Share It”: Strengthening Human Rights and Transparency Around Covid-19 Vaccines.

The new report covers the period between 23 April 2020 and 13 October 2020 to provide an up-to-date and extensively researched overview of the world’s disjointed scramble for a Covid-19 vaccine.

The report details how a call for a “people’s vaccine” has remained mere rhetoric as “vaccine nationalism” has instead turned into a very real strategy for many governments. In May 2020, 140 governments and experts signed an open letter agreeing that all Covid-19 medicines – including a vaccine – should be treated as “public goods” and called for a “people’s vaccine”. Six months later, Covid-19 vaccines have been carved up among a handful of rich countries as they spend millions in public money to pre-book numerous potential vaccines. Nevertheless, the report argues it is not too late to change course to one centred on protecting the human rights to life, health and an adequate standard of living.

The world’s path of action is littered with barriers to access which impinge on human rights. One is the use of public money with a “near total lack of transparency”, according to the report. There is little information available on the terms and conditions of this funding, what has been pre-booked for whom, how it will be manufactured, who will receive the vaccine first and when. Already governments had spent $19-billion by mid-September 2020.

The report details how the world’s most promising Covid-19 vaccines have already been carved up between rich countries many months before they are approved. They have signed deals behind closed doors to reserve doses for their exclusive use. They have done this with several vaccines, resulting in hoarding across the board and leaving very little for the rest of the world “to pick through”, says the report.

The countries that have already spent the most are the US, Germany, the UK, Norway, South Korea, Saudi Arabia, Canada and Spain according to Policy Cures Research.

There were nine vaccine candidates in the final phase of clinical trials by September 2020. Rich countries such as Australia, Hong Kong, Israel, Japan, Switzerland, the UK, the US and the EU have already pre-ordered 51% of five of these potential vaccines. Combined, their populations represent just 13% of the world’s people.

This leaves 87% of the world’s people out in the cold. Low- and middle-income countries do not have the option to buy into risky advance deals and don’t necessarily have the manufacturing capacity to produce their own doses.

The interactive map, VaxMap, visually represents efforts around the world to develop Covid-19 vaccines. It includes where manufacturing capacity exists and the locations of the companies with vaccine candidates.

The international web of intellectual property permission laws is another barrier to access. As it stands, the private companies that find a working vaccine will not be able to supply the entire world and might not be willing to share their know-how. This will make it near-impossible for others to manufacture it on a large scale to get the vaccine to all countries quickly and at an affordable price.

To counter this “vaccine nationalism”, a handful of global cooperation initiatives have been established to either pool money or know-how to speed up the process of rolling out a vaccine and other medical supplies equally and affordably. Nevertheless, they come with their own snags. The Covid-19 Technology Access Pool has been endorsed by only 40 governments. Its COVAX vaccine pillar has been widely endorsed, but because of limited transparency, it is difficult to ascertain how effective it might be.

South Africa is classed as a middle-income country and has opted to enter into COVAX as well as negotiating deals directly with pharmaceutical companies. The number of doses the country gets depends on how much it can pay. And then there is the question of who gets a vaccine, and when.

The global approach will clearly exacerbate the inequalities the pandemic has already deepened, argues Human Rights Watch. Across the globe, there have been massive job losses, disruptions in education, increased domestic violence, reduced access to basic health services and millions more have been pushed into extreme poverty. It has impacted on everyone – yet not everyone will have a fair chance to receive a vaccine and have their human rights protected.

The approach will result in rich countries getting any vaccine first in limited supply. The roll-out to low- and middle-income countries will be delayed, and, in the meantime, their public health and economies will be damaged further. The Covid-19 virus knows no borders, so if a portion of the world’s population is unprotected, then everyone remains vulnerable to the pandemic’s havoc.

The report argues that governments have an obligation to protect human rights in the search for a Covid-19 vaccine because they are bound by their local laws or international agreements they have signed.

Most recently, all 196 member states of the World Health Organisation adopted a resolution agreeing to the call for “universal, timely and equitable access to, and fair distribution of, all quality, safe, efficacious and affordable essential health technologies and products, including their components and precursors, that are required in the response to the Covid-19 pandemic as a global priority” – including vaccines.

Only in overcoming divides and vaccine nationalism in a way that respects the human rights of all people in all countries can the world recover from the pandemic once and for all, argues the report. By sharing, the mass roll-out of a vaccine could be cut by years, says the report.

But it’s not over until it’s over. The report urges governments to use their sway to require vaccine developers and manufacturers to share knowledge and technology by joining initiatives such as COVAX. It called for the collective mapping of the world’s capacity to manufacture the vaccines and work together to expand it. In addition, they should not sign deals that undermine equitable global access. There should be laws to cap the prices of the vaccines.

Human Rights Watch supports South Africa’s and India’s calls for parts of international intellectual property law to be waived for Covid-19 vaccines. This will mean the “recipe” for a vaccine is freely available and can be made the world over. In addition, they should compel companies to be transparent about the pricing of vaccines.

Governments funding research and development should create a public database of all contracts signed and develop a way of constantly consulting civil society about human rights issues. MC/DM