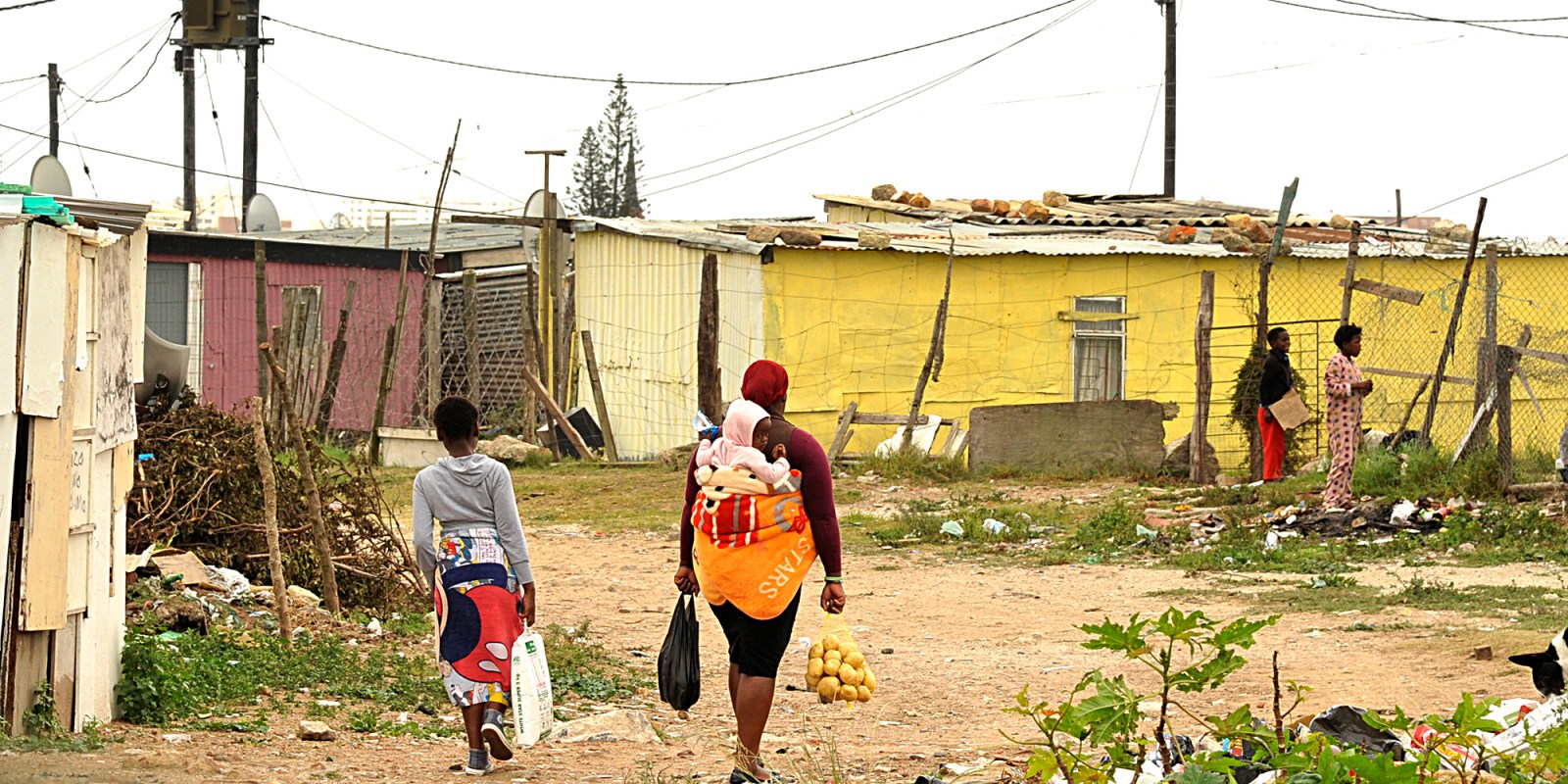 A mother and her children return home in Walmer Township in Port Elizabeth after shopping on grant day. (Photo: Mike Holmes)

The Black Sash Trust is going to court on Friday to prevent the South African Social Security Agency from cancelling the R500 top-up grant for caregivers during lockdown. The trust says while it tried to seek clarity on the extension of the grant, it was ignored, and learnt via social media that the grant would be cancelled.

Arguing that the R500 caregiver grant is a vital measure to assist the most vulnerable of people in South Africa during an “unprecedented time of distress” with food and shelter, the Black Sash Trust will ask the North Gauteng High Court on Friday 30 October to interdict the South African Social Security Agency (Sassa) from cancelling the grant.

Sassa announced this week on social media that the R500 top-up grant for caregivers and all other top-up grants “have come to an end” and that November’s grants will revert to pre-Covid figures.

“We argue that the caregiver grant is a vital measure needed to assist the most vulnerable people in our country through an unprecedented period of distress to access basic needs like food and shelter. In fact, the additional amount is closely linked to the current state of disaster and cannot come to an end until the disaster itself does…

“We believe the government is fully aware that these difficulties have not come to an end, given that payment of the special R350 Covid-19 Social Relief of Distress Grant has been extended. As we understand it, this top-up is a new form of social security that cannot come to an end until the state of disaster is lifted or the devastating impacts of the pandemic have been reversed. This date is certainly not Saturday, 31 October 2020,” Ariella Scher, an attorney at the Centre for Applied Legal Studies who is representing Black Sash, said.

Sassa and the minister of finance will oppose the application.

The national director of the Black Sash Trust, Lynette Maart, said the cancellation of the grant will affect more than seven million beneficiaries.

“[They] will be denied relief from the social and economic hardship and suffering brought on by the pandemic – all while the state of disaster remains firmly in place,” Maart added.

In the affidavit filed before the court, Maart said the decision by Sassa to cancel the top-up grant was irrational and invalid “owing to the fact that the country is still engulfed by the pandemic and the state of disaster has been extended to 15 November 2020”.

“To state it plainly, caregivers do not qualify for social assistance independently under the Social Assistance Act. They access a child support grant meant for children with whose upbringing they are legally charged. The Social Relief of Distress Grant [also known as the Covid-19 grant] applies to a category of beneficiaries for whom no social assistance exists under the Social Assistance Act. Yet, the one grant has been continued through presidential prerogative power and the other cancelled. What is more, the terminating entity, Sassa, has no legislative authority to terminate the grant, and in doing so is contravening the minister’s decision, as reflected in the May 2020 directions that the caregivers’ grant be paid indefinitely,” she stated.

Maart further points out in her affidavit that the vast majority of beneficiaries of this grant are black women from impoverished communities.

Black Sash’s legal team is expected to argue that Sassa has no authority to stop the grant; the decision to stop the caregivers’ grant is unlawful and should be set aside because it contravenes the directives creating the grant.

“In short, there is no rational reason for the termination of the top-up grant to precede either the end of the state of disaster or alternatively, abruptly stop when the deleterious impact of the state of disaster on the most vulnerable – women and children – continues to wreak havoc on basic social security, such as access to food, childcare and shelter, among others,” she added.

“With respect, I ask that this court take judicial notice of the fact that since the aim of the grant has been to address the impact of Covid-19, the distribution of these funds has achieved its desired impact. To terminate the caregivers’ grant now, whilst as a nation we are still in the eye of the Covid-19 storm is to deprive caregivers of the very protections that the social development directions seeks to accord them, ie financial reprieve and some form of income stability whilst they cannot with certainty rely on their own resources to do so. To stop the caregiver grant before the state of disaster ends will result in unimaginable hardship and all of this in circumstances where no explanation at all has been given for its termination,” Maart stated in her affidavit.

Black Sash’s legal team is expected to argue that Sassa has no authority to stop the grant; the decision to stop the caregivers’ grant is unlawful and should be set aside because it contravenes the directives creating the grant.

A spokesperson for Sassa, Omphemetse Molopyane, confirmed that they would oppose the application.

Ihsaan Bassier from the C-19 Coalition’s Cash Transfers Working Group said the implied withdrawal of the caregiver grant after October 2020 displays contempt for women and children.

“We are also dismayed at the persistence of the insufficient grant amount, the period of extension and the dismal implementation of the social relief of distress grant [R350].”

In a previous statement signed by over 160 civil society organisations, they called for the extension of the R350 grant and caregiver grants for five months until the end of the financial year, but also increasing both grant amounts to the food poverty line of R585 a month.

Bassier said the caregiver grant is overwhelmingly received by women and withdrawing it will hurt 30 million people.