Despite spectre of debt spiral, Mboweni delivers a dete... 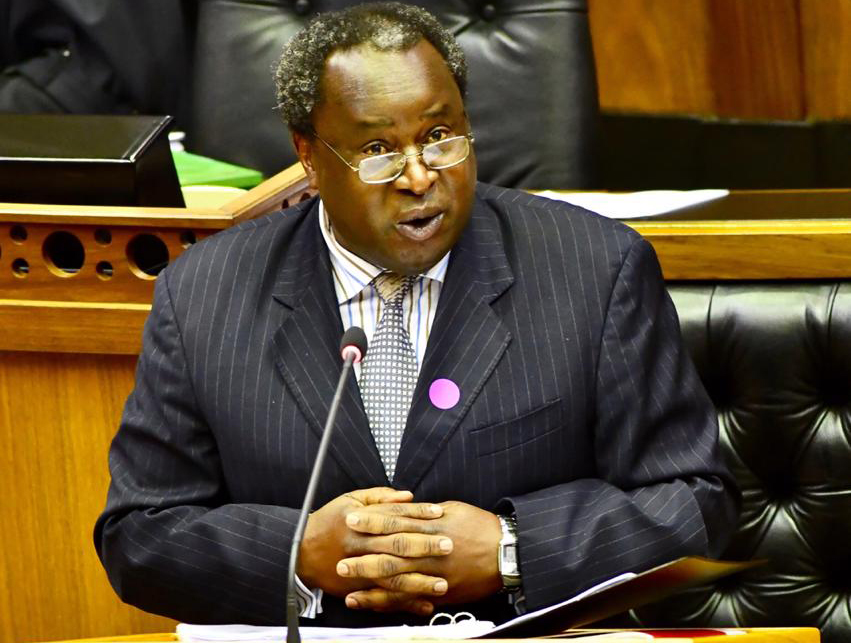 Finance Minister Tito Mboweni talked up hope, despite his grim Medium-Term Budget Policy Statement. Invoking 1994, when ‘freedom was two weeks old’ and Madiba stood in the House, Mboweni said: ‘As we rose to that fiscal challenge then, so we will rise to this one.’

A hardy aloe stood at the speaker’s podium of the National Assembly when Finance Minister Tito Mboweni delivered the 2020 Medium-Term Budget Policy Statement (MTBPS) on Wednesday.

“Our aloe ferox is recovering,” said Mboweni. “You are now well aware that the country’s aloe ferox is drought resistant; it can survive the harshest of circumstances and can certainly withstand a pandemic.”

And that recovery plan was the economic reconstruction and economic recovery programme President Cyril Ramaphosa launched at a joint parliamentary sitting just short of two weeks ago.

It was that plan to which Mboweni anchored his MTBPS speech in Parliament. Ramaphosa attended through a virtual link since he is in quarantine after attending a dinner where a guest had tested positive for Covid-19.

“Mr President, by putting all our efforts into implementing the Economic Reconstruction and Recovery Plan, we can accelerate growth to 3% or more. This will secure fiscal sustainability and build this economy better than before,” said Mboweni, adding later:

“Mr President, our government, under your wise leadership, has championed the Infrastructure Fund to implementation. And we are starting to see results.”

And with infrastructure central to this plan, the finance minister announced social housing subsidies of R2.2-billion, with another R6.7-billion contractually committed to this programme, escalating to R20-billion over the next 10 years.

Other infrastructure development included hospital projects in KwaZulu-Natal and the Western Cape, alongside what Mboweni called “exciting new proposals” to develop more than 12 harbours in the Eastern Cape, KwaZulu-Natal, Northern Cape and Western Cape.

Highlighted was R1-billion for food relief, alongside R12.6-billion before March 2021 to presidential employment schemes, with R2-billion allocated to Working for Fire, Working for Water and Working for Forests employment programmes.

It was halfway through the 20-page speech that things got a bit more real.

The R10.5-billion SAA bailout was finally mentioned; businesslike and without much ado. “You can’t run away from your obligations,” was Mboweni’s response to heckling from the opposition benches. The ministerial spin was that this was a business rescue, not a bailout.

“Our approach is in line with the principle that funding to state-owned companies must come from within the current framework and reprioritised from elsewhere. We cannot break the fiscal framework.”

It was effectively an admission that departments and entities had to cut spending to make money available for the national airliner. Mboweni went on to caution about debt, saying the MTBPS indicated it would hit 95.3% of GDP by 2025.

“We are far poorer than we thought,” admitted Mboweni, explaining why borrowing to get out of the fiscal squeeze was no longer possible.

“Right now, government is borrowing at a rate of R2.1-billion per day. This cannot continue. We must be careful to avoid the fate of Argentina and Ecuador that have defaulted on their debts this year.”

And then it was on to the politically tricky public wage bill that needed what Mboweni called a strategic conversation in these post-pandemic recoveries.

“We need to come together to forge a new consensus on public sector employee compensation. Our compatriots in the private sector have made sacrifices and even negotiated salary cuts to keep businesses afloat.”

He went to pay tribute to South Africa’s 1.3-million civil servants: “They are patriots.” Mboweni called for a discussion on wholesale pay cuts across the state and its entities, as well as public representatives.

There was lukewarm applause in the House.

Unlike previous years, the speech was not available under embargo ahead of time. It’s the first time in at least two decades. And it remains to be seen whether that was because of last minute disputes, or whether the result of wide-ranging consultations.

“Today we embrace our higher purpose as citizens and leaders to take forward the vision of nation-building. Together we can shape a new destiny for our great, vibrant, beautiful country,” concluded Mboweni.

“The green shoots are beginning to show.” DM