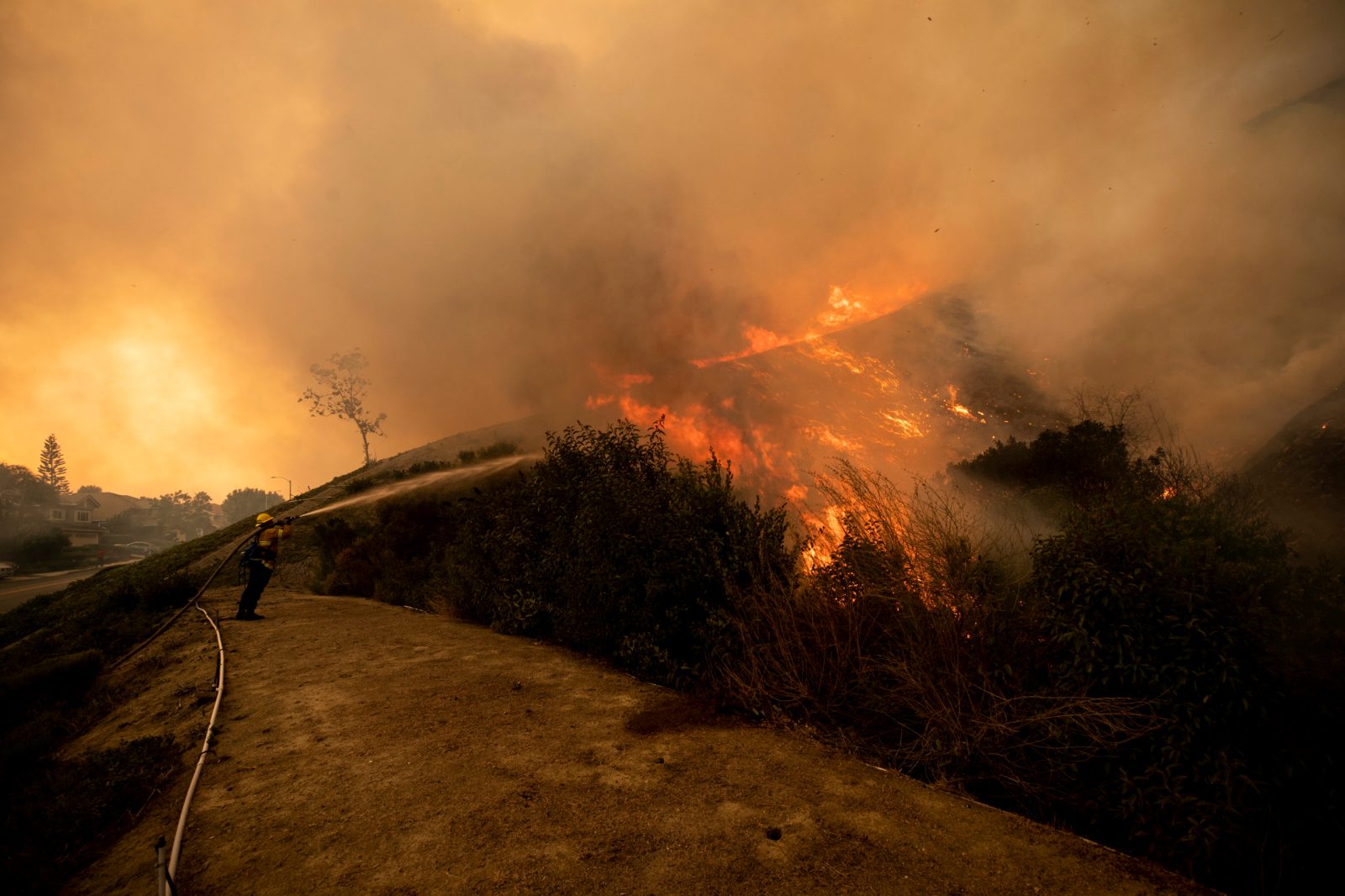 The latest threats came amid what meteorologists called the strongest onslaught of extreme winds – and lowest humidity levels – yet documented during an already epic California wildfire season ranked as the worst on record in terms of acreage burned.

Fires have scorched more than 6,400 square miles (16,500 square kilometres) – equivalent to the land mass of the state of Hawaii – since the start of the year, with thousands of homes destroyed and 31 lives lost.

Red flag warnings for incendiary weather conditions remained in place across much of California due to winds gusting in excess of 80 miles per hour (129 kph), according to the California Department of Forestry and Fire Protection.

Utility company Southern California Edison said its equipment is under investigation as a possible source of the blaze.

Some 90,800 residents were ordered evacuated from homes in and around the city of Irvine as the fire raged largely unchecked through drought-parched brush in the canyons and foothills of the Santa Ana Mountains south of Los Angeles, officials said.

No property losses were immediately reported. But two firefighters among some 500 personnel battling the flames with bulldozers and hand tools were hospitalized with severe burns, authorities said.

An estimated 1,170 homes were under evacuation orders from that blaze, the county fire authority said on Twitter late on Monday.

Southern California Edison reported shutting off electricity to 21,000 homes and businesses as a precautionary measure in the face of elevated fire risks posed by dangerous winds.

Hundreds of miles away, the Pacific Gas and Electric Company (PG&E) said it had cut off power to more than 350,000 of its customers for the same reason.

Wind-damaged electrical lines have been implicated in causing dozens of devastating California wildfires in recent years, and utilities have increasingly resorted to such “public safety power shutoffs” to reduce the risk.

Wind gusts were clocked at up to 89 mph in Sonoma County wine country north of San Francisco Bay, and were steadily blowing at more than 50 mph elsewhere through the region.

By midday Monday, PG&E said it was beginning to restore services to some customers “where it is safe to do so,” with most of the shutoffs expected to be ended by Tuesday night as winds abated.

The latest outbreak of fires cap a summer of record California wildfire activity stoked by increasingly frequent and prolonged bouts of extreme heat, drought, wind and dry lightning storms that scientists point to as a consequence of climate change.

Further east in drought-stricken Colorado, an Arctic storm sweeping the Rockies over the weekend dumped 6-16 inches (15-40cm) of snow on the two largest wildfires in that state’s history.

“The snow has improved our chances of getting them contained, but we’re still a way off,” said Larry Helmerick, spokesman for the Rocky Mountain Area Coordination Center.

The two blazes combined have so far blackened well over a quarter-million acres. (Reporting by Mimi Dwyer and Steve Gorman in Los Angeles; Additional reporting by Keith Coffman in Denver and Kanishka in Bengaluru; Editing by Sandra Maler, Bill Tarrant and Lincoln Feast.)