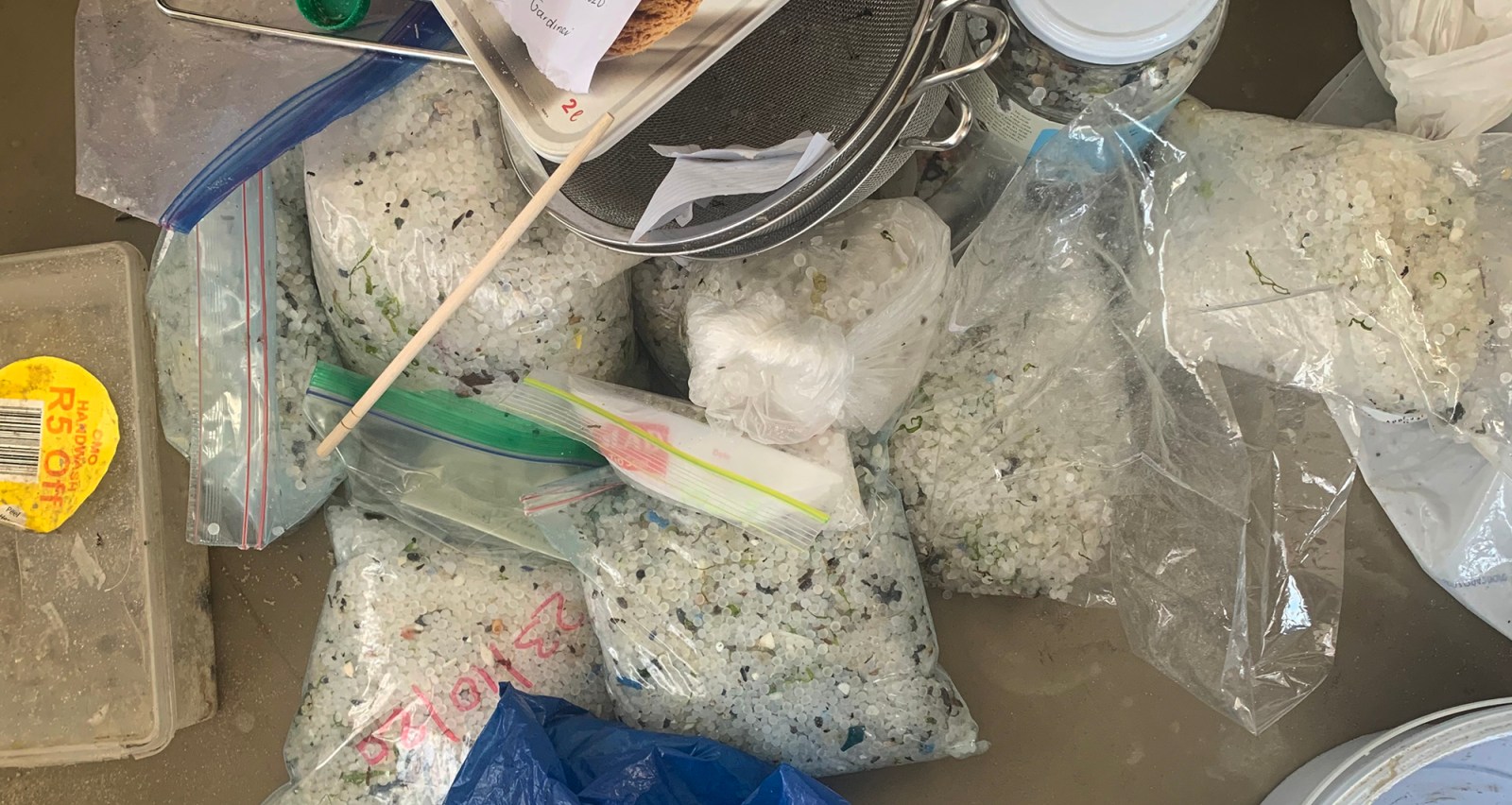 Nurdles need to be removed from the beach because fish and turtles mistake them for food. (Photo: Karabo Mafolo)

Over the past week, nurdles, the raw material used to make plastic, have been spotted along beaches from Port Elizabeth to Cape Town. While it is not yet confirmed how they got there, NGOs and the City of Cape Town have urged beachgoers to help clean up the mess.

On Monday afternoon, under a warm Cape Town sun, families flocked to Muizenberg beach. While children played in the sand and swam in the ocean, some people picked up nurdles that had been washed up on the beach.

Nurdles are the raw material used by manufacturers to make plastic. Last Wednesday 21 October, Shark Spotters received reports that nurdles had been sighted on beaches along the southern coast.

Shark Spotters has asked people to help pick up the nurdles. CEO Sarah Waries described the recent spillage as “an environmental disaster”.

Stephen Ulyate, a beachgoer who picked up nurdles at Muizenberg, said he’d picked up about “2,000 nurdles over a small stretch of the beach”.

Nurdles weigh about 20mg and those that haven’t been in the ocean for long are white.

The last time South Africa had a massive nurdle spill was in 2017, when a container ship was lost during a storm in Durban. The ship was carrying 49 tons of nurdles. To date, about 10% has been cleaned up.

According to spokesperson Monique Holtzhausen, Plastics SA, with the Department of Environmental Affairs, is investigating the possibility that a vessel losing cargo off Plettenberg Bay was responsible for the nurdle spill.

Peter Ryan from UCT’s Marine Research Institute, who studies the impact of ingested plastic on seabirds, said nurdle spills “are a lot less than what they used to be”.

“Historically, people used to not manage [nurdle spills] well. When I first started working on plastics in seabirds back in the 1980s, most of what we actually found in seabirds and turtles were nurdles, and it wasn’t fragments of manufactured things. But over time we’ve filled up the ocean with more bits of manufactured junk and we’ve reduced the number of nurdles escaping into the sea,” said Ryan.

“For some birds, if they can excrete them straight away, there’s not much of an impact. [The nurdles we’re seeing] don’t have any toxins attached to them yet, they look like nice new nurdles. If they drift around at sea for a long time, then they slowly start to pick up toxins from the environment,” Ryan told Daily Maverick.

The issue with eating nurdles is that some animals can’t excrete them, such as some storm petrels, said Ryan. “The storm petrels have quite a tight angle where the intestine leaves the stomach and that centre seems to prevent larger plastic things from coming through into the intestine and so you can start to build up plastic in the stomach.

“The biggest concern around that is the fact that the birds can’t eat as much because half of the stomach volume is taken up by plastic… a lot of these birds are quite opportunistic foragers so when they find some food, they want to maximise that opportunity,” said Ryan.

Ryan said that “in the past, people would be a bit sloppy and they’d spill some nurdles and rather than sweep it up, they would just hose it down the storm drain and it would go down into the sea; and that’s why 30 years ago there were lot of nurdles around, people didn’t care”.

Now, companies are making an effort to prevent spills. In 2017 Plastics SA introduced Operation Clean Sweep (OCS). According to the Plastics SA website OCS is “an international stewardship programme designed to prevent resin pellet, flake, and powder loss and help keep this material out of the marine environment”.

Plastics SA has also developed a detailed toolkit and a manual that contains guidelines to help plastics industry operations managers reduce the accidental loss of pellets, flakes and powder from the manufacturing facility into the environment, said Holtzhausen.

After the 2017 nurdle spill, Saudi Basic Industries Corporation (Sabic), the company which had lost its container, paid for the clean-up operations.

While it is still unclear who dropped the latest batch of nurdles into the ocean, Marian Nieuwoudt, City of Cape Town Mayoral Committee Member for Spatial Planning and Environment, has urged people to help clean up.

“Once collected, the nurdles will be taken to a plant in Blackheath where they will be transformed into building materials, ensuring that they enter the plastic production and recycling chain instead of going straight to landfill,” said Nieuwoudt.

“I do think that the company that’s responsible for this needs to be held accountable,” said Beach Co-op’s Omardien. DM

The nurdles can be dropped off at: