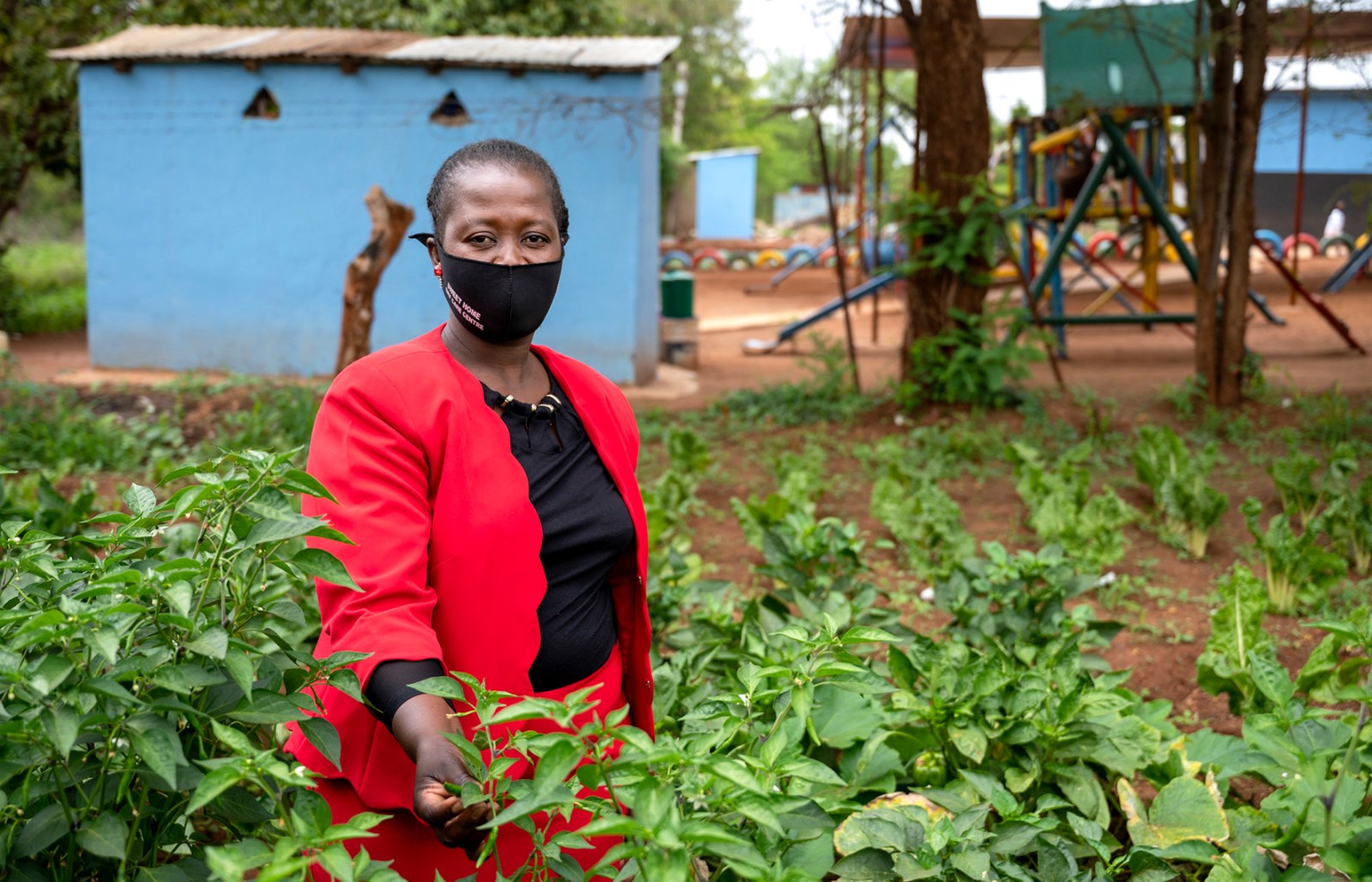 Khomi Constance Maluleke in the vegetable garden that provides much of the nutrition for children at Sweet Home Daycare Centre in Xigalo, Limpopo. (Photo: Chris Collingridge)

Shoprite has been working with more than 300 community projects to mitigate hunger through food gardens and provide early childhood development services to poor communities. Maverick Citizen interviewed five of the women leading these projects and will run their stories over the next week.

Founder of Sweet Home Daycare Centre, Khomi Maluleke arrives for our interview, impeccably dressed in a bright red suit. Her office cabinet bursts with trophies and her wall is filled with certificates of achievement and Early Childhood Development compliance.

Maluleke started her daycare in the village of Xigalo just outside Malamulele in Limpopo in 1998 with little more than a blanket and a few food staples from her kitchen. At the time there were just six children in the daycare. Fees were R50 a month per child.

Maluleke says she wanted to help families in her village because many of the mothers were teenagers, still trying to finish school. The children’s fathers were largely uninvolved in their lives, leaving the grandparents in charge.

But the children were often left unattended and uncared for, which motivated her to start a daycare centre.

She asked the village headman and chief for permission to convert an abandoned clinic into a crèche, then called a community meeting announcing her plans to start the daycare centre. At first, there was little buy-in because of the high unemployment rates in the village, so only six children were signed up. By the end of the year, however, there were 15 children as parents started seeing the benefits of daycare.

Instead of paying fees, some would barter with her by offering to chop wood or fix things in lieu of payment.

Maluleke gets tearful as she recalls how difficult it was in the early days because she had no real income and the converted clinic was dilapidated and ill-suited. What kept her going was her love and concern for the children so she tried to raise funds to make ends meet.

When she approached the Department of Social Development for funding, she was told she did not qualify as the building failed to meet the required minimum standards for an ECD centre.

In 2010, things finally turned around after the parent of a former pupil contacted Shoprite on her behalf, asking for a donation. The retailer responded positively by donating playground equipment, mattresses for the children as well as some furniture.

By 2012, the daycare had 50 pupils and while they were receiving fees, this still wasn’t enough. Maluleke applied once again for assistance from  Shoprite, which partnered this time with the Centre for Early Childhood Development. This helped with renovations, which included a new kitchen, two extra classrooms and another play area. Maluleke and her staff also went for ECD training.

The staff of Sweet Home Daycare were trained in growing a food garden to provide nutritious food for the children.

The daycare has now grown to 127 children, seven teachers, two cooks and a gardener. Maluleke is studying towards her diploma in educare.

Children aged between nine months and four years are exposed to an ECD programme that includes music, sport and cultural activities.

Despite the cheerful grounds of the daycare, with its brightly coloured buildings and abundant produce, one is struck by the reminder that water and sanitation infrastructure is still scarce in Limpopo and the playground is blighted by the presence of old pit toilets for staff and pupils.

Maluleke is proud of her growing daycare though, but there’s work to be done: “We need to finish building the dining hall,” she says. Once the ceiling’s in, her pupils will finally have a place to eat, away from the classroom. DM/MC

This article is part of a series of articles spotlighting women making meaningful contributions in their communities being featured by Maverick Citizen over the week, you can read the first article here.