Five murder suspects appear in court for murder of Senz... 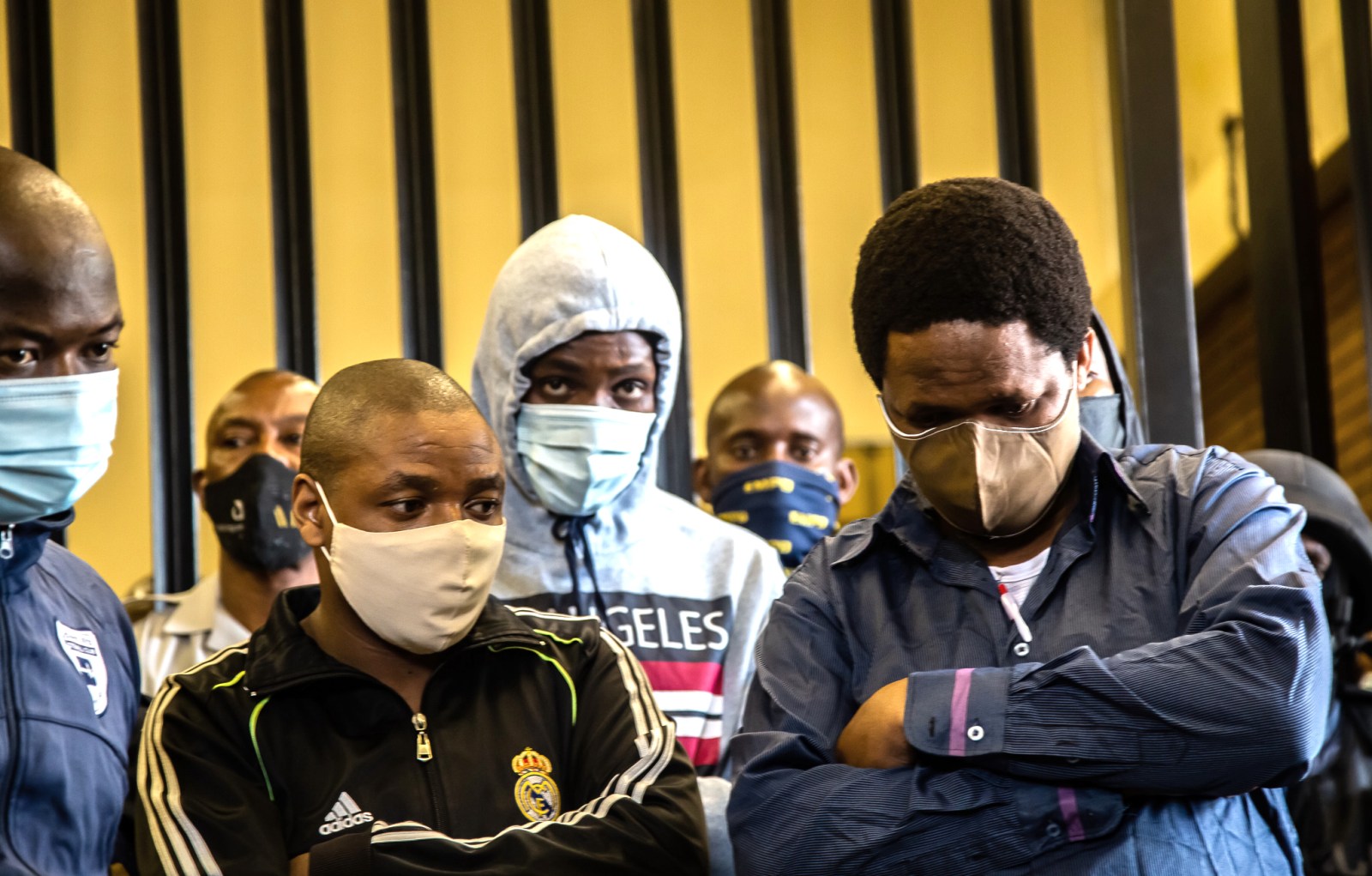 Five suspects in the Senzo Meyiwa murder case appear at Boksburg Magistrate’s Court on October 27, 2020 in Boksburg, South Africa. According to media reports, the suspects were arrested on the sixth anniversary of Meyiwa’s death in KwaZulu-Natal and Gauteng. (Photo by Gallo Images/OJ Koloti)

After a breakthrough announcement on Monday, the five suspects who have been accused of murdering football star Senzo Meyiwa six years ago appeared in the Boksburg Magistrates' Court on Tuesday.

Four of the five men charged with the murder of Orlando Pirates and Bafana Bafana goalkeeper Senzo Meyiwa refused to enter the dock when they appeared in the Boksburg Magistrate Court on Tuesday morning.

One of the accused,  Mthobisi Prince Mncube, said he would not enter the dock because he did not kill Meyiwa. Mncube said that he was arrested while in custody as he and some of his co-accused were serving other jail sentences.

The five accused were arraigned on several charges including murder, attempted murder and robbery with aggravating circumstances. They were also charged with contravention of Section 3 Act 60 of 2000 in relation to the possession of a firearm.

Meyiwa was gunned down on 26 October 2014 at Kelly Khumalo’s mother’s house in Vosloorus.

The state alleges that on the evening of 26 October 2014, Meyiwa had visited Khumalo, his girlfriend, in Vosloorus. The state further alleges that there were several other people in the house, and listed Khumalo’s mother Gladness Khumalo, Khumalo’s sister Zandile Lorraine Khumalo, Longwe Twala, Tumelo Madlala (listed as Meyiwa’s friend) and Mthokozisi Twala as some of the occupants. According to the state, the occupants of the Khumalo house were in the lounge.

“At about 8pm two persons burst into the house armed with a firearm and a knife, entered the house and demanded money and cellphones. A scuffle ensued between Mr Senzo Meyiwa and the person armed with a firearm, who was dreadlocked, had a gold slit on one of the teeth and was wearing a Khakhi-coloured jacket,” according to the state.

Four of the accused had a brief dialogue with the magistrate as drama ensued after they refused to step into the dock, pleading innocence.

The only accused with a legal representative was Ntanzi.

The charge sheet states that a post-mortem was conducted on 28 October 2014 by Dr Johannes Steenkamp, and the cause of death was given as “consistent with bullet wound of the chest involving the heart and lung”.

A spent bullet fragment and 9mm calibre bullet were subsequently found in the house. The state said it will allege that the accused were acting in the furtherance of a common purpose.

The six-year-old case has been beset by speculative details on social media about what could have transpired on the day of Meyiwa’s killing. Twala’s father and renowned music producer Chicco Twala blamed the tweets as spreading false information. Family, friends and many South Africans have expressed frustration with the police’s handling of the case as it drags on. There have also been claims of a cover-up.

Critics of the police say that had it not been for the pressure that was put on them by AfriForum, the case docket would still be gathering dust.

On Monday, police announced a major breakthrough in the case with the arrest of the five suspects in Gauteng and KwaZulu-Natal. The police said they believed they have a watertight case against the accused. They said forensic evidence tied the accused to the scene of the crime and that ballistic evidence also connected the accused.

At a media briefing on Monday, Nel reiterated police minister Bheki Cele’s remarks that more arrests could follow in this matter, and also that the person who pulled the trigger will be among the accused who appeared in court.

“We have to compliment the police. This is a huge step in the investigation and there is a fairly strong case against these five people. The person that pulled the trigger will appear in court on Tuesday,” Nel said.

Zamokuhle Mbatha was arrested in October 2014 over Meyiwa’s shooting and spent two weeks behind bars. In early 2019, Mbatha said that he intended to bring a R17-million lawsuit for wrongful arrest against the state. Mbatha was arrested following links through a police identikit.

On 29 July 2019, Meyiwa’s father, Sam Meyiwa, died without seeing justice for his son’s murder. He was rushed to the Prince Mshiyeni Hospital in August 2018 after suffering a stroke. His health had deteriorated further as a result of the stroke.

The arrest of the five comes after weekend reports which claimed arrest warrants of Meyiwa’s alleged killers had already been obtained. The reports further claimed that police were still investigating whether any of the people who were in the house when Meyiwa was shot, can be charged or linked to his murder.

The Meyiwa family have maintained that they believe the people who were in the house during the incident know what happened to Meyiwa.

Magistrate Hans Havenga told the accused that they were entitled to bring formal bail applications upon satisfying the court that there were exceptional circumstances why it was in the interest of justice that they be granted bail.