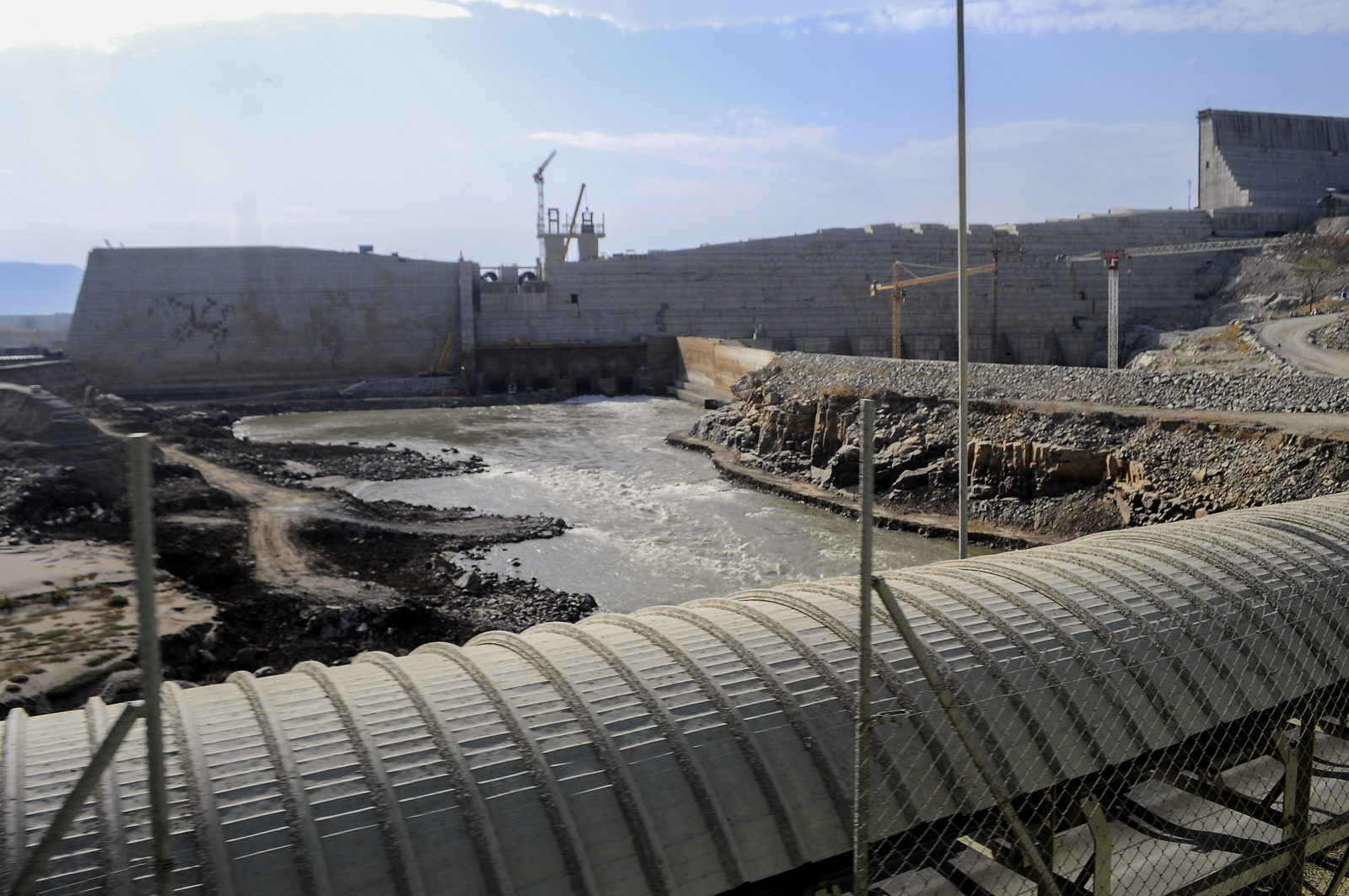 epa08557195 (FILE) View of flowing water next to the construction works for the Grand Ethiopian Renaissance Dam along the River Nile in the Guba woreda (district) of the Benishangul Gumuz Region, eastern Ethiopia, 02 April 2017 (reissued 20 July 2020). South African President Cyril Ramaphosa, in his capacity as chairperson of the African Union (AU), is set to chair a virtual meeting of AU leaders on 21 July to discuss the controversial infrastructure megaproject. According to the office of the South African presidency, the meeting will take place within the context of the bloc's efforts to boost the trilateral negotiations between Ethiopia, Sudan and Egypt and to infuse new momentum towards the resolution of all the outstanding legal and technical issues, including the future development on the Blue Nile upstream, as well as the future dispute resolution mechanism. EPA-EFE/STR

A bitter dispute between the three countries over the filling and operation of the Grand Ethiopian Renaissance Dam (GERD) remains unresolved even after the reservoir behind the dam began filling in July.

“The resumption of the trilateral negotiations on the GERD … is a reaffirmation of the confidence that the parties have in an African-led negotiations process,” Ramaphosa, who is South Africa’s president, said in a statement.

The resumption of talks comes two days after Ethiopia summoned the U.S. ambassador over what it called an “incitement of war” between Ethiopia and Egypt by U.S. President Donald Trump over the dam dispute.

Trump called on Friday for an agreement between the countries, but said it was a dangerous situation and that Cairo could end up “blowing up that dam”.

Sudan’s Irrigation Ministry said talks on Tuesday would discuss a new model for talks giving “a bigger role to experts and observers”.

“Then the new negotiation methods will be put to the heads of state to decide on them and resume negotiations on the basis of a precise timetable,” the ministry said in a statement.

Egypt, which gets more than 90% of its scarce fresh water from the Nile and fears the dam could devastate its economy, left the negotiations in August after Ethiopia proposed a new timeline for filling the GERD.

Trump also said Ethiopia had broken a U.S.-brokered agreement to resolve the dispute, forcing him to cut funds. The United States cut $100 million in aid to Ethiopia in September.

Ethiopian lawmakers said on Monday that “no force on earth” would stop the completion of the dam and that they were ready to defend it from internal as well as external attacks.

“We will defend any possible internal and external attacks and conspiracies and we shall complete the dam,” the lawmakers from the lower House said in a statement. (Additional reporting by Dawit Endeshaw in Addis Ababa and Khalid Abdelaziz in Khartoum; Writing by Giulia Paravicini, Editing by Catherine Evans and Nick Macfie)