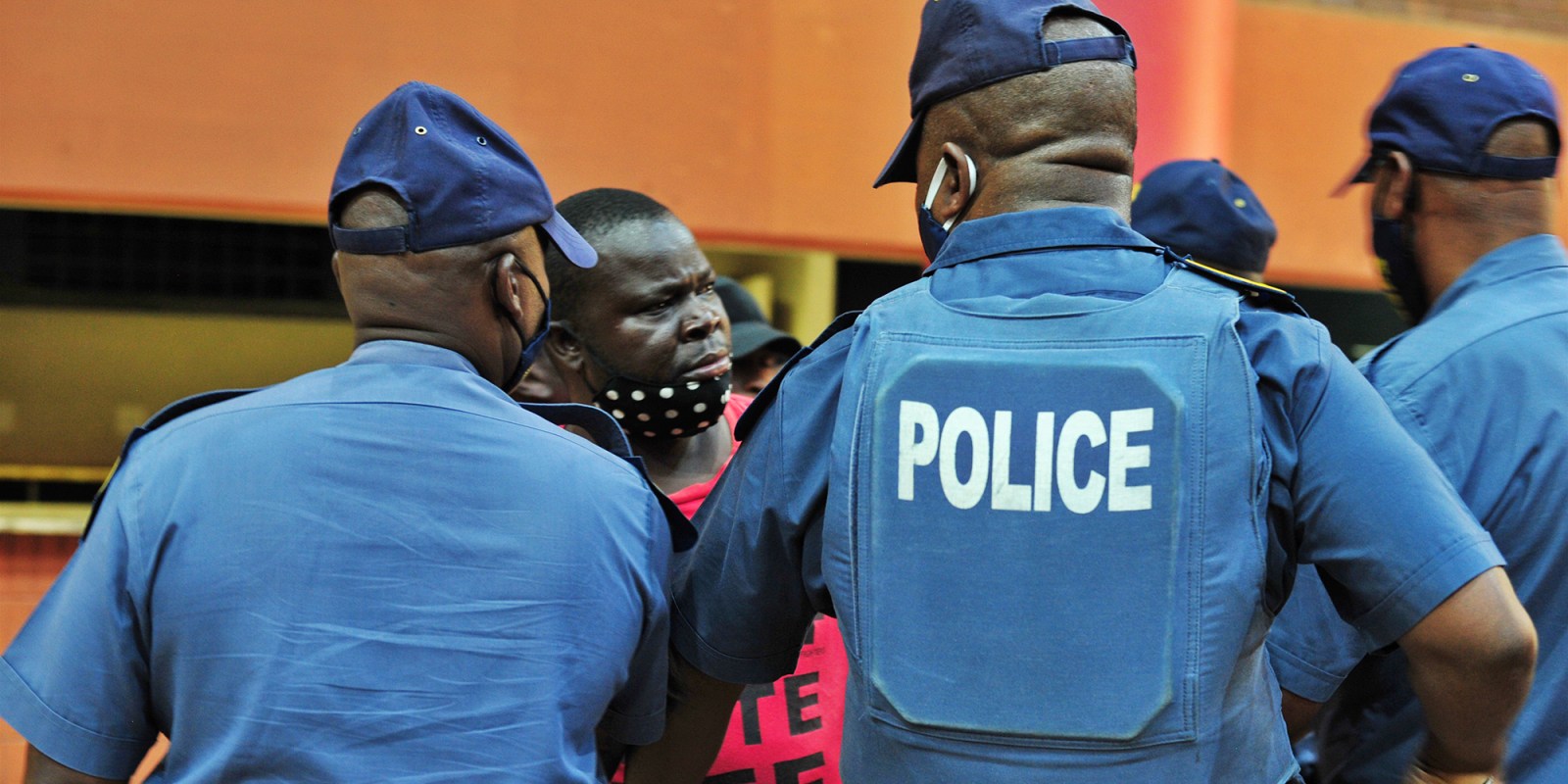 EFF supporters engaged in a standoff with police and security guards who blocked the entrance into the hall. (Photo: Lucas Ledwaba)

A man was apprehended by the police after walking into the venue with a firearm.

A scheduled parliamentary public hearing on Sunday in Polokwane on the Land Expropriation Bill was abandoned after a day-long standoff between the ANC and the EFF.

Co-chairperson of the Ad Hoc Committee to Initiate and Introduce Legislation Amending Section 25 of the Constitution in order to allow for the expropriation of land without compensation, Thomas Bongo, said they cancelled the hearing because of security concerns.

The draft Constitution Eighteenth Amendment Bill was published for comment at the end of last year with the aim of amending the Constitution to provide that where land and any improvements thereon are expropriated for the purposes of land reform, the amount of compensation payable may be zero.

The matter was hotly contested in Parliament after the EFF earlier brought a motion to amend section 25 of the Constitution to allow for expropriation without compensation. The ANC initially refused to support the motion in the National Assembly, but later did so, setting the path for public hearings across the country.

The committee is chaired by the ANC’s Dr Mathole Motshekga. However, Sunday’s sitting in Polokwane was chaired by Bongo in place of Motshekga who was chairing hearings in the Northern Cape.

But the sitting did not take place as scheduled after a day-long dispute which at times threatened to spill into violence when EFF members tried to force their way into the hall, which ANC members had filled, at the Polokwane municipal offices.

This was deemed to be in contravention of Covid-19 lockdown regulations, and Bongo ordered all people out of the hall so they could be allowed in based on a list compiled ahead of the hearings.

This was also to allow them to be put through Covid-19 procedures such as hand sanitising and the taking down of contact details.

But EFF supporters, who were present in big numbers, refused to allow the process to go ahead, saying it was a ploy to ensure that the hearing was dominated by ANC members.

EFF supporters engaged in a standoff with police and security guards who blocked the entrance into the hall. ANC members in yellow T-shirts stood in the parking lot waiting for their leaders to address them.

The tense situation worsened after 2pm when a man wearing an ANC T-shirt walked into a hall adjoining the venue for the hearing wearing a firearm on his waist. EFF supporters, who had been camping at the main entrance since late morning, charged at the man and tried to disarm him.

The police stepped in and marched the man into the hall, where his weapon was taken from him. He was later seen leaving the hall through a side entrance, accompanied by police, with EFF members baying for his blood.

Bongo said when they arrived at 10.30am there were about 1,000 people packed into the hall, singing and not maintaining social distancing as required under lockdown regulations.

He said they asked everyone to leave the hall so that those who were registered to attend could be given first preference. The meeting was adjourned to 2pm to allow for that process but, he said, when they returned the situation was unchanged.

Bongo said the ANC members had arrived earlier than the EFF group, but the red brigade stormed the packed hall after it was announced that it was in contravention of Covid-19 regulations. He said the situation was deemed unsafe as some people were carrying firearms.

EFF MP Ciliesta Motsepe blamed the ANC for the abandonment of the hearing, saying the committee members had tried to get more of their party members into the gathering at the expense of her comrades.

However, Emmanuel Mongwe, chairperson of the ANC Youth League Peter Mokaba region, accused members of “other parties” of disrupting the seating arrangements because they did not arrive on time. He denied that the man carrying a firearm was their member.

Bongo could not say whether or not the hearing would take place at another time, adding that the matter would be discussed before the National Assembly.

The committee is expected to wrap up its public hearings this week after a series of audiences in Western Cape. DM