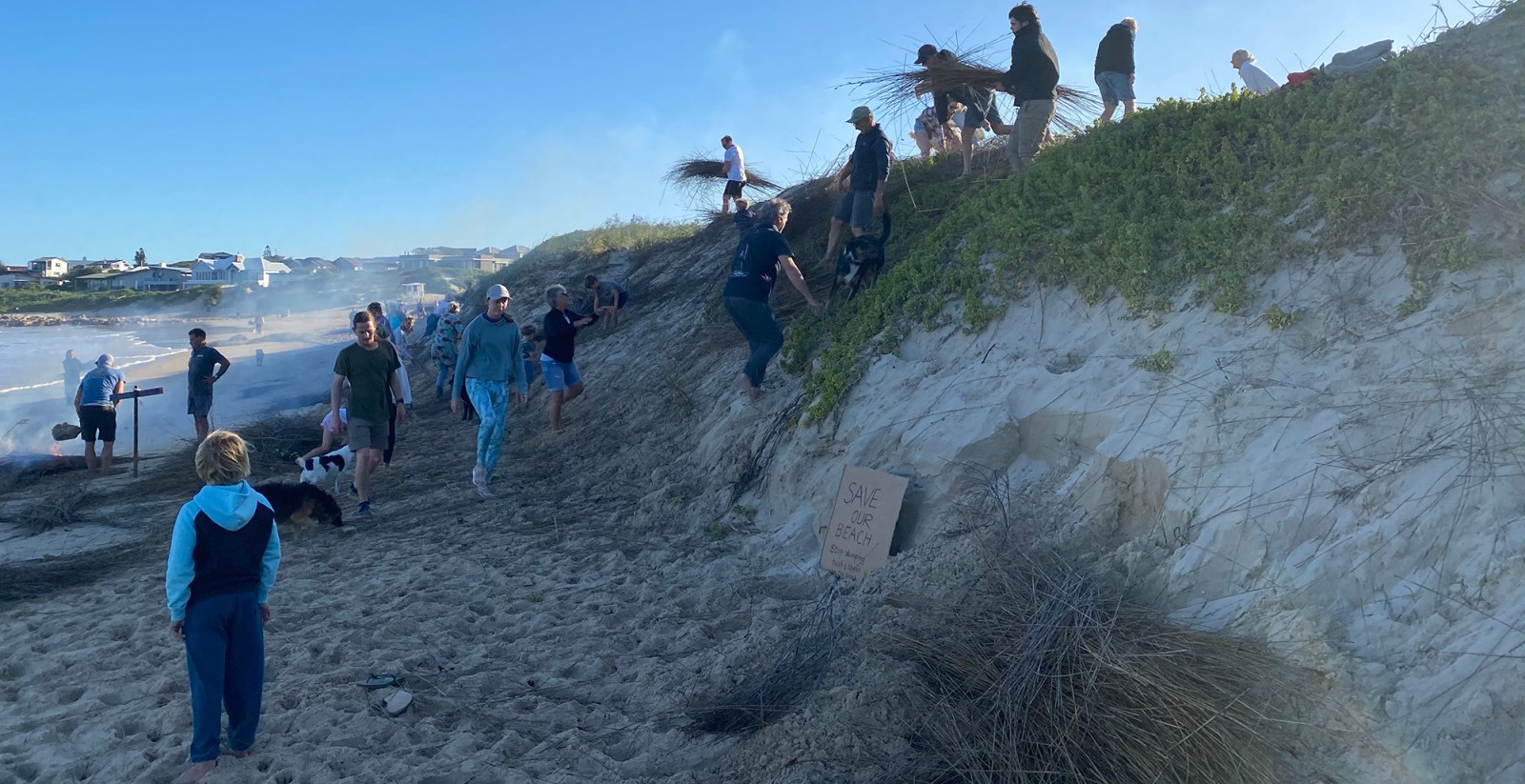 Cape St Francis residents in the Eastern Cape remove thatch from the beach. The thatch had been left for years to stabilise the dunes and residents say it has claimed a lot of public open space. (Photo: Craig Jarvis)

Some of the homeowners in a street of beachfront properties in Cape St Francis have been stabilising the dunes in front of their houses. Some do it to prevent the dunes from advancing over their properties during adverse onshore weather conditions, while others do so to secure uninterrupted views.

The gradual advancement of these dunes has now reached close to 100m of stabilised dune fields from boundary lines and has crept to a point beyond the high tide mark. This has made the Seal Point beach in Cape St Francis unsafe and has created a bank of sand 7m high – the front edge of the stabilised dune. A large section of the beach has been absorbed by this unofficial beach stabilisation, and there is now much less beach for locals and visitors at high tide.

The Seal Point beach is 2.5km in length, but the southern corner is the popular spot. The corner has two car parks, toilets, and lifeguards during the summer. There are surfers, surf schools and good waves there as well. It used to be that, as the corner fills up with people, so the expansion would just see more beachgoers spread further north, from the corner.

Except now there is a vast bank, blocking the way. Without much space in front of it at low tide and with nothing at high tide except waves slapping the edge, the popular corner is now just a tiny, crowded semi-circle and it is unlikely to accommodate the influx of summer holidaymakers.

That’s why on Wednesday 21 October a group of incensed residents marched down to the beach and started removing the dumped thatch. These protesters, who were all Cape St Francis inhabitants, have been witness to this gradual theft of public open space, and have had enough.

The primary method used by the homeowners to stabilise the dunes is to drop old thatch. Residents have been filming people depositing the thatch, slowly watching the dunes creep.

So on Wednesday, aggrieved residents climbed the dunes as one and started removing the thatch.

Some people had pitchforks, others were barehanded. There were businesspeople, surfers and paddlers, village elders and children.

Led by world-renowned vegetation ecologist and conservation scientist Professor Richard Cowling, the protest was part practical, part symbolic. It opened up the eyes of many to the extent of the damage. The sand which should be able to flow back into the sea with the changing tides and wind is now being kept in place by vegetation that is watered through irrigation systems set up by the landowners.

“We have been watching these activities for too long. Now we were actually doing something about it. Viva! I think the protest event was aimed at building community solidarity by enabling a great co-operative initiative that ultimately empowered us,” said Cowling.

The beach changes have been incredibly slow. An infinitesimally small creep that has been barely noticed until now.

The 7m-high sand dune’s creeping progress finally reached the high tide mark though, and a few weeks ago it all became as visible and out of place as a monolith.

“Some of our beaches, those adjacent to areas where development of houses has restricted the free movement of sand to and from the beach, have eroded spectacularly,” said Cowling.

“The problem is that back in the days before regulation via Environmental Impact Assessments, town planners located residential erfs in the hummock dune zone. This is a region of sparsely vegetated dunes and free sand. It sits between the beach and the first properly vegetated dunes.

“While this zone is very dynamic and can tolerate a lot of disturbance by wind, waves or humans, it must remain wild. The reason is that it acts as a sand sump, absorbing sand blown inland by the summer’s easterlies, and then resupplying the beach during winter when the offshore westerlies blow. Building in the hummock zone interrupts this beach-to-dune-and-back-again process, denying the beach a vital source of sand. The result is erosion and the loss of a valuable ecosystem service: an expansive beach for safe bathing at all tides.”

There is most definitely a solution, according to Cowling.

“Given that the homes are there to stay, the best that can be done is to destabilise the artificially fixed dunes in the hummock dune zone and physically move the sand shorewards. This will replenish the beach in the short term. It will also maintain its width in the long term, by enabling the redevelopment of a dynamic hummock zone system.”

That’s the start, but this needs to be maintained.

“Of course,” agreed Cowling. “Continue with bottom-up community activism to remove by hand the vegetation on the dunes, and engage the authorities to ensure responsible actions to physically move sand beachwards.”

The authorities have been engaged though, and the Green Scorpions are aware of what is happening. The Kouga Local Municipality issued a statement in response to questions.

“The resident accused of building up the dune was issued with a directive by the Green Scorpions in December 2018, instructing him to stop all work. The municipality referred the issue to the Green Scorpions again on 5 October 2020 and awaits their recommendations regarding the way forward.”

Dr Tobie Louw, a homeowner in Barcelona Place, said that if the Kouga Municipality restored the dunes in front of Barcelona Place to their original state: “We would be very thankful if it is done the correct and scientific way. We will give our full support, also in the maintenance afterwards.”

When it comes to laying blame, the residents are not interested in wasting time by pettifogging peccadilloes. They just want their beach back, and if they need to, they will go and fetch it. DM

Craig Jarvis is a resident Cape St Francis surfer and journalist. He was part of the thatch-throwing protest on the beach.