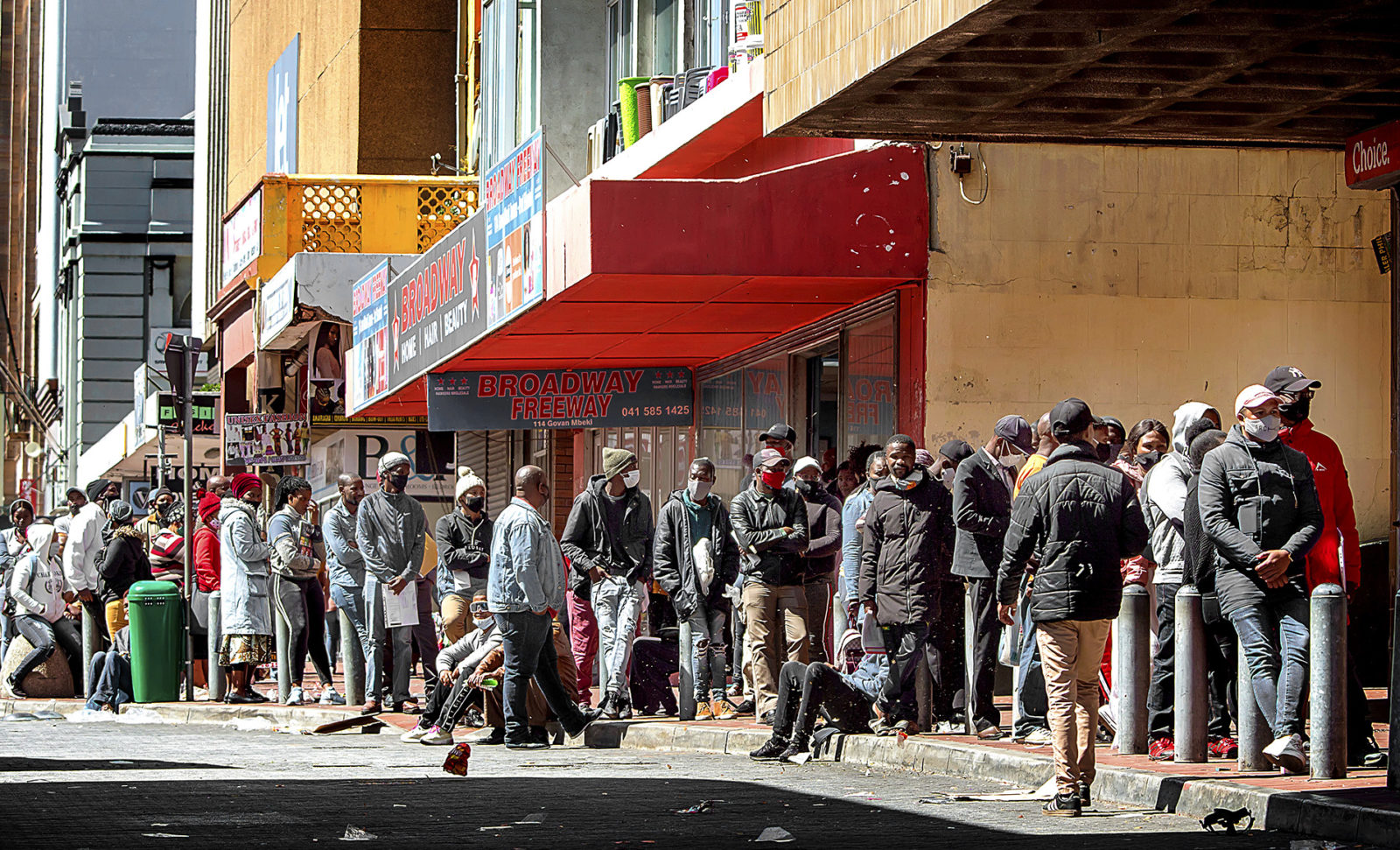 There was no physical distancing at one of the Department of Health's clinics in Port Elizabeth's central business district this week as people waited for treatment. (Photo: Donna van der Watt)

The Minister of Health this week sounded the alarm that the number of Covid cases was on the rise again. Relaxed attitudes are likely to be behind some of them.

Covid-19 came back with a vengeance this week as several provinces registered a marked increase in cases. Funerals, bars and parties were identified as super-spreader events.

As tracing teams look at funerals, parties and bars as potential super-spreaders of coronavirus infections, Minister of Health Zweli Mkhize this week sounded the alarm that the number of cases was on the rise again.

“The risk of a resurgence remains high, we do not do so to instil fear in you … It would be irresponsible of us to ignore ‘small flames’ that we see redeveloping in some parts of the country,” he said.

“These have required an escalated outbreak response, including increased testing and contact tracing,” he said. Teams have been able to establish links between the outbreaks and social gatherings, including funerals and bars.

The premier of the Western Cape, Alan Winde, said that they were very concerned about “the relaxed behaviours we have seen, which may have led to this increase in cases” and “we are not the only province experiencing this, as reflected in the national data”.

“The Department of Health’s own definition of a resurgence is an increase of more than 20% in new cases over a seven-day period. The Western Cape has not recorded such an increase in the past seven days.

“The Western Cape government’s seven-day ‘rolling average’ of new cases indicates 1,757 new cases recorded in the week to 19 October versus 1,546 the previous week. This represents an increase of 13.65% in new cases in the seven-day period. With that said, any increase is a worry for us, and it has our government on full alert and responding,” said Winde.

According to a statement issued by the Free State provincial government, the province registered 237 new cases on Tuesday. But Free State Department of Health spokesperson Mondli Mvambi said they have not noticed any “bushfire infections” in the province yet.

“There have not been any cluster infections linked to nightclubs, funerals, schools or transport,” he said. “We are seeing family clusters where one member tests positive and then infects three or four members of the same family.”

The Eastern Cape’s infection incidence has increased from 19/100,000 to 24/100,000 in the past week, with a huge outbreak linked to a church service in Macacuma near Sterkspruit still not under control.

Zolile Williams, the municipal manager for the Joe Gqabi District Municipality, located in Barkly East but also covering the Sterkspruit area, said in his weekly report that there has been a rapid increase in cases in the Macacuma area near Sterkspruit, which is also linked to cases in Walaza, where a church service had been identified as the source of an outbreak.

“Last weekend, there were 98 active cases at Macacuma and, while some recovered, some new cases were added, and the area is now at 85 active cases.”

In other parts of the province, 11 more cases were linked to the East London campus of Fort Hare University, bringing the total number of cases at the university to 60 on Thursday. A small outbreak of four cases was found in Somerset East, and 11 cases were linked to a residence at Union High School in Graaff-Reinet.

Acting executive mayor of the Nelson Mandela Bay Metro, councillor Thsonono Buyeye, said the number of active cases in the city has jumped from 220 to 396.

Brown said the hotspots in the metro were all places where there is too much socialising and no physical distancing. “People assume their friends or family members don’t have the virus and become careless,” he said.

Gauteng Health Department spokesperson Kwara Kekana said, on the face of it, there does not appear to be a resurgence of cases in Gauteng. DM168