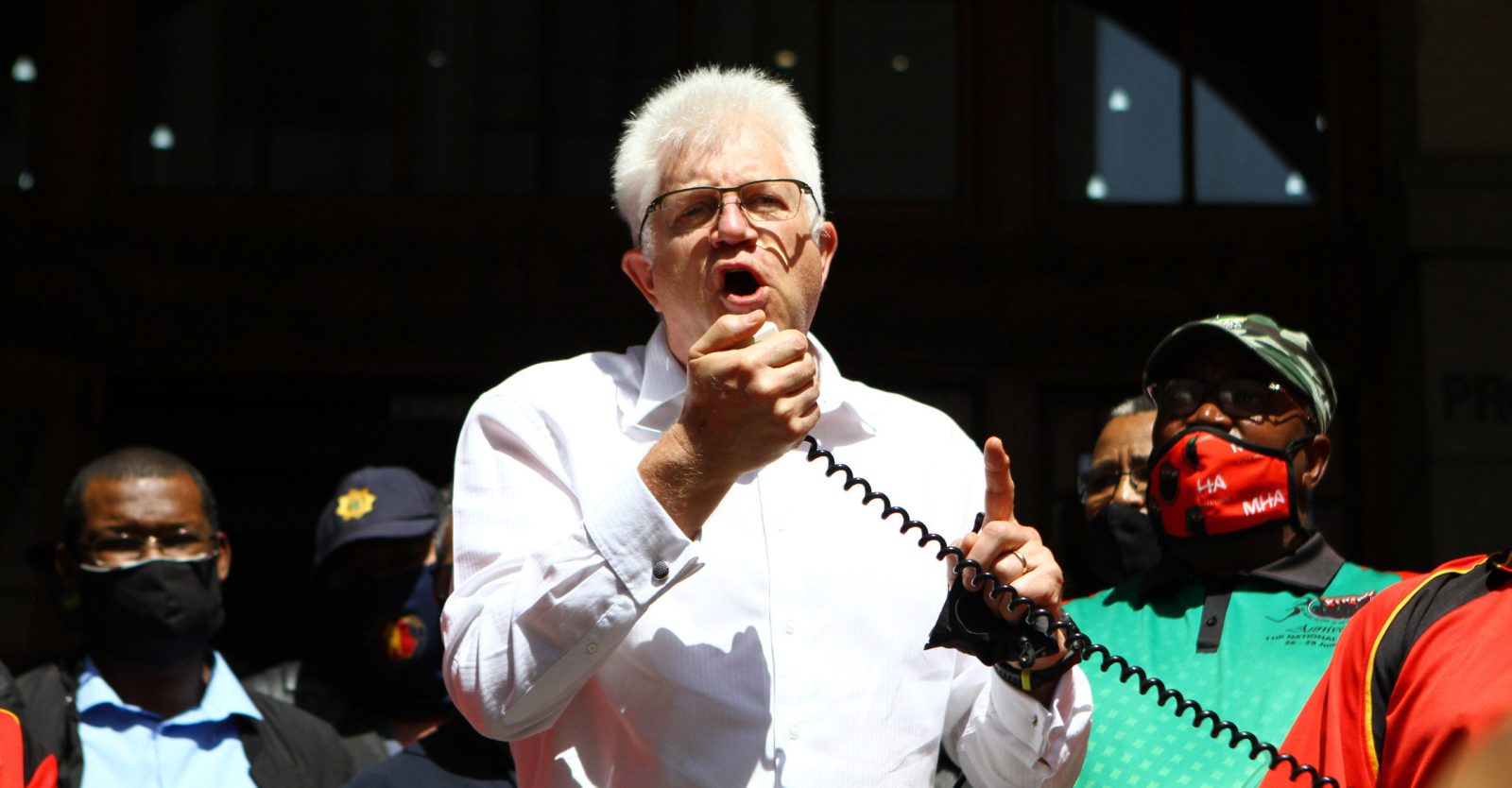 Western Cape Premier Alan Winde says the province is fighting bushfires of Covid-19 using data, contact tracing and screening, and by 'employing all the lessons we have learnt this year'. (Photo: Ziyaad Douglas/Gallo Images via Getty Images)

The Western Cape is starting to make preparations for an economy and society in a post-Covid world. Premier Alan Winde revealed some of these plans, on the backdrop of a Covid-19 ‘superspreader event’ with 89 linked cases, which raised the alarm of Health Minister Zweli Mhkize.

Western Cape Premier Alan Winde says the province is fighting bushfires of Covid-19 using data, contact tracing and screening, and by “employing all the lessons we have learnt this year”. Winde was addressing a special, hybrid sitting of the Western Cape Provincial Parliament on Thursday to outline the province’s recovery coming out of the Covid-19 pandemic.

One of the bushfires Winde referred to was the spread of confirmed Covid-19 cases in Cape Town’s southern suburbs, which was linked to a bar in Claremont.

“We are starting to see bushfires emerge linked to clusters of spread, these bushfires flare up when people don’t follow the important golden rules that will keep you and others around you safe,” said Winde.

Winde urged people to continue wearing masks, practise physical distancing, wash their hands and avoid poorly ventilated and crowded spaces. Winde’s comments came after Health Minister Zweli Mhkize, on Wednesday evening, said there had been an increase in Covid-19 in SA and singled out the Western Cape, saying that the province had a 42% increase in Covid-19 cases reported.

This morning, after reading and analyzing our country’s epidemiological reports, as the Minister of Health, I cannot help but be concerned. Fellow South Africans, when we emphasize that the risk of a resurgence remains high, we do not do so to instill fear in you.

Winde delivered his address on the back of Finance MEC David Maynier’s speech on the provincial and municipal economic review outlooks, which was tabled before the legislature on Tuesday this week.

Referencing the province’s role at the start of the pandemic and the resulting lockdown, Winde said, “When President Ramaphosa announced that South Africa was to go into a hard lockdown, our government did not waste a moment of time in ensuring that we were prepared for our peak of infections that were to come. Our objective was simple: to ensure that every person – no matter where they come from– would get the medical care that they needed, when they needed it.”

In the space of a few weeks, the province built five field hospitals to assist with Covid-19 cases and brought online 41 quarantine and isolation facilities across the Western Cape, said Winde. Other programmes the province came up with were: working with the taxi industry to create specialised transport services for health workers and those needing transport services between and from quarantine sites, supporting food programmes (including launching 2,000 food gardens), using neighbourhood watches to help with social distancing at malls and ensuring patients, especially diabetics, received their medications at home.

But this came at a cost, said Winde.

“I am deeply concerned that provincial budgets will be significantly cut, despite public promises – some made to me personally – that funds spent on Covid-19 would come back to us, and despite the National Treasury continuing to pump money into failing state-owned enterprises like South African Airways,” said the premier.

“The Western Cape government’s budgets over the medium term are likely to be cut by the same amount or more than is now going to be funnelled into the black hole which is SAA.”

Winde told the legislature that “we are confronted with the reality that we have significantly less money to deliver on our mandate and to assist with our province’s recovery”.

Key to this reality is to identify four choices that the province must make in order to move forward, said Winde. “The first relates to prioritisation, the second to efficiency, the third to spending and the fourth to the delivery model that we will use.”

Winde said the province will be bolder than ever – it aims to create 150,000 jobs by the end of the year through its emergency economic relief and recovery programme. Other plans include working with the private sector for infrastructure and investment programmes, increasing exports, as well as building on existing partnerships in the province, including in the taxi industry.

“Our Provincial Minister of Finance and Economic Opportunities, David Maynier, will next month table the Western Cape’s Medium-Term Budget Policy Statement in this parliament, which will include adjustments to the budget, especially in light of the necessary Covid-19 expenditure we have incurred and the projected cuts we are expecting to see,” said Winde.

DA spokesperson Ricardo Mackenzie, said he welcomed Winde’s speech. In a statement, he said, “Under the current battered economic climate, we anticipate budget cuts which will be evident in the upcoming Medium-Term Budget Policy Statement due to years of poor implementation of economic policy by the national government.

“At the provincial legislature we will, however, commit to oversight of the recovery plan tabled by the premier today, and work with the executive to ensure continued agility in our response to every challenge ahead.”

The leader of the opposition caucus, Cameron Dugmore, told Daily Maverick that while Winde talked about the need for courage in the tough task of economic recovery while fighting Covid-19, “He has clearly not demonstrated the courage to deal with the real pathologies of the Western Cape – inequality and the perpetuation of privilege when it comes to land ownership and the actual ownership of the provincial economy.”

Dugmore said “nothing” in what Winde said indicated a serious commitment to redress the inequalities which existed before and became worse during the lockdown.

“I was also disappointed at his attempt to instill fear by claiming budget cuts of R10-billion to the provincial budget but showing no evidence of this… our current budget for 2020 is R73-billion. He claims that R10-billion will be cut over the medium term, yet later in his speech he backs down and says they are awaiting a final figure – this is fearmongering at its worst,” said Dugmore.

On Friday, the legislature will debate Winde’s speech. DM