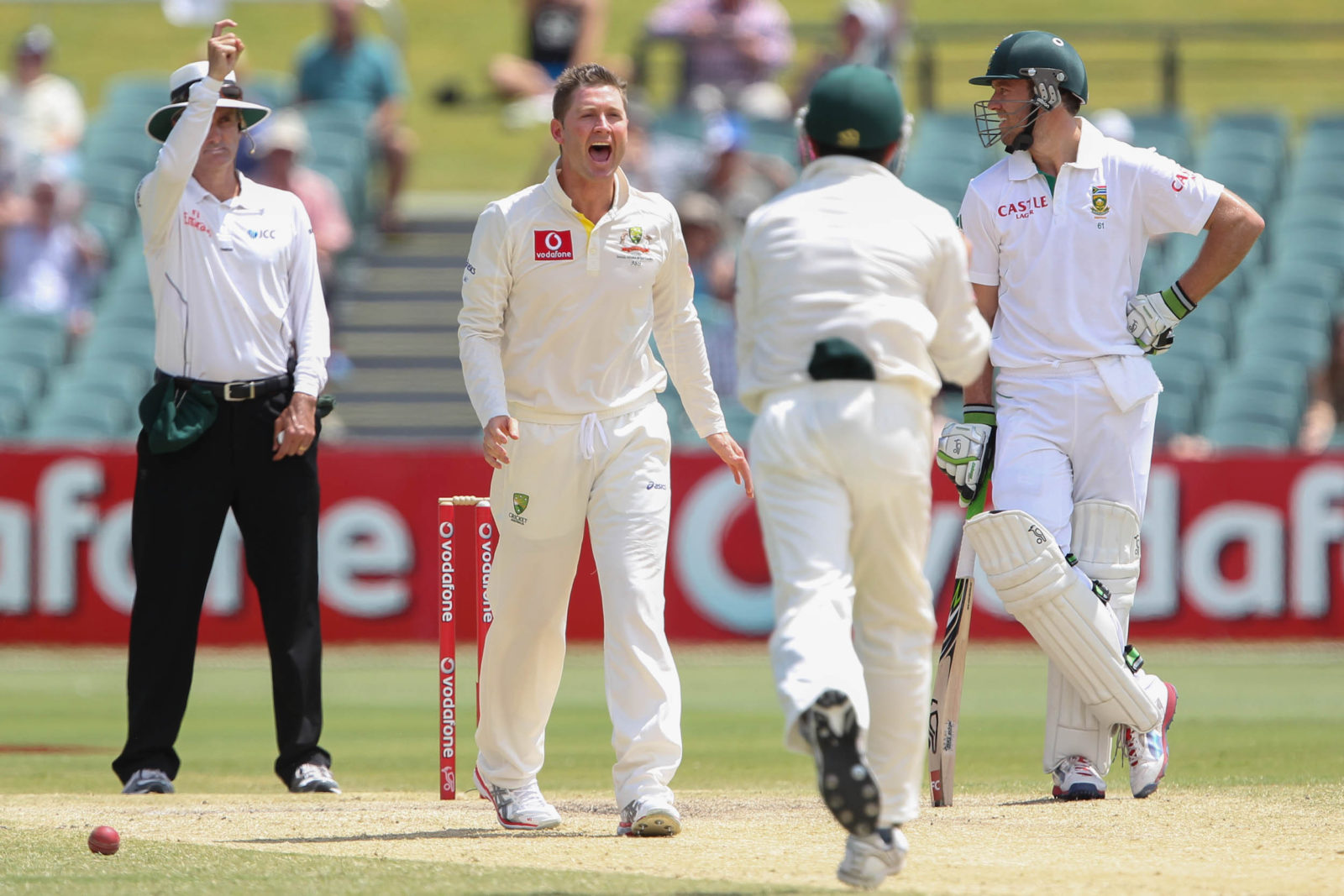 File Photo: Australia's Michael Clarke appeals for the wicket of South Africa's Faf du Plessis but is over ruled by the third umpire during the Australia v South Africa Test Series in Adelaide, Australia, 26 November 2012. EPA/JAMES ELSBY IMAGES TO BE USED FOR NEWS REPORTING PURPOSES ONLY, NO COMMERICAL USE WHATSOEVER, NO USE IN BOOKS WITHOUT PRIOR WRITTEN CONSENT FROM AAP AUSTRALIA AND NEW ZEALAND OUT

CSA’s sorry suits cling to power despite cricket’s highest authority telling them to relinquish their positions. But they may be gone by Sunday. Or Tuesday, when Nathi Mthethwa has his say.

Hell no, they won’t go. The Cricket SA (CSA) board, that is, who dug in their heels in defiance of the latest demand for them to step down at a meeting on Thursday that went from tense to chaotic.

The South African Sports Confederation and Olympic Committee (Sascoc) have called for CSA’s board to move aside. So has Minister of Sport Nathi Mthethwa. On Thursday, CSA’s own Members Council — South African cricket’s highest authority — joined the chorus.

And yet, the board remains in office; apparently oblivious to the mess they have made of almost everything they have touched. Under their watch cricket has spiralled from financial to ethical to governance crises, which have trailed in their wake a slew of resignations, suspensions and dismissals — including that of Chris Nenzani, who quit as president in August, and Thabang Moroe, who was fired as chief executive in the same month.

Another Members Council meeting on Sunday morning could change the narrative by forcing the board into submission and, if that doesn’t work, Mthethwa could have the final say. He has given CSA until Tuesday to give him reasons why he shouldn’t take control of the game.

At Thursday’s meeting, Daily Maverick has been told by several sources, the Members Council — which comprises representatives of CSA’s 14 provincial affiliates — asked the entire board to relinquish their positions.

“The feeling was that it would be prudent that the whole board, including the independent directors, should step aside, especially as the minister is now involved,” one source with direct knowledge of the meeting said.

More than three hours of bilious bickering later, that hadn’t happened. Instead, threats of legal action were being slung back and forth.

The situation is complicated by the fact that the six non-independent board members — the real villains of the many pieces cricket has been shattered into in the past two years — also sit on the Members Council. Effectively, they are being asked to vote themselves out of a job that earns each of them up to R400,000 a year.

The board is likely to meet before they report back to the Members Council on Sunday. What if they still want to cling to power and privilege?

“Maybe that wouldn’t be the worst thing, because you would have corporate memory to work from and they could be replaced by an interim committee by the minister, as per Sascoc’s proposal,” the source above said. “That structure could include a former player and someone from the International Cricket Council (ICC), and they could find out if anything has been covered up.”

According to online encyclopaedia Simplicable, corporate memory is “the ability of an organisation to retain information to improve strategy, decision-making, problem-solving, operations and design”. Entities that suffer from “low corporate memory” are “doomed to repeat the same mistakes and reinvent things repeatedly in a costly loop”. To illustrate this entry in their publication, Simplicable could do worse than use CSA’s logo.

The board were first asked to step aside in September by Sasacoc, who were acting under Mthethwa’s instruction. After meetings between CSA and Mthethwa failed to bring push to shove, Beresford Williams, CSA’s acting president, took a belligerent tone in a letter to the minister, telling him he didn’t have the authority to sweep the board aside — and interactions with Parliament went sour and the government got tough and imposed Tuesday’s deadline.

Mthethwa could cut cricket’s funding and tell the ICC that CSA are no longer the official custodians of the game in South Africa, effectively taking the Proteas out of the international arena.

Cleverly, Mthethwa has shown that he has the interests of cricket-minded South Africans at heart by granting approval, along with the ministries of health and home affairs, for England’s men’s team to tour next month to play six white-ball internationals in bio-secure environments in Cape Town and Paarl. That comes despite the UK featuring on a list of 20 countries whose level of Covid-19 infection is too high, government has deemed, to allow contact with travellers.

Whether Mthethwa, Sasacoc or an interim committee will be in control of the game by the time CSA holds their annual meeting on 5 December is not at all clear. But the buck is highly unlikely to stop with the current sorry lot. DM