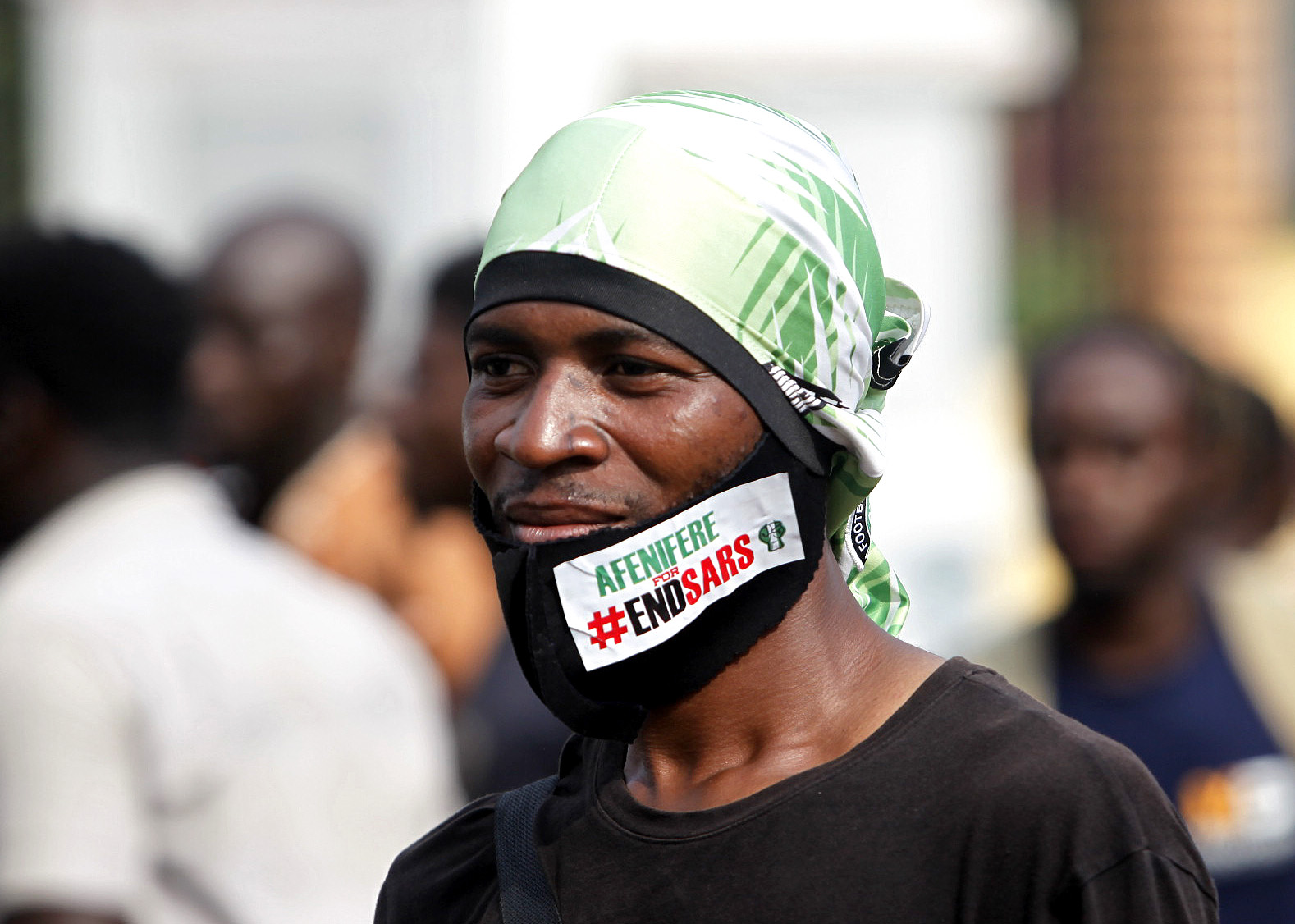 A protester wears a face mask with the inscription 'ENDSARS' during a protest against the Nigeria rogue police, otherwise know as Special Anti-Robbery Squad (SARS), in the Ikeja district of Lagos, Nigeria. (Photo: EPA-EFE/AKINTUNDE AKINLEYE)

The recent protests against police brutality by disenfranchised young people in Nigeria are a response to a problem that has been a long time in the making, with the violent response showing up systemic failures.

The rot in the Nigerian system has been developing over a long period. The inequality of the political system, especially in the systematic non-inclusion of young people in governance, pitches the government against the young people. There is a concentration of power in the hands of older leaders, with young people feeling that there is no hope of being included or having power transferred to them over the long term.

Apart from that, the nation’s economy is in a parlous state, with its debt spiralling. Infrastructure and services such as electricity, roads, pipe-borne water and healthcare have collapsed.

The country’s currency, the naira, has been devalued twice unofficially and is almost worthless against all major currencies of the world.

Nigeria’s debt is in excess of ₦30-trillion (R1.28-trillion). Only recently, there was a 100%  hike in the electricity tariff. Added to that, the pump price of petrol was hiked from ₦138 (R5.87) to ₦149 (R6.34) per litre. These increases have a direct effect on the purchasing power of the average Nigerian. The minimum wage of civil servants is ₦30,000 (R1,276) per month and most find it insufficient. In addition, the majority of those in employment are under-employed.

The unemployment rate in the country, according to statistics released by the National Bureau of Statistics (NBS), is hovering above 30%. Added to this is the fact that the 2019 global Multidimensional Poverty Index (MPI) found that more than 98 million of Nigeria’s 200 million people are multidimensionally poor.

Unimpressed with how the government is running the affairs of the nation, especially with the somewhat nonchalant attitude towards the extortion and extrajudicial killings by members of the Special Anti-Robbery Squad (SARS), a unit of the Nigeria Police, a coalition of civil society organisations started the #EndSARS protests two weeks ago, in early October 2020.

The organisers of these protests had the capital, Abuja, and Lagos, the most populous city in Nigeria and on the African continent, as the epicentres, although they have representatives in all the 36 states of the federation. The protests took place simultaneously because the participants are unemployed youths or university undergraduates who have been at home for more than seven months because of the industrial action embarked upon by the Academic Staff Union of Universities (ASUU).

Over the years, members of the SARS have arrested and profiled young people, claiming that they are, among other things, committing cybercrime. Youths with dreadlocks and ripped jeans were randomly arrested and interrogated. Most of those arrested by SARS were extorted, while not a few women were raped. Worse still, many of those who were arrested and unable to pay a ransom were killed extrajudicially.

There has also been an orchestrated attempt by the conservative political elite in the geopolitical North to give the protest a North/South divide colour. The impression being created is that #EndSARS protesters are bent on bringing down the government of President Muhammadu Buhari, who is from the Muslim North.

The #EndSARS protesters had five demands:

The federal government acceded to all the demands – although the government had previously made similar promises but never kept them. State governors were directed to institute judicial panels of enquiries in their respective states to investigate claims of extrajudicial killings by members of SARS. The Inspector-General of Police, Mohammed Adamu, dissolved SARS and announced a new body known as Special Weapons and Tactics (SWAT) on 13 October 2020. The police chief also promised that no member of the dissolved SARS would be admitted into SWAT.

Of note is the fact that for the almost two weeks that these protests had lasted, they were not only well-coordinated, but also peaceful. The protests do largely not have a leader or leaders at the various state levels. Where this is not the case it has remained a closely guarded secret. Volunteers are responsible for the organisation of the protests. The efficiency with which they execute their project has been impressive.

The protesters had demanded to be addressed by Buhari on their demands and the way forward, but Buhari appears content to speak to the protesters through third parties. With the benefit of hindsight, it can be said that the government had underestimated the resolve of the protesters.

Events took a turn for the worse late last week, when hired hoodlums on the government’s payroll started infiltrating the peaceful protests. They were armed with dangerous weapons including guns and machetes. In some  incidents, police officers watched them attack the protesters, unrestrained. The agitators, according to eyewitness accounts, were conveyed to the protest venues by police trucks and special vehicles of the Department of State Services (DSS). This infiltration, it was gathered, was to serve as an alibi for the government to clamp down on the protesters.

With the protest taking its toll on the fragile economy and the country shutting down piecemeal, the various state governors in exercise of their constitutional duties on Monday 19 October declared a 24-hour curfew. In one day alone, no fewer than seven states, including Lagos, declared curfew. According to the Lagos state governor, the curfew was to commence at 9pm on Monday.

The Lekki tollgate area in Lagos, where the bulk of the protesters had been camping out for days, became the scene of bloodshed on Tuesday 20 October. At around 7.30pm, CCTV cameras and lights were turned off by persons believed to be security agents. Military men shot their way into the area and killed a yet to be ascertained number of unarmed protesters in cold blood.

Before their arrival, the soldiers had cut off the electricity supply to the venue, causing the area to be plunged into darkness. When the soldiers arrived, the protesters remained seated on the ground, holding national flags and singing the national anthem. The soldiers opened fire on them regardless. The local media reported different figures of casualties and wounded, who are in various hospitals in Lagos receiving treatment.

Earlier on Tuesday Buhari had met the Minister of Defence, General Bashir Salihi Magashi, at the presidential villa in Abuja. The outcome of the meeting was not made public. It is believed to have centred on how to contain the protests. There are also strong indications that the president may explore the provisions of the 1999 Constitution, as amended, on declaration of a state of emergency in the affected states. If the president opts for the above, he will need buy-in from Parliament.

The current situation in Nigeria is unpredictable. Whatever happens, there is much pent-up anger among the population, and apprehension everywhere. This is because protest in Nigeria has a way of assuming a religious dimension, which often leads to reprisal killings. Besides poor leadership, there is the belief that the Buhari administration in its appointments and policies is deliberately skewed towards the North.

Micah Felix is a public commentator writing from Nigeria.