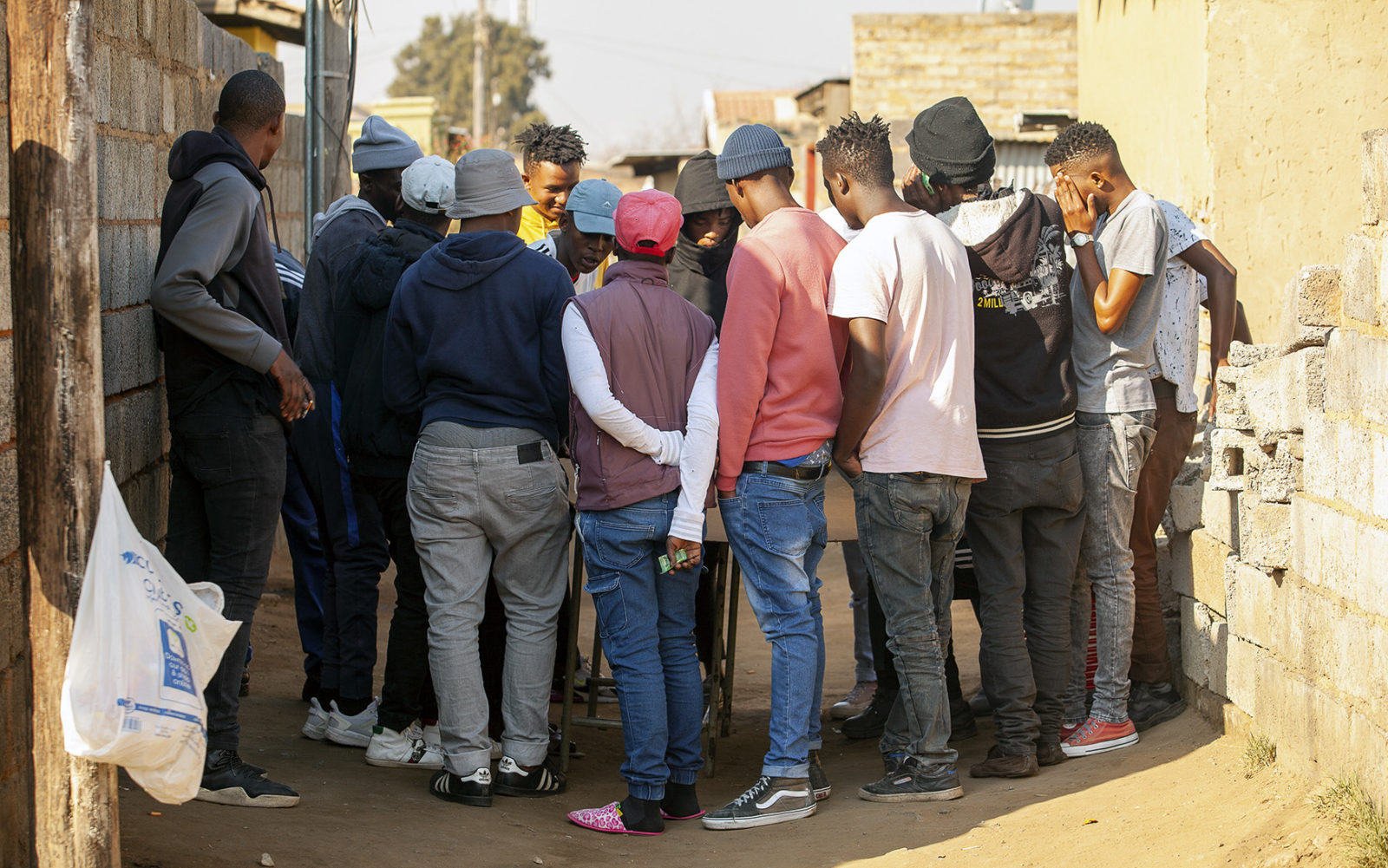 Resurgent, second-wave outbreaks of Covid-19 around the world have coincided with a sense of public non-compliance and exhaustion, says the writers. (Photo by Gallo Images / Papi Morake)

Relaxed attitudes about Covid-19 distancing, mask wearing and other preventative measures put the country at risk of a significant resurgence.

There is mounting disquiet in South Africa about a significant relaxation in adherence to Covid-19 preventative behaviours, such as mask-wearing in public, avoiding mass gatherings and social events, and physical distancing.

As countries around the world continue to experience appreciable second waves in coronavirus infections, questions about the role of personal responsibility, behaviour and underlying perceptions have come into sharp relief, prompting debate and policy attention to the role of – and response to – what has been termed pandemic or caution “fatigue”.

This article uses data from the UJ/HSRC Covid-19 Lockdown Survey to show that public perceptions of pandemic-related risk have been changing, and argues for continuous, clear health promotion messaging if we are to minimise the chances of a sizeable second wave of the virus.

Pandemic fatigue as a growing concern

While recognising the sacrifices that people have had to make in the face of the pandemic and national lockdown responses, the World Health Organisation (WHO) argues that months of uncertainty, social disruption and personal strain has resulted in a rising tide of pandemic fatigue. This concept refers to a personal sense of “demotivation to follow recommended protective behaviours, emerging gradually over time and affected by a number of emotions, experiences and perceptions”.

The WHO refers to a range of reasons for this non-adherence to safety measures, some of which include a loss of confidence in the government, diminished perceptions of risk, and a tendency towards complacency.

While pandemic fatigue is receiving increased attention internationally, some academics have expressed reservations about the use of pandemic fatigue as a concept to explain increasing non-compliance with Covid-19 regulations. The sources of concern include the view that it is too general a concept to guide targeted policy responses, and a lack of scientific evidence to prove the role of behavioural fatigue in pandemic situations and responses.

Whatever position one assumes on the “fatigue” debate, any premature reduction in preventative behaviour poses a fundamental challenge for a society such as South Africa where daily confirmed case numbers are non-negligible.

In the Western Cape, authorities have noted an increase in incidents of non-adherence to Covid-19 protocols. The City of Cape Town’s environmental health practitioners are particularly concerned about the number of people in public without masks, as well as crowd management in shops, malls and other public amenities. Prof Abdool Karim, chair of the Covid-19 ministerial advisory group, has similarly warned about complacency, mass gatherings and eased travel restrictions as factors that are increasingly likely to make a second wave in the country inevitable.

We now turn our attention to some of the more disconcerting evidence from our survey about changing risk perceptions and behaviour in the transition to lower levels of the national lockdown.

The UJ/HSRC survey shows that, as the country moved through lockdown levels 3 and 2 between early July and early September, signs emerged of a change in Covid-19 risk perceptions among the public. This is evident in responses to measures of self-reported fear, outlook on the pandemic, perceived personal risk of infection, and threat exaggeration. A review of temporal changes across all our survey measures suggests that these were the items that altered significantly, with more nominal variation evident for most other indicators.

Psychological research has suggested that fear tends to be associated with risk-averse behaviour. In this sense, fear can be functional in that it encourages adherence with public health measures, such as distancing, mask-wearing and handwashing practices. The shadow side of fear is that it can have a damaging effect on the quality of life, especially through its effect of mental and physical health. Our survey shows that frequent feelings of fear remained at a consistently high level from April through July, ranging between 44% and 47%. However, this fell to 31% during August and early September. While nonetheless high, this is a considerable decline and is of note when considering parallel changes in risk perception measures.

During our initial surveying during the hard lockdown in April and early May, the predominant view provided by respondents was that the worst of the pandemic was yet to be experienced (Figure 1). Slightly over half (51-54%) were of this opinion, with about a fifth selecting the status quo and recovery options. The “worst to come” view was more prevalent by the time Round 2 of the survey began in the first half of July, mentioned by three quarters (76%) of respondents. Yet, over the next seven weeks until early September, this fell appreciably to 33%, with growing shares instead saying that the situation will improve or remain stable in coming months. 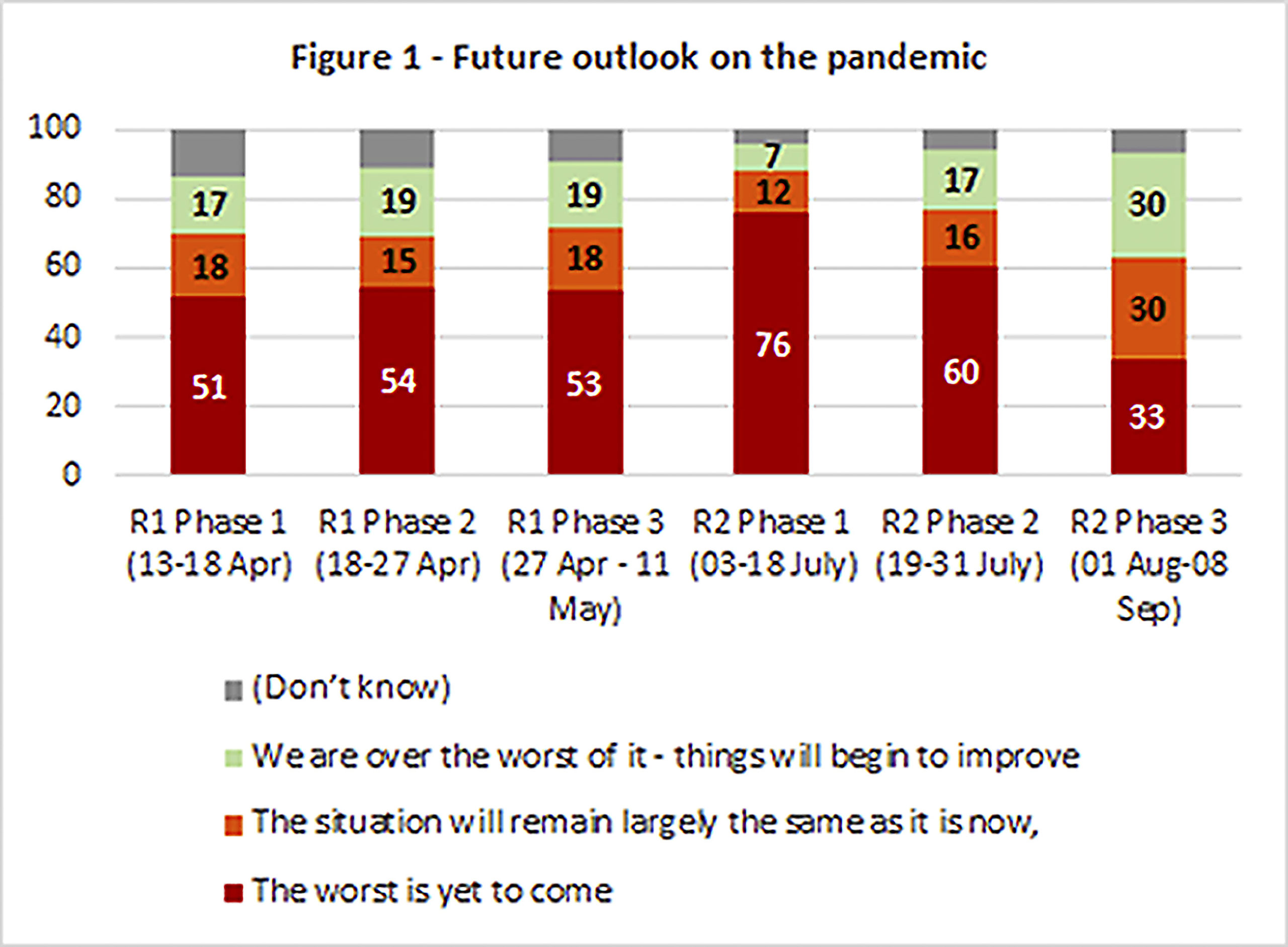 During Round 1 of our survey between mid-April and early May, there was a slow increase in the share of respondents stating that they thought it was likely they would become infected in coming months (Figure 2). This rose from 25% to 30% on aggregate during this period. Two months later, when Round 2 of surveying resumed, this figure had risen to 40% (3-18 July).

This is likely to reflect the intense surge in confirmed Covid-19 cases and deaths that occurred in June and July. The sense of risk, however, eased off again in subsequent weeks, falling to 30% in the latter half of July, and again to 25% during August and early September. This coincided with the slight easing of Level 3 restrictions at the end of July and the move to Level 2 on 17 August. 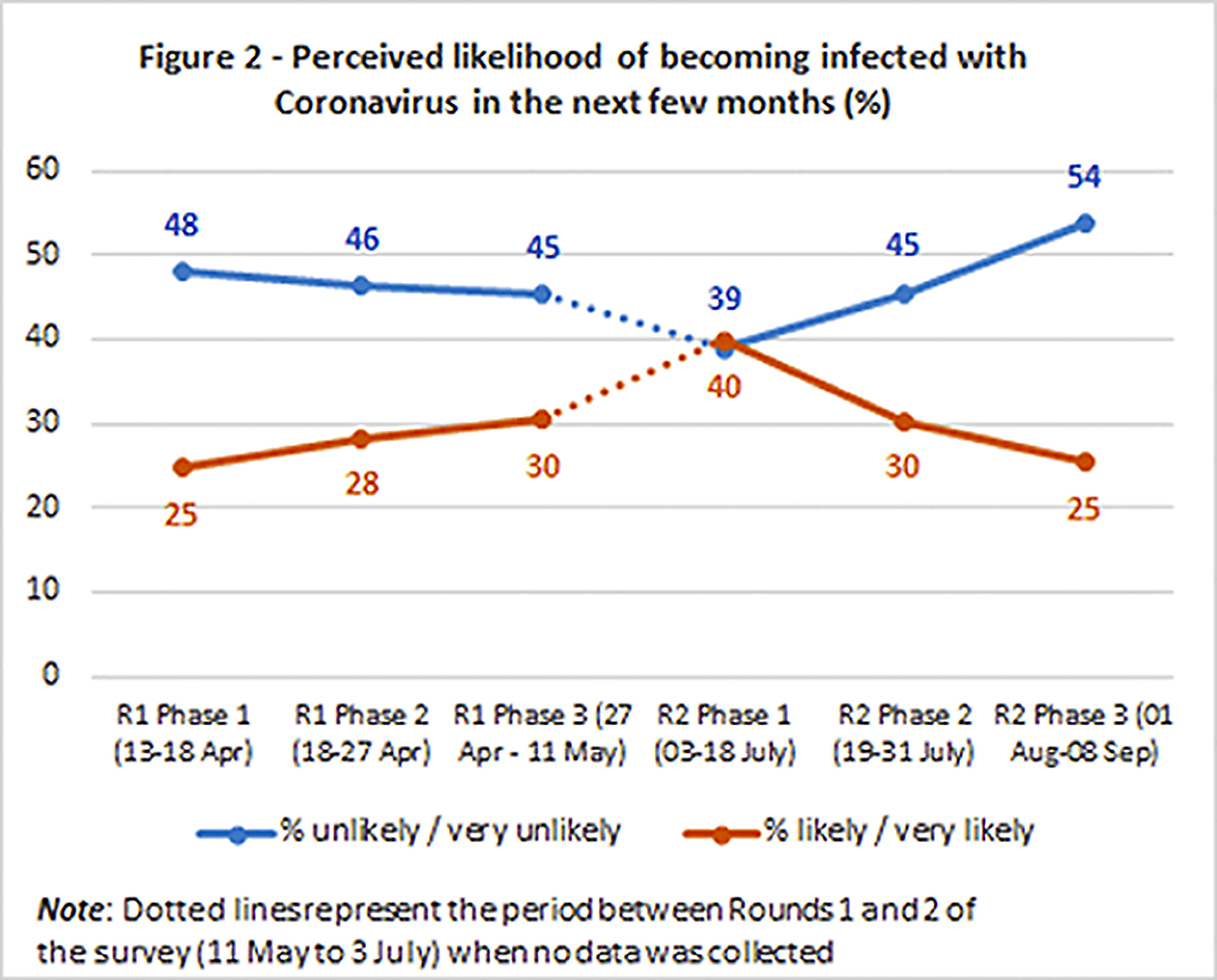 Belief that coronavirus threat is exaggerated

During the hard lockdown, the share believing that the threat posed by the pandemic has been overstated ranged between about a third and two-fifths (35-42%) (Figure 3). This exceeded the share that was more sceptical in its appraisal, although about a third of the public (31-34%) held this worrying belief at the time. By July, a reversal had occurred, with more citizens supporting (39%) than refuting (33%) the exaggerated threat viewpoint. This pattern maintained throughout July to early September, with the share challenging the idea of exaggerated threat declining several percentage points further (from 33% to 28%). 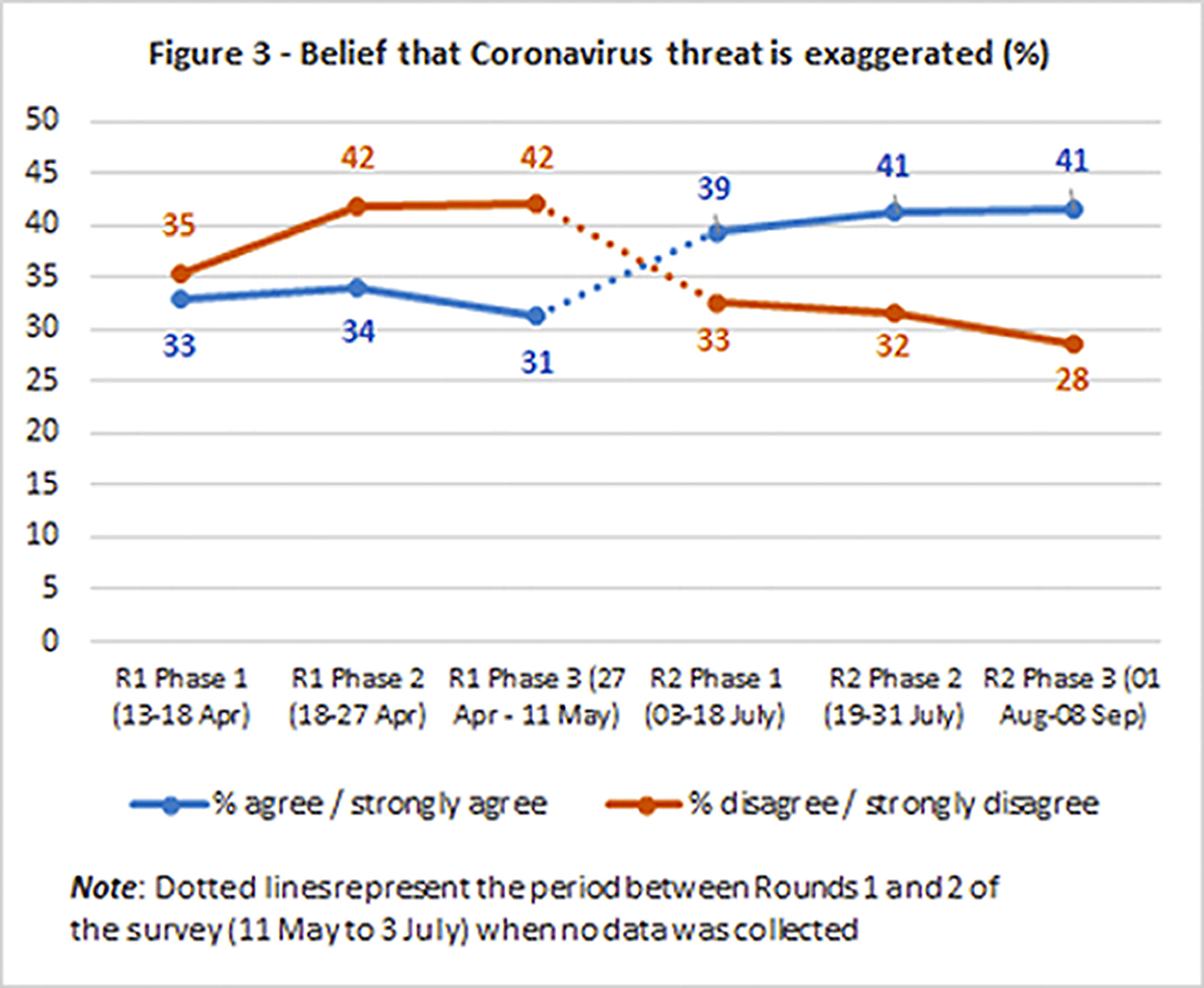 Apart from the dynamics outlined above, there is even evidence of a shifting view of risk present in preferences regarding schooling during Covid-19. During July, many were in favour of abandoning the school year (58-63%), with barely more than a tenth (13-14%) favouring a full reopening for all grades, and a fifth (20-21%) opting for a limited return of grade 7 and 12 pupils only. In August and September, as schools began reopening, a shift in perspective occurred, with the share opting for abandoning the school year falling from 58% to 33%, and the unconditional reopening rising from 14% to 35%.

Taken together, this set of findings clearly suggests that the public generally began to view the pandemic differently under lower lockdown levels. Past studies of public reactions to pandemics have tended to focus on changing risk perceptions in understanding overarching patterns of compliance. Based on the survey results, South Africans seem to increasingly be de-emphasising risk, which in turn might be influencing regulatory compliance and safety behaviour.

A recent article based on our survey data reveals that there has not been any real drop in the number of people who say they will always wear masks in public (ranging between 71% and 75%). The fact that a sizeable minority are not consistently wearing masks in public is worrying, and our data does not address whether masks are being correctly worn.

Not wearing masks or the ineffective wearing of them need to be juxtaposed against other reported personal experiences of our respondents. For instance, between July and September, 45% reported having been in taxis where passengers were not wearing masks, 50% travelled in full minibuses, and 23% attended funerals with more than 50 mourners. Many also reported a lack of appropriate distancing while queuing in shops, health facilities and workplaces.

Such behaviours and experiences, combined with moderating risk perceptions, again should ring warning bells from a health promotion perspective, especially during such times. A possible silver lining is that there remains concern among large shares of the public about the fact that people are not taking safety measures seriously enough. Some of the personal messages provided by respondents powerfully convey this unease:

Resurgent, second-wave outbreaks of the virus in other countries have coincided with a sense of public non-compliance and exhaustion. One of the more crucial lessons from the pandemic in South Africa and other world regions was the need for continuous health promotion messaging that appeals to individual and collective responsibility and strict adherence to basic safety measures.

This needs to be straightforward and clear in content. New outbreaks in confirmed infections, coupled with progressive noncompliance in basic health behaviour, and the risk of super-spreader social events and transportation protocols means that action needs to be taken now if we are to avoid a devastating rise in cases as we head towards the end-of-year holiday season and start to 2021. DM/MC

Benjamin Roberts is a research director, Narnia Bohler-Muller is a divisional executive, and Ngqapheli Mchunu a PhD researcher in the Developmental, Capable and Ethical State research division at the HSRC. Martin Bekker is a researcher at the Centre for Social Change at the University of Johannesburg and an independent development consultant.

Data was collected in the online multilingual UJ/HSRC Covid-19 Democracy Lockdown Survey from willing respondents in South Africa aged 18 or over. The survey was administered using the #datafree Moya Messenger App on the #datafree biNu platform or using data via https://hsrc.datafree.co/r/ujhsrc. Results are weighted by age, population group and education, making them broadly indicative of the attitudes and behaviour of the population. A third round of the survey is planned for the latter half of November 2020.

A summary of the survey’s Round 1 and 2 findings and a fuller explanation of the methodology can be found at: