Lift sanctions unconditionally, says Zimbabwe’s president in his State of the Nation Address 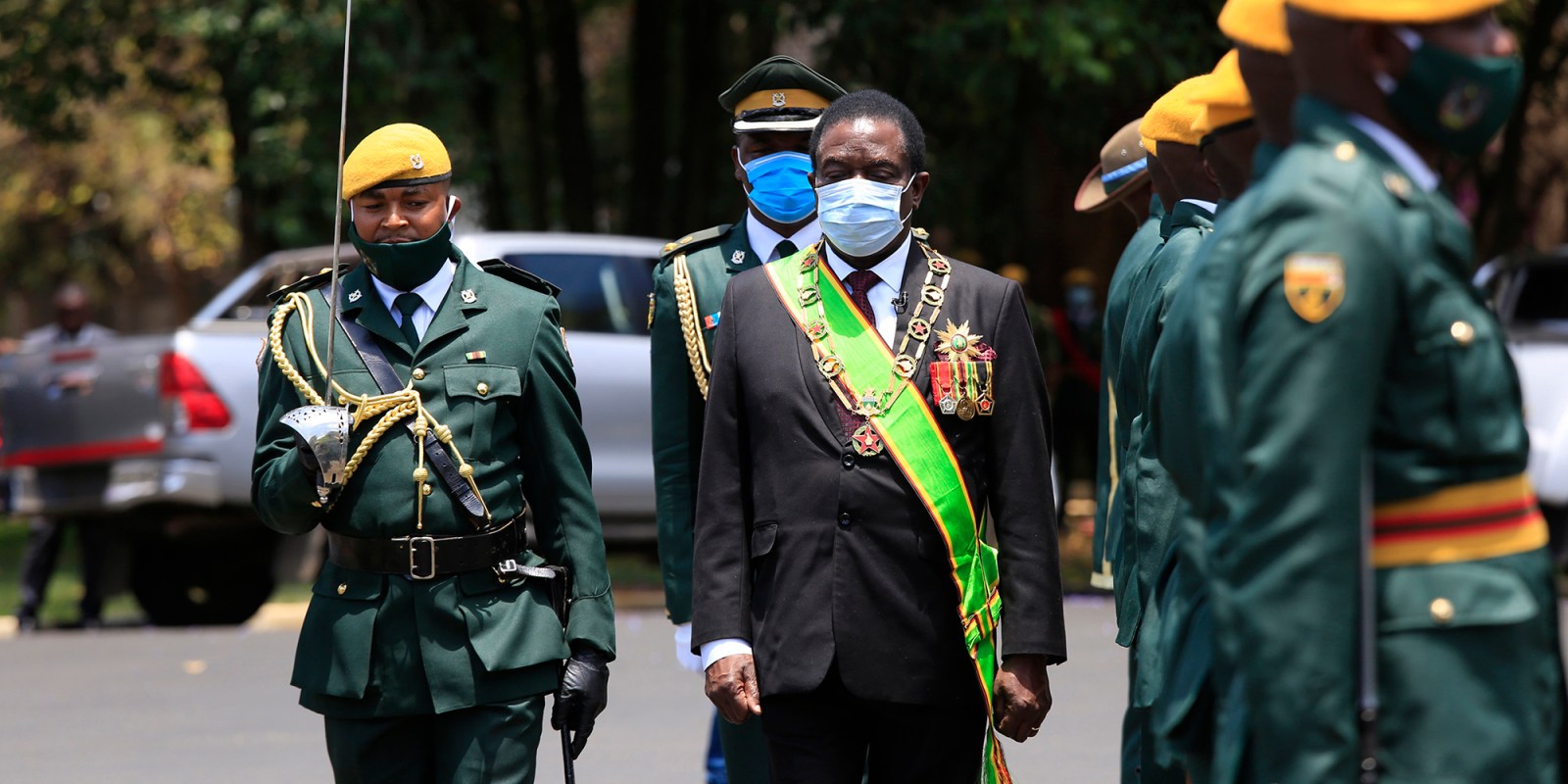 Zimbabwean President Emmerson Mnangagwa, centre, inspects a guard of honour before delivering the State of the Nation address and to officially open the third session of the Ninth Parliament virtually, at the State House in Harare, Zimbabwe, on 22 October 2020. (Photo: EPA-EFE / Aaron Ufumeli)

Zimbabwean President Emmerson Mnangagwa says his country’s economy is poised for growth despite sanctions imposed on the country by the West.

Delivering his State of the Nation Address at State House during the official opening of the third session of Zimbabwe’s ninth Parliament, Zimbabwean President Emmerson Mnangagwa urged the international community to lift sanctions immediately, saying they were hurting ordinary Zimbabweans.

The European Union and the US imposed sanctions on some senior Zimbabwean officials, including Mnangagwa and his inner circle, in 2002 for gross human rights violations and vote-rigging.

“We call upon those that imposed sanctions on us to lift them unconditionally,” said the Zimbabwean leader. He added that despite the restrictive measures imposed on Harare, his government had made significant strides in improving the country’s economy, which took a downturn following Zimbabwe’s chaotic land reforms embarked on in 2000. The Commercial Farmers’ Union of Zimbabwe has said that more than 4,000 productive white commercial farmers were booted off their properties at the height of the land seizures, which Mnangagwa said are “irreversible.”

“It is pleasing to note the immense progress made in the mining sector towards the realisation of a [US]$12-billion mining sector by 2023. Concerted and collaborative efforts must be urgently pursued to conclude the amendments to the Mines and Minerals Act. This will in turn usher in necessary processes for the amendment of the precious stones and gold trade acts.”

Mnangagwa said his government was planning to boost tourism to achieve a sector growth of US$5-billion by 2030 through amendments that encourage tourism investment and wildlife management. He said that stability and improvements in the economy had resulted in a decrease in imports and the growth of exports and foreign currency receipts, while other sectors of the economy, including energy, tourism and agriculture, were “poised for growth”.

Although Mnangagwa’s government had previously said there was no crisis in Zimbabwe, the Zimbabwean leader confirmed during his televised speech that there were problems.

“Let us continue in unity and resolve to find solutions to challenges which confront us. No matter the challenges and no matter the obstacles, whether natural or manmade, let us always seek to promote our national interest, in unity and love, for the development and prosperity of our beloved country,” he said.

Mnangagwa has received support for his anti-sanctions call from regional blocs such as the Southern African Development Community (SADC) and the African Union. The SADC executive secretary, Dr Stergomena Lawrence Tax, told Daily Maverick that other SADC countries were feeling the heat of sanctions imposed on Harare.

“The sanctions have caused suffering among Zimbabweans and continue to have far-reaching effects on Zimbabwe and the entire SADC region. The Zimbabwe Democracy and Economic Recovery Act, as was passed by the United States Congress in 2001 and the subsequent amendments, is particularly harmful to the economy of Zimbabwe and [the] welfare of Zimbabweans.

“The act punishes Americans who support multilateral funding to Zimbabwe and discourages doing business with Zimbabwe’s strategic economic entities. This has left our sister republic without external support for capital projects,” said Tax.

“It is commendable that Zimbabwe is now among the top five doing-business reformers in Africa and top 20 improvers on the ease of doing business scores in the world. Sanctions must be lifted and must be lifted now, there is no justification for their continuation at all.”

The 78-year-old Zimbabwean leader also threatened to ban some non-government organisations that he accused of operating outside their mandates.

“The conduct of some non-governmental organisations and private and voluntary organisations who operate outside their mandates and are out of sync with the government’s humanitarian priority programmes remain a cause for concern,” said Mnangagwa.

He warned that a bill governing the operations of non-government organisations would be tabled in Parliament.

“This august house will therefore consider the Private Voluntary Organisations Amendment Bill to revamp the administration of NGOs and PVOs [private voluntary organisations] and correct the current anomalies.”

The threat by Mnangagwa comes at a time when many NGOs are assisting starving Zimbabweans with food handouts. The UN’s World Food Programme recently said that more than five million Zimbabweans, especially in rural communities, required food aid as the country had not harvested enough food this year due to the El Niño-induced drought.

Mnangagwa’s State of the Nation Address was boycotted by the main opposition Movement for Democratic Change Alliance (MDCA) party led by Nelson Chamisa, although a faction of the opposition calling itself MDCT participated.