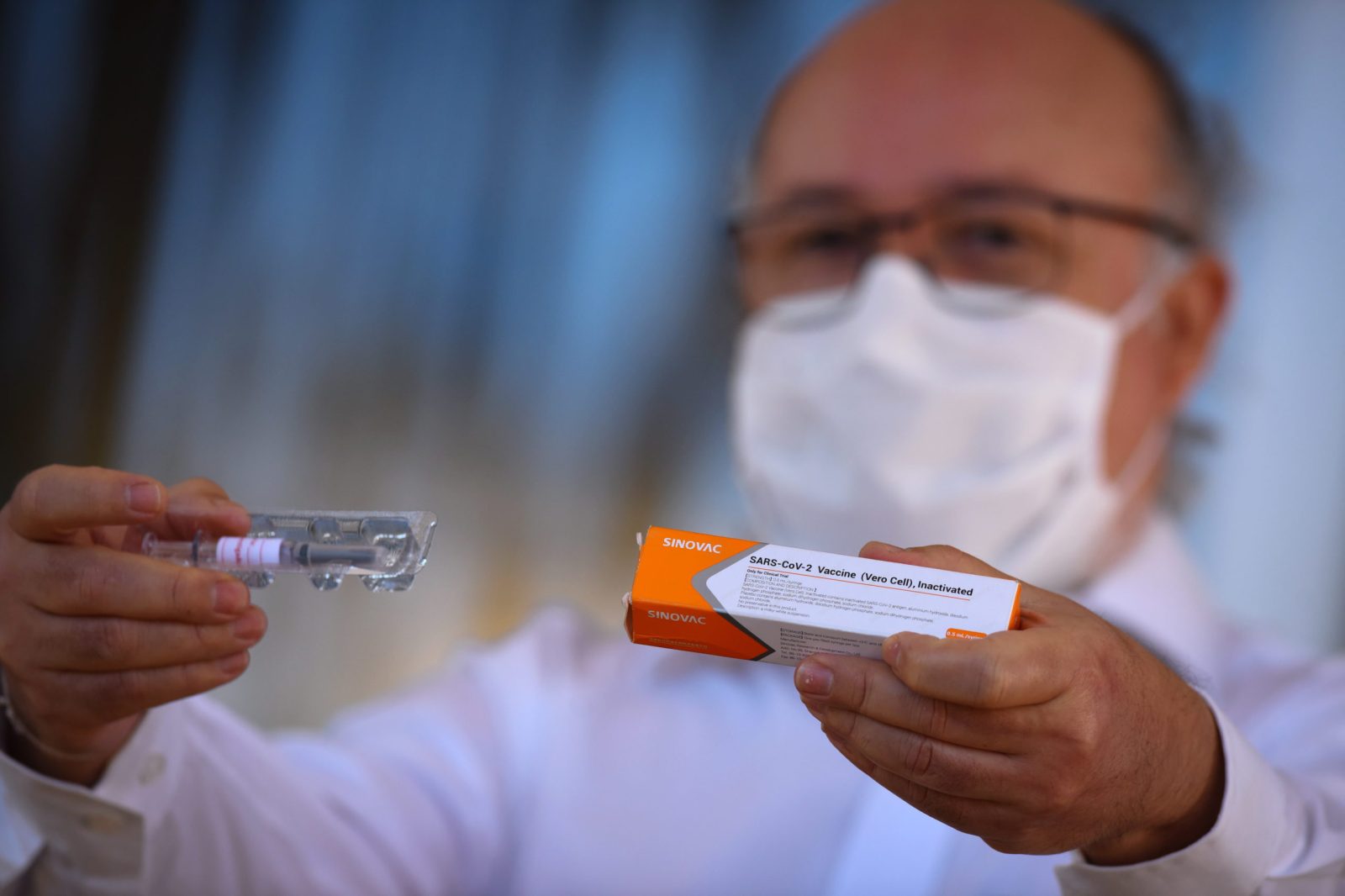 epa08585725 Gustavo Romero, Professor of Medicine, who coordinates research on the coronavirus vaccine (COVID-19) in Brazil, shows a dose of Sinovac's coronavirus vaccine in a Phase 3 trial at the University Hospital of Brasilia, in Brasilia, Brazil, 05 August 2020. The vaccine will be used in patients in Brazil starting today. EPA-EFE/Andre Borges

BRASILIA, Oct 21 (Reuters) - Brazil's President Jair Bolsonaro said on Wednesday the federal government will not buy a COVID-19 vaccine from China's Sinovac, one day after the health minister said it would be included in the nation's immunization program.

The apparent about-face follows anti-China social media commentary by some of Bolsonaro’s supporters and thrusts into the open a simmering debate over vaccine policy between the president and key governors, who have been exploring alternatives to the AstraZeneca vaccine the federal government has prioritized.

On Tuesday, Health Minister Eduardo Pazuello said in a meeting with state governors that the ministry would buy the Sinovac vaccine to include in the immunization program, along with the AstraZeneca/Oxford vaccine. That inclusion would be contingent on approval by drug regulator Anvisa, he said.

Then on Wednesday, the Health Ministry announced that Pazuello has tested positive for the virus, making him the latest Brazilian official to do so. Bolsonaro tested positive earlier this year.

Sao Paulo state biomedical research center, the Butantan Institute, is testing the Sinovac vaccine, and Governor João Doria said he hopes to have regulatory approval by the end of the year to start vaccinating people in January.

But Bolsonaro said on Wednesday Pazuello had been misinterpreted during the meeting with Brazil’s governors.

“For sure, we will not buy the Chinese vaccine,” Bolsonaro said on social media, responding to a supporter who urged him not to buy the vaccine.

Later in the morning, health ministry official Elcio Franco said all vaccines would be forced to go through federal health approval channels, but that the government had no interest in “Chinese vaccines.”

Bolsonaro, a far-right leader who has drawn close to U.S. President Donald Trump, has made disparaging remarks about China in the past, even though it is Brazil’s largest trade partner.

Sinovac did not immediately respond to request for comment.

‘THE VACCINE IS WHAT IS GOING TO SAVE US’

Butantan Institute director Dimas Covas told reporters that manufacturing of 46 million doses of the Sinovac vaccine would go ahead and be made available even if not included in the federal immunization program.

Sao Paulo governor Doria, who announced on Tuesday that the federal government had agreed to buy the doses of the Sinovac vaccine, argued in its favor on Wednesday.

“The vaccine is what is going to save us, save us all,” he told reporters.

“It’s not ideology, it’s not politics, it’s not an election that will save us. It’s the vaccine,” added Doria, who is viewed as a potential opponent for Bolsonaro in the 2022 presidential election. The president has minimized the gravity of the virus and criticized lockdowns that governors such as Doria have enforced.

Brazil has been among the world’s hardest hit nations by the pandemic, with more than 5 million infections and nearly 155,000 COVID-19 deaths, according health ministry statistics.

The inclusion of the vaccine, called CoronaVac, in the national vaccination program of a nation of 230 million people would be a major success for Sinovac in what could be one of the world’s first immunization efforts against the coronavirus.

The Brazilian government already has plans to purchase the AstraZeneca vaccine and produce it at its biomedical research center FioCruz in Rio de Janeiro.

On Wednesday, Anvisa said a volunteer involved in the trial of the AstraZeneca vaccine had died.

But both Anvisa and Oxford said the trial would continue, with a source familiar with the matter telling Reuters that it would have been suspended had the volunteer been in the group that received the vaccine.

The Butantan Institute said on Monday that preliminary results from late-stage clinical trials of CoronaVac on 9,000 volunteers have proven that the two-dose Chinese vaccine is safe. Covas said efficacy data will not be released until trials are completed.