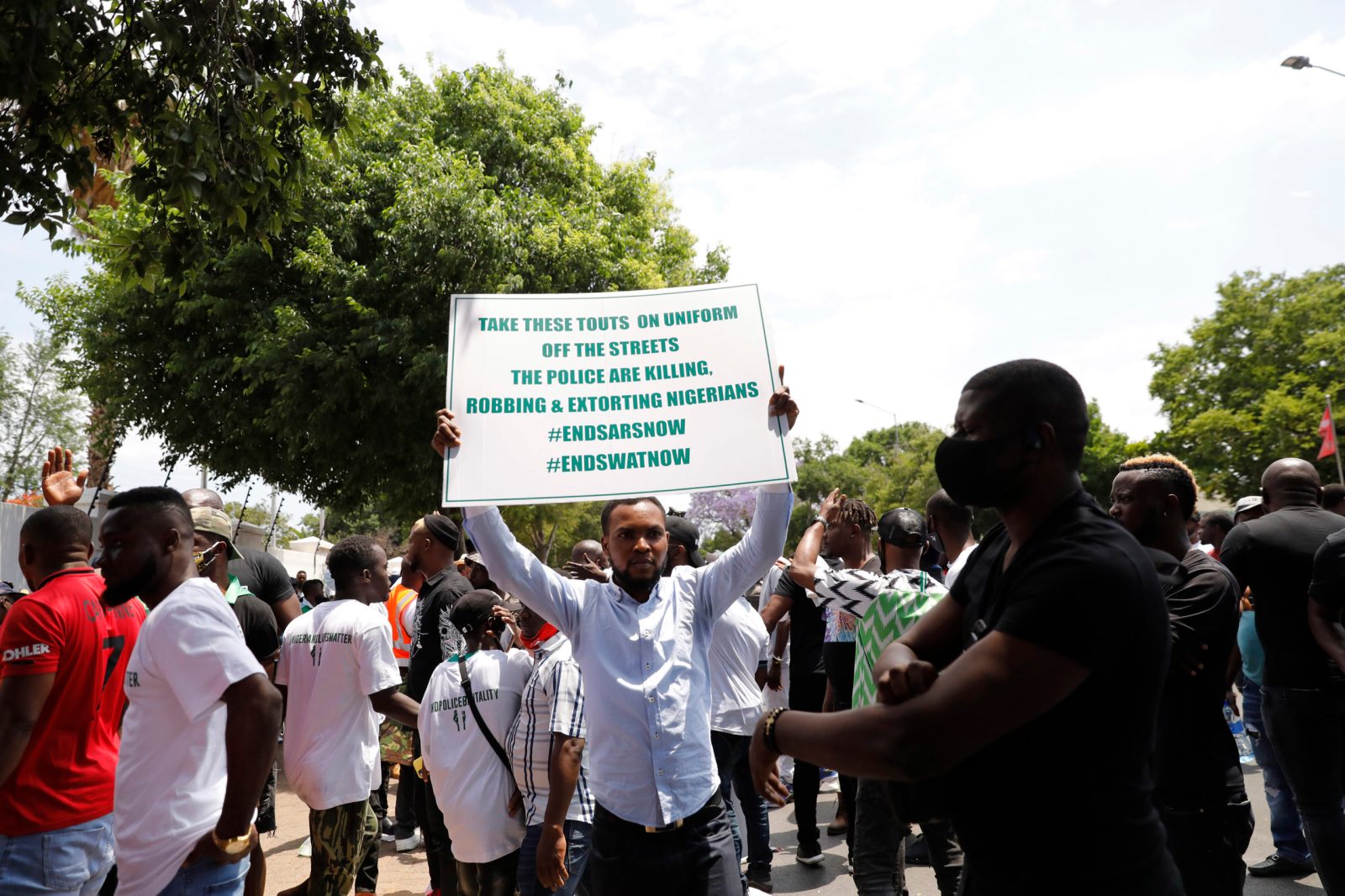 Protesters picket outside the Nigerian embassy in Pretoria. There was a simultaneous protest in front of Parliament in Cape Town, and earlier protests elsewhere in the world including in the UK, the US and Australia. (Photo: Phill Magakoe)

As police enforced a round-the-clock curfew in Lagos after the army reportedly shot protesters there, angry Nigerians living in South Africa came out in their hundreds to march peacefully to their country’s high commission in Pretoria to protest against Nigerian government failings.

Every Nigerian in South Africa has a story about why they are here, said Michael Ijeoma, a 42-year-old entrepreneur who came out with about 1,000 of his countrymen to protest in front of the Nigerian High Commission in Pretoria in solidarity with the #EndSARS protests back home.

Many of these stories involve young people feeling that Nigeria is not a place that encourages or allows people to reach their full potential. “At some point you get frustrated, and you just want to leave, and that’s why most of us left,” Ijeoma said.

There was a simultaneous protest in front of Parliament in Cape Town, and earlier protests elsewhere in the world including in the UK, the US and Australia.

“The [#EndSARS] protest is really about fixing the country,” said Ijeoma, who has lived in South Africa for 15 years.

“A bunch of cops gone rogue is not enough to set our country on fire,” Ijeoma said.

“#EndSARS is an epitome of a system that is dysfunctional, that has no vision, a leadership that does not see the value in its youth.”

Protests in Nigeria, which have been going on for almost two weeks now, took a turn for the worse late on Tuesday when soldiers reportedly opened fire and killed protesters in Lagos’s Lekki district after the government announced that there would be a curfew after 4pm.

Lagos state governor Babajide Sanwo-Olu said in a tweet that one person had died in hospital while 25 others had been hospitalised, but United Nations Secretary-General António Guterres said there had been “multiple deaths” and he urged authorities to de-escalate the situation.

Amnesty International said it was investigating “credible but disturbing evidence” of the excessive use of force and found at least 12 protesters had died, while Human Rights Watch urged authorities to “immediately withdraw the military from the street” and prosecute those who were responsible. The International Committee for the Red Cross has asked that Nigerian Red Cross Society Volunteers as first responders be given access to do their work unimpeded and deliver first aid to the wounded.

Sanwo-Olu on Wednesday apologised for the “incident” that took place in Lekki and pleaded with protesters to “give peace a chance”. Many of the protesters on the street in Pretoria, however, said they would like to hear President Muhammadu Buhari himself address Nigerians on the matter, as the elderly head of state has not made an appearance in recent weeks. He did issue a statement through his spokesperson on Wednesday appealing for “understanding and calm”, adding he was committed to justice for the victims of brutality. He also said the police reforms demanded by protesters after the dissolution of SARS were gaining pace.

In South Africa, the Inkatha Freedom Party called on President Cyril Ramaphosa, as African Union (AU) chairperson, to “step up and act” on the situation in Nigeria and to raise the matter at the UN Security Council, while the African Transformation Movement also called on the AU to act. Trade union federation Cosatu threw its weight behind the protests, saying even after the recent dissolution of SARS “the newly created police unit will just be the same menace in new uniforms”.

The #ENDSARS hashtag has been used on Twitter since 2017 to protest the actions of Nigeria’s Special Anti-Robbery Squad (SARS), but the recent physical protests were sparked when a video went viral which allegedly showed SARS officers killing an unnamed young man in the southern Delta state.

Nigeria’s SARS was set up in 1984 to combat rising crime and kidnappings, but Amnesty International documented at least 82 cases of torture, ill-treatement and extrajudicial executions by SARS between January 2017 and May 2020. Celebrities have joined in on the protests and Twitter has allocated a special icon to the hashtag.

Although the protest in Pretoria was planned well ahead of time, the incident the night before appears to have spurred more people to take to the streets. One protester carried a banner printed with the picture of General-Brigadier Francis Omata, whom protesters allege was the officer in charge of the soldiers in Lekki at the time of the incident, next to a picture of spent bullets. (The Nigerian Army, in a tweet, denied that soldiers were deployed there.) Another group of protesters had a picture of Buhari on their car window calling him the “murderer-in-chief” while yet other protesters carried posters saying “Buhari must go” and “Buhari is a motherf**er bad pikin [child]”.

Official printed posters – the organisers wanted the event to be non-partisan – carried messages including: “They are doing more killing than protecting us”, “We are one nation. We feel one pain”, “Stop killing the dreams of Nigerian youths”, and “Start geniune restructure of Nigeria. Start proper welfare programme for every Nigerian”.

Hashtags like #NigerianLivesMatter printed on T-shirts echoed the #BlackLivesMatter movement that gained ground in the US in July after the death of George Floyd at the hands of the police. Nigerian singer Eedris Abdulkareem’s 2004 hit Jaga Jaga was one of a number of songs booming from speakers on the back of a bakkie at Wednesday’s protest.

Despite their anger, protesters were largely peaceful, although tempers ran high when they demanded that Nigerian High Commissioner Kabir Bala address them and hurled empty plastic water bottles at the high commission’s gate. Police officials stood ready with rubber bullets but the tension was defused and there was no need to use these. The water bottles and other rubbish were cleared up by protesters themselves when they dispersed just after noon.

One protester, 39-year-old Sam Apata, founder of the 67CEOs Foundation, which mentors CEOs in South Africa, said the march was “strategic” as protesters want Ramaphosa and the AU to act.

“The theme for the AU for 2020 is silencing the gun, but how can the AU say that and then the same gun was used against peaceful protesters in Nigeria?” he said.

Another protester, 24-year-old politics masters student Zhayna Olaitan, said “the whole world needs to understand that this is the fight of the Nigerians against the Nigerian government for long years of police brutality”.