Lagos locked down after protesters fired on, president urges calm 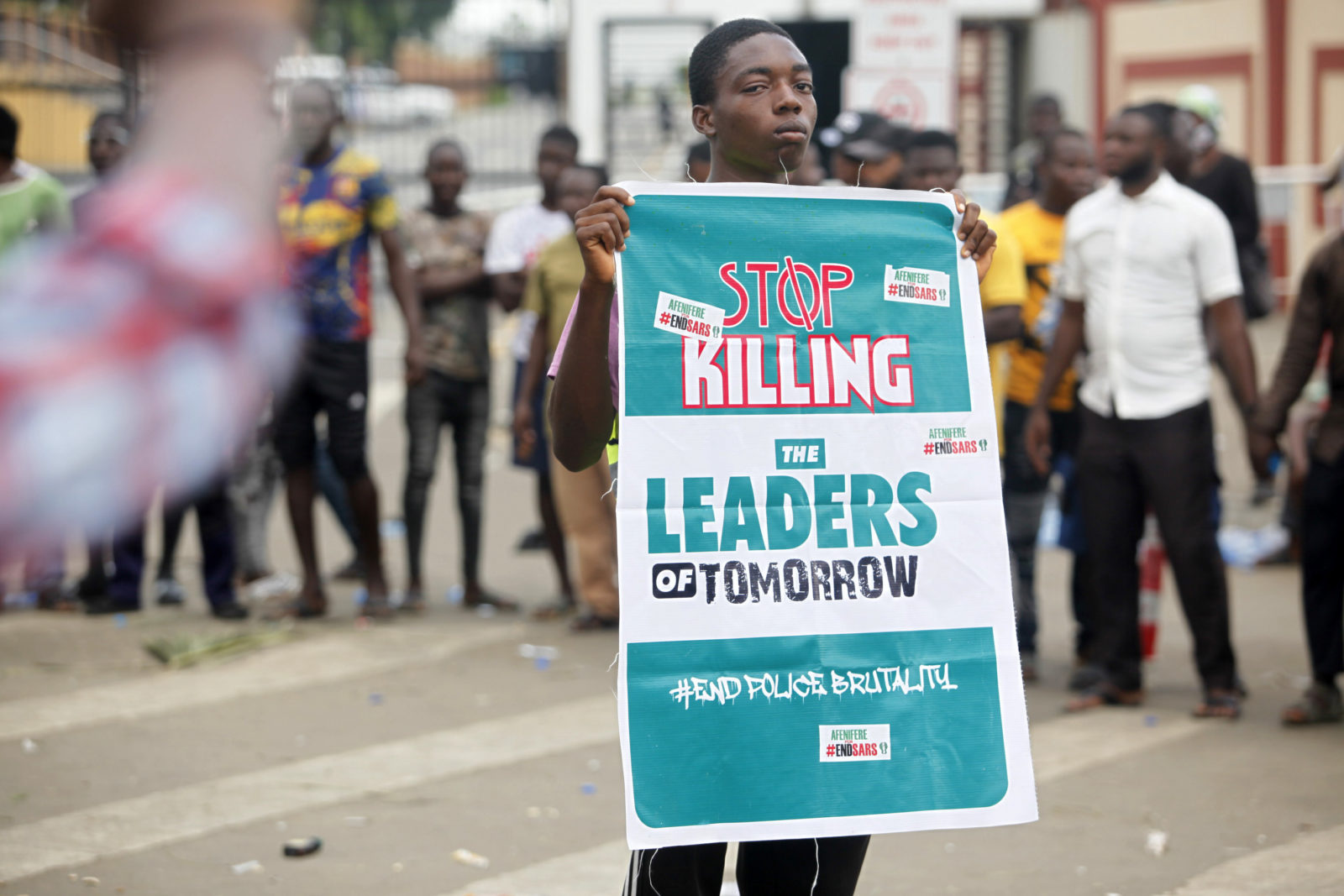 epaselect epa08760291 A boy holds a banner during a protest against the Nigeria rogue police, otherwise know as Special Anti-Robbery Squad (SARS), in Ikeja district of Lagos, Nigeria, 20 October 2020. It has been two weeks since the protests against SARS began and protesters say agitation against police brutality continues as an entry point to addressing other social and political issues such as corruption, official ineptitude to public accountability, and government inefficiency in Nigeria. The Lagos governor has imposed a 24-hour restriction on movement starting at four pm on 20 October in Lagos as protest begins to turn violent. EPA-EFE/AKINTUNDE AKINLEYE

LAGOS, Oct 21 (Reuters) - Lagos was under a round-the-clock curfew on Wednesday enforced by police roadblocks, as smoke rose from a flashpoint area in Nigeria's biggest city where soldiers shot at protesters the previous evening, witnesses said.

The Lagos state governor said 30 people were hurt in the shooting at a toll gate in the Lekki district, a focal point of nearly two weeks of nationwide protests against allegations of systematic police brutality.

Four witnesses said soldiers had fired bullets and at least two people had been shot. Two of the witnesses said the lights were turned off at the gate shortly before the shooting began. One said he saw soldiers remove bodies.

Lagos state Governor Babajide Sanwo-Olu said one person had died at hospital from blunt force trauma to the head, but that it was unclear if he had been a protester.

Amnesty International said it had “received credible but disturbing evidence of excessive use of force occasioning deaths of protesters at Lekki toll gate in Lagos,” and that they were investigating the killings.

Authorities imposed the curfew on Lagos on Tuesday after the governor said the protests had turned violent.

President Muhammadu Buhari, appealing for “understanding and calm”, said on Wednesday he was committed to providing justice for victims of brutality, and that police reforms also demanded by the demonstrators were gathering pace.

His statement, disseminated by his spokesman, did not refer to the shooting at the Lekki toll gate, from where a witness saw smoke rising on Wednesday.

On Wednesday, Police set up roadblocks in Lagos and were not allowing vehicles to pass, although there were a few cars and people walking, two witnesses said.

They said some of the police were armed and wore body armour, and many were in plain clothes. Witnesses also heard the sound of gunfire in the Okota and Ebute Metta areas of mainland Lagos.

‘THE BUCK STOPS AT MY TABLE’

Thousands of Nigerians have demonstrated in protests that initially focused on a police unit, the Special Anti-Robbery Squad (SARS), that rights groups had for years accused of extortion, harassment, torture and murders.

The unit was disbanded on Oct. 11 but the protests have persisted with calls for law enforcement reforms.

Sanwo-Olu tweeted pictures of his hospital visit to victims of what he referred to as the “unfortunate shooting incident” in Lekki.

He said 25 people were being treated for mild to moderate injuries, two were receiving intensive care and three had been discharged.

“I recognise the buck stops at my table and I will work with the FG (federal government) to get to the root of this unfortunate incident and stabilise all security operations to protect the lives of our residents,” said Sanwo-Olu.

In a broadcast, he said incidents of arson and “destruction” had been reported in Lagos on Wednesday morning, and he urged Buhari to intervene in investigating what happened at Lekki.

People who attended Tuesday’s protest there described being shot at by soldiers.

Inyene Akpan, 26, a photographer, said more than 20 soldiers arrived at the toll gate and opened fire. He saw two people being shot.

Witness Akinbosola Ogunsanya said he saw around 10 people being shot, and soldiers removing bodies. Another witness, Chika Dibia, said soldiers hemmed in people as they shot at them.

A Nigerian army spokesman did not respond to requests for comment.

Nigeria sovereign Eurobonds fell more than 2 cents on the dollar on Wednesday in the wake of the shooting. (Reporting by Angela Ukomadu, Alexis Akwagyiram and Libby George in Lagos; editing by John Stonestreet)