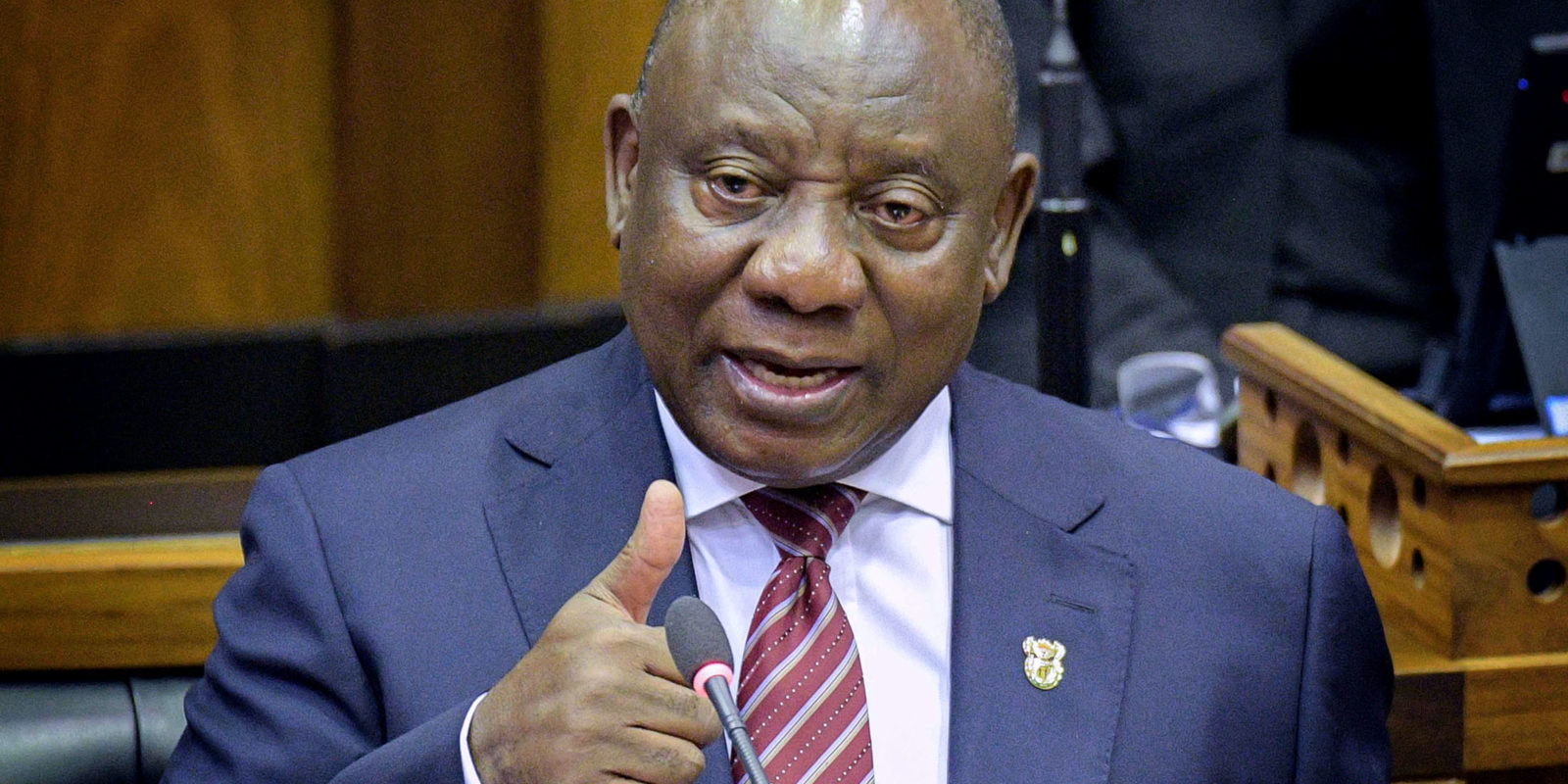 During Wednesday’s almost three-hour parliamentary debate, President Cyril Ramaphosa defended the Economic Reconstruction and Recovery Plan against opposition criticism. It may not be completely new, but it has ‘to work for the people of South Africa’.

For 3o minutes in Parliament on Wednesday, President Cyril Ramaphosa argued why the Economic Reconstruction and Recovery Plan that he presented on 15 October was different to previous plans of this nature.

“It may well sound like we have not come up with anything new. But if you read between the lines… there’s a new determination and this plan is underpinned by the participation of the social partners.”

With immediate actions to provide jobs, build infrastructure and kick-start growth by, for example, the Buy Local manufacturing campaign, the private sector on Wednesday finally got its express recognition.

Growth enhancing measures, such as urgent steps to remove impediments to investment and dealing with the energy crunch, were included precisely to boost private-sector led employment and economic growth – even as public mass-employment programmes remain key.

“[The plan] will induce the private sector and others, pension funds, many others, to invest alongside us [government],” Ramaphosa told the joint sitting of Parliament. “This plan will unleash the capacity of the private sector to build jobs.”

The president called on all parties to set aside their differences.

“Our foremost concern… is to ensure the plan works, not for an administration or any political party. It must work for the people of South Africa,” said Ramaphosa. “I call on all to support this plan and to insist on implementation. I would like to invite Parliament to insist we implement.”

But what underlies Ramaphosa’s reconstruction and recovery plan is the Presidency he heads.

The Presidency’s Project Management Office head, Rudi Dicks, is understood to have relentlessly driven the mass public works programme with its 800,000 job opportunities that is a cornerstone of the plan.

A hint of that is in the glossy brochure prepped to coincide with Ramaphosa’s plan presentation to Parliament on 15 October, “Building a Society that Works”. It outlines a tight timeline from 21 April, when the president announced the R500-billion Covid-19 package, including R100-billion over three years for job creation, followed by the R19.6-billion allocated in the June Covid-19 emergency Budget.

Since then the Presidency’s Project Management Office has pushed the budgetary measures through the National Treasury special process that secured R13.8-billion this financial year. And it achieved the finalisation of what the brochure called, “the rapid design of employment support programmes that can be rolled out within the next six months despite the many implementation constraints that public bodies currently face”.

The mass public employment programme is central – in ANC politicking and in the social compacting that is a cornerstone of the Ramaphosa presidency.

It has been a key demand from labour federation Cosatu, both as alliance partner to the governing ANC and as social partner in the National Economic Development and Labour Council (Nedlac).

Employment programmes linked to infrastructure investment are preferable to the expansion of social grants, as such programmes offer work experience, transfer skills and capabilities and result in the expansion of community services and assets… [and] will increase the social wage for poor communities and facilitate inclusive growth and job creation.

On 13 September, the Nedlac Plan of Action agreed to prioritise employment as one of three crucial areas – particularly regarding the much required structural reforms. It cited “mass public employment programmes for, inter alia, community” alongside anti-corruption in the section on “enabling conditions and supportive policy environment for a new accelerated, inclusive, transformative growth trajectory”.

In early October the Presidential Economic Advisory Council, in its document dated 6 October, and leaked a few days later, was looking at trade-offs in a constrained and flailing economy.

“Employment programmes linked to infrastructure investment are preferable to the expansion of social grants, as such programmes offer work experience, transfer skills and capabilities and result in the expansion of community services and assets… [and] will increase the social wage for poor communities and facilitate inclusive growth and job creation.”

Like the Projects Management Office, this Investment and Infrastructure Office effectively concentrates state power, if not fiscal control, in the Presidency.

But one reason Finance Minister Tito Mboweni is the finance minister is precisely because he has the president’s back. And so the Presidency and National Treasury are collaborating in what Mboweni named Operation Vulindlela, effectively the oversight of implementation of plans and reforms that has the necessary muscle as it reports directly to Ramaphosa.

Operation Vulindlela was one of the ANC underground’s key missions to infiltrate apartheid South Africa before the start of negotiations for a transition to democracy. It’s better known as Operation Vula, involving many who went on to be Cabinet ministers, such as Mac Maharaj and Ronnie Kasrils.

On Wednesday, Tourism Minister Mmamoloko Kubayi-Ngubane provided a few more details about Operation Vulindlela including that it would receive monthly reports, which would then be compiled into a broader report that would go to yet another new Cabinet formation, the National Economic Recovery Council.

Kubayi-Ngubane would know more about the intricacies of getting to the 15 October announcement on the recovery plan as she and Employment and Labour Minister Thulas Nxesi led Nedlac discussions.

But her comments seem to indicate a focus on reports, reporting and executive control. Paperwork in South Africa’s weak and often dysfunctional public administration can cause paralysis.

Kubayi-Ngubane’s debate opening set the scene for the ANC approach to this debate, and its talking points – growth, value chains, service delivery, focused implementation, coordination – followed by individual speakers’ recap of their assigned aspects of the plan.

“We have issued a request for information on nuclear [power]. To test the market,” said Mantashe. He added, in a grim echo from the Zuma era, “We build them at a rate and pace the country can afford.”

DA interim leader John Steenhuisen described the economic recovery plan “a wish-list of worthy intentions. This is a letter to Santa.”

If you let us help you pass these reforms, you can forget about the Aces and the jokers. You won’t need them. You’ll have a winning hand. Let that be your legacy: the president who chose to put his country before his party.

He called on Ramaphosa to replace non-performing ministers – other DA speakers echoed this – and ditch “people who are ideologically incompatible” with economic growth reforms.

“If you let us help you pass these reforms, you can forget about the Aces and the jokers. You won’t need them. You’ll have a winning hand. Let that be your legacy: the president who chose to put his country before his party.”

IFP President Emeritus Mangosuthu Buthelezi called for cooperation as at a time of war, but raised questions over key aspects of the plan, including a forecast growth rate of 3% over 10 years.

“The question, as always, is: Where will the money come from? As a wish list this [plan] is excellent.”

Other opposition parties raised their perennial bugbears, like land. EFF Chief Whip Floyd Shivambu described the economic plan as “underwhelming”, and Ramaphosa as “a sellout” for failing to  include land.

Mantashe dealt with that, saying Shivambu didn’t understand land beyond grabbing it for land invasions, and had failed to recognise that when the plan talked of food security, that meant land.

This intervention left Ramaphosa above the political fray, and able to sound presidential.

“Regardless of where we sit across the political divide, we must find the political courage to unite behind this common vision for our recovery.”