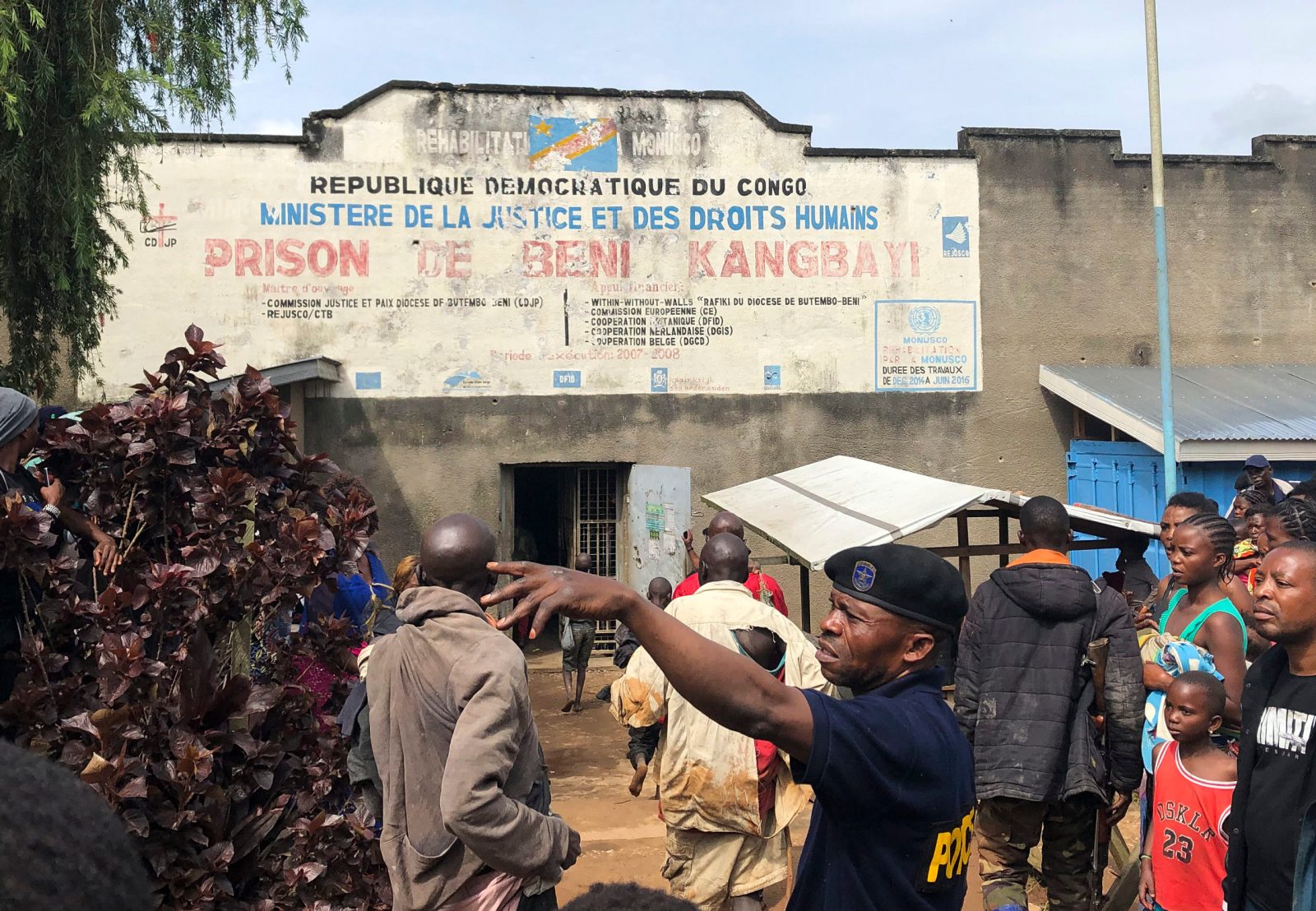 epa08758676 A policeman gestures as Congolese look on at the breached entrance of Kangbayi prison following a prison break in Beni, North Kivu province, Democratic Republic of the Congo, 20 October 2020. Local reports indicate at least 900 prisoners escaped Kangbayi prison in Beni following an attack by Allied Democratic Forces (ADF) a Ugandan armed group. A simultaneous assault on the Kangbayi central prison and on the military camp securing it left only 100 remaining prisoners out of more than 1000 inmates. EPA-EFE/STR

Only 100 out of more than 1,000 inmates remained following the simultaneous assaults on the Kangbayi central prison and the military camp defending it, said the mayor, Modeste Bakwanamaha.

“Unfortunately, the attackers, who came in large numbers, managed to break the door with electrical equipment,” Bakwanamaha told Reuters. “We believe it was the ADF who did this.”

The Allied Democratic Forces (ADF), a Ugandan armed group active in eastern Congo since the 1990s, has killed more than 1,000 civilians since the start of 2019, according to U.N. figures, despite repeated military campaigns aimed at destroying it.

Islamic State said fighters from its so-called Central African Province franchise carried out the attack, according to its AMAQ news agency. The group has claimed responsibility for several suspected ADF attacks in the past.

United Nations experts, however, have found no evidence of a direct connection between the two groups.

Two inmates were shot dead during the raid, which started at around 4:30 a.m., police said on Twitter. Police gave a higher figure for the number of inmates, 1,300, saying many had disappeared.

A similar number of inmates escaped when the jail was attacked in June 2017.

Kangbayi prison holds a variety of militiamen including members of local rebel groups and ADF fighters. Bakwanamaha said there were rumours that ADF fighters in the prison were preparing a break-out in the days preceding the attack.

A year ago the army launched a large-scale counter-insurgency campaign against the ADF. In response, the group abandoned its bases, split into smaller, more mobile groups, and retaliated against civilians. (Reporting by Stanis Bujakera and Erikas Mwisi Kambale; Writing by Hereward Holland Editing by Giles Elgood)