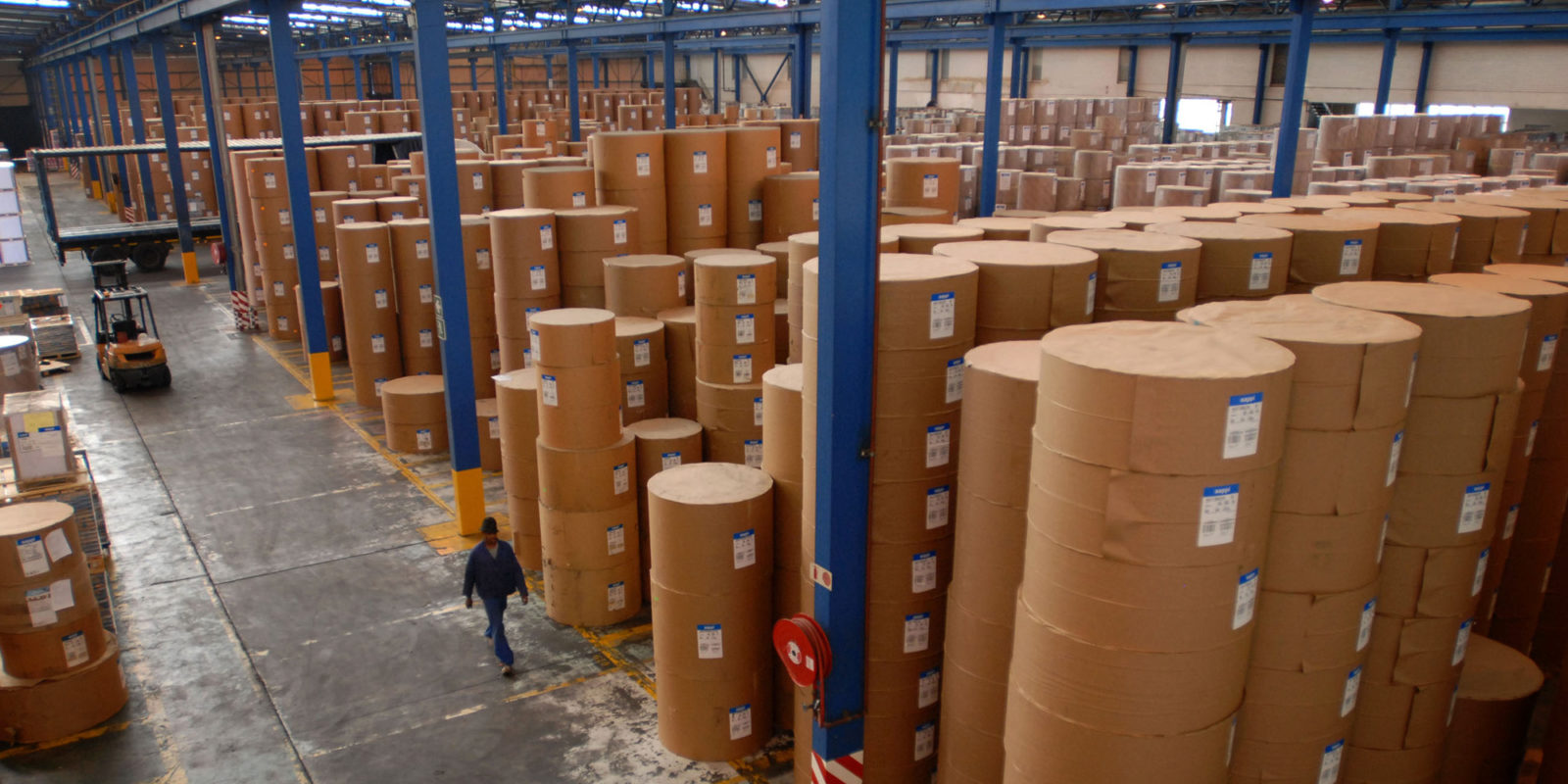 A worker walks between stacks of paper rolls at Goldfields Logistics, a distribution company of Sappi, in Germiston, Johannesburg. (Photo: Naashon Zalk/Bloomberg via Getty Images)

Sappi’s share price was up 18% on 19 October which sparked some interest in a company with a volatile past. It has moved from buckling under debt to shifting strategy from its former paper trail to feeding into a cellulose market which has a significant number of Chinese producers. This has left Sappi with little wiggle room, but wiggling it is.

Sappi is now more exposed to the expanding textile market than the shrinking paper market as a result of its growing exposure to dissolving wood pulp used in cellulose.

Cellulose is mainly used to produce paperboard and paper, but smaller quantities are converted into a wide variety of derivative products such as cellophane and rayon. Conversion of cellulose from energy crops into biofuels such as cellulosic ethanol is also under development as a renewable fuel source.

Analysts say Sappi’s recent share price spike to around 2650c/share falls on the back of the sharp rise in lumber prices worldwide, which has driven up the price of dissolving wood pulp. But also, the global clothing and textile market is forecast to recover, albeit slowly, after Covid-19. There has been further support via increased Covid-fuelled demand for tissue paper and food packaging.

Mish-al Emeran, an investment analyst at Abax Investments, says dissolving wood pulp makes up 44% of Sappi’s earnings before interest, tax, depreciation and amortisation (ebitda) and 60% of operating profit. The dissolving wood pulp price was up $23/ton last week, which is the highest weekly increase in a number of years. The viscose price was also up around 10%, which is leading to a restart of viscose mills and is positive for short-term dissolving wood pulp demand, which all bode well for the company’s share price.

Emeran agrees and says the dissolving wood pulp price is also supported from the supply side as mills across the globe are taking capacity out of the supply chain for routine annual maintenance, which was not possible during the first half of the year due to Covid-19 restrictions. “So supply has been suppressed,” he says.

Inventories are relatively low, and it seems China’s improving demand has surprised the market on the upside, which is further feeding into the higher price of dissolving wood pulp, Emeran says.

This is after the company warned at the beginning of lockdown that it had “received separate notifications of the intention to reduce dissolving pulp purchase volumes from some major customers in relation to their contractual volume commitments in the coming quarter”.

Emeran does, however, add that Sappi’s share price spike comes off a lower base, having been under pressure due to balance sheet concerns.

The share price took a bit of a knock recently when banks agreed on the company extending its debt covenants by another six months or so. Over the past three months, it hit a low point of 2127c/share on 4 September.

Sappi announced the covenant waiver extension via Sens on 7 October.

The company is in a closed period, but in a press release issued at the end of March, Sappi said that its liquidity headroom in the group is strong, with cash deposits in excess of $200-million and two undrawn revolving credit facilities of about $640-million.

However, “In light of the uncertainty regarding future trading conditions and the importance of ensuring we have adequate liquidity for the duration of this period, we have been in negotiations with the consortium of banks that provide Sappi’s European bank facilities that are subject to financial covenants.

One of his longer-term concerns for Sappi relate to the structure of the dissolving wood pulp market, where customers — including a small number of viscose producers — hold the negotiating power, making Sappi more of a price taker than a giver.

“We are pleased to report strong support from our banking group and that the consortium has agreed to suspend covenant measurement in principle for four quarters from June 2020 to March 2021, subject to completing the documentation in this regard. This suspension is subject to normal conditions for this kind of assistance, which only apply during the suspension period, and include no dividend payments, maximum capex spending limits, a minimum liquidity requirement and no M&A activity without prior bank approval,” the press release said.

“That was initially why the share price has been under pressure,” says Emeran.

But with favourable supply/demand fundamentals at play, the share price has bounced back.

“The risk is what will happen to dissolving pulp prices in the first half of next year, when supply comes back on line, and that is open to debate,” says Emeran.

One of his longer-term concerns for Sappi relate to the structure of the dissolving wood pulp market, where customers — including a small number of viscose producers — hold the negotiating power, making Sappi more of a price taker than a giver.

“At this stage, Sappi needs to focus on what they can control, including manage their costs, make sure the production plants run efficiently and get their balance sheet back under control,” says Emeran.

In the press release, Sappi said that “with a primary focus on liquidity and cash flow, we have taken immediate action and implemented various cost-saving measures across our operations, curtailing where possible all non-essential capital expenditure and applying measures to optimise working capital. The declaration by Sappi of force majeure on the Saiccor Mill expansion and upgrade project will delay capital expenditure, and any associated costs as a result of the declaration are not expected to be material.”

According to an investment note dated mid-August and released by the Ninety One Commodity Fund, the investment firm remains bullish on Sappi based on valuation grounds and an improved outlook for dissolving wood pulp prices.

But despite the bright sparks flashing in Sappi’s nearby future, and the share price trading at more than 60% below its estimated fair value, David Shapiro, deputy chairman at Sasfin Securities, does not form part of the fanfare.

He says the share price has traded sideways for more than five years and there is nothing in the market the company trades in that indicates a major growth spurt on the horizon. “The share price has also been highly volatile over the last few months,” he adds.

Taking the last set of financials into consideration, which was the third quarter results for the period ended June 2020 released in July, interest payments are not well covered by earnings, and profit margins (0.06%) were lower than the year before (4.6%). The company’s price/earnings ratio (251.4 times) is also poorly valued against the forestry industry average of 15.2 times.

Sappi will release its Q4 FY20 and full-year financial results for the period to end-September on Thursday 5 November 2020. DM/BM