By Pieter-Louis Myburgh for Scorpio• 20 October 2020 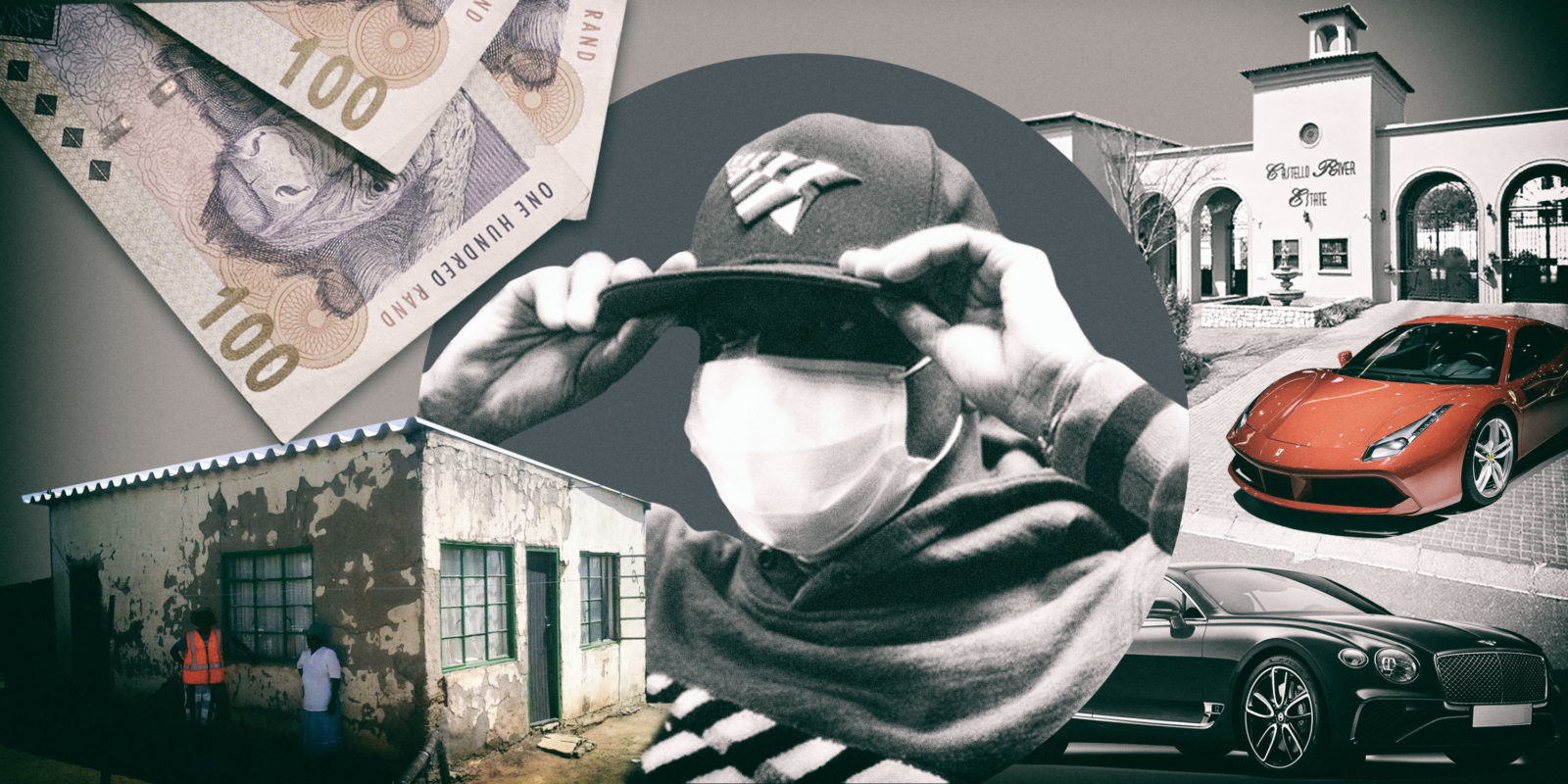 High-flying businessman Edwin Sodi and his late partner, Igo Mpambani, were paid R230m for the Free State’s infamous asbestos audit project, of which they forwarded R44m to a sub-contractor called Mastertrade 232. This money was supposed to cover the project’s costs, but Scorpio’s latest investigation demonstrates how it largely bankrolled an astonishing portfolio of luxury assets instead.

For a band of businessmen who clearly made a habit of treating themselves to grotesquely expensive gifts, the Free State’s now infamous asbestos audit couldn’t have kicked into gear at a better time.

On 22 December 2014, only a few days before Christmas, the province’s department of human settlements (FSHS) transferred R20-million into a joint venture account set up by Edwin Sodi’s Blackhead Consulting and Igo Mpambani’s Diamond Hill Trading 71. This was to be the first of eight payments the joint venture received from the department.

By August 2016, Sodi and Mpambani’s companies had bagged R230-million in taxpayers’ money.

But Blackhead Consulting and Diamond Hill, by all appearances, merely acted as dealmakers and never intended to perform any actual work on the project. The joint venture paid R44-million to their main sub-contractor, a company called Mastertrade 232, to perform the audit. Mastertrade, in turn, appointed its own sub-contractor, the Ori Group, to do the work. 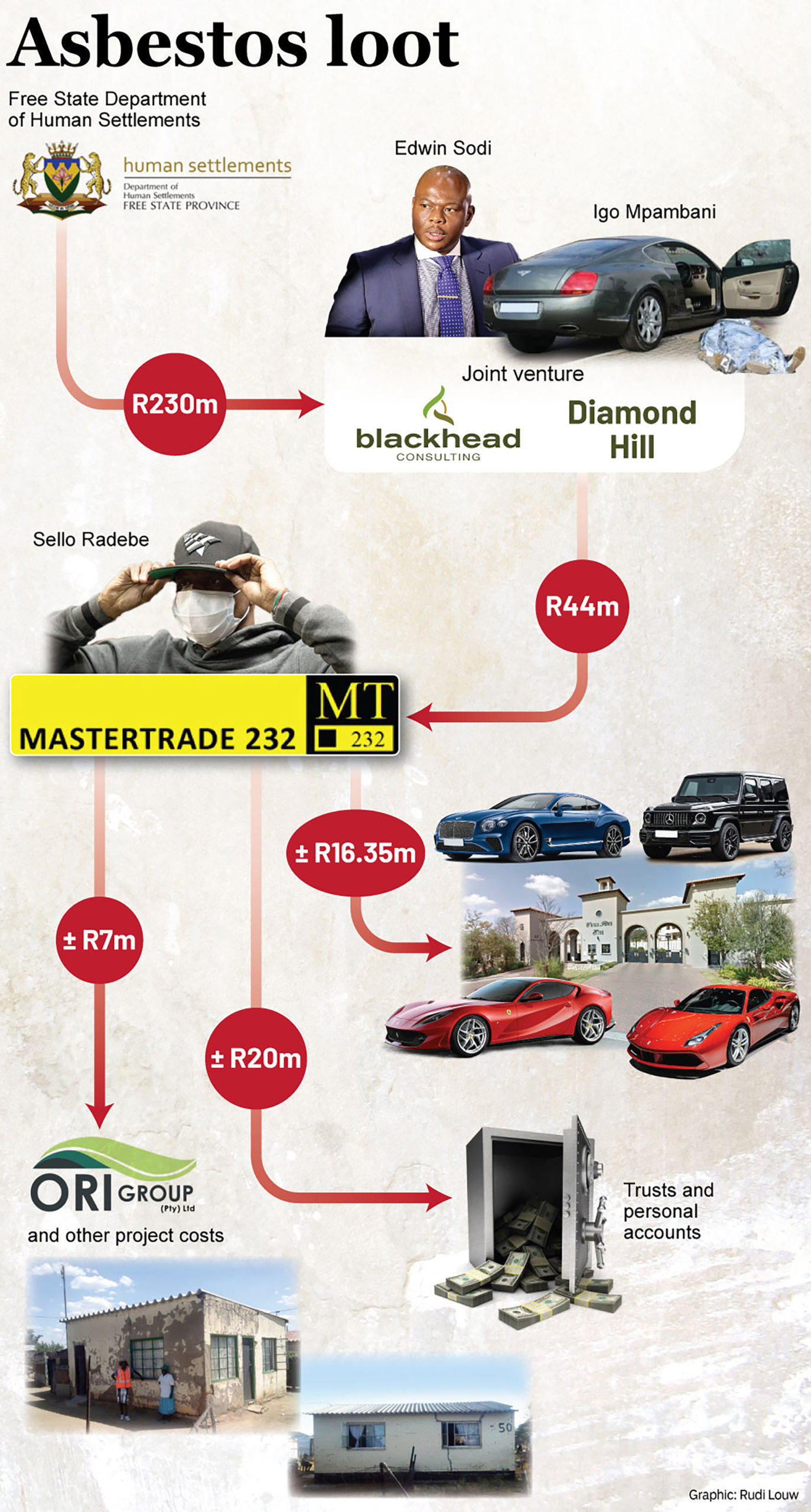 Our latest investigation focuses on the R44-million which Mastertrade received from the Blackhead Consulting/Diamond Hill joint venture.

Had the entire R44-million been utilised for the asbestos audit, taxpayers would have had good cause to feel aggrieved. If this were the case, only about 20% of the R230-million would have been used for its intended purpose.

However, our investigation shows the actual outcome was far worse.

Of the R44-million Mastertrade received from Sodi and Mpambani’s joint venture, it paid only about R7-million to the Ori Group and towards other projects costs. In other words, only 3% of the R230-million the FSHS splurged on the project was used for the audit.

But unlike Sodi and some of the other accused, very few of Radebe’s assets have been seized.

So far, the state has only grabbed a property he owns in Phuthaditjhaba, along with a Bentley Continental GT. This is according to a schedule of seized assets.

Scorpio’s investigation reveals that Radebe used millions of rands directly linked to the asbestos audit to accumulate a fleet of luxury cars and a house in an upmarket security estate in Johannesburg. He also flushed a large chunk of this money into trusts and other accounts linked to him.

We made several attempts to contact Radebe for comment, but his cellphones appear to be switched off. He did not respond to WhatsApp messages either. Daily Maverick respects Radebe’s right of reply. Should he choose to comment, we will publish his responses in full.

Apart from confirming that the asbestos ‘looters’ reserved a negligibly small portion of the money for the project, this investigation again underpins the callousness at the heart of corrupt government contracts – while Radebe, Sodi and Mpambani bought Ferraris, Bentleys and upmarket properties with their asbestos riches, thousands of poor people in the Free State remain exposed to dangerous materials that are yet to be removed from their homes.

The first tranche of money from the FSHS, totalling R20-million, landed in the Blackhead Consulting/Diamond Hill joint venture account on 22 December 2014. A day later, the joint venture paid R13.2-million to Radebe’s Mastertrade 232.

Radebe had already paid R200,000 to Ori Group the day before. However, judging by the financial records we analysed, he had been waiting for the big payment from Sodi and Mpambani’s joint venture before he began distributing larger amounts from his company’s account.

Over the course of roughly a week, Mastertrade made three further payments to Ori Group. In all, Mastertrade paid Ori Group R1.5-million during this timeframe.

Ori Group was tasked to perform the actual audit, which included paying the field workers who physically visited Free State townships to identify houses built with asbestos materials, among other tasks and expenses.

This R1.5-million for costs related to the project, however, would be dwarfed by the spending spree for luxury assets Radebe embarked on shortly after the FSHS released the first round of asbestos money. 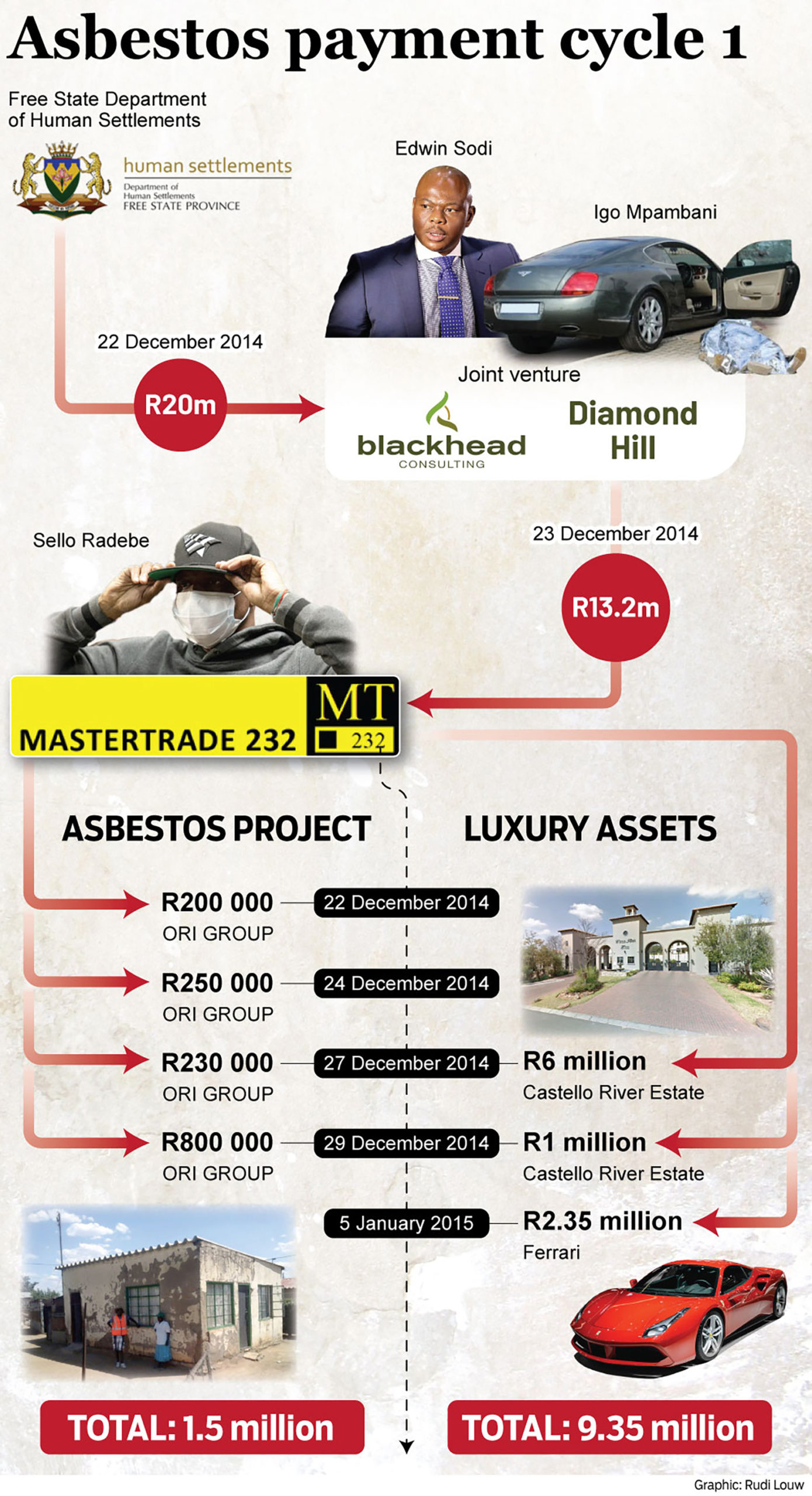 Two days after Christmas, and less than a week after Mastertrade had received the R13.2-million from Sodi and Mpambani’s joint venture, Radebe drained R6-million from his company’s account. Scorpio managed to confirm that this money was utilised to purchase a house in the Castello River Estate, a small, upmarket residential complex on the banks of the Jukskei River north of Johannesburg.

On 29 December 2014, Mastertrade pumped a further R1-million into the transfer attorney’s account, followed by a final payment of R1-million in March 2015. The latter payment was also made right after the FSHS had transferred a large amount of money into the Blackhead Consulting/Diamond Hill joint venture account, and after the joint venture had subsequently forwarded a portion of the money to Radebe’s Mastertrade 232.

In other words, Mastertrade had paid altogether R8-million towards buying the property, which would have included transfer fees and related costs. This entire amount was financed with money from the Free State provincial government’s coffers that came to Mastertrade through the Blackhead Consulting/Diamond Hill joint venture.

Deeds office and trust records shed further light on the property deal. The house was sold to a trust, the Villa Castello Residence Trust, for R7.6-million. The trust, which lists Radebe as a trustee, was registered in January 2015. This, along with the trust’s name, strongly suggests that Radebe had established the trust for the specific purpose of taking ownership of the property.

On 5 January 2015, with Mastertrade’s account still flush with asbestos audit money, the company paid R2.35-million to a Ferrari dealership in Gauteng.

This was the second time Radebe bought an Italian supercar with his share of the asbestos deal.

A few months before, in November 2014, Sodi had transferred R4-million to Mastertrade, presumably as an initial fee for getting the audit project going.

Mastertrade subsequently made relatively small payments to the sub-subcontractor, Ori Group, but the company’s single biggest expense during this period was a R1.5-million payment to the above-mentioned Ferrari dealership.

In other words, by early January 2015, Radebe had become the proud owner of two shiny Ferraris, all courtesy of the Free State’s asbestos audit. Using some of the funds paid to Mastertrade 232, he had forked out R1.5-million for the first Ferrari and R2.35-million for the second.

Scorpio determined that one of the Ferraris was registered to another of Radebe’s trusts, namely the SAB Family Trust. Like the Villa Castello Residence Trust, this trust had also been registered shortly after the FSHS started making its first payments for the asbestos audit. This raises suspicions that Radebe may have established a series of trusts to shelter assets purchased with his asbestos riches.

The Ferrari splurge had evidently only whetted Radebe’s appetite for expensive cars.

In late March 2015, the FSHS transferred R25-million, the third instalment of the asbestos ‘loot’, to the Blackhead Consulting/Diamond Hill joint venture.

Again, Mastertrade forwarded comparatively small portions of this money to the Ori Group for the audit project. But paying his subcontractor was evidently not the only issue that occupied Radebe’s mind during this time.

Only a day after Mastertrade had received the R10-million, the company transferred R2-million to another car dealership.

We were able to confirm that the payment was for a Mercedes Benz G63 AMG, a vehicle so ‘horrendously expensive’ that one needed a ‘rock star’s bank account’ to buy one, according to one car reviewer.

It was also from this third instalment from the FSHS, and specifically from the subsequent money Mastertrade received from the Blackhead Consulting/Diamond Hill joint venture, that Radebe was able to make the final payment of R1-million towards his new house in the Castello River Estate.

The final addition to Radebe’s fleet of luxury vehicles came his way in August 2015, after the FSHS had paid nearly R37-million to Sodi and Mpambani’s joint venture. This was the fifth instalment from the FSHS to the joint venture.

On 11 August 2015, shortly after the Blackhead Consulting/Diamond Hill joint venture had received this money, the joint venture again passed on nearly R10-million to Mastertrade 232.

Mere hours after receiving the payment, Mastertrade channeled R2-million to a car dealership for a Bentley Continental GT.

This time, Radebe registered the vehicle in his own name. This is the same Bentley listed on the schedule of assets for the asbestos case.

Of the four luxury cars and the upmarket property Radebe had purchased with his slice of the asbestos ‘loot’, the state has therefore so far only seized the Bentley.

Between November 2014 and January 2016, Mastertrade 232 received R44-million of the R230-million that the FSHS had paid to the Blackhead Consulting/Diamond Hill joint venture.

Radebe evidently spent only a negligible portion of this money on the project itself.

Much of the remaining funds was spirited away to trusts and other accounts linked to him.

What’s more, a significant portion of the money bankrolled a life of obscene luxury Radebe enjoyed at the cost of poor Free State residents who remain exposed to dangerous asbestos materials. DM