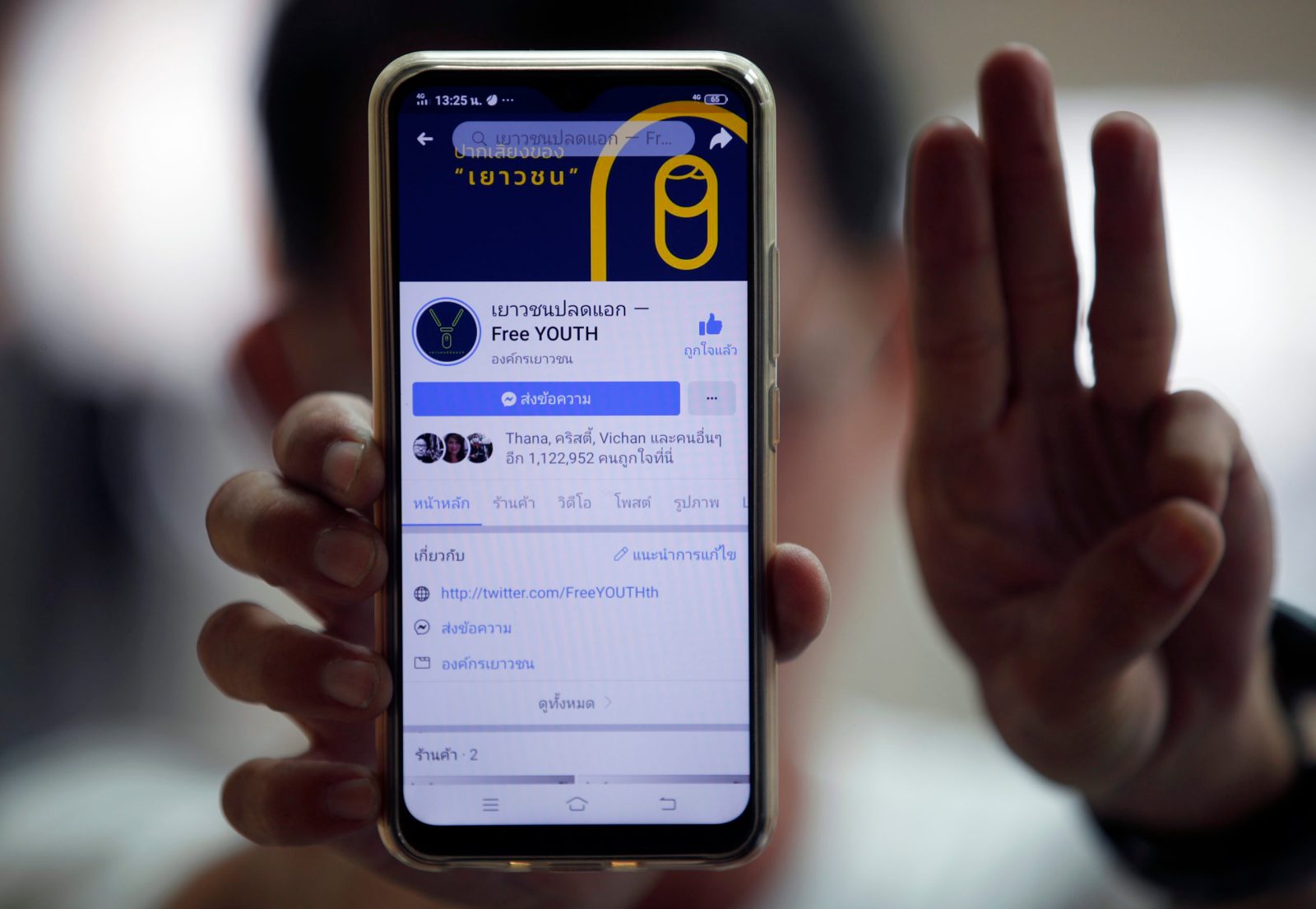 epa08756734 A person poses with a phone displaying Thai media web page showing the Royal Gazette of the government, who is ordering the ban media under the emergency decree, in Bangkok, Thailand, 19 October 2020. The Thai government is demanding police shut down four local online media platforms and a Facebook page, run by pro-democracy protesters, for allegedly publishing content harmful to national security. EPA-EFE/RUNGROJ YONGRIT

BANGKOK, Oct 19 (Reuters) - Thai police said on Monday they had ordered an investigation of four news outlets under emergency measures introduced last week and imposed curbs on messaging app Telegram to try to stop three months of protests against the government and monarchy.

The announcement prompted anger from media groups and accusations of an attack on press freedom by the government of Prime Minister Prayuth Chan-ocha, the former junta leader the protesters are seeking to drive from office.

According to a police document dated Oct. 16, investigations have been ordered into content from four media outlets as well as the Facebook page of a protest group.

“We received information from intelligence units concerned that parts of the content and distorted information have been used and disseminated to cause confusion and instigate causing unrest to society,” police spokesman Kissana Phathanacharoen told a news conference.

He said it was for Thailand’s broadcast regulator and digital ministry to investigate and take appropriate action, adding that there was no plan to curb press freedom.

Putchapong Nodthaisong, a spokesman for the digital ministry, said it had requested court orders to take down content by the four media outlets and the Facebook page of the protest group Free Youth, among more than 300,000 pieces of content it said violated Thai laws over the last week.

The Manushya Foundation, an independent group which campaigns for online freedom, called the measures an attempt to silence free media.

“Since the ban on protests did not work, the military-backed government hopes to create fear of telling the truth,” its director Emilie Palamy Pradichit said. “We urge free media to resist.”

The government ordered a ban on news and online information that could affect national security last Thursday as it also banned political gatherings of more than five people in the face of the growing challenge.

Police chief Suwat Jangyodsuk also told reporters on Monday that he had ordered the digital ministry to restrict Free Youth’s group on Telegram, a messaging application that protesters used to coordinate in recent days.

Putchapong, the ministry’s spokesman, declined to verify another document apparently signed by him, that asked internet service providers and mobile operators to “suspend Telegram” completely.

Protests have taken place every day since they were banned on Thursday, and Sunday’s demonstrations drew tens of thousands of people in Bangkok and across the country. Police gave a figure of 20,000 protesters in the capital.

Protesters planned to gather again at three locations in Bangkok in late afternoon on Monday.

“We will prosecute everyone,” deputy Bangkok police chief Piya Tawichai said, adding that 74 protesters had been arrested since Oct. 13.

Protesters seek the removal of Prime Minister Prayuth, accusing him of engineering last year’s election to keep hold of power he first seized in a 2014 coup. He says the election was fair.

The protesters have also grown more vocal in demanding reforms to the monarchy to reduce the powers of King Maha Vajiralongkorn. The Royal Palace has made no comment on the protests or protesters’ demands.

Prayuth has said he will not quit. Speaking at Government House on Monday, Prayuth said he supported a proposal for a special parliament session to discuss the situation. His supporters have a majority in parliament.

“We are just asking people not to do wrong and destroy the government and people’s property,” he said. “What the government needs to do is to protect the monarchy.” (Writing by Matthew Tostevin; Editing by Michael Perry & Simon Cameron-Moore)