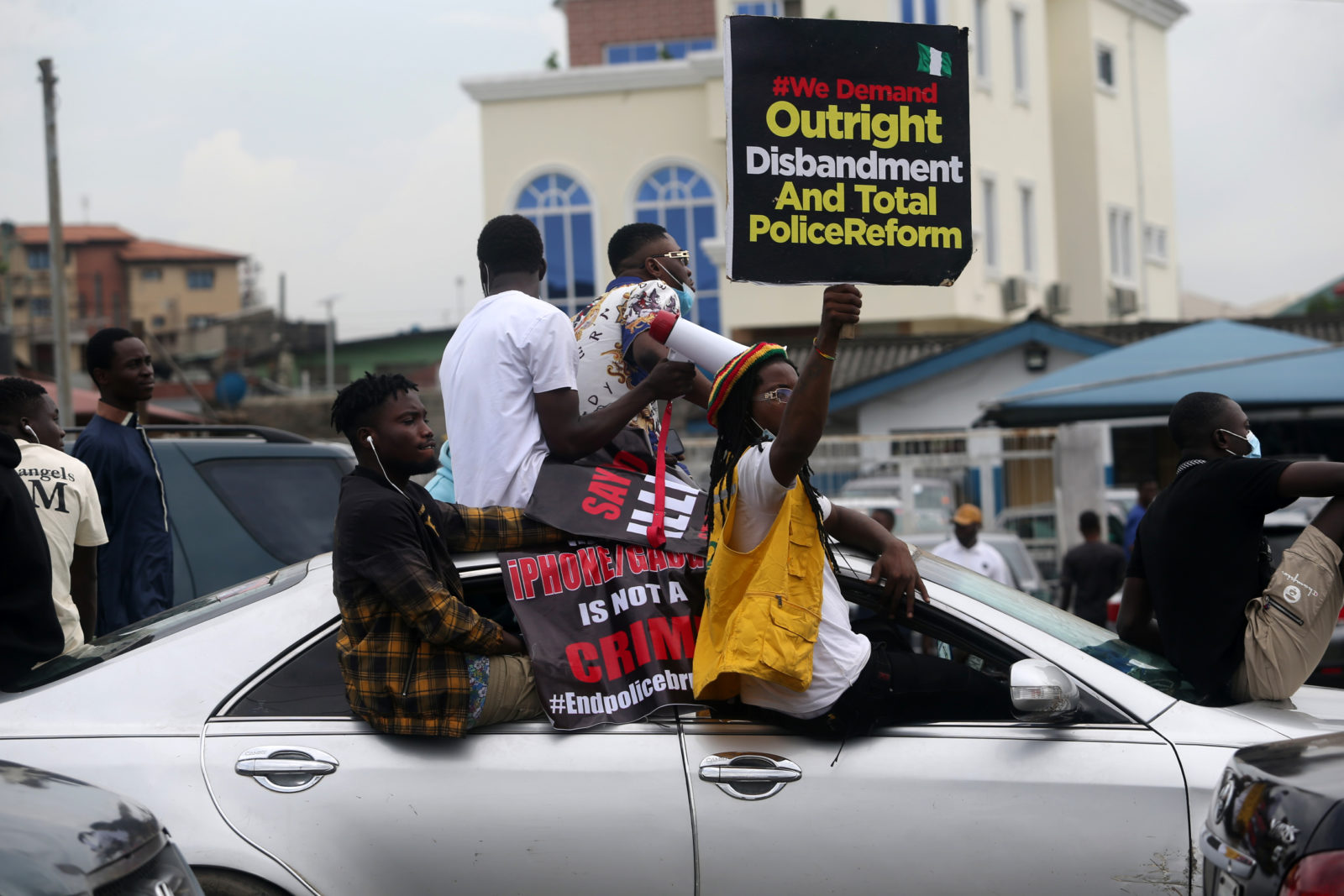 Protesters sit on a vehicle as they banners during a protest against the Nigeria rogue police, otherwise know as Special Anti-Robbery Squad (SARS), in Ikeja district of Lagos, Nigeria, 09 October 2020. In recent times, large section of the Nigerian population, including unemployed youth, has been calling for the dissolution of the police Special Anti-Robbery Squad as they accusing them for notorious killings, harassments, and maiming of innocent citizens in the bid to quash internet scammers. (EPA-EFE/AKINTUNDE AKINLEYE)

LAGOS/YENAGOA, Oct 18 (Reuters) - The International Committee of the Red Cross (ICRC) will help train Nigeria's new tactical force as thousands nationwide continued to march against police brutality and in demand of further reforms, Nigeria's police inspector general said in a statement on Sunday.

Protests began roughly two weeks ago demanding the dissolution of the Special Anti-Robbery Squad (SARS), which was accused by Nigerians and groups such as Amnesty International of extortion, brutality and torture.

The police force has repeatedly denied the accusations against SARS, though it said earlier this month that “unruly and unprofessional” officers had been arrested and were facing disciplinary actions

The new unit, the Special Weapons and Tactics (SWAT) team, was created to “fill the gaps” left when police disbanded SARS on Oct. 11.

SWAT training will begin on Monday in partnership with the ICRC and “other development partners”, Mohammed Adamu, inspector general of police, said in a statement. Former SARS officers are not eligible to join SWAT, the statement said.

The ICRC did not immediately respond to a request for comment. Police said the ICRC would join training on humanitarian laws, police conduct in conflict, and human rights in the use of force, arrest and detention.

Senate President Ahmad Lawan, after meeting with President Muhammadu Buhari on Sunday, called on protesters to stand down in light of the steps leaders had taken.

But protesters are demanding further protections against the police, including independent oversight and psychological evaluation of officers.

Hundreds joined a prayer march on Saturday in Port Harcourt, and peaceful marches and demonstrations continued in Lagos, Abuja, Warri, Enugu and Makurdi. Supporters launched an online radio station to bolster the movement.

Most demonstrations are now peaceful, after authorities barred police from using force against protesters.

But at least two were killed around demonstrations on Saturday in Osogbo in southwestern Osun state, a spokesman for Governor Gboyega Oyetola told Reuters. The spokesman said an angry mob had attacked Oyetola’s convoy, and that one person was killed before he arrived and the second after he had left. (Reporting By Libby George in Lagos, Tife Owolabi in Yenagoa, Anamesere Igboeroteonwu in Onitsha and Paul Carsten in Abuja; Editing by Diane Craft)

Strauss and co
Save 3 mins