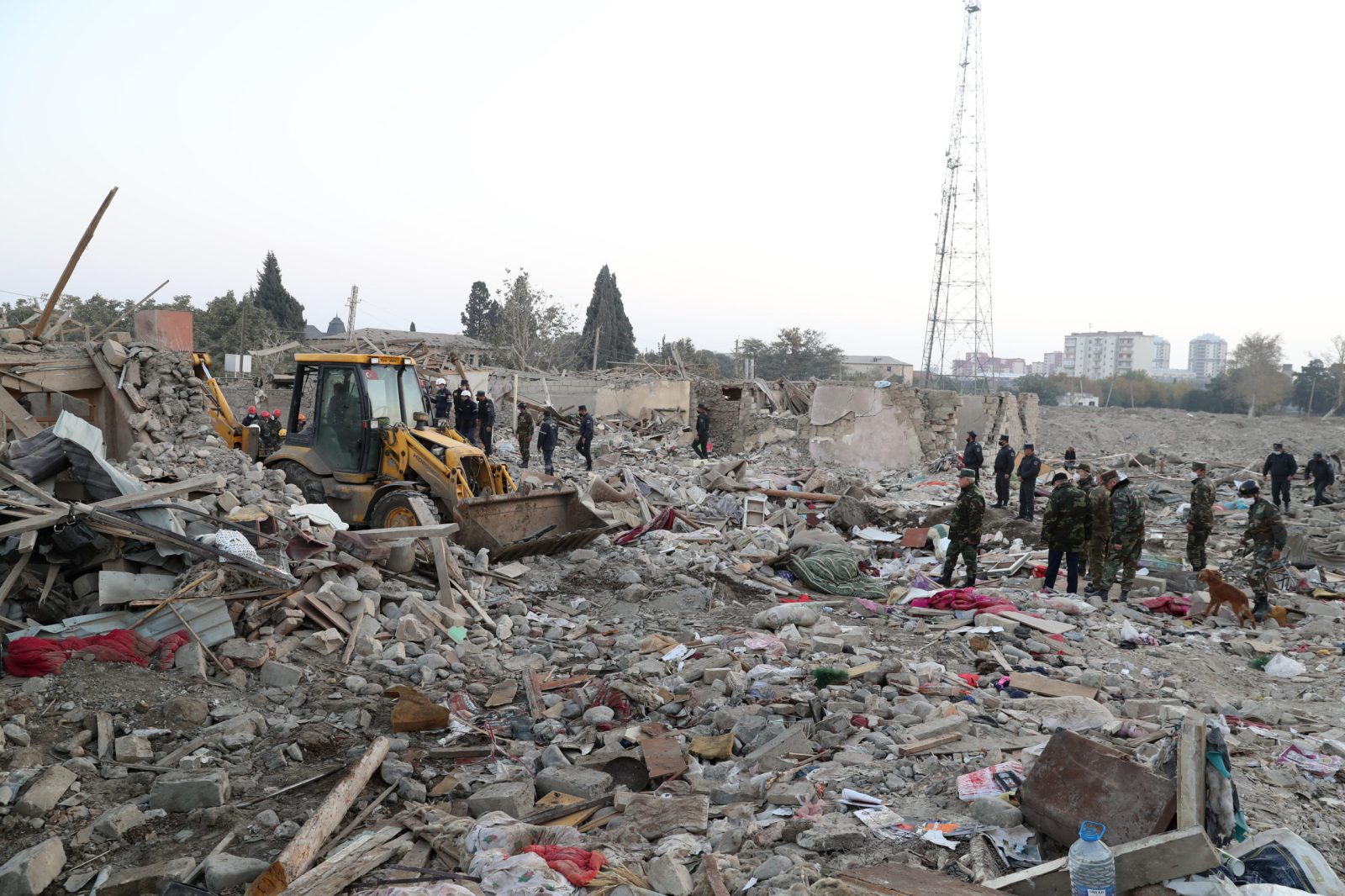 epa08751901 Azerbaijan rescuers work on the devastated houses allegedly damaged by recent shelling in Ganja, Azerbaijan, 17 October 2020. Armed clashes erupted on 27 September 2020 in the simmering territorial conflict between Azerbaijan and Armenia over the Nagorno-Karabakh territory along the contact line of the self-proclaimed Nagorno-Karabakh Republic (also known as Artsakh). EPA-EFE/AZIZ KARIMOV

BAKU/YEREVAN, Oct 19 (Reuters) - A new ceasefire in the mountain enclave of Nagorno-Karabakh appeared to be in jeopardy on Monday, with ethnic Armenian forces and Azerbaijan accusing each other of renewed shelling.

The ceasefire was agreed on Saturday after a deal brokered by Russia a week earlier failed to halt the worst fighting in the South Caucasus since the 1990s. More than 1,000 people have been killed since fighting began on Sept. 27.

The failure to halt the fighting has raised fears of a humanitarian crisis and put new strains on ties between Turkey, which strongly backs Azerbaijan, and its allies in NATO, which want the fighting to stop.

Russia, which has a defence pact with Armenia, could also be at risk of being sucked into a regional war.

Officials in Nagorno-Karabakh, a breakaway enclave of Azerbaijan that is populated and controlled by ethnic Armenians, said Azeri forces were shelling their positions in northern and southern areas of the line of contact that divides them.

The Azeri defence ministry said Armenian forces had shelled its positions in the Garanboy, Terter and Aghdam regions of Azerbaijan overnight and the Agjebedin region was being shelled on Monday morning.

The reports could not immediately be verified.

A ceasefire brokered in Moscow earlier this month was aimed at letting the sides swap detainees and bodies of those killed in the clashes, but it had little impact on the fighting around the enclave.

Shelling has also hit areas inside deep inside Azerbaijan, Azeri authorities say, increasing concerns about the security of pipelines that carry Azeri natural gas and oil to world markets. Armenia denies this.

The new ceasefire was announced on Saturday after Russian Foreign Minister Sergei Lavrov talked to his Armenian and Azeri counterparts by telephone and called on sides to observe the truce that he mediated a week ago.

Russia, France and the United States jointly chair a body called the Minsk Group, which has attempted to help resolve the conflict under the umbrella of the Organization for Security and Co-operation in Europe (OSCE).

Baku said on Saturday that 60 Azeri civilians had been killed and 270 wounded since the fighting flared on Sept. 27. It has not disclosed its military casualties.

Nagorno-Karabakh says 710 of its military personnel have been killed, and 36 civilians. (Additonal reporting by Margarita Antidze Writing by Timothy Heritage Editing by Peter Graff)