A dystopian template for India’s future 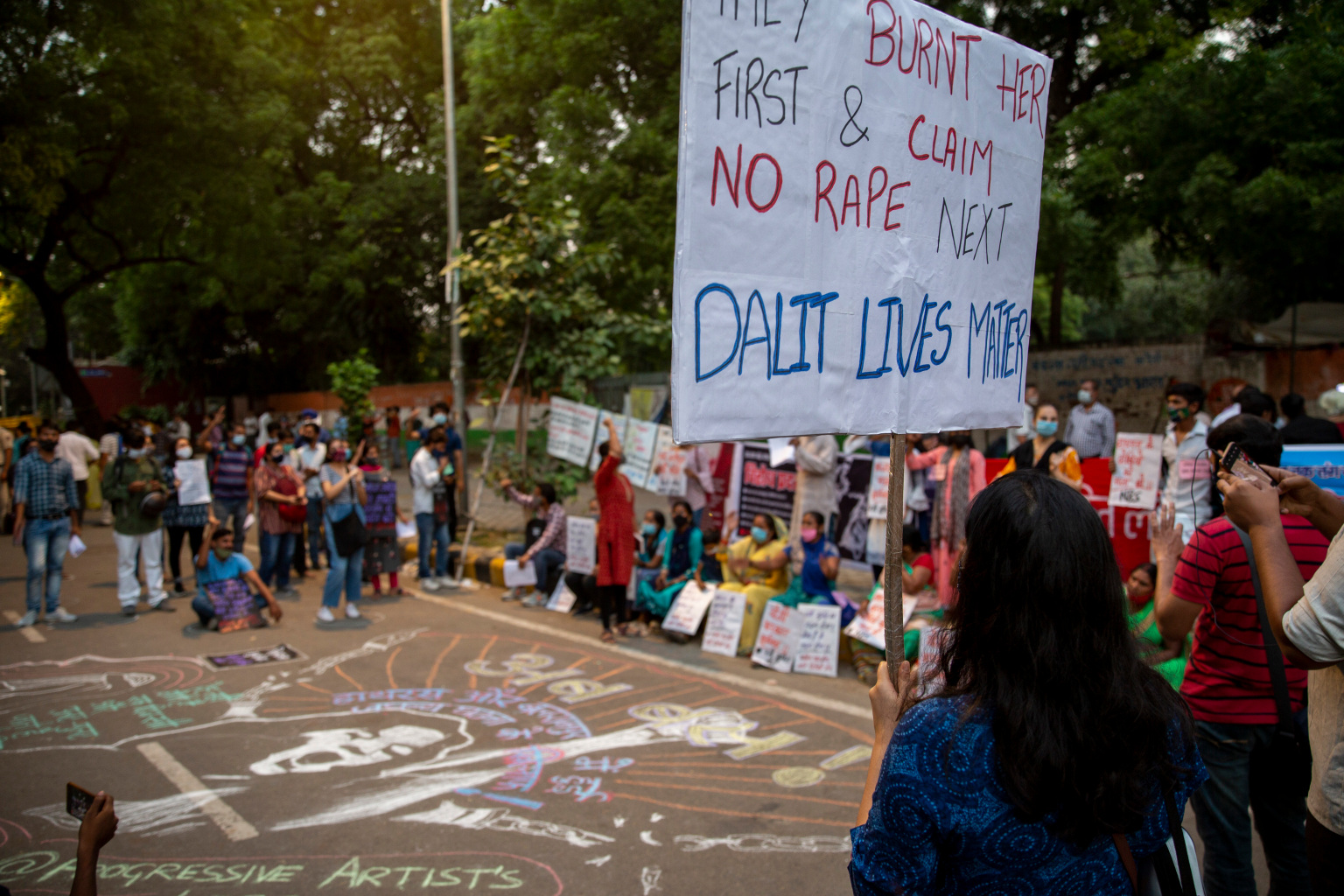 An Indian woman holds a placard while participating in a protest condemning the alleged gang rape and killing of a Dalit woman, in New Delhi, India, Sunday, Oct. 4, 2020. Protestors have been demanding the dismissal of the government of a northern Indian state where the 19-year-old woman from the country's lowest caste was allegedly gang raped and later died in a hospital. Dalits, formerly known as "untouchables" and at the bottom of India's Hindu caste hierarchy, are victims of thousands of attacks each year. According to human rights organizations, Dalit women are particularly vulnerable to caste-based discrimination and sexual violence. (AP Photo/Altaf Qadri)

Murders, kidnapping, rape, police atrocities, sectarian violence, lynch mobs on the prowl. Welcome to a typical day in the life of Uttar Pradesh, India’s most populous, lawless and politically important province, control over which holds the key to power nationally.

India’s Uttar Pradesh (UP) province was in the headlines recently for yet another heinous crime – the gang rape and murder of a 19-year-old woman in a village just 180km from the Indian capital, New Delhi.

In a declaration to the police before she died, the girl – who belonged to an “untouchable” Dalit family – alleged she had been sexually assaulted by four youths from the “upper caste” Thakur community. They also cut her tongue and left her with a broken spine, injuries which resulted in her death at a hospital in Delhi where she had been brought for treatment.

What followed was worse, as the UP police made off with her body, took it back to her village and burnt it in the middle of the night without allowing even her family members to be present. Police officials claimed this was done to “avoid disturbances” due to the social tensions provoked by the brutal killing.

The reason for the hasty and secretive disposal of the body became clear later as senior policemen also claimed that there was no evidence that the Dalit girl had been raped. Representatives of the Thakur caste went on to allege that the girl’s own family was involved in her murder as part of an “honour killing”, as they were upset at her having an affair with one of the accused.

The attempt at covering up the crime and protecting the Thakur boys went into even higher gear as the Chief Minister of UP, Ajay Mohan Bisht, claimed there was an “international conspiracy” to use the woman’s death to spark caste and religious violence in the province. Members of opposition parties and civil society who tried to meet the woman’s family were blocked and even beaten up by police, with a Muslim journalist from the southern state of Kerala arrested under draconian anti-terrorist laws.

Bisht, who is also called Yogi Adityanath, is a controversial Hindu monk turned politician, representing the extreme right wing of the Bharatiya Janata Party (BJP), that is in power both nationally and in UP. Campaigning on the theme of “restoring Hindu pride”, for the last several decades, the BJP has ridden to political power with the promise of turning the Republic of India into a theological Hindu Rashtra (Hindu Nation) and establishing  “Ram Rajya” – a mythical time when peace and prosperity prevailed under the rule of the Hindu deity Lord Ram.

The Bisht regime, in power since early 2017, has openly persecuted Muslims, and has shown little respect for secular principles enshrined in the Indian Constitution and minimum respect for the rule of law. Muslims have been lynched by Hindu mobs, driven out of their homes, arrested on cooked up charges and publicly abused by BJP politicians – all with a view to consolidating the support of Hindu voters using raw hatred as a mobilising tool.

Hindus are an overwhelming majority of UP’s population of nearly 200 million but are divided along caste lines. Dalits, who are relegated to the bottom of the Hindu caste hierarchy, account for roughly 20% of the population, while intermediate castes form around 40%, with “upper caste” Thakurs, Brahmins and Banias forming another 20%. Muslims, the largest religious minority in the province, make up the remaining 20%.

In practice, the claim of “Hindu rule” translates into open domination of every sphere of life by “upper caste” Hindus, also known as “savarnas” (which literally means “of good colour”), with everyone else relegated to the status of second-class citizens, particularly Dalits and Muslims. Even among the upper castes themselves, Bisht has been accused of favouring only members of his own Thakur caste in political and administrative affairs, granting them immunity from prosecution for any crimes they commit.

Nowhere in India is the politics of caste as openly flaunted and evident as in UP, which is located in the middle of India’s extremely fertile Gangetic Plain and has been home to large populations, flourishing trade and prosperous kingdoms for millennia. Though Buddhism and Jainism – religions that were opposed to the caste system – also flourished for long here, UP is associated across India with the Hindu holy towns of Varanasi, Mathura and Ayodhya and the river Ganges itself, that is worshipped by most Hindus.

Since India’s independence from British rule, the politics of UP has dominated the country due to the simple fact that it has 80 out of 543 seats in the Indian Parliament, with a win here ensuring power in New Delhi too. Nine out of 14 Indian prime ministers, including the current incumbent, Narendra Modi, have been elected as MPs from constituencies in UP.

Not surprisingly, UP’s political clout has spawned hundreds of power brokers manipulating public sentiment on emotive issues such as caste and religion in order to harness them for electoral purposes. Political leaders and parties at state and national level have also cynically promoted an exaggerated sense of UP being the “most important” part of India, without which the rest of the country would fall apart.

In reality what has been happening since Independence is that UP has fallen behind the rest of India in almost all indices, whether economic or social. All its political influence has not translated into economic or social benefits for the majority of the population. UP has the largest number of poor people in the country – more than 60 million – and per capita income is half of the national average.

The bulk of UP’s population depends on agriculture for income, with little urban and industrial development or provision of basic energy and transport infrastructure. UP also sends the largest number of low-wage migrant workers to other parts of India and abroad and has the largest number of young men joining the Indian army and paramilitary forces – a sign of unemployment more than patriotism.

UP also has some of the worst development indicators in India, including infant and maternal mortality and access to sanitation and safe drinking water. Crime and social conflict along caste and religious sectarian lines are rampant, with the state’s own poorly disciplined police forces notorious for their trigger-happy and brutal nature.

While the BJP is not the only political party to have used UP as a doormat to power in Delhi, what demarcates it from its rivals is its sheer contempt for all the institutions and values of India’s founding fathers like Mahatma Gandhi, Jawaharlal Nehru and Dr BR Ambedkar. The BJP and the Rashtriya Swayamsevak Sangh (RSS), which is its ideological parent body, is accused of not believing in the sanctity of the Indian Constitution, its values of secularism, the need to protect fundamental rights of citizens or in democratic processes, and of wanting to establish a quasi-fascist rule across the country.

For Hindu extremists, Uttar Pradesh is the holy land where their icon Lord Ram was born, and using its sheer size and electoral clout is the key to establishing Hindu rule over India. In practice, what this means is using the mix of religion, caste, the degrading of institutions and sheer criminality forged in UP over the years as a political template to be imposed on the rest of India.

Reducing all of India itself into an extension of UP is likely to destroy the country, not just as a modern republic but even as one united country. The great irony of the “Hindu Rashtra” may be that whenever it comes into being will also be the moment of India’s dismemberment. DM/MC

This is the third in an ongoing series of articles about the crisis of democracy and the rise of fascism in India. Satya Sagar has been a journalist working in the print, television and online media for the last three and half decades with experience of reporting in India and South East Asia. He has also been active on public health and human rights issues in India over the last two decades. He is currently an associate editor with www.countercurrents.org.