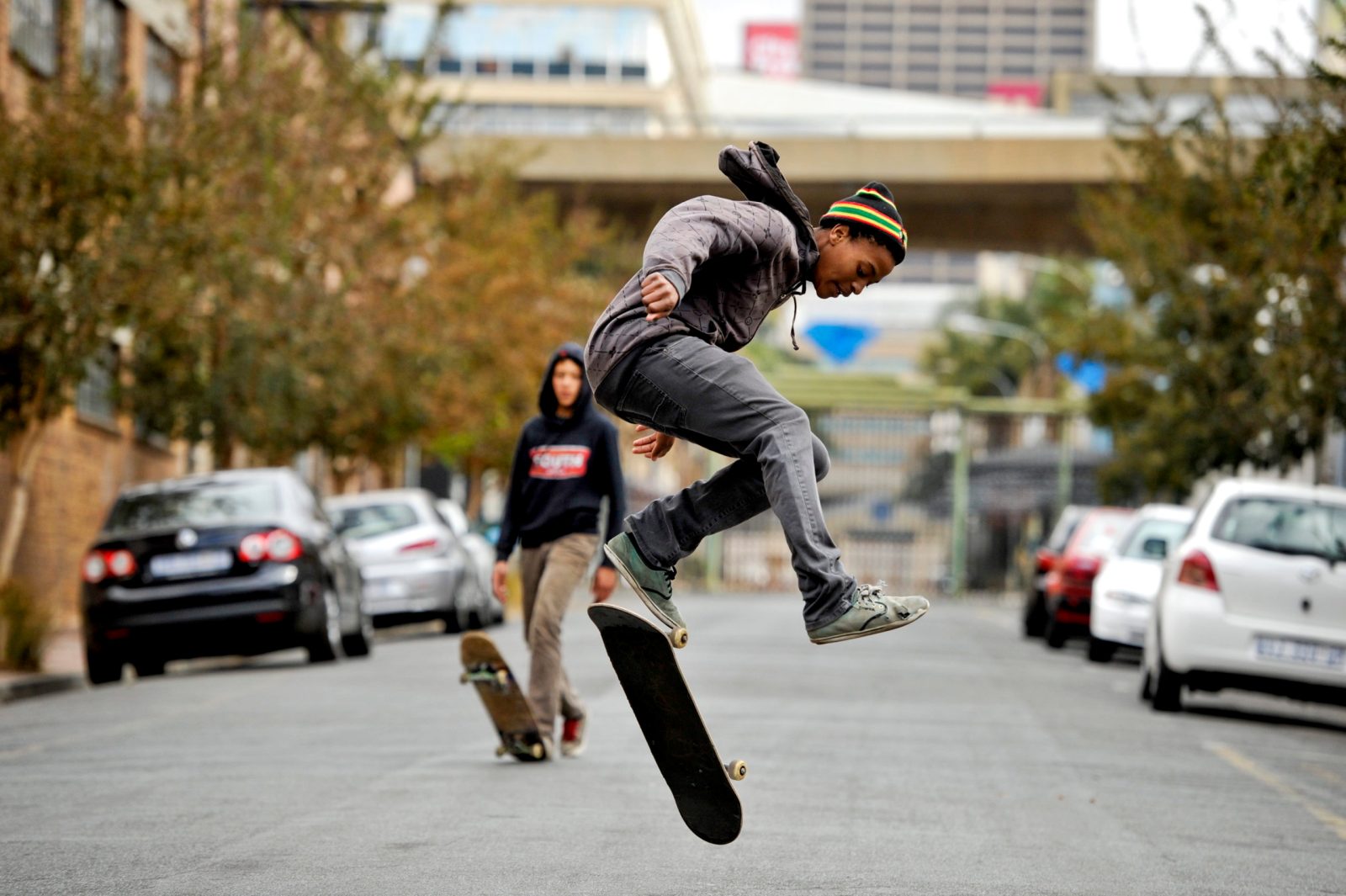 A young skater does a trick manoevre on June 20, 2012 in Johannesburg, South Africa. These children are part of the Nollie Faith skateboarding project that Zean Ferreira started for disadvantaged children in inner city Johannesburg. (Photo by Gallo Images / City Press / Herman Verwey)

It has its roots in the underground, founded by surfers; skateboarding continues to take over the world.

The sound of a skateboard’s wheels touching concrete is an oddly therapeutic sound. The wheels which are made of polyurethane, allow anyone on the board to move as swiftly as possible. It also gives anyone lucky enough to watch a skateboarder passing by the feeling the board, and the person on it, are hovering over the pavement, in slight levitation; in fact, the lightness of the wheels also make it easier to pull off tricks like a kickflip, a Caballerial, or a backside.

The remarkable sight of a skater in full flow and dressed in the clothing that’s popular in streetwear adds to the appeal of the sport. The athleticism of putting your body on the line by skating a rail at high speed or nailing tricks on a halfpipe might look easy to us viewers, but it takes hours of practise and years of persistence, patience and pain to execute smoothly, like the pros.

A UCLA study dubbed “About surfing and skateboarding youth subculture” explains that the sport’s roots are directly linked to surfing; indeed, skateboarding was originally called “sidewalk surfing”. “Those who outline the history of skateboarding suggest that it first appeared in the 1950s when surfers in California brought surfing to the streets”, the study says, adding that, “As a subculture, it has been described as a fusion of surfing, punk, street, hip hop, and hard rock. So, it is not surprising that skateboarders use many surfing slang terms but have adopted the rebel and hard edge image and clothing style from its other influences.”

And indeed, music, fashion and skateboarding often make for an inspiring creative trio; from Supreme – the American brand that was created in 1994 and which moved from a niche and underground label that catered for hip hop musicians and skateboarders to luxury – to American singer Pharrell Williams’s collaboration with IceCream Skate team, to Tyler the Creator who spearheaded the Odd Future group and worked with the international skate brand, Vans.

Vans South Africa Marketing Manager Warren Talbot talks about the rebellious or at times misunderstood nature of the sport.

“Skateboarding was always something that was frowned upon. People turned their noses up at it and maybe for these very reasons, mainstream culture has been drawn to the outsider nature of it, realising how the creativity and the culture of skateboarding can be used to create something new”, he says.

Luc Vermeer, a South African skateboarder, DJ and producer, who’s worked with electronic music group PHFAT and Christian Tiger School, agrees. “I think it’s always been so ‘anti-establishment’ and against the grain/mainstream… skating has birthed way more than just a supposed sport. It’s popular cos there’s so many different things about it to love without even liking skateboarding. Shoes, art, music…”

Beyond style, the sport was meant to make its debut at the 2020 Olympic Games in Tokyo for the first time in the history of the games. When it happens, skateboarding will be split into two categories – park and street. Street skating makes use of urban obstacles, like park benches, staircase rails and kerbs. Parks, on the other hand, are more purpose-built and have a variety of obstacles like half pipes, quarter pipes and ramps, as well as street skating elements like staircase rails. At the Olympics, both street and park events will have two rounds, preliminaries and finals.

A skater who was eager to represent South Africa in this year’s postponed games is Cape Town’s Jean-Marc Johannes. Johannes started skating at the age of 10 and recalls how difficult it was to access the sport: “Growing up in the Cape Flats, there weren’t many skate spots, but my favourite was a skatepark I would go to on the weekends in Claremont, Cape Town”.

Johannes also explains that he isn’t feeling discouraged over the postponement of the games. “I was not disheartened by it, the decision that was made was for the health and safety of the world. I am forever grateful that skateboarding is part of the Olympic Games,” he says, adding that he is now preparing for next year’s event, albeit mainly from home. “I think the preparation will differ for everyone. After having experienced Olympic-level events for the first time, I know exactly what needs to be done.”

Durban-based professional skateboarder, Khule Ngubane, who is also a rap artist, is Durban through and through: he grew up in Chesterville, an area where skateboarding isn’t the most popular sport. Ngubane’s first skateboard was bought by his grandfather at a local Toys R Us.

Ngubane explains that skateboarding also plays a major role in his creativity as a musician. “It influences my music a lot! Being a professional skateboarder, I travel all over. Which exposes me to different cultures and people from all walks of life. Then I get to write about what I see or the experiences in that country or city. It also gives me a broader sense of understanding humanity. Then catering as a musician to their vibe”, he says.

Indeed, the 26-year-old has come a long way from Chesterville and the Pavilion Mall skateparks. Skateboarding has not only given him the opportunity to travel and earn sponsorship deals with DC and Monster energy, it’s allowed him to give back to his community. Last year, Khule hosted a skateboarding outreach event called Back2theroots, in his hometown, with the aim of boosting the sport’s presence in the townships.

Talking about outreach, Skateistan is an initiative that was launched in 2008 by Oliver Percovich. Skateistan’s Jessica Faulkner says that the idea behind the organisation was sparked after Percovich travelled to Kabul, Afghanistan. “He skated the streets of Kabul and noticed that there were many streetworking children who were interested in his skateboard, so he started to run informal sessions in a disused fountain in the Makroyan area of the city. This attracted a wide range of people, from different ethnicities, genders and economic backgrounds,” she says.

“Skateboarding was new in Afghanistan, everyone was a beginner and this meant that no one had a head start. It helped to break down barriers. It also allowed girls to participate, which they were not allowed to do in other sports.

“This sparked an idea and (Oliver) registered Skateistan as an NGO in Afghanistan in 2008. In 2009, Skateistan opened its first indoor skate school in Kabul, a safe space where children could learn through a combination of skateboarding and creative education,” she adds.

In 2016, they launched the programme in South Africa, running outreach sessions in Johannesburg.

“There are lots of awesome skateboarding outreach programmes out there and we work with many of them through our programme, The Goodpush Alliance. Skateistan was the first NGO to combine skateboarding with creative education. Children come to the skate school for both, not just to skate. Our vision is to create future leaders for a better world and our creative education is focused around giving children the chance to explore the issues that are important to them and how they can be a part of making positive change… We don’t just build a skatepark and then leave. For us, it’s about getting embedded in a community and empowering local people to run the Skate School in the way that best serves their community,” says Faulkner.

In the words of American professional skateboarder Stevie Williams, skateboarding is indeed, “a poetry of motion”. DM/ ML