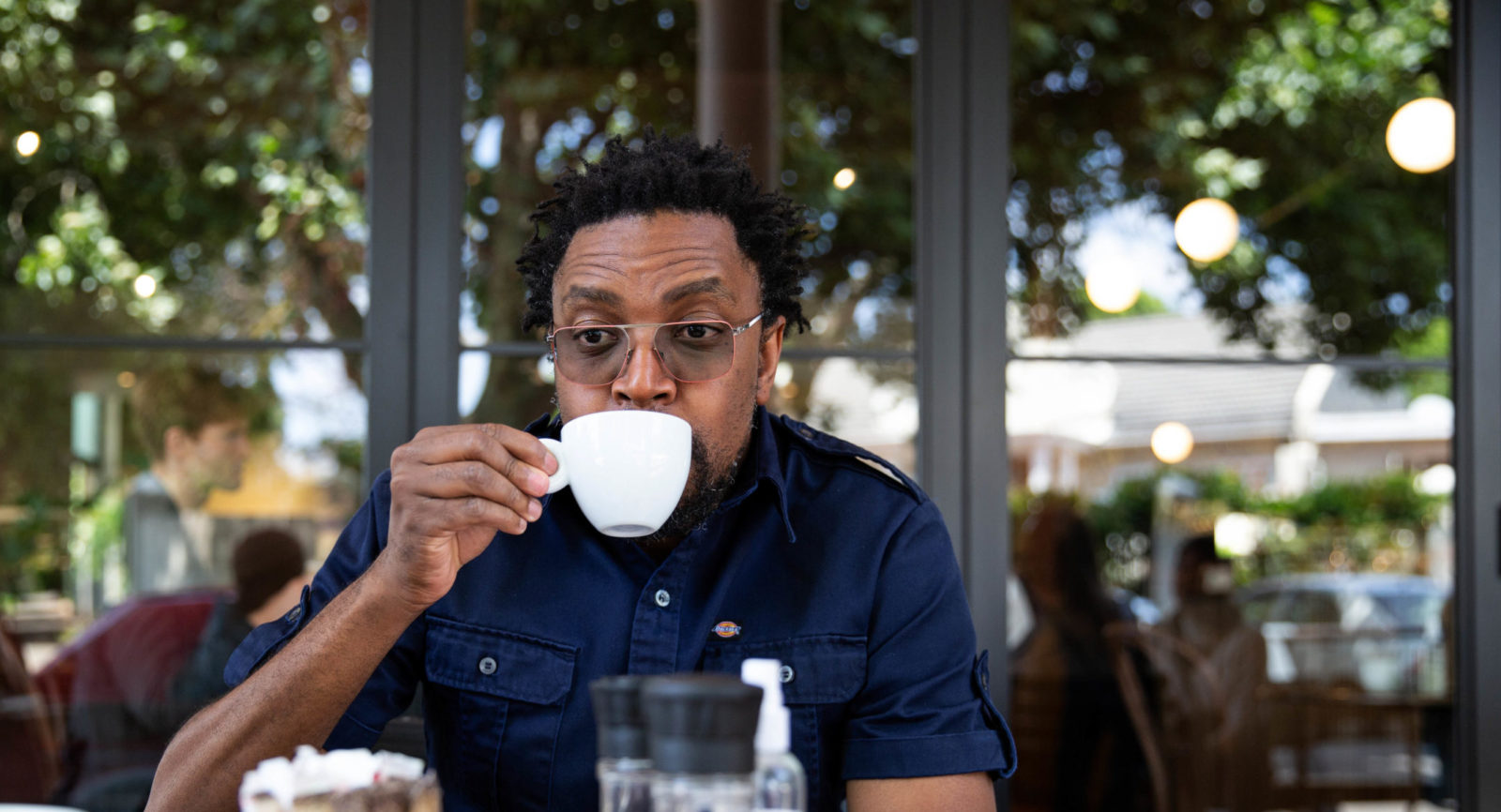 Writer-director-etcetera Kagiso Lediga chats about his ascension to king of the multiple hyphens. But despite his success, he still feels the pull of the stage.

Kagiso Lediga and his collaborators opened the door to the world of international streaming for African content, with a feature film and a season of prestige television on Netflix. (A second season is on the way.) But despite his rise as a writer/director/producer, the creator of Catching Feelings and Queen Sono still feels the pull of his roots — a stage, a microphone and a half a dozen laughs per minute.

“You get out of your art what you are willing to give up for it,” someone ruthlessly creative is once believed to have proclaimed. In Lediga’s case, he got out with “adrenal gland fatigue”. His doctor sent him home to rest, for half a year, as it turned out.

“Covid came at just the right time,” says Lediga. “I stayed in my pyjamas for six months, I wrote scripts in bed. This pandemic has been great!”

Following on the success of his 2017 romantic comedy Catching Feelings and a string of critically acclaimed comedy projects over almost two decades, Lediga and his partners at the award-winning production company Diprente found themselves with an open line to the commissioning team at Netflix.

The tech behemoth was looking to produce more high-end African content for its growing local audience, and Queen Sono fit the bill. In true Diprente style, it was pitched as a 30-minute comedy about a drunk and unruly lady spy. It morphed into a six-episode action thriller showcase starring Pearl Thusi, with major set pieces shot on location, a large cast, a pan-African focus and an enormous amount of pressure to represent the talents and capabilities of the continent on an international platform.

“We wanted to do [Queen Sono] properly, so everyone came to the party,” Lediga says. “South Africans are mad critical, but the world was also watching because it’s the first of its kind.

“So, every day, the adrenaline would start pumping at around 4 o’clock,” he continues.

“The whole day you’re sitting behind the monitor, taking it easy, trying out different lenses, ‘making art’. Then suddenly it’s 4pm and you only have an hour of sunlight left, and you’re running around like crazy.

“It was 51 days of that kind of stress,” Lediga says. It appears to have paid off: In April, Netflix greenlit a second season, set to begin shooting in the coming months.

Diprente has also optioned two South African works, one by the author and multidisciplinary artist, Phumlani Pikoli. The company has branched into children’s animations as Lediga’s horizons continue to widen.

He credits his innate ability for adaptation to the “comedy in his DNA”.

As a co-creator of the early 2000s comedy sketch hit, the Pure Monate Show, and a regular appearance at the Cape Comedy Collective — the “birthplace of standup in Cape Town” — Lediga was part of a group of young black talent building out a robust and noteworthy comedy scene in South Africa. In one way or another, he always found himself in the role of producer: shaping narratives, crafting storylines, protecting the collaboration’s vision, finding ways to get their shows to audiences.

“Where I really started to direct was on the Late Night News with Loyiso Gola,” says Lediga. “It was a low-budget show, and we were shooting at e.tv’s studios in Kew, which were shit.” The result looked less like a comedy show about the news than a news show with jokes, and the digital rotten tomatoes began to fly. Lediga put his salary towards a green screen, a multicamera TriCaster and a better digital workflow, and got a lot more hands-on in order to turn things around.

“The show eventually got two International Emmy nominations,” he says. “That gave me the confidence to make Bantu Hour and Catching Feelings, which I wrote, produced, directed and acted in. By the time it came out in cinemas it was already the first African Netflix original film, in the top 10 across 50 territories. “That opened the door,” he says.

The resulting opportunities have made for a sustainable business, even as film and television acquisitions have slowed to a trickle globally, thanks to the Covid-19 pandemic and lockdown. But aside from preparing to be back on set after an unexpectedly relaxed year, Lediga has one thing on his mind: his new standup show.

“I’m wary about the fact that I haven’t been on stage rocking sets for almost two years,” he says. “I’m still talking from nine to five over the phone, and people still seem to laugh. So, I think if I get up in front of a crowd again, I’ll be fine.” DM/DM168

What’s the image on your phone’s home screen?

Soft Gums from Woolies, the big packet. Not to share.

What’s the worst piece of advice you’ve ever taken?

Don’t charge, do it for exposure.

The thing you wished you learnt earlier in your life?

It takes a bit less time when you’re consistent.

Three books that have changed your life?

Haroun and the Sea of Stories, Fear and Loathing in Las Vegas, Hitchhiker’s Guide to the Galaxy.